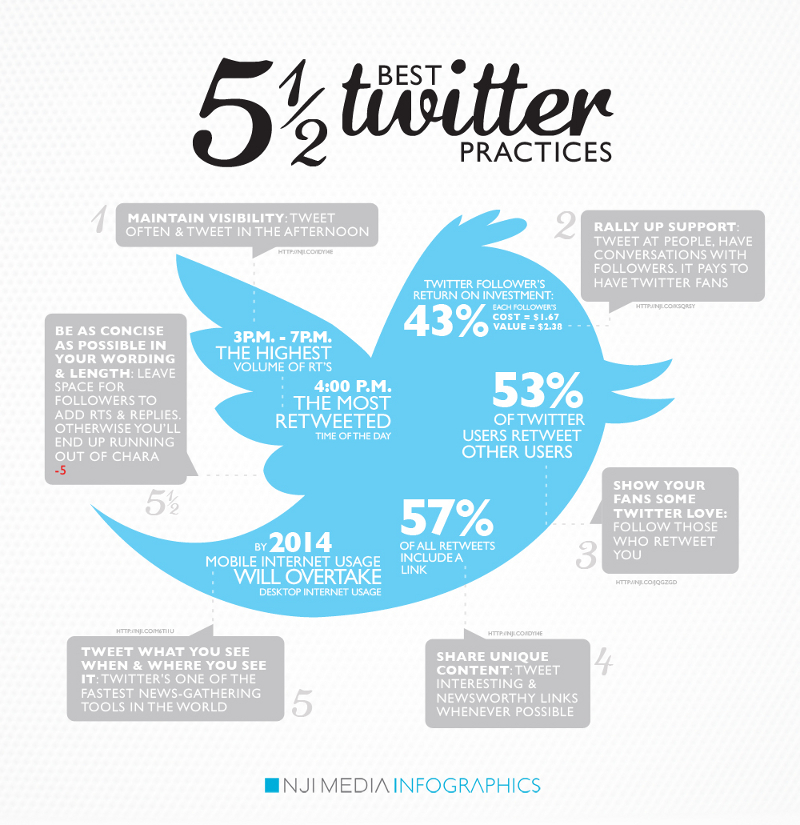 Twitter is a great marketing tool, but there is a certain etiquette that should be followed to make your social media efforts more effective.

You need to tweet often and preferably in the afternoon. Between 3 p.m. and 7 p.m. is when the highest volume of retweets is sent. At 4 p.m. is the most retweeted time of a day. You need to jump in at the right time to maximize the amount interaction and social mentions from your followers and to increase your following.

2. Rally up the Support

Spending all day sending random general messages won’t get you very far. You need to tweet at people as well. Starting conversations with your followers is a great way of interacting with your supporters. There is a great return on investment for each follower, so treat your fans with respect and communicate with them.

Twitter shouldn’t just be a one way street. Why not show some Twitter love by following others who regularly retweet your messages. Over half of Twitter users do retweet other users, which will increase your social reach.

A tweeter feed filled with generic and boring tweets won’t win you many fans. You need to share truly interesting or newsworthy links and messages as often as possible. This will separate you from the vast majority of other people on Twitter and your following will skyrocket.

5. Tweet What you See, When and Where you See It

Twitter has quickly grown into one of the world’s fastest news gathering resources. In fact by 2014 mobile internet usage is set to overtake desktop internet usage. So when there is something to share, don’t hesitate.

6. Be Concise and to the Point

Keep your tweets as short as possible, so that there is space for your followers to add retweets and replies. Very long tweets will result in running out of characters.

There you have. Apply these Twitter best practices and make your presence known in the Twittersphere.