#1. The sunglasses industry is dominated by just one manufacturer, which is called Luxottica. The company has its headquarters in Italy and over 500 million people around the world currently wear frames that the company manufactured. (Forbes)

#2. The eyeglasses industry is currently valued at $28 billion. Luxottica currently controls 80% of the major sunglasses brands, which allows it to dominate the industry. Safilo Group is the second-largest industry presence and they achieved just $1.33 billion in revenues. (Forbes) 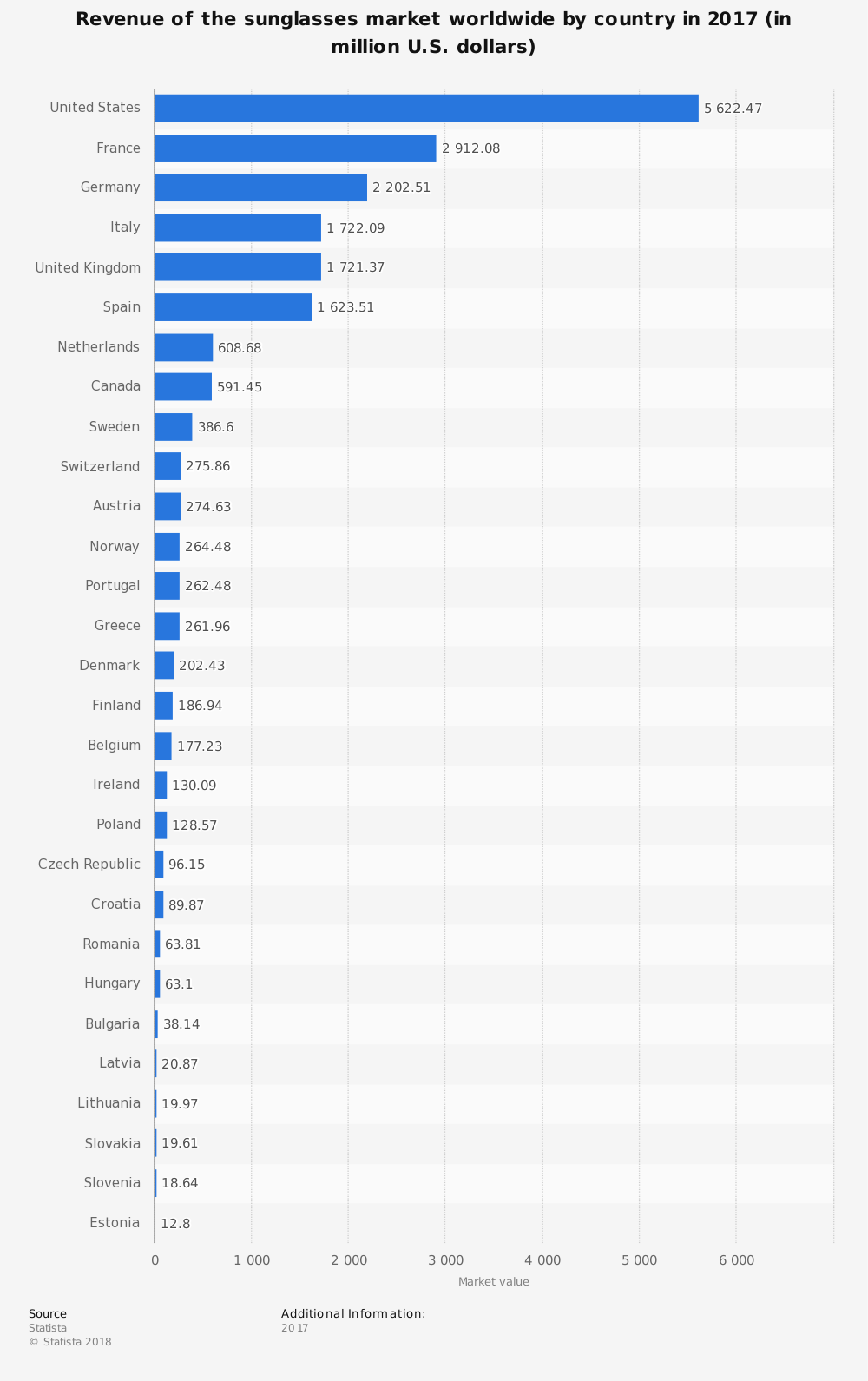 #3. Branding is a major component of the sunglasses industry. The average cost of a frame manufactured by Luxottica is $25, yet some brands, like Versace, Tiffany, Oakley, and Prada might charge over $500 for a pair of sunglasses. (Forbes)

#4. When frames and contact lenses are included with the revenues generated by sunglasses, the total industry value is $90 billion. (Forbes)

#8. Revenues generated in the sunglasses segment in the United States are forecast to reach $5.81 billion in 2018, which would be a 3.4% increase over 2017 figures. (Statista)

#9. Per person revenues achieved by the sunglasses industry in the United States in 2019 was $17.73, which is an increase of 2.6% over the year before. (Statista)

#10. There are currently 8,200 firms in the United States that classify themselves as a sunglasses store. These firms employ more than 46,000 people in direct opportunities. (IBIS World) 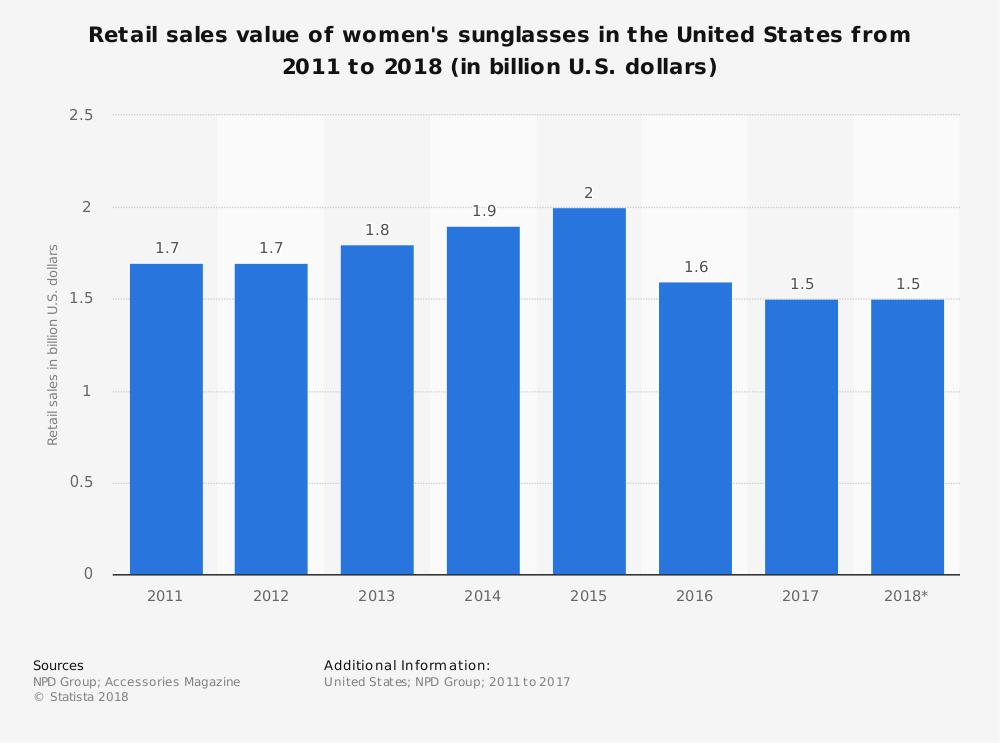 #11. Luxottica achieved a 76% market share within the United States in 2017 for the sunglasses segment of the eyewear industry. Safilo Group achieved a 5.1% revenue share with their second-place position. (IBIS World)

#12. For the vision care industry, sunglasses make up about 10% of the total revenues which are generated each year. (San Francisco Chronicle)

#14. Residents of the city of Seattle purchase about 50% more sunglasses per person than the national average in the United States. Residents of Seattle are ranked third in the country, behind New Orleans and San Diego, in the purchase of Ray Bans. (The Seattle Times)

#15. Luxottica currently offers wholesale distribution of sunglasses in 150 countries, through a network of 50 subsidiaries and 100 independent distributors. (Cornell University)

#17. There are currently 6 plants in Italy which are involved in the manufacturing of frames for Luxottica, with additional plants located in Brazil, China, and California. The company is able to produce over 270,000 frames per day, with over 40% of the output originating from Italy. (Cornell University)

#18. Safilo Group also has 4 manufacturing plants that are located in Italy, along with plants in China, the U.S., and Solvenia. It produces just 30% of the volume that it is able to sell each year. (Cornell University)

#20. Over 100 Solstice sunglass retail stores in the United States are directly operated by the Safilo Group. (Cornell University) 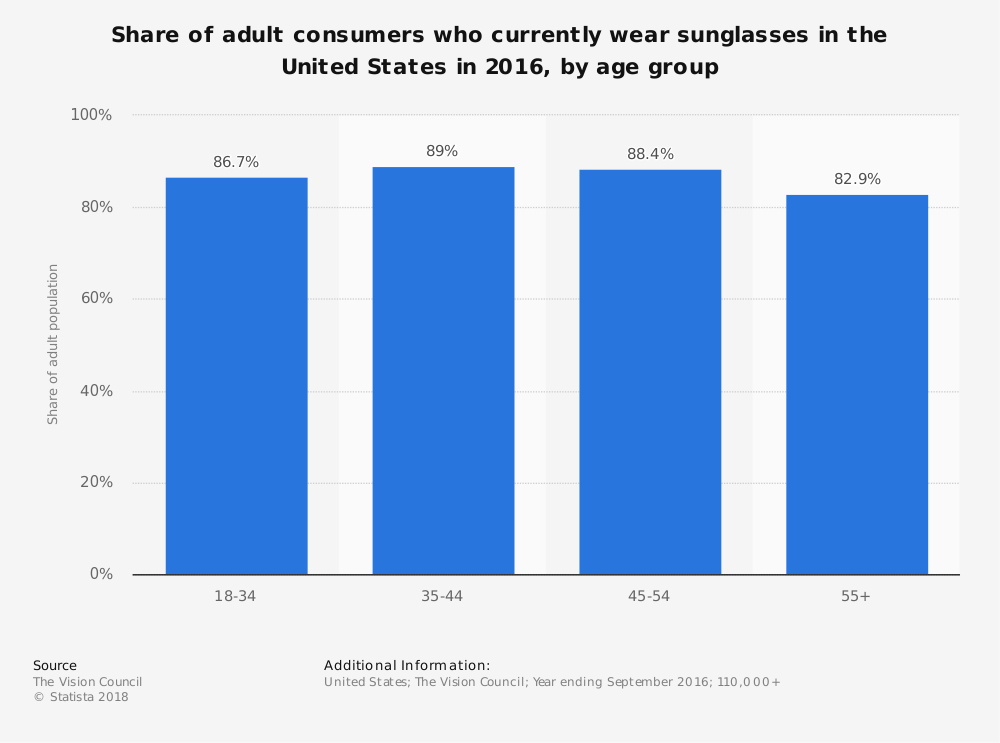 #21. The median price for a pair of sunglasses is highly dependent upon the brand selected by the consumer. Men who purchase Dior branded sunglasses pay more than $500 per pair, for example, while men purchasing Armani sunglasses pay about $100 per pair. (Cornell University)

#22. Women pay even more for sunglasses. The average price of a Dior branded pair of sunglasses sold in the U.S. is $600. In comparison, women purchasing Vogue sunglasses pay about $100 per pair. (Cornell University)

In the United States, the CAGR may be slightly lower, in the 3% to 4% range. Because the U.S. segment produces a majority of the global revenues for the sunglasses industry, however, the most exciting opportunities for growth come from developing markets in the Asia-Pacific region.

Luxottica will continue to dominate the industry, with forecasts placing their revenues at 70% minimum through 2030, even with the presence of disruptors. Because Luxottica controls most of the in-demand branding for the industry, they continue to control most of the revenues. Only a shift in preference will alter this landscape and that type of action is not projected to happen.