Dairy products are not usually the first thing that someone thinks about when considering Chinese cuisine. Despite the fact that milk production is not always associated with China, the industry is the second-largest consumer of milk and dairy in the world, along with being the third-largest producer of dairy products.

Evidence of a dairy industry being present in China dates to the 12th century. The industry began to formalize in 1900, however, when Western cattle breeds were introduced to China. Holsteins were up to 4 times more productive with milk than the native Yellow Cows in the country, leading to higher levels of investment for local farmers.

Even when there was government upheaval in China, with the founding of the PRC in 1949 and the eventual cultural revolution which followed, investment and development into dairy and milk products continues.

#1. In 2016, China had 8.5 million cattle in milk production. The national herd was able to produce 38 million tons of milk products. (U.S. Department of Agriculture [USDA])

#2. Over 50% of the dairy farms operating in China operated at a loss during 2016. Up to 70% of the fluid milk that is produced by the Chinese milk industry comes from large-scale dairy farms. (USDA) 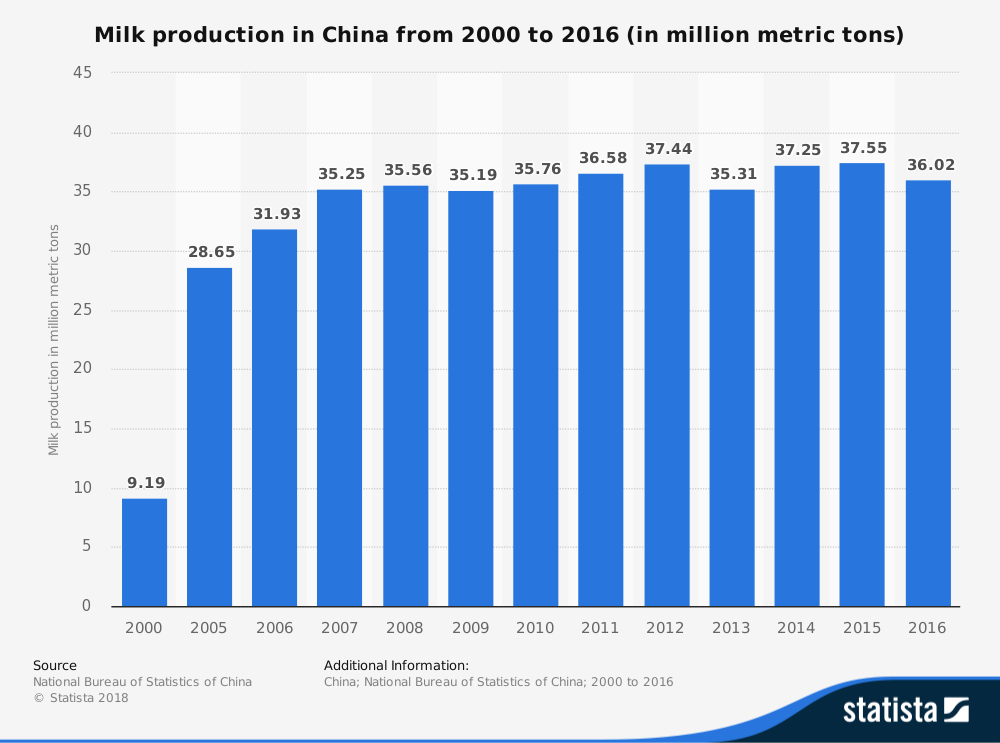 #3. In 2016, estimates indicate that the total dairy herd population numbers in China were reduced by up to 10% due to small farms closing operations and large operations culling their herds. (USDA)

#4. New Zealand and the European Union together make up 97% of the imports that are created by China’s milk industry each year. (USDA)

#5. Domestic dairy consumption in China is much lower, per capita, than it is by international standards. The average person in China consumes about 33kg of dairy products each year, which is about 30% of the global standard. (USDA)

#7. The United States imports less than 1% of the overall market share that is produced by the milk industry in China each year. Two factors cause this issue: new food safety regulations in the U.S. and registration regulations in China that can take several years to complete. (USDA)

#9. 110 firms operating with the industry were officially declared to be “unprofitable.” Reasons for expanding losses include higher white sugar costs, higher freight costs, and a larger volume of inexpensive imported dairy products. (Reach24H) 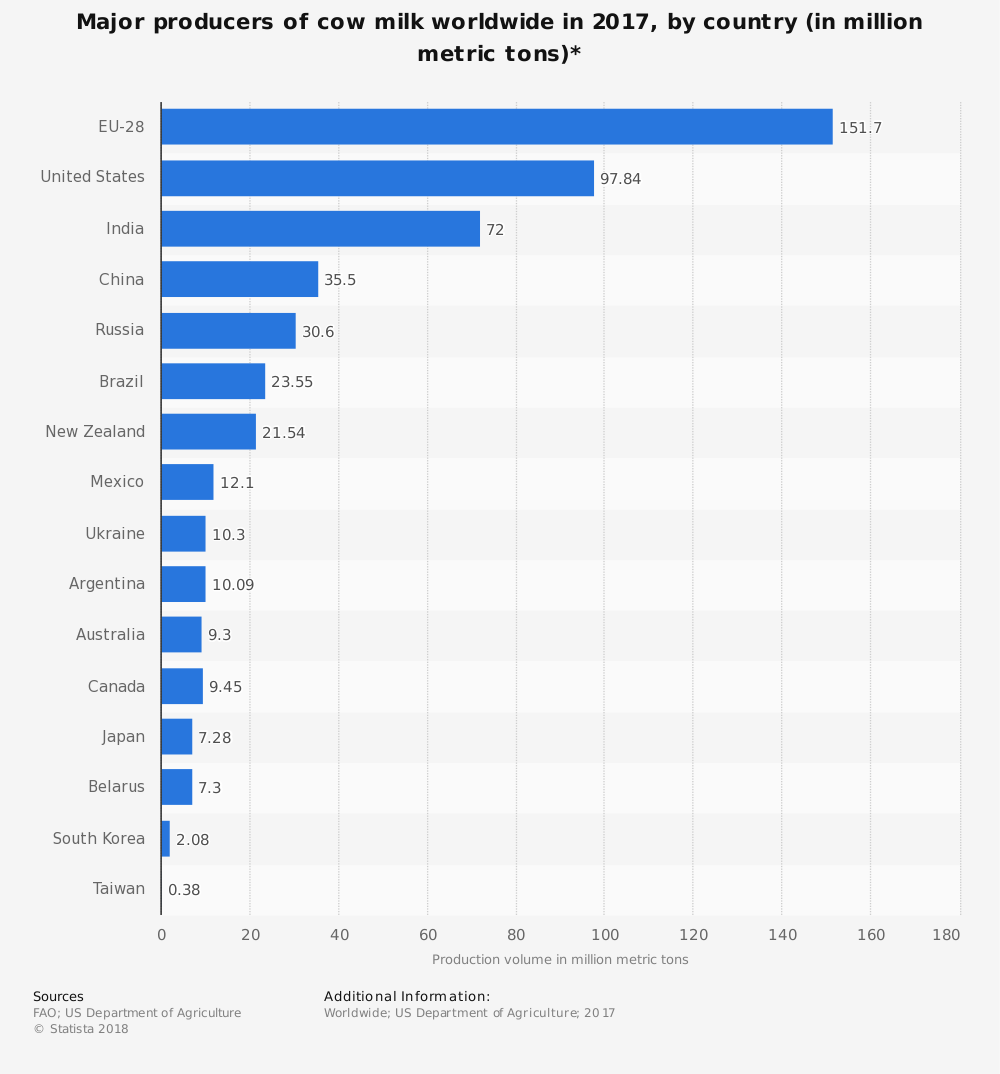 #11. Just 9 provinces in China, including Jiangsu, Sichuan, and Hubei, which are not part of the primary dairy regions of the industry, were able to achieve more than 1 million tons of liquid milk production in 2017. (Reach24H)

#13. Over 50% of the imported whey powder that was needed by the Chinese dairy industry came from the United States. Over half of the imported cheese brought into China originated from New Zealand. (Reach24H)

#15. 47% of the cattle herd present in China that supports the milk industry involves farms with 100 or fewer head. About 19% of the industry is supported by dairy farms which have 1,000 or more head of cattle. (Statista) 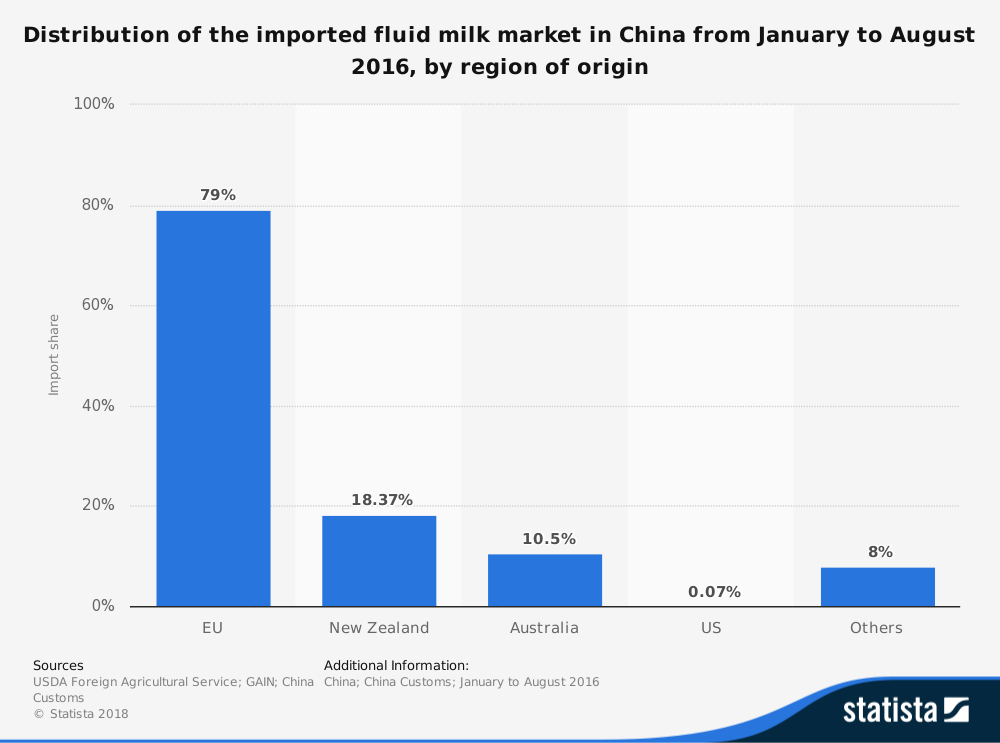 In 2008, the milk industry in China took a major hit when 6 children were killed because of the presence of melamine in the supply chain. Thousands of others were sickened. Changes implemented by the Ministry of Agriculture, along with new regulations and inspections, have helped domestic consumption levels to begin returning to pre-2008 levels.

Consumption of dairy is rapidly growing in China, making it a dynamic market for local producers. The desire for cheap dairy products has also created an influx of imported milk-based items that have challenged local producers. Imports are still cheaper in many areas than domestically-produced milk items, which has caused the industry to struggle.

There are areas of success to find within the China milk industry. Domestic companies hold majority market shares for drinkable dairy products, shelf-stable yogurt, and in fresh products.

Through at least 2025, the expectation is that about 75% of the dairy products which are consumed in China will continue to come from domestic sources. The European Union and New Zealand will continue to dominate the export markets for the industry, with Australia playing a minor role as well.

The industry will continue to shift away from small producers to take advantage of pricing benefits when milk is produced on a large scale. Imports will continue to be necessary. Growth, however, is still very possible.