Apartheid finally came to an end in South Africa in 1991. The institutionalized discrimination, segregation, and racism created class separations with distinctive levels of income inequality. Meat consumption in South Africa was often confined to the very rich or to what a family could find while legally hunting.

Since 1991, the South African meat industry has been able to benefit from the higher income levels and preference for societal equality. People are earning more, with 70% of the population identifying themselves as being a middle-class household. With more income comes more meat consumption.

Because of the shifting nature of the consumer base in South Africa, unique trends have begun to develop. Fresh meat sales have become a priority. Poultry has become a top preference, especially when it is a fresh cut. There are other unique statistics that prove the growth trends for meat consumption are more than just a fad as well.

#1. In South Africa, there are about 2.9 million tons of beef, pork, and poultry that are consumed every year. About 60% of the total meat consumption in South Africa involves poultry. (USDA Foreign Agriculture Service)

#2. Local production of animal proteins in South Africa is about 2.4 million tons each year. To supplement the additional requirements, the industry brings imports in from Brazil, Germany, the United Kingdom, and the Netherlands. (USDA Foreign Agriculture Service) 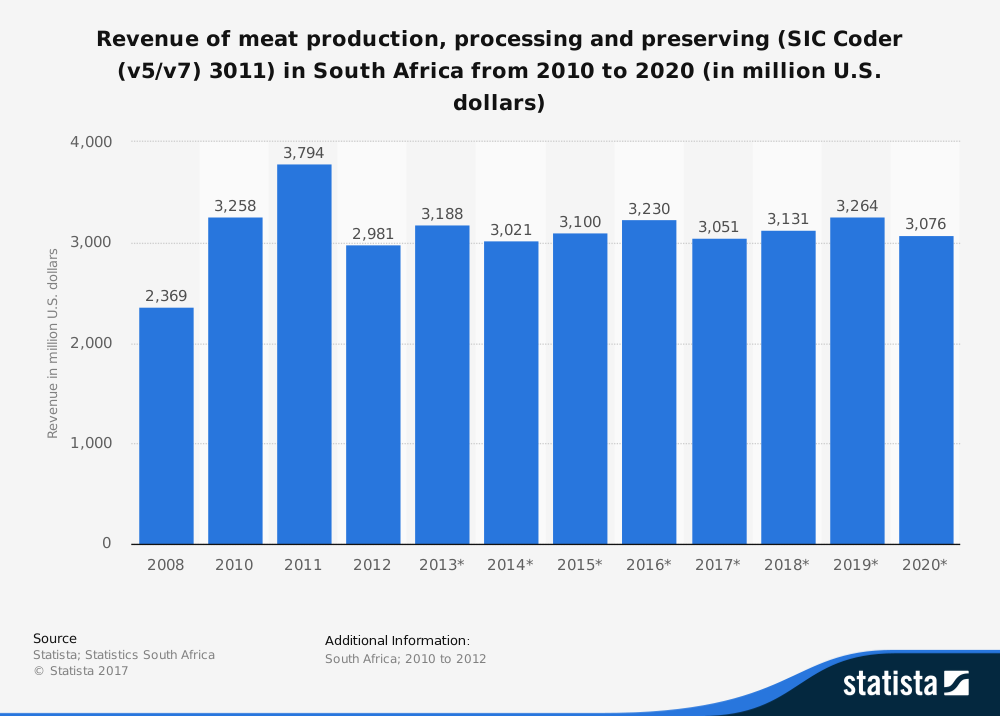 #3. The United States does not supply the South African meat industry with products because of sanitary restrictions and anti-dumping duties. (USDA Foreign Agriculture Service)

#5. Between 2004-2014, the number of adults in South Africa that were classified as “poor” decreased by 80%. At the same time, there was a 55% increase in total income. This resulted in a preference for added meat items in the local diet. (USDA Foreign Agriculture Service)

#9. In the red meat market, beef has been the primary cut of choice. Other products, such as mutton, goat, and lamb have seen little sales growth. Each has averaged a 1% increase in their category. Pork is also quite unpopular, with religious, societal, or quality objections leading to depressed sales. (Food Stuff South Africa)

#10. About 2.5% of the population of South Africa comes from India. Because their religious preferences forbid the consumption of beef, their emphasis on lamb and mutton helps to drive the sales of these products for the local meat industry. (Food Stuff South Africa) 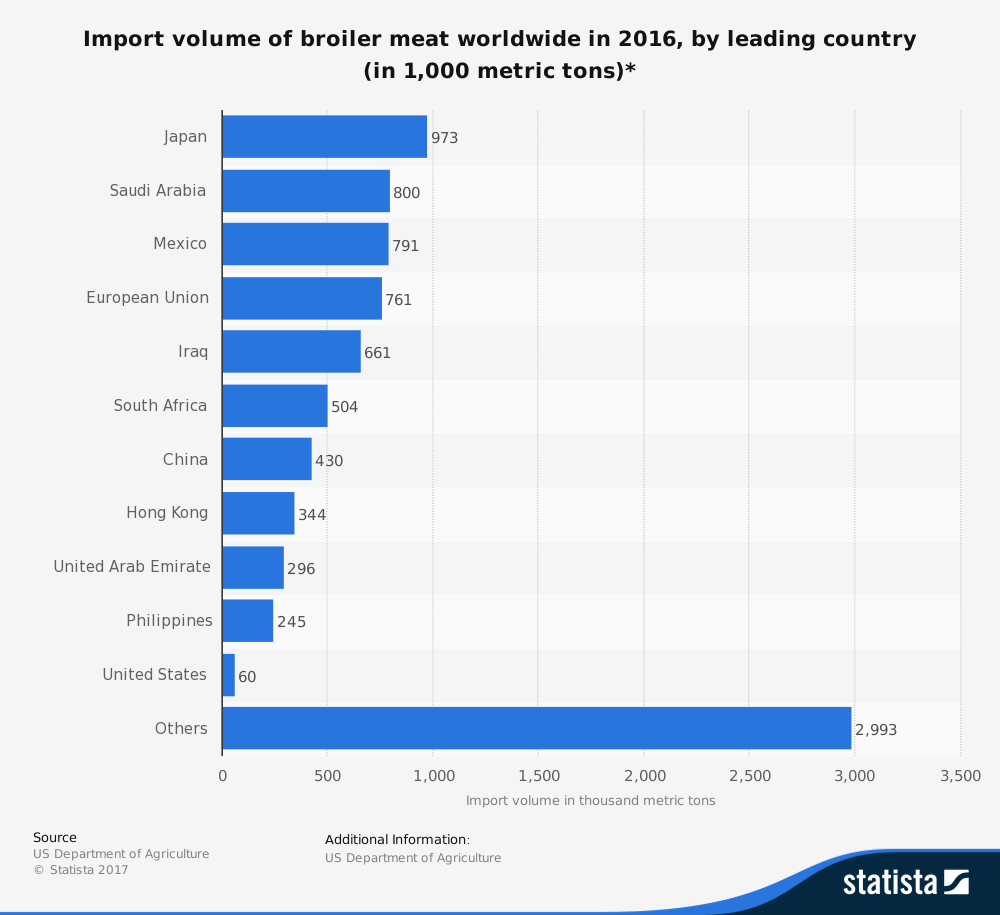 #11. Two large producers have most of the broiler meat market in South Africa: Astral and Rainbow. Along with the smaller producers, about 1 million broiler chickens are produced for the meat industry every week for consumption. (Food Stuff South Africa)

#12. There are over 1,700 subsistence farmers that supplement what the South African meat industry is able to provide each week. These farmers produce about 500 living chickens for sale every week at local markets in the country. (Food Stuff South Africa)

#13. Most consumers in South Africa prefer to shop for their meat at a supermarket or grocery store. Frozen meats are considered a second-tier product. The organic industry is almost non-existent in South Africa, so it is quite expensive and tends to be reserved for the wealthy class only. (Food Stuff South Africa)

#14. About 80% of the land that is designated for agricultural activity in South Africa is dedicated to stock grazing. There is an 80/20 split between meat farming and dairy farming within the cattle industry. (RSA Department of Agriculture, Forestry, and Fisheries)

#15. Livestock production in South Africa increased from 13.5 million head in 2004 to 13.87 million head in 2011, even though grazing areas gradually declined. (RSA Department of Agriculture, Forestry, and Fisheries)

#16. About 60% of the available cattle in South Africa are owned by commercial farmers. The gross value of cattle and calves for the meat industry has risen from just over R$4 billion in 2001-2002 to over R$14 billion in 2010-2011. (RSA Department of Agriculture, Forestry, and Fisheries)

#17. The majority of beef production in South Africa occurs in Mpumalanga, which is responsible for 23% of the market. The provinces of Free State, Gauteng, KwaZuluNatal, and North West all have a 10% or greater market share in beef production as well. (RSA Department of Agriculture, Forestry, and Fisheries)

#18. Commercial farmers in South Africa employ about 50,000 workers annually. Emerging farms employ another 240,000 people, while communal farmers employ up to 3 million people. Just about the entire population of South Africa is dependent, in some way, on the South African meat industry for job supports. (RSA Department of Agriculture, Forestry, and Fisheries)

#19. More than 150,000 kg of beef are exported from South Africa each year as well. 73% of those exports go to Mozambique. (RSA Department of Agriculture, Forestry, and Fisheries) 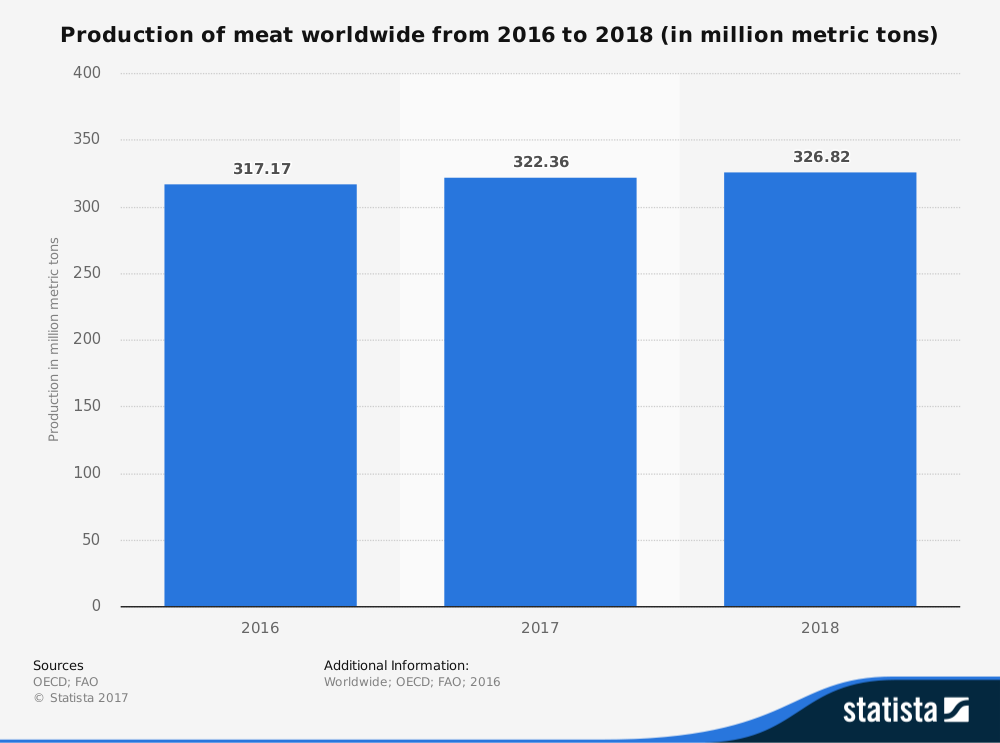 As income levels continue to rise in South Africa, the preference for meat products from local sources will continue to increase. This may result in increased pricing at the store. The meat industry will benefit from the higher demand by being able to refine processes, find cost savings, and work toward providing more organic options.

Although apartheid is over, most commercial farmers are still white and the communal farmers tend to be of diverse racial profiles. Commercial farming tends to provide the highest revenues, but an emphasis on organic farming practices with communal agriculture could create a valuable niche within the South African meat industry that is greatly needed.

Imports will still be needed as local consumption continues to surpass local production. Over time, however, these two figures will likely equalize and that means there is a huge potential for growth in the industry in coming years.