Aluminum production may be a relatively modern industry for the rest of the world, with production ramping up in the 19th century after Humphry Davy discovered that it could be created through an electrolytic reduction from alumina. In China, the history of aluminum is a little different.

Over the years, several different processes have been used to create aluminum from ore. After World War II, when industry and manufacturing grew in China, it would once again move to become the global producer of aluminum, just as it likely was in our ancient history.

#1. The primary production volume of aluminum in China each year is 31.9 million metric tons. The industry is the largest producer of aluminum in the world today. China is also the leading country for casting production. (Statista)

#2. The Chinese aluminum industry produces more than 2.3 million tons of aluminum per month. In 2017, the industry grew by 1.6%. (Reuters) 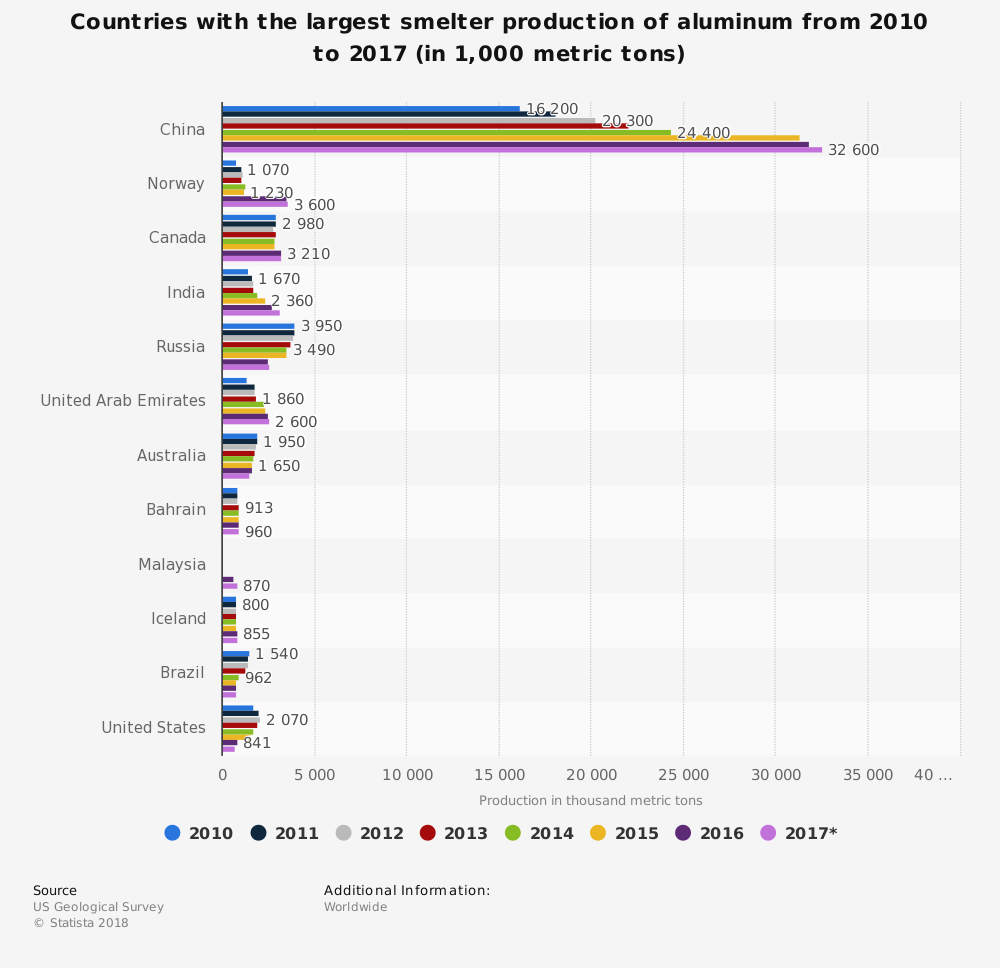 #3. Air pollution concerns have created capacity problems within the Chinese industry as of late. In November 2017, about 30% of the industry was forced to shut down or change their processes to conform to new pollution standards. That caused output to fall 7.8% from the month before. (Reuters)

#4. In 2017, nonferrous production within the Chinese aluminum industry was 53.78 million tons. That figure is 3% higher than what the industry achieved in 2016 and represents a new annual record for the industry. (Reuters)

#5. Aluminum ore mining in China is an industry segment which produces about $6 billion in economic impacts each year. For the 5-year period ending in 2017, the industry grew at an annualized rate of 10.1%. (IBIS World)

#6. There are about 400 firms currently active in the aluminum ore mining segment in China. They are responsible for the direct employment of about 20,000 people. (IBIS World)

#7. Chalco, which is the second-largest producer of aluminum in China, announced a 25% drop in sales from the year before in 2016. Oversupply continues to be an issue within the industry, which is adding production and smelting capacity despite depressed pricing because of the extra supply. (Bloomberg)

#9. In 2016, the Chinese aluminum industry imported 40,000 tons of high-end aluminum thick plates. About half of those plates were imported from the U.S. at a value of $6,291 per ton. Chinese origin plates of the same quality, when imported to the United States, have a value of $2,413 per ton. (U.S. Department of Commerce)

#10. Since 1957, the growth of the Chinese economy is highly correlated with increased levels of domestically consumed aluminum. From 2007-2016, China achieved a 10% annual growth rate in their GDP. At the same time, the Chinese aluminum industry experienced a 15% rate in domestic consumption. (U.S. Department of Commerce) 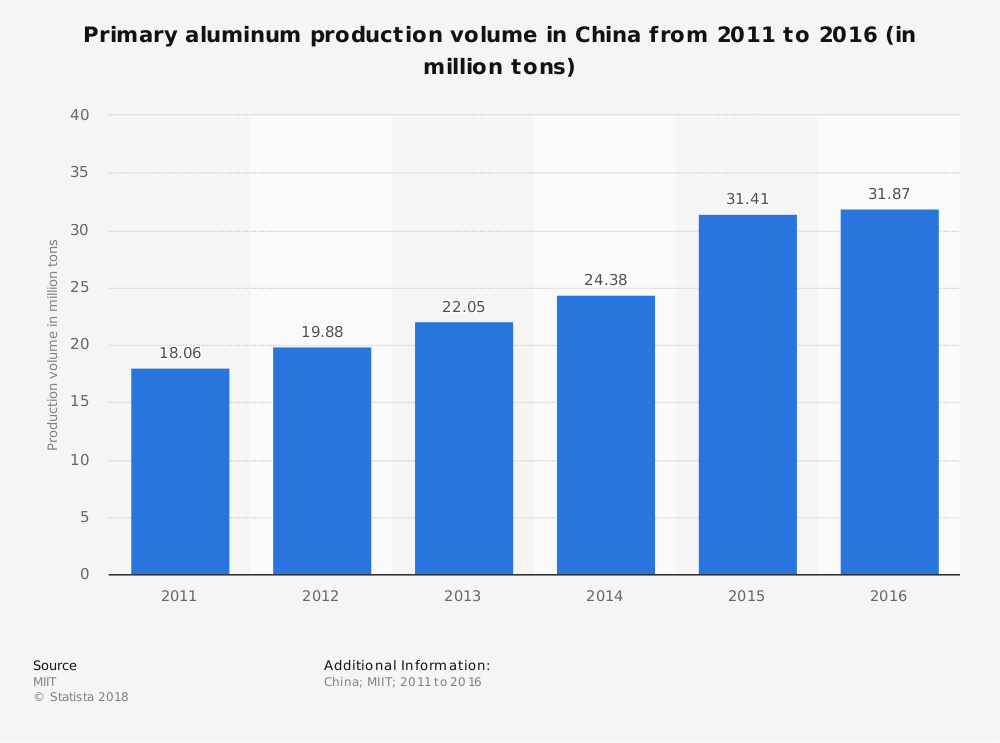 #11. The United States accounts for about 14% of the aluminum exports that generate revenues for the Chinese aluminum industry. (Reuters)

#12. Since 2006, the government of China has imposed a “temporary” tariff of 15% on exported primary aluminum. Because of that tariff, the Chinese aluminum industry has become a net importer of primary aluminum, averaging a difference of 2.16 million tons annually. (U.S. Department of Commerce)

#15. From 1996-2016, the aluminum industry in China acquired equipment and technologies valued at more than $70 billion to boost the development of better manufacturing processes. (U.S. Department of Commerce)

#17. In August 2017, the price of aluminum at the Shanghai Future Exchanges closed at $2,465 per metric ton, which was its highest price in nearly 5 years at the time. (China Daily)

#19. The Chinese aluminum industry accounts for 53% of the global total output of 58.89 million tons of electrolytic aluminum produced each year. (China Daily)

China will continue to be a global leader in the production of aluminum. Political pressures and a changing economy may destabilize the industry in some ways, though these issues are generally temporary in nature.

There is also the possibility that changing political climates may have zero impact on the aluminum industry. In March 2018, the United States imposed a 10% tariff on aluminum imports from China, along with a 25% tariff on steel. The next month, the unwrought aluminum and industry product exports were 451,000 tons which was up 0.2% from the month before, and 4.9% higher than the year before.