The wine industry in South Africa got its start because of the Dutch East India Company. They established an outpost in Cape Town, which was a stop on one of the primary shipping routes at the time. Wine production was started to support the crews of the ships passing through. The first successful wine made in South Africa was bottled in 1659.

In 1972, the Wine of Origin Scheme was introduced to the South Africa wine industry. The goal was to recognize and protect the qualities of wine that came from certain areas, specific grape varieties, or certain vintages.

Wine production remained steady in South Africa until the policies of apartheid created trade embargos with the country. In 1990, fewer than 30% of the grapes produced in the country were used to make wine. Most were either sold as table grapes, used to make brandy, or were just thrown away.

When sanctions were removed in 1994, wineries were one of the first industries to rebound from the economic surge. Over the next 20 years, the industry would shift away from boutique producers to work with large-scale producers, dropping total producer numbers while leaving planted acres mostly unaffected.

#1. The annual harvest of grapes in 2016 resulted in 1.4 million tons, of which 82% was directed toward the South Africa wine industry. (Wines of South Africa)

#2. About 3,000 vintners are currently involved with the wine industry in South Africa. Together, they take care of more than 94,500 hectares of land that is currently under vines. (Wines of South Africa) 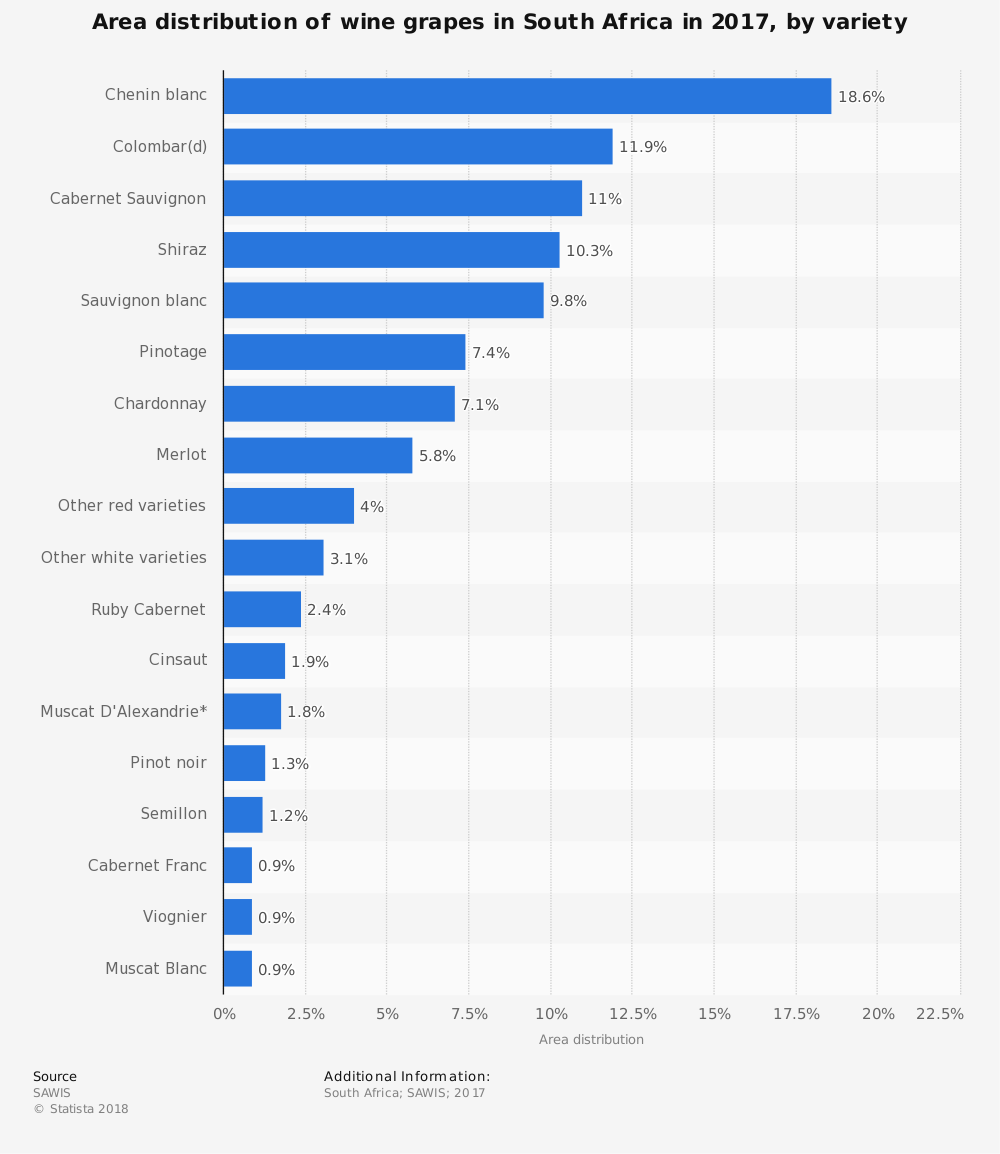 #3. About 300,000 people receive direct or indirect employment support because of the actions of the wine industry. (Wines of South Africa)

#5. The South Africa wine industry currently provides 3.9% of total international wine production. That places the industry seventh in the world, according to 2016 figures. Italy was the largest producer, with a 19.1% share. They were followed by France (16.3%) and Spain (14.7%). (Wines of South Africa)

#6. Although the number of wine cellars which crush grapes has remained relatively stable since 2005, the number of primary grape producers has declined dramatically. In 2005, there were 4,360 producers, compared to the 3,145 producers in 2016. (Wines of South Africa)

#7. The number of uprooted vineyard hectares in South Africa rose dramatically in 2016, with over 5,000 hectares affected by the process. (Wines of South Africa) 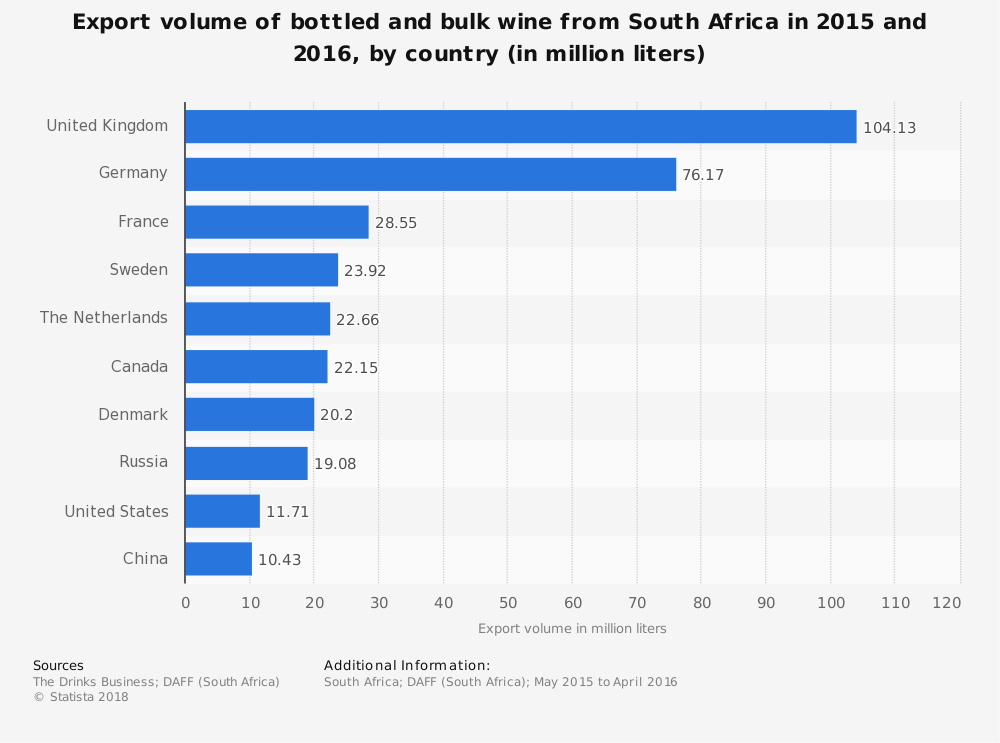 #11. Natural/Still wine is the most common import for the South African industry, with 16 million liters imported in 2015. About 575,000 liters of sparkling wine was also imported. (Top Wine South Africa)

#13. Just 13% of grape producers in the wine industry were farming at sustainable income levels in 2016. Another 44% of producers were operating at a break-even rate. (Vinpro)

#14. In 2016, the average return on an investment at the producer level was below 1%, driven by prolonged drought occurring in certain regions of South Africa. Issues with cost inflation and stagnant wine pricing affected the industry as well. (Vinpro)

#15. About 40% of the vineyards in South Africa have been replanted in recent years. This has created a shift in the industry from about 80% white grapes to a 50/50 split between white and red grapes. (Wines of South Africa)

#16. Global consumers pay 4 times more for a bottle of wine that came from South Africa compared to what domestic consumers pay. (CNN)

#17. In 2016, exports to China rose by more than 40%, even though it didn’t make the list of top export destinations for the industry. (CNN)

#18. The revenues generated by the wine industry in South Africa contribute about 2% to the national GDP each year. (CNN)

Improved production methods are helping the wine industry in South Africa stabilize. Instead of focusing on boutique producers, large-scale wineries are creating growth for the industry even when the number of participants has been steadily declining for more than a decade.

Wine tourism currently generates about R6 billion in revenues each year for South Africa. The ethical accredited volume of the wine industry was 48% in 2016, with a goal of reaching 100% by 2025. 20% of the value achieved by the industry comes from the export market, with 11% of exports going to new markets each year.

At the same time, domestic sales of wine have risen by more than 14% since 2014. The value segment of the domestic industry is particularly strong, with 80% of local wine volumes being sold at R26 or less. Just 5% of volume is above R65 per liter.

That means the greatest threat to the industry is the weather. Changes in weather patterns have reduced water availability in many regions of South Africa. If that pattern continues, even vineyards with consistent production levels will experience declines, which will have a negative impact on the industry. If things stay consistent, however, then the industry looks poised to continue growing its overall value.