The first plastic bottle was offered commercially in 1947. The technologies involved in plastic manufacturing made these first bottles be initially more expensive than other options on the market. It wouldn’t be until the 1950s, when heavy-duty polyethylene was used for bottles, that the manufacturing sector began to take off with this product.

Because plastics have a superior advantage to glass bottles when comparing breakage, for production and transportation, almost all beverages in the U.S. have replaced glass bottles with a plastic counterpart.

#1. Revenues from the manufacturing of plastic bottles in the United States total $13 billion per year. From 2012-2017, the industry has been contracting, losing 0.9% on average, per year, in total revenues generated. (IBIS World)

#2. About 460 firms are currently engaged in the manufacturing of plastic bottles in the United States. They directly support more than 30,000 employment positions. (IBIS World) 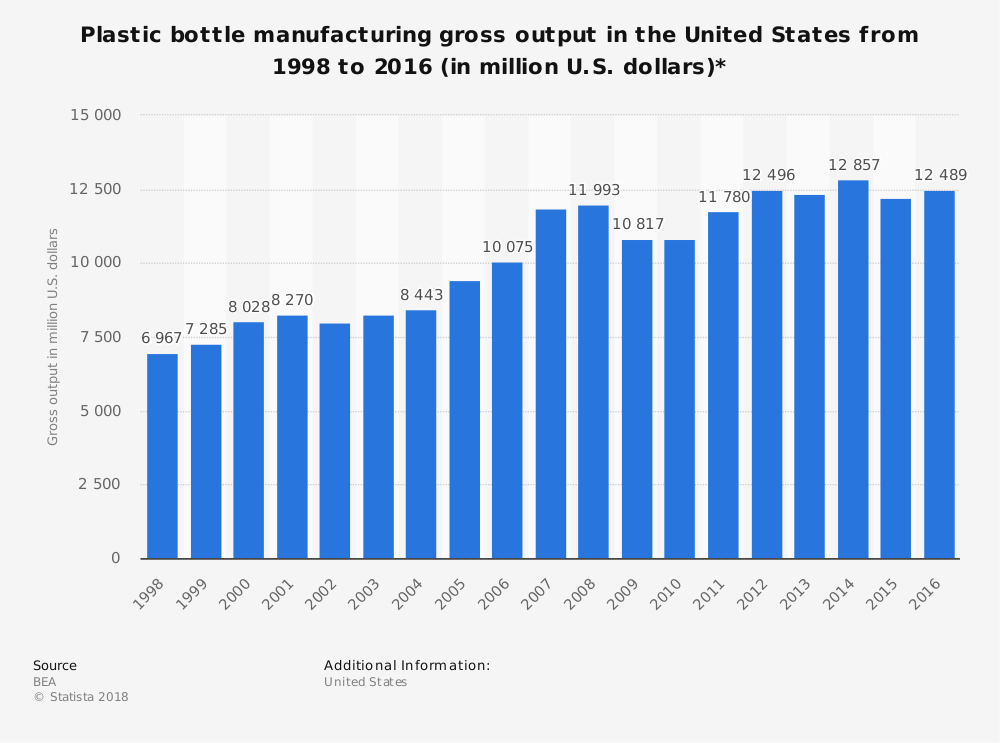 #3. In 2016, there were about 485 billion polyethylene terephthalate (PET) bottles that were manufactured globally. (Statista)

#4. Most plastic bottles are derived from fossil feedstocks, such as coal, crude oil, or natural gas. About 4% of the crude oil that is produced in Europe is employed in the production of plastic materials, including bottles. (Plastics Europe)

#5. Over 1.5 million jobs are available in Europe because of the plastics industry. About 60,000 companies are currently operating in this sector, with most of them being small- to medium-sized businesses. (Plastics Europe)

#6. In the United States, about 50 billion plastic bottles were used for water in the last year. The recycling rate of these bottles is just 23%, which means over $1 billion in plastics are wasted every year. (Fast Company Magazine)

#7. 24% of the bottled water that is sold in the United States comes from either Aquafina or Dasani brands. Both types of water are purified municipal water. (Fast Company Magazine)

#8. Although PET bottles are considered to be safe to use, the plastics can contain antimony. In small doses, it is known to cause symptoms like dizziness. In larger doses, it may cause vomiting or lead to life-threatening symptoms. (Royal Society of Chemistry)

#9. It requires about 17 million barrels of crude oil to meet the demand for plastic bottles that hold water for consumers. That is the same amount of crude oil that would be required to refine fuels for 1.3 million cars to operate for a year. (Pacific Institute)

#10. In the past 12 months, the average American consumed 167 disposable plastic water bottles. They recycled an average of 38 of them. (Fast Company Magazine) 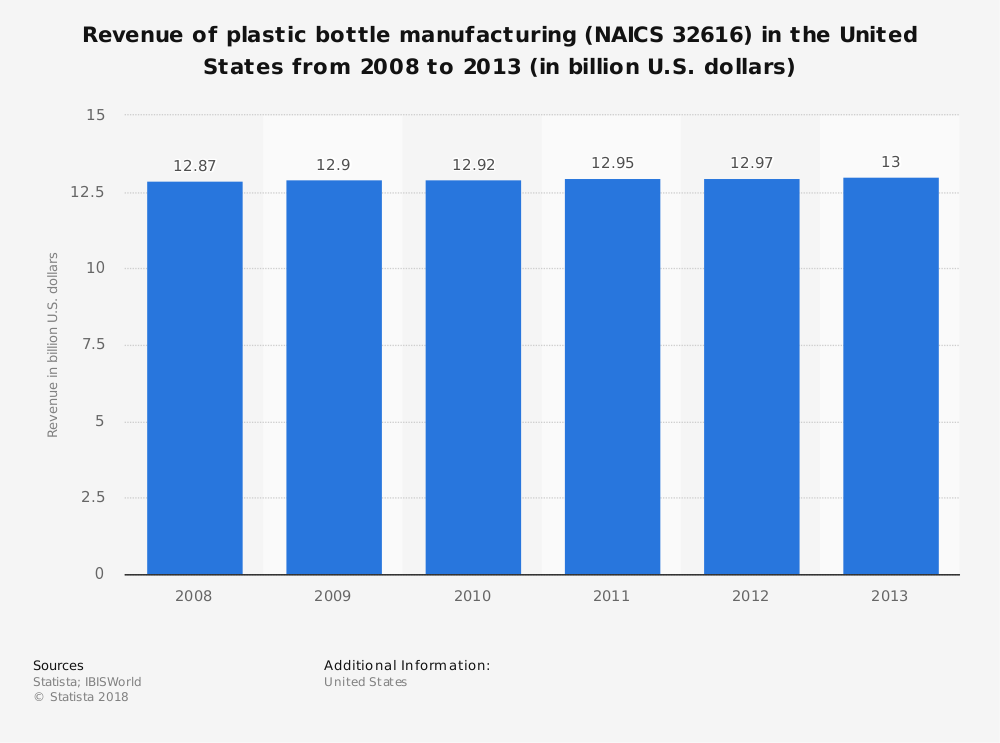 #12. 33% of fish that are caught in the United Kingdom are contaminated with microplastics. If someone regularly eats seafood, they might ingest up to 11,000 microplastic items in just 12 months. (Forbes)

#13. The European plastics industry contributes about EUR 30 billion to public finances and welfare programs every year. It has a 2.4 multiplier in GDP and a 3.0 multiplier for job creation. (Plastics Europe)

#14. More than 8.4 million tons of plastic waste was collected in Europe to be recycled at facilities inside and outside of the European Union. (Plastics Europe)

#15. 29% of the plastics that are created each year come from manufacturing facilities located in China. About half of all plastics are created in Asia. (Plastics Europe)

#16. As part of the overall plastics industry in the United States, almost 1 million jobs are directly or indirectly affected, in part, by the manufacturing of plastic bottles. Plastics are one of the fastest-growing and largest industries in the country. (Plastic Industry Trade Association)

#17. Employment in plastics manufacturing grew at a rate of just 0.3% from 1980-2014. At the same time, however, manufacturing jobs as a whole shrank by 1.3% during the same period. (Plastic Industry Trade Association)

#18. Although Texas offers more employment through plastics than any other state, the largest concentration of plastics jobs is found in Indiana. About 16.4 employees out of every 1,000 involved in non-farm work are employed by the plastics industry. (Plastic Industry Trade Association)

#19. Upstream jobs in plastic bottle manufacturing account for a majority of the opportunities provided by the industry. There are 0.83 upstream jobs for every job found in the overall industry. (Plastic Industry Trade Association)

#20. Over one-third of the final consumption of plastic products, from a value basis, makes its way to a service industry, including plastic bottles. (Plastic Industry Trade Association)

#21. Over 9% of the plastics manufactured in the United States are destined for the food and beverage industry. (Plastic Industry Trade Association)

#22. 74% of the plastic bottles that are purchased are intended for personal consumption by a household. (Plastic Industry Trade Association)

Microplastics are a growing danger that we’re just beginning to understand. We’re finding marine life consuming microplastics frequently, which affects the quality of sea life. There is a large island of plastics floating in each ocean, there because of our inability to recycle plastics.

In 2018, research from the State University of New York in Fredonia suggests that microplastics could be within our own bodies because, in part, of our use of plastic bottles. Although literature from the European Food Safety Authority suggests that most microplastics are removed from the body, the United Nations warns that the smallest microplastics found in food and beverages protected by plastic elements could enter the bloodstream or organs.

That information which stems from research that has been the focus of attention by the FDA since 2010.

If the issue of microplastics creates new safety protocols, then the plastic bottle manufacturing industry could be forced into rapid changes that would shift how we use this product. It could result in dramatic reductions of plastic consumption, which would immediately affect industry revenues.

Until more information regarding plastic use and consumption is released, this industry is in a wait-and-see mode, which will keep production levels and revenues at relatively consistent levels for the next 5-year forecast period, at minimum.