A listing of the most catchy beer slogans and memorable taglines from brewers around the world. These beer slogans have defined many craft brewers names with consumers through their successful advertising campaigns.

1664. A Good Year for Beer.
A better beer deserves a better can.
A Double Diamond works wonders
A hard earned thirst needs a big cold beer and the best cold beer is Vic
A whole lot can happen, Out of the Blue.
Adnams Ale. Southwold, by the pint.
America’s World Class Beer
Amstel. Our beer.
amuel Adams. America’s World Class Beer.
And now, for a Bavaria.
Australians wouldn’t give a XXXX for anything else
Bass. A little bit of better.
Bass. Reach for Greatness.
Be yourself and make it a Bud Light.
Beck’s. Life Beckons
Beer to Dine For.
Believe
Boddingtons. It’s a bit gorgeous.
Brewed with Pure Rocky Mountain Spring Water.
Budweiser. True
Busch Beer. Head for the mountains.
Carling. Spot On.
Carlsberg. Probably the best beer in the world.
Cascade Premium. Pure Beer.
Celebrate football
Cheers to the Vikings!
Corona. Miles Away From Ordinary
Everything you always wanted in a beer. And less.
For all you do, this Bud’s for you.
Foster’s. Australian for beer
Fresh. Smooth. Real. It’s all here.
Germany’s Fun-Loving Beer.
Give him a right good Hemeling tonight
Good call
Good things come to those who wait.
Good, better, Paulaner
Greene King IPA. A tasty change from the usual.
Guinness is Good for You
Guinness refreshes your spirit
Harp puts out the fire
He who thinks Australian, drinks Australian
Head for the mountains
Heineken refreshes the parts other beers cannot reach.
How do you feel? I feel like a Toohey’s.
How refreshing! How Heineken!
I am Canadian.
I’m only here for the beer.
If I wanted water, I would have asked for water.
If you’ve got the time, we’ve got the beer
If you’ve got the time, we’ve got the beer. Miller Beer.
It Doesn’t Get Any Better Than This!
It looks good, it tastes good, and by golly it does you good
It Starts Here.
It won’t slow you down
It’s a bit gorgeous
It’s all about the beer.
It’s BEER. Hooray beer!
It’s got to be Guinness
It’s Miller time!
It’s what your right arm’s for.
It’s what’s inside that truly counts. Dreher.
John Smith’s. No Nonsense.
Kokanee. Straight from the Kootenays.
Labatt. Good things brewing – corporate
Lager Beer at its Best.
Let your tastes travel.
Life Beckons. Choose wisely.
Looks ugly. Tastes great.
Lose the carbs. Not the taste.
Mackeson Beer. It looks good, it tastes good, and by golly it does you good.
Michelob AmberBock. Rich and Smooth.
Newcastle Brown Ale. The Other Side of Dark.
No matter what what’s-his-name says, I’m the prettiest and Lite’s the greatest
Norrlands Guld. Be yourself for a while.
Nothing’s as fresh as a Coldie
Now enjoy Guinness anywhere
Old Milwaukee. Taste as great as it’s name.
Our Hand Has Never Lost Its Skill.
Out of the darkness comes light.
Pilsner Urquell. The world’s first golden beer.
Pure Gold. From the heart of the Kootenays
Put her on a pedestal, or a coaster
Rolling Rock. Free Flowing.
Sagres. Spot the difference
Sapporo. Drink in the world
Schaefer. America’s Oldest Lager Beer.
Schlitz. The beer that made Milwaukee famous.
Senses Never Forget
Sit. Savour. 1664.
Smirnoff Ice. Intelligent Nightlife.
Some things get better given longer.
Sooner or later you’ll get it.
Spot the difference
St. Pauli Girl. The Original Party Girl.
Staropramen. Get A Taste Of Prague.
Stay a little longer.
Stella Artois. Reassuringly expensive
Take Courage.
Taste as great as it’s name
Taste life. Pure Filtered.
Tastes great, less filling
That frosty mug sensation.
The beer drinker’s light beer
The Beer so Good it’s Bad.
The beer that made Milwaukee jealous …
The big ginger bite!
The Champagne of Bottled Beers
The Coldest Tasting Beer In The World
The Genuine Article.
The King of Beers.
The most natural thing in the world
The One and Only.
The silver bullet.
The world’s first golden beer
This is our Beer
Tuborg. BEer YOURSELF
Turn it loose!
Unmistakable German Craftsmanship
When you say Budweiser, you’ve said it all.
When you see the three-ring-sign, ask the man for Ballantine.
Where there’s life, there’s Bud.
Would you say no to another?
Wouldn’t you rather be Hemeling?
You never forget your first girl.

The infographic below takes a peak at the history of beer and current industry statistics by numbers. Consumers prefer beer as the third most popular drink outside of water and tea. 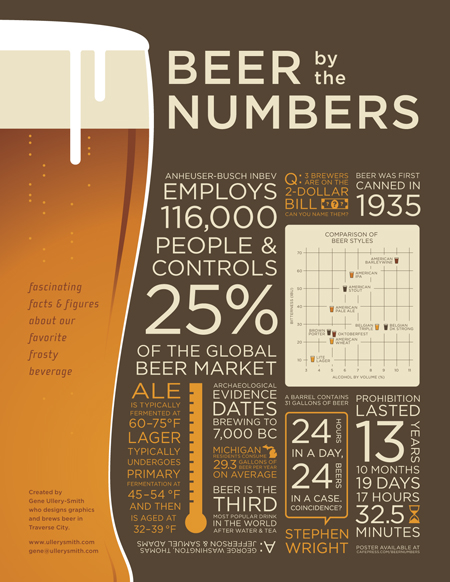