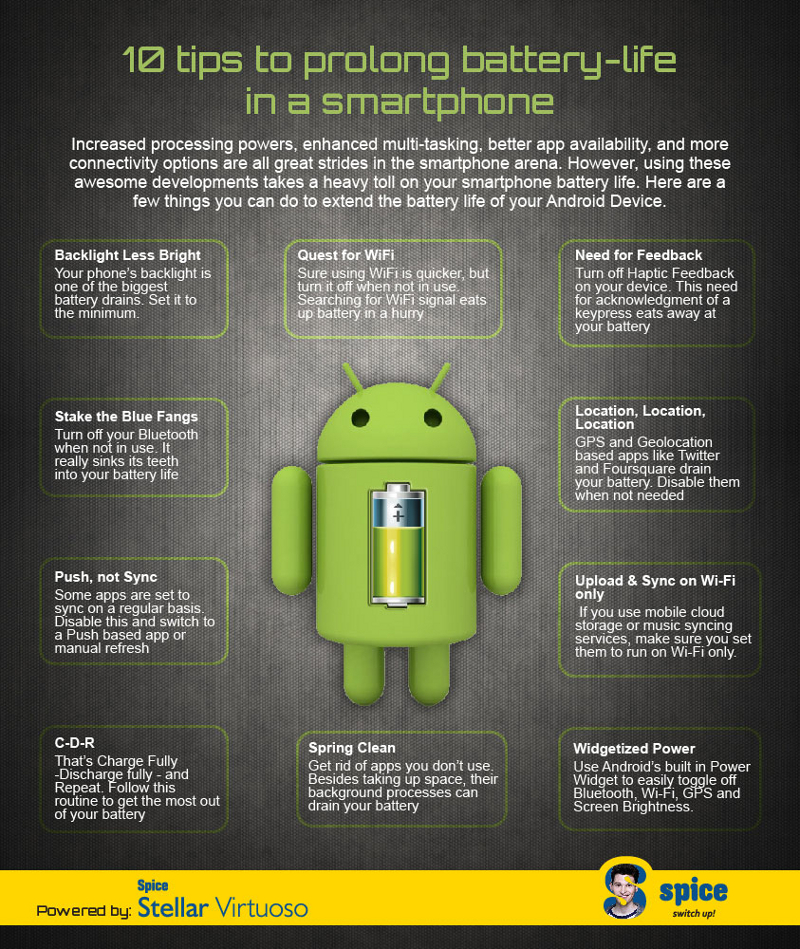 Does Your Smartphone’s Battery Die Quickly?

For some smartphones, it can seem like you’re charging the phone’s battery three times a day. Even if you’ve got a spare battery charger that can instantly charge your phone up, for some users it’s just not enough. Rather than it being a problem with the smartphone, however, it is often because of heavy usage that causes the battery to run out of juice so quickly.

If you’re having trouble having your smartphone make it through your day without needing a charge, consider making these changes in your habits to see if you can prolong battery life:

2. Turn off your WiFi when you don’t need it.
It only takes a couple seconds to turn off a smartphone’s WiFi feature, but it is often ignored and just left in the on position. As you travel, your phone will continually search for a new internet connection that you don’t really need, wasting precious battery life to do so.

3. Limit your use of Bluetooth.
Another major consumer of your smartphone’s battery is the Bluetooth connections you might be using. If you aren’t using a device, turn it off. Though that might mean needing to sync the device again later on some phones, is it worth a few extra seconds of syncing in return for not having a dead phone before the end of the day?

4. Don’t let your apps automatically sync.
When you have the option set for your installed apps to sync automatically, then they will periodically ask the server what new information needs to be included. These apps might even download data periodically throughout the day as well. All of this is done at the cost of your smartphone’s battery. By switching this to a manual task, you’ll be able to update your phone when you need to update it.

To minimize the time you take in shutting down your GPS, Bluetooth, and other battery draining components, there are apps you can install that will let you shut down multiple programs at the same time instead of having to enter each one. This will allow you to keep your battery strong throughout the day and let you enjoy not having to find a way to charge your smartphone over your next lunch hour.