Under Armour is a highly popular sports clothing and accessories company that currently supplies sportswear, footwear and casual apparel for customers around the world. Headquartered in Baltimore, Maryland, Under Armour currently has offices in China, Indonesia, and Canada as well. This multi-billion dollar company was founded by Kevin Plank, a 23 year old former special teams’ captain at the University of Maryland who started working out of his grandmother’s basement.

Over the next few years, Under Armour expanded tremendously thanks to Warner Brothers where they outfitted two football films, “Any Given Sunday” and “The Replacements”. Expanding to cover the XFL, the real marketing break came in 2003 with the “Protect This House” commercials which helped the company to explode in sales.

The testosterone-filled chant “Protect This House” fueled the Under Armour commercials and gained national attention by being bold and different. What started with a relatively unknown football player quickly expanded as Under Armour began signing well know athletes such as Ray Lewis, Stephan Curry, and Cam Newton.

The chant “Protect This House” became the anthem for Under Armour, helping them to reach a market awareness that few thought possible compared to the resources they had at hand. Their innovative strategy was to set themselves apart from the competition and battle for the attention of a new generation of customers.

From football, Under Armour has expanded to cover many other sports by sponsoring official uniforms and jerseys of teams around the world.

Another marketing strategy that has also been used by Nike and other outfitters of official team jerseys is introducing unique, colorful and striking uniforms for college and professional teams. The University of Maryland for example boasted new football jerseys from Under Armour that were emblazoned with the state flag.

The Alter-Ego t-shirt line featured superhero logos and other innovative designs that grabbed attention. This unique approach of making visual statements with their clothing line has allowed Under Armour to compete with much larger companies while helping to cover some of their shortcomings. For example, in terms of multi-colored socks which were all the rage, Under Armour was late in competing.

Under Armour has also embraced digital marketing to reach new customers and establish there brand with younger demographics. Mobile marketing, social media presence and other innovative strategies are used in part to save on costs, but also to reach potential customers that otherwise cannot be found by traditional means.

In the end, Under Armour began as a male-oriented sportswear line that is now harnessing its success to appeal to all types in their new marketing campaign. Expanding their reach and broadening the base of this already amazingly successful company. 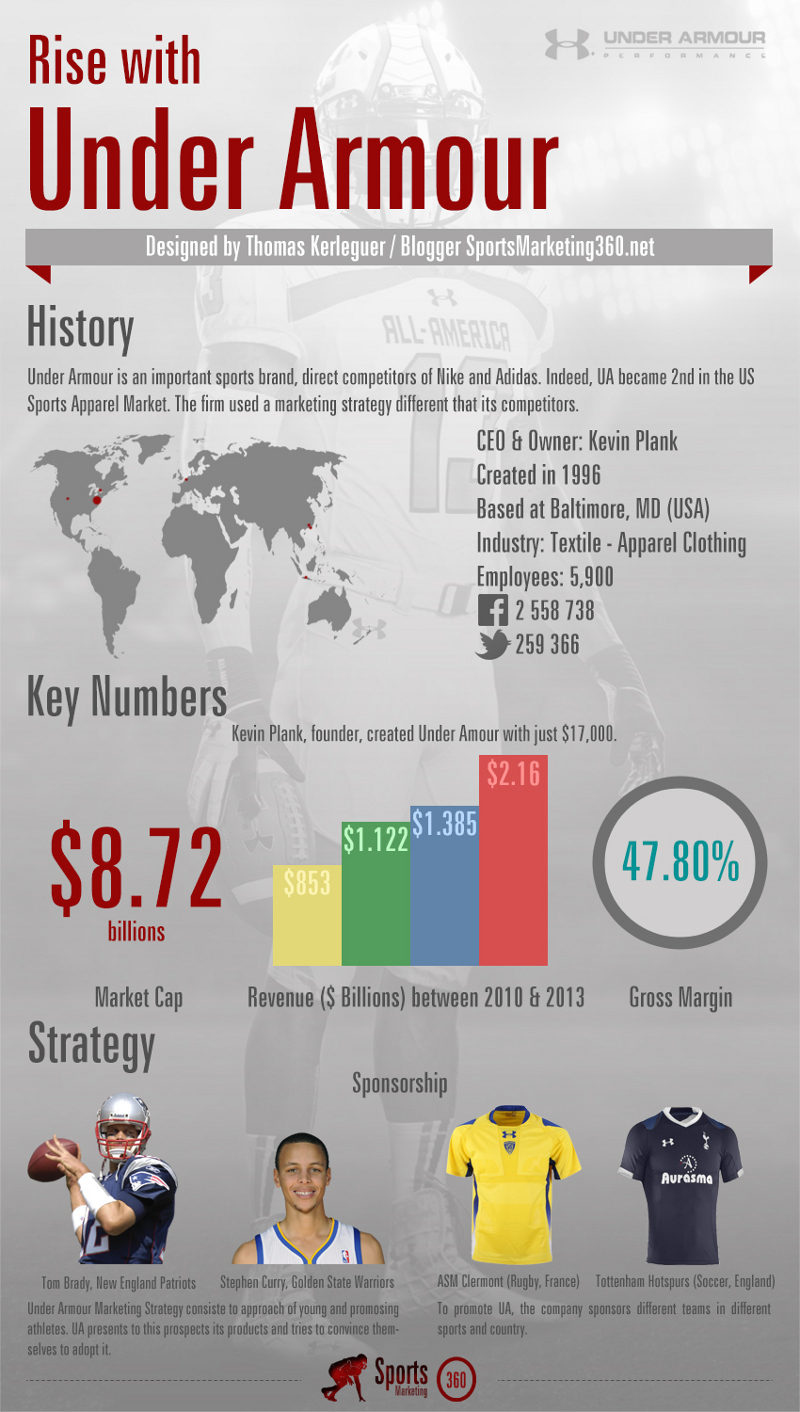