The Millionaire Next Door: The Surprising Secrets of America’s Wealthy is a famous book by Thomas Stanley and William Danko. In it, they interview many of America’s millionaires to determine what, if any, aspects of their decision-making or personalities played a part in their success. They bring their findings to the reader so you, too, can adopt their positive habits.

#1 Financial Independence is Key
First and foremost, maintaining your financial independence is more important than showing off your wealth. Stanley and Danko assert that millionaires frequently remind themselves that those who spend all their cash on high-priced luxury items often don’t have much wealth to their names.

#2 They Live Below Their Means
Related to the last takeaway, the authors found that the vast majority of millionaires didn’t spend a lot of money. In fact, they spent well below their means given their fortunes. In addition, the majority of the interview millionaires reported that they followed a household budget. In other words, they respected their wealth and kept their spending on a tight leash.

#3 They Use Their Time Wisely
Stanley and Dank discovered that the majority of millionaires spent their time smartly in order to efficiently earn and save money. As an example, most of the millionaires spent time planning their finances rather than shopping for luxury items or spending the wealth they had accumulated.

#4 Millionaires Serve the Wealthy
It seems that wealthy people often earn much of their money by providing services or products to those with money to spend. In other words, millionaires are more likely to provide services to other millionaires rather than to average people.

#6 Self-Sufficient Kids are a Plus
It’s no secret that children are one of the greatest drains on personal wealth that you can have. But teaching your children to become financially self-sufficient will allow you to accumulate wealth later in life without that wealth being drained from your offspring’s subpar financial activity.

#7 Millionaires Pick Smart Occupations
Most millionaires do not necessarily follow what their heart desires; instead, they go for businesses (often by founding their own) that has a good chance of returning their investments. Alternatively, they pursue occupations or careers that are guaranteed to provide a good paycheck, as well as push their children to pursue a similar career; law school and medical school were two common trends among most successful millionaires.

#8 Luxury Items are Not Necessarily Good Investments
Several of the millionaires interviewed by Stanley and Danko found through their life experiences that luxury items that force an individual to carry extensive debt are often not worth the cost or effort. Mental health commonly declines when one is forced into lots of debt, and luxury items that are not truly owned are often useless in an emergency. In addition, not having real wealth in case of an emergency or medical situation will often result in poorer health and a lower quality of life.

#9 Maximize Retirement Saving
Many smart and successful millionaires put effort toward saving for retirement, often by attempting to put aside 20% of their total earnings per year. While the amount of savings kept by millionaire varied from person to person, the overall trend was clear; smart financial investment means planning for the future.

#10 Avoid Paying Too Much Tax
The authors described many wealth-building strategies from successful millionaires. Many of the strategies involved paying attention during tax season and ensuring that they didn’t pay too much to the government during their working years. As an example, even if you have to pay a certain amount in tax, some tax laws allow you to use that taxed money to a 401k – which is money that works for you even if you can’t immediately spend it.

#11 Pay Off Loans Quickly
Many of the most successful millionaires and wealth builders paid off their loans, whether it was for, houses or cars, as quickly as possible. Higher monthly payments may initially seem risky or scary, but it’s usually more worthwhile and cheaper, in the long run, to pay off debt ASAP rather than kicking the can down the road.

#12 Buy A Reasonable House
Stanley and Danko discovered that most millionaires had insights on house buying. The key takeaway was that many people buy “too much house” or take out mortgages that they had no business paying for. Avoiding the temptation to overspend and purchasing a home you can afford and pay off in a reasonable amount of time will result in greater financial security.

#13 Use Credit Cards Wisely
While it’s important to avoid excessive debt, using credit cards for smaller purchases – and then immediately paying off the credit on the card – is a smart way to build your credit score and open up greater loan opportunities for buying larger items like a home or car. Such credit card use is another way to train your brain into avoiding deferring your debt.

#14 Investment is Necessary
To truly build wealth, most millionaires end up investing in worthwhile causes or businesses. This not only provides returns on investments if you learn to invest correctly, but it also gives back to the community and raises one’s quality of life, which is not earned from monetary value alone. Many happy millionaires were primarily satisfied due to the financial security later and the results of their latest investments.

#15 It’s Not All About the Stock Market
Perhaps surprisingly, Stanley and Danko interviewed several millionaires who pointed out that stock market investment is not the only way to build wealth from investments. Indeed, stock market investing is fickler and riskier than many will admit, and investing in real businesses or companies without focusing on stocks is a viable alternative to wealth generation.

Top 10 Quotes from The Millionaire Next Door

Go here to download The Millionaire Next Door PDF Summary.

The Millionaire Next Door Summary 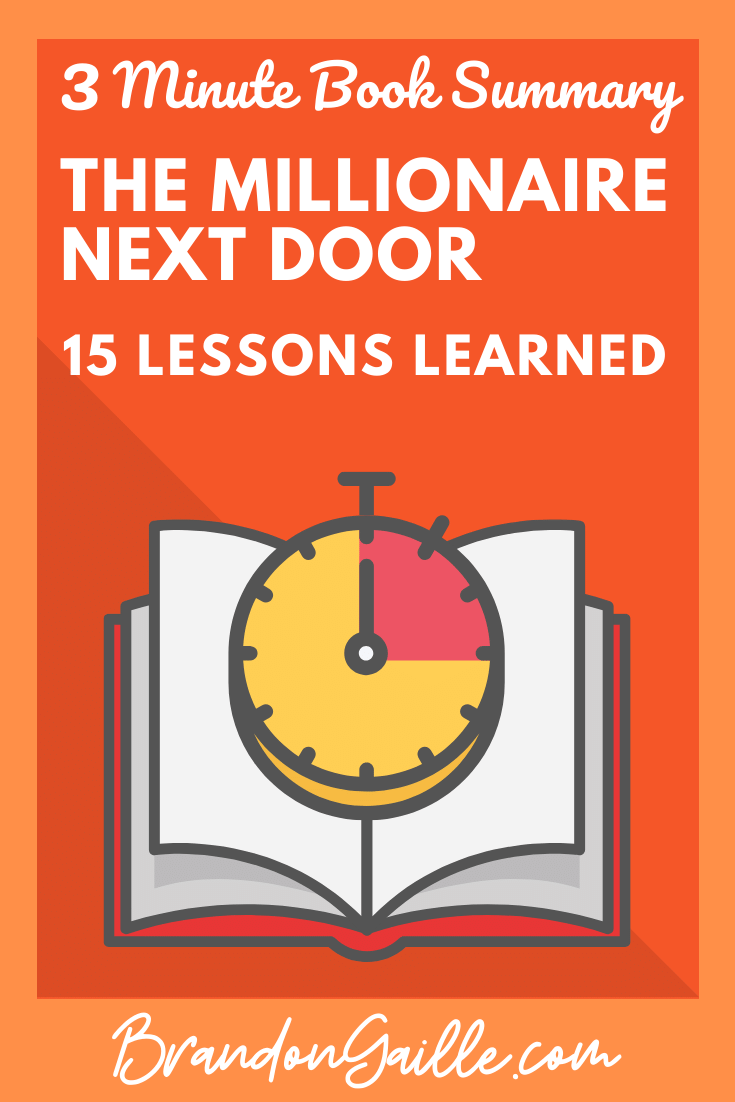