The Art of Seduction is a 2001 book by Robert Greene. It examines social power through several lenses, but particularly that of seduction, and of the different roles men and women play both in sexual arenas and beyond.

#1 Seduction is About More than Sex
One of the biggest keys to the book is understanding that seduction is about far more than just sexual charisma. In Greene’s view, seduction is often about completely swaying another person under your spell. Thus, seduction can be used not just in the bedroom but in politics, workplaces, and beyond.

#2 Surprise is Key
By far, Greene states that the most important shared trait that all seducers have is an element of surprise. This helps seducers keep their targets off balance and constantly infuses the conversation with them with an aura of novelty and sensual adventure. To be a seducer, you need to infuse a sense of surprise into your own behavior and conversation.

#3 Nine Categories of Seducers
Greene states that there are nine broad categories of seducers. The first three are the siren, the rake, and the ideal lover. The siren takes her name from classical mythological literature and is an exclusively feminine role. They portray the ideal fantasy for a man. A rake is an exclusively masculine archetype that speaks to the universal feminine needs for attention and desire. The ideal lover represents fantasies for both men and women and can sweep both sexes away.

#4 Dandy, Natural, and Coquette
The next three archetypes are also interesting. A dandy refuses to play by societal roles and expectations and curates a unique self-image that shows others what it really needs to be free. This is attractive to many people who feel they are trapped by their social roles. Naturals are honest and spontaneous and often a little childish, which is what makes them attractive. Coquettes often bait-and-switch, playing a tug-of-war with our expectations and making themselves more desirable as a result.

#5 Charmer, Charismatic, Star
The charmer makes people feel comfortable and uplifts their conversational partner’s best traits rather than themselves. This makes them endearing to many. The charismatic radiates confidence, purpose, and sexuality from the inside out. Many people are instantly smitten with them. Stars have glamorous and crazy lives that often reflect our inner fantasies, which make them attractive.

#6 Anti-seductive Behaviors
Similarly, Greene points out that there are several anti-seductive behaviors that are unattractive. Brutes or brutishness is one of them, which almost entirely eschews romance and creates people who are very blunt as a result. Suffocators produce too much affection and can cause their target to feel like they are drowning. Moralizers are incredibly serious and usually can’t take jokes, and often make their conversational partner feel guilty.

#7 Tightwads, Bumblers, Windbags
Tightwads are incredibly uptight, particularly about money. This is anti-seductive because they rarely give out gifts to others. Bumblers are very insecure and have a tendency to drag others around them to their level of fear or anxiety. Windbags are incredibly narcissistic and often don’t pay attention to the needs or ideas of others.

#8 Reactors, Vulgarians, Greedy Pigs
Reactors are incredibly whiny and usually kill any would-be seductive mood by complaining all the time. Vulgarians don’t think that seduction or other elements of attraction are particularly interesting and are usually too serious. They may also find sex disgusting. Greedy pigs are, naturally, greedy and take much more often than they give, if at all.

#9 You May Have Anti-seductive Behaviors
Greene acknowledges that many of us have these anti-seductive behaviors as a result of our personalities or our upbringings. But once you recognize them in yourself, you can work to correct them and become more seductive as a result.

#10 The Seductive Process
There are four main phases to seduction, whether in a romantic or political context. First, you must choose the right victim and separate them from their own world. This involves understanding what a person is vulnerable to in terms of seduction and tailoring your behavior accordingly. You’ll create a false sense of security and send mixed signals while appearing as an object of desire.

#11 The Second Phase – Lead Astray
The next phase of the seduction process occurs after you have intrigued your victims. In this phase, you fully hook your victims under your spell and bring them to a point of no return; whether it’s in a romantic context or asking them for a political or workplace favor. You can use your words and actions to pay attention to details and sow confusion.

#12 Phase Three – Precipice
The last phase makes everything deeper and targets your partner’s emotions. In this phase, you can normally explore behaviors and boundaries that would normally be off-limits with your target. Mix pleasure with pain and don’t be afraid to be a bit blunt or mean.

#13 Phase Four – Moving In
After you have fully seduced your victim, you now need to give them space to pursue you. This may involve using physical lures as well as letting go of your own inhibitions and anxieties. Alternatively, you may need to make a bold move depending on the seductive type of your target.

#14 Some Environments Are Better
Greene describes that some environments are much better for suction than others. Spaces with theatrical qualities or lots of glittering and opulent decorations are particularly effective as they trigger childlike and dreamy thoughts. Mystical environments for those laden with heavy emotional symbolism are also excellent.

#15 You Can Be Seduced, Too
While reading this book, it can be easy to think you aren’t vulnerable to the same seductive techniques described above. But all humans are vulnerable to seduction, and only by recognizing that you are actively being seduced can you shake yourself free from another person’s spell. Thus, understanding different seduction techniques and how you might be vulnerable is the best way to avoid seductive situations and use your own seductive powers to their greatest effect.

Top 10 Quotes from The Art of Seduction

Go here to download The Art of Seduction PDF Summary. 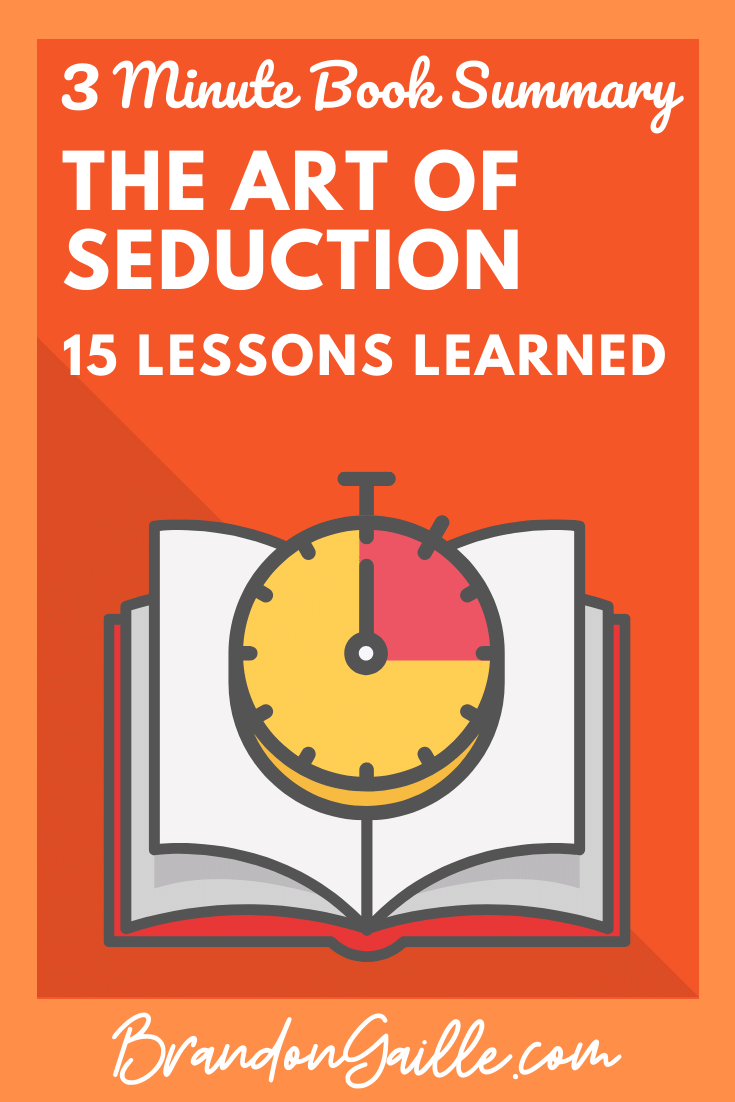