The fourth of July commemorates the adoption of the Declaration of Independence in the United States. The fourth of July bash started in 1912 in Denmark. In 1998, Congress passed a bill declaring 21 days between Independence Day and Flag Day to be named Honor America Days. The following collection of catchy 4th of July slogans have been displayed and used by others, but can be incorporated with your next festive event.

An independent country is a rightful country.
Being grateful for our nation, What a great sensation!
East or west freedom is the best.
Free at last, free at last.
Freedom is from within.
Freedom is never given, it is won.
Freedom is not given, it is taken.
Freedom is nothing but a chance to be better.
Freedom is the oxygen of the soul.
Freedom lies in being bold.
freedom of no one is safe until freedom of everyone is safe!
Freedom: Free for some, Costly for others.
Get together with hand on hand, as our nation is best land.
God Bless America.
Hear the music of the band, See the beauty of the land, From the Mountains to the Sand, this nation of ours is sure grand.
Hip Hip Hooray, It’s Independence Day!
If you are ashamed to stand by your colors, you better seek another flag.
Independence day is here,come on let’s see our flag rise high.
It is easy to take liberty for granted, when you have never had it taken from you.
Land of the free home of the brave.
Let freedom never perish in your hands.
Lets light up the sky this Independence Day.
Liberty is the breathe of life to nations.
May your Independence Day be filled with love and happiness I pray.
No matter the weather, lets celebrate Independence Day together.
Remember the reason why we celebrate Independence Day.
The best road to progress is freedom’s road.
The United States is the only country with a known birthday.
This nation will remain the land of the free only as long as it is the home of the brave.
Watch our flag fly high, As it waves up in the sky.
Without freedom, no one really has a name.

A total of 56 members signed the Declaration of Independence with Benjamin Franklin being the oldest of all at age 70. Edward Rutledge was the youngest at only the age of 26. The following infographic outlines interest facts about the United State’s birthday. 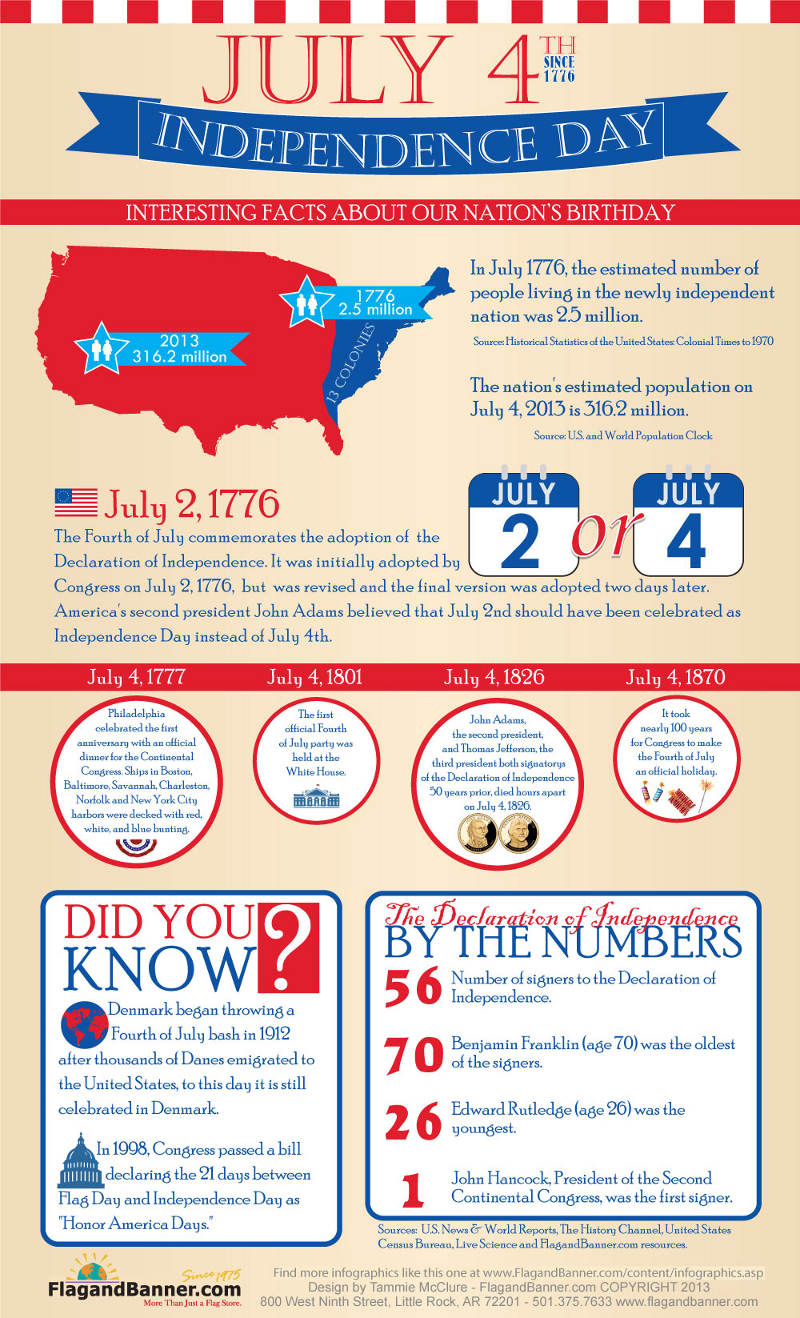