Freakonomics: A Rogue Economist Explores the Hidden Side of Everything is a 2005 nonfiction book by Stephan Levitt and Stephen J. Dubner. It explores several interesting economic reactions and apparently ironic arrangements.

#1 Put Away Morality and Ethics
While morality and ethics are important for the social fabric of our culture, both of these can blind us to economic truths and help us make bad business decisions. You’ll need to put away your morality and ethics to look at economic situations clearly and see the true causes and effects of different economic conditions and reactions.

#2 Three Incentives Dominate Your Life
The book describes three main incentives that dominate the majority of your actions and goals, and they have done so throughout your life. Incentives are the rewards or goals you are inspired to reach in order to do work and perform difficult tasks that your short-term motivation isn’t good enough for. These are used by anyone who tries to influence your behavior.

#3 Economic Incentives
The first kind of incentive is economic. These are incredibly common and are most often seen in the workplace. A basic version of these incentives is your paychecks, as they involve gaining money in exchange for your time and labor.

#4 Social Incentives
This next type of incentive is also incredibly common, although people don’t think about them nearly as clearly because of their often hidden nature. Social incentives are things like a motivation to look good in front of someone you like or to behave a particular way so you are not ostracized or isolated from your peer group.

#5 Moral Incentives
The final form of incentives is moral. These directly appeal to your drive to do the right thing and your conscience. They are often combined with many religious ideas and motivations. A great example of these are lessons about moral duties talk to us as children in the form of stories and many media sources.

#6 Combined Incentives are More Powerful
The book goes into detail to describe how combining these incentives together can make them more powerful than any single incentive by itself. This is why workplaces that fulfill you on a social level are often more attractive and receive greater work from you than a workplace that you just showed up at for money.

#7 Experts Use Incentives to Abuse
Experts, by definition, know more about a given topic or subject than the average person. But, being human, they often use this extra knowledge and expertise to abuse others through misinformation and through cheating. An excellent example of this is found with real estate agents. They may misrepresent the property they are showcasing because they have a strong economic incentive to get you to buy for the highest possible price. This makes the motivation to abuse you quite powerful and easy to bend to.

#8 Coincidence is Not Correlation
The book is about economics and strange coincidences, but various chapters make clear that two things happening at the same time are not necessarily always connected. Coincidence is not correlation, even though our human brains are constantly trying to find patterns in the random events of everyday life. Don’t always assume that events that are temporally connected are causally connected.

#9 There Are Often More Choices Than Just Two
We humans love to see things in binary relationships, but there are often more than two choices for any given action or path. For instance, you don’t necessarily need to end a relationship or remain in it indefinitely. A temporary stop or break might be good for both you and your significant other and represents an ideal third option for many couples.

#10 Making it Big Can Be a Bad Incentive
The book uses the idea that all drug dealers are rich to prove that they’re business models are actually a terrible idea. Most people become drug dealers based on the false dream that they’ll become rich, while in actuality, most drug dealers don’t make much money at all while only a few people managed to scrape to the top. In a nutshell, the “making it big” mentality keeps people moving but is a bad idea for most.

#11 Unseen Actions Can Have Strange Consequences
Arguably the most critical story in the book is that of Roe v. Wade and its consequences on the crime rate in the United States. When abortions rose in prevalence, kids in low-income environments were no longer born with the same regularity. As those children at a higher likelihood of becoming criminals, crime dropped. This demonstrates the idea that apparently unconnected actions can have lasting effects on other spheres.

#12 Parents Should Focus on What They Do
Many parents obsess over what they are as a career or a professional but what they do actually matters much more for the overall success of their children. In a nutshell, parents were highly educated and successful are more likely to have successful children regardless of their personalities or individual traits. The reverse is true as well.

#13 Success and Popularity Trickle Down
This concept is best demonstrated with the popularity of names. Throughout history, rich people have named their children certain names which become more popular over time. Lower-income people eventually adopt these names, which causes rich people to abandon them in favor of new fashionable monikers.

#14 Humans Are Moral
While the book points out that bringing your moral compass to the table is not always a good thing, it also claims that humans are, by and large, more moral than we give them credit for. This can be seen in the fact that there are far more people who don’t commit crimes than those who do.

#15 Conventional Wisdom is Often Wrong
The book makes it clear that conventional wisdom is often wrong when it comes to economics. The reasons for why something may occur – like the aforementioned crime rate drop – are not always clear to everyone affected by an event or trend. Raw data is much more useful, as is thinking outside the box. 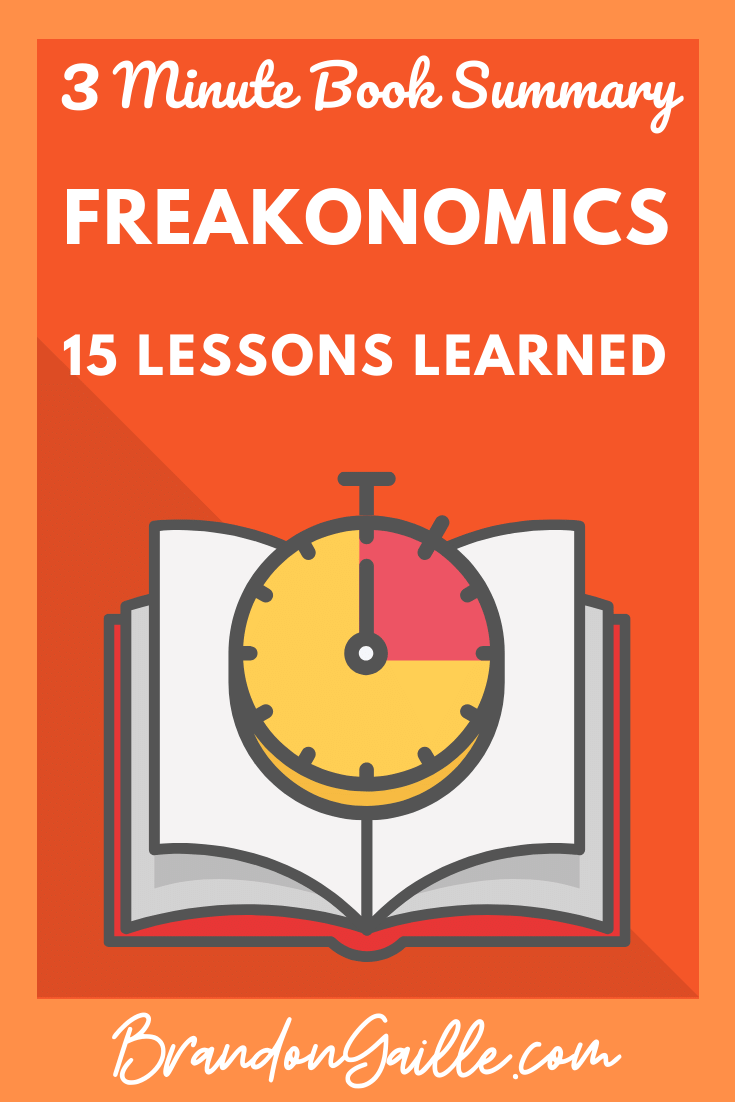