Here is a list of 73 famous quotes on restaurants that will inspire you and make you laugh.

“A restaurant is a fantasy-a kind of living fantasy in which diners are the most important members of the cast.” – Warner LeRoy

“There are advantages to being a star though – you can always get a table in a full restaurant.” – Ingrid Bergman

“When you first entered the restaurant, I thought you were handsome… and then, of course, you spoke.” – Helen Hunt in “As Good As It Gets”

“I was doing stand-up at a restaurant and there was a chalkboard on the street out front. It said, ‘Soup of the Day: Cream of Asparagus. Ellen DeGeneres.'” – Ellen DeGeneres

“I don’t know when pepper mills in a restaurant got to be right behind frankincense and myrrh in prominence. It used to be in a little jar that sat next to the salt on the table and everyone passed it around, sneezed, and it was no big deal.” – Erma Bombeck

“The disparity between a restaurant’s price and food quality rises in direct proportion to the size of the pepper mill.” – Bryan Miller

“If you want a reliable tip, drive into a town, go to the nearest appliance store and seek out the dishwasher repair man. He spends a lot of time in restaurant kitchens and usually has strong opinions about them.” – Bryan Miller

“The other night I ate at a real nice family restaurant. Every table had an argument going.” – George Carlin

“I was eating in a Chinese restaurant downtown. There was a dish called Mother and Child Reunion. It’s chicken and eggs. And I said, I gotta use that one.” – Paul Simon

“I went to a fancy french restaurant called Deja Vu. The headwaiter said, ‘Don’t I know you?’” – Rod Schmidt

“A Cannibal is a person who walks into a restaurant and orders a waiter.” – Morey Amsterdam

“Some people ask the secret of our long marriage. We take time to go to a restaurant two times a week. A little candlelight, dinner, soft music and dancing. She goes Tuesdays, I go Fridays.” – Henry Youngman

“Memories are like mulligatawny soup in a cheap restaurant. It is best not to stir them.” P. G. Wodehouse

“I was at this restaurant. The sign said ‘Breakfast Anytime.’ So I ordered French Toast in the Renaissance.” – Steven Wright

“When you go to a restaurant, the less you know about what happens in the kitchen, the more you enjoy your meal.” – Jeffrey Wright

“The finest landscape in the world is improved by a good inn in the foreground.”
Samuel Johnson

“I eat at this German-Chinese restaurant and the food is delicious. The only problem is that an hour later you’re hungry for power.”
Dick Cavett

“The best fame is a writer’s fame. It’s enough to get a table at a good restaurant, but not enough to get you interrupted when you eat.”
Fran Lebowitz, journalist

“Why does Sea World have a seafood restaurant?? I’m halfway through my fish burger and I realize, Oh my God….I could be eating a slow learner.” – Lynda Montgomery

“It’s easier to be faithful to a restaurant than it is to a woman.” – Federico Fellini

“In a restaurant choose a table near a waiter.” – Jewish Proverb

“The murals in restaurants are on par with the food in museums.” — Peter De Vries

“Eating at fast food outlets and other restaurants is simply a manifestation of the commodification of time coupled with the relatively low value many Americans have placed on the food they eat.”
Andrew F. Smith, ‘Encyclopedia of Junk food and Fast Food’ (2006)

“The age of your children is a key factor in how quickly you are served in a restaurant. We once had a waiter in Canada who said, ‘Could I get you your check?’ and we answered, ‘How about the menu first?'”
Erma Bombeck

“I went to a restaurant that serves ‘breakfast at any time’. So I ordered French Toast during the Renaissance.”
Steven Wright

“I went to this restaurant last night that was set up like a big buffet in the shape of an Ouija board. You’d think about what kind of food you want, and the table would move across the floor to it.”
Steven Wright

“Come unto me, all ye that labor in the stomach, and I will restore you”
M. Boulanger, 1765, Motto over door of first restaurant

“In the United States all business not transacted over the telephone is accomplished in conjunction with alcohol or food, often under conditions of advanced intoxication. This is a fact of the utmost importance for the visitor of limited funds . . . for it means that the most expensive restaurants are, with rare exceptions, the worst.”
John Kenneth Galbraith, economist

“Great restaurants are, of course, nothing but mouth-brothels. There is no point in going to them if one intends to keep one’s belt buckled.”
Frederic Raphael, (1931- ) British author

“I met a keen observer who gave me a tip: ‘If you run across a restaurant where you often see priests eating with priests, or sporting girls with sporting girls, you may be confident that it is good. Those are two classes of people who like to eat well and get their money’s worth.’”
A.J. Liebling (columnist)

“Never trust the food in a restaurant on top of the tallest building in town that spends a lot of time folding napkins.”
Andy Rooney

“I never eat in a restaurant that’s over a hundred feet off the ground and won’t stand still.”
Calvin Trillin, American writer (New Yorker magazine)

“Anybody who doesn’t think that the best hamburger place in teh world is in his home town is a sissy.”
Calvin Trillin

“Why does Sea World have a seafood restaurant?? I’m halfway through my fish burger and I realize, Oh my God….I could be eating a slow learner.”
Lyndon B. Johnson, 36th president of the United States (1908-1973)

“Avoid restaurants with names that are improbable descriptions, such as the Purple Goose, the Blue Kangaroo or the Quilted Orangutan.”
Calvin Trillin, American writer (New Yorker magazine)

“I’m in favor of liberalizing immigration because of the effect it would have on restaurants. I’d let just about everybody in except the English.”
Calvin Trillin, American writer (New Yorker magazine)

“Restaurants with peppermills the size of fire extinguishers and big red menus with the entries spelled with f’s instead of s’s are always expensive.”
Miss Piggy, ‘Miss Piggy’s Guide to Life’ (1981)

Here are some great facts and trends on the restaurant industry. 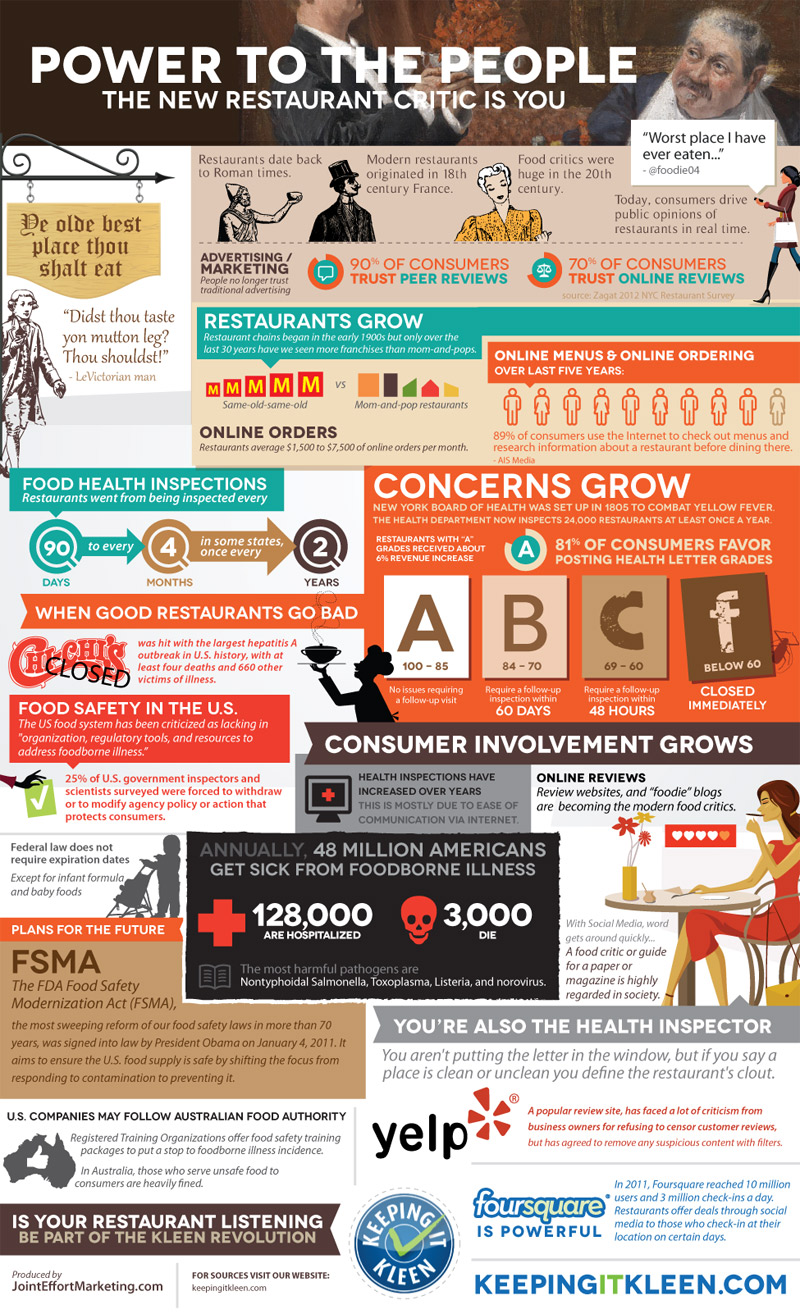