The meat packing industry is an essential part of the overall global meat industry. A majority of the activities for this industry are centered on U.S. firms, as the United States is the largest meat market in the world. It is an industry which is currently valued at more than $100 billion each year.

Hourly workers in meat packing plants earn an average of $12.32 per hour in the United States. Meat processors earn about $12.94 per hour. 97% of the facilities operating in the industry provide healthcare insurance coverage for their workers, with 52% of plants offering wellness programs. 29% of U.S. meat packing plants even offer English as a second language class or tuition support as part of their benefits package.

Meat packing is also one of the few industries which is still heavily represented with union work. Private sector unionization is currently at 8%, but in this industry, representation is at 60% for employees.

#1. The meat packing industry in the United States employs about 500,000 people each year. Another 118,000 people are employed in meat processing, with 223,000 employment opportunities available in poultry processing. (Meat Fuels America)

#2. The meat packing industry works with almost 33 million head of cattle each year. Another 772,000 calves are also processed by the industry in the United States. (Cornell University) 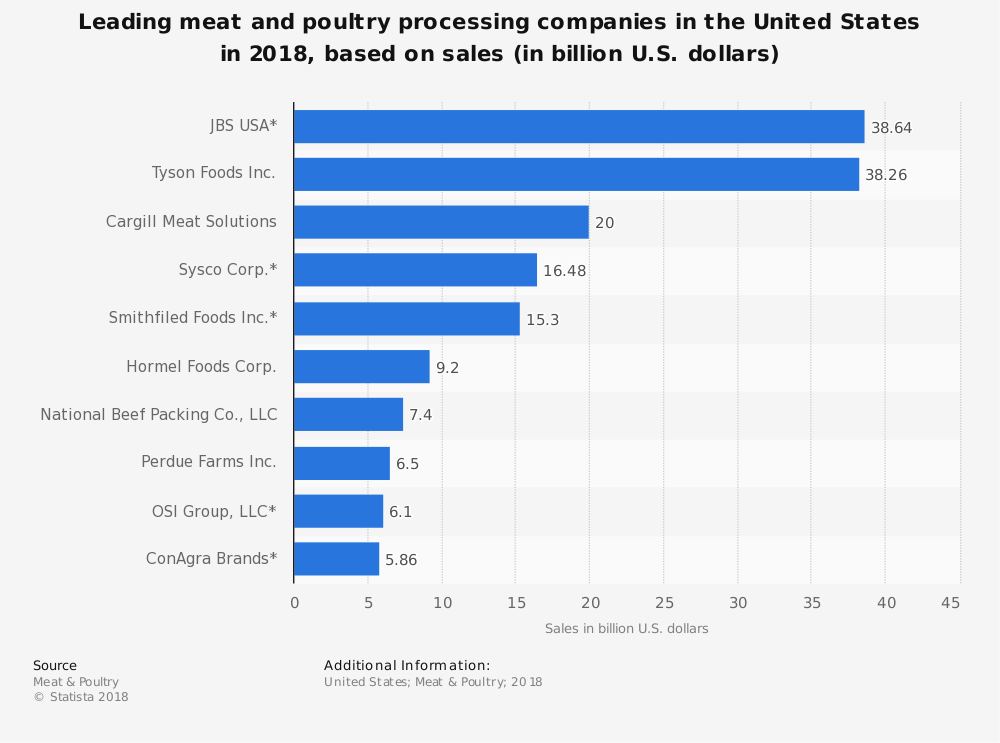 #3. More than 250 million turkeys are processed by the U.S. meat packing industry. That pales in comparison to the 8.6 billion chickens that workers handle each year to produce food products for people and animals. (Cornell University)

#4. Almost 2.2 million sheep and lambs are processed by the meat packing industry in the U.S. each year. (Cornell University)

#5. The U.S. meat packing industry handles 4 pigs for every cow that is processed, resulting in 113.1 million hogs being processed into food products each year. (Cornell University)

#6. 95% of Americans say that they use meat or poultry as a regular part of their eating habits. Only 1.6% of household income in the United States is spent on meat or poultry products, compare to the 11.25% of total income spent on food each year. (The Market Works)

#7. There are currently 800+ livestock slaughter plants which are federally inspected in the United States. (U.S. Department of Agriculture)

#10. There are 10 million metric tons of chicken products, along with 707,000 metric tons of turkey products, sent to the export market by U.S. producers each year as well. (U.S. Department of Agriculture) 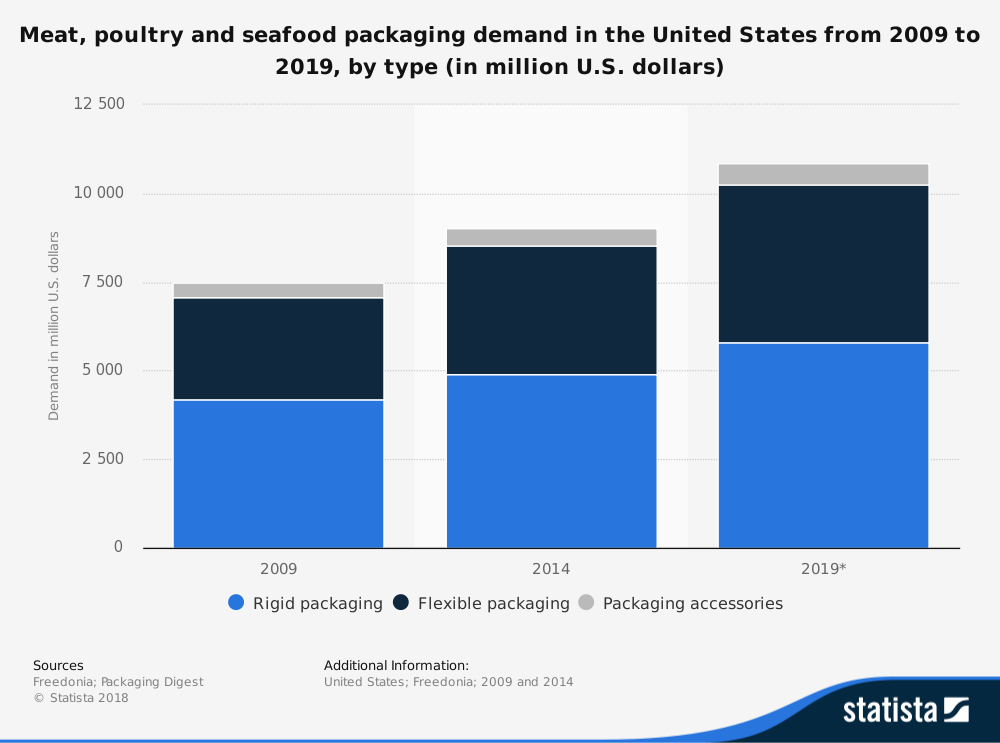 #11. Because of the efficiency of the meat packing industry, Americans spend less of their disposable income on meat than any other country in the world. In comparison, Canadians spend 9.6% of their income on meat and Mexicans spend 24.6% of theirs on meat products. In Pakistan, almost 50% of disposable income must be spent on meat and poultry. (U.S. Department of Agriculture)

#12. Since 2000, the meat packing industry has worked to decrease illnesses caused by E. coli by 45%. There has been a 24% decrease in listeria illnesses, and a 7% decrease in Campylobacter. (Centers for Disease Control and Prevention)

#13. The combined salaries of workers within the meat packing industry are $19 billion, providing direct economic supports at the local level throughout the country. (North American Meat Institute)

#14. Exports accounted for over 21% of pork production in the United States and 10% of total beef production. The top markets for volume are Japan, Canada, and Mexico for U.S. meat packers. (North American Meat Institute)

#16. Meat sales in the United States totaled $198 billion in 2013, which is the last year that verified data was released to the public. (North American Meat Institute)

#18. Pork and beef, along with other sources of red meat, are responsible for one-third of global revenues which are generated by meat packers and processors. The compound growth rate of red meat globally was 6.7% in 2016. (Statista)

#19. The market share of processed poultry products for the global meat packing industry was 38%. (Statista)

#20. About $75 billion in revenues was earned in China by the industry with the sale of sausage and other meat products. (Statista) 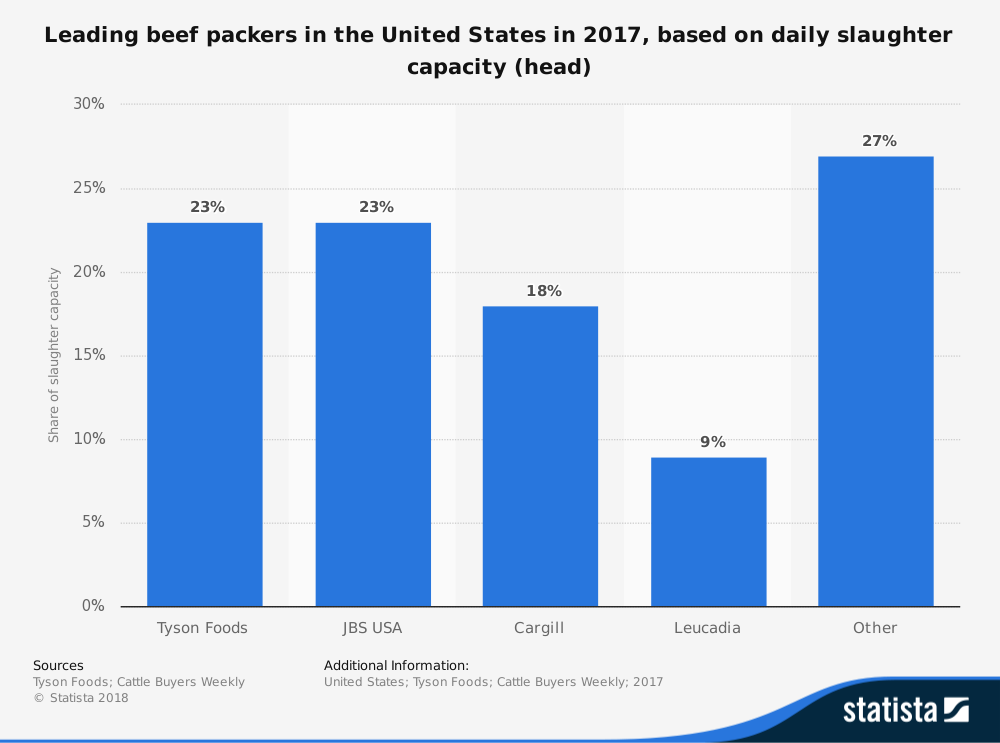 #21. Although a majority of the revenues earned by the meat industry comes from the United States, most of the world’s meat is actually produced in Asia. Over 140 million metric tons of meat were produced in the APAC region in 2016. (Statista)

#22. The trade value of the U.S. beef industry was $6.2 billion in 2017, producing the highest levels of meat revenues in the world today. (Statista)

#23. Over 330 million metric tons of animal proteins are produced throughout the world each year. Poultry is the most common type of meat that is consumed each year. (Statista)

#24. The average person in the world today eats about 77 pounds of meat products throughout the year. Americans eat 109 pounds of red meat and 93 pounds of chicken per person, almost tripling the global consumption rate. (U.S. Department of Agriculture)

#26. 86% of consumers in the United States say that they purchased a chicken snack or meal from their local supermarket or grocery store in the past two weeks. Another 68% of consumers said that they ordered a chicken dish from a local restaurant or other food service location. (National Chicken Council)

#27. 89% of consumers say that they want to have more information available about the chicken products they purchase and eat. 57% say that the information should be placed somewhere on the package of the meat product. Top data points include what label claims mean, cooking suggestions, and freshness. (National Chicken Council)

#28. If people were provided with more information about their meat purchases, 62% said that they would purchase more when they went to their local supermarket or grocery store. (National Chicken Council)

#29. 29% of consumers say that they plan to purchase more chicken products at the store in the next 12 months compared to the previous year. Another 19% said that they would order more poultry products from restaurants. (National Chicken Council)

#31. When suppliers, producers, and distributors are added to the employment numbers of meat packers and the rest of the meat industry, over 6.2 million jobs are created in the U.S. to support the eating needs of global households. (NBC News)

#32. About 6% of the GDP in the United States each year is supported by the efforts of the meat packing industry. A total impact of more than $864 billion is created each year from the overall meat industry. (NBC News)

#33. Total consumption of beef products in the United States reached 24.1 billion pounds in the last year. People who eat an average of ¼-pound of red meat each day raise their risk of colon cancer by 17%. (NBC News)

#34. 60% of the pork products which are handled by the meat packing industry in the United States involves processed foods. Bacon and sausage are the two most common processed meats which are packaged, with 25% of that production headed to the export market. (NBC News)

#35. The average retail price of ground beef in the United States is about $4.25 per pound. Beef steaks average $7.89 per pound, while sliced bacon is priced at more than $5.50 per pound. Bologna is one of the cheapest meats available in the U.S. market, the only product which is consistently under $3 per pound. (NBC News)

#37. 90% of products from the largest hog producers in the United States are controlled by long-term contracts. Less than half of the meat packing facilities purchase at least 10% of their hogs for pork products through this type of arrangement. (U.S. Department of Agriculture)

#39. Mexico and Japan import about the same amount of packaged meat products each year, averaging about 240,500 tons each. Variety meats are included in that overall figure. (U.S. Department of Agriculture)

#40. Including Mexico and Japan, there are six countries/regions which import over 100,000 tons of packaged meat from the United States. The Middle East, South Korea, Canada, and Chile are the primary customers of the U.S. industry. (U.S. Meat Export Federation)

#41. Volume levels of processed meat products have tripled since 2005, when 472,000 metric tons of beef exports were made available. At the same time, the value of meat products has risen by 4 times. (U.S. Meat Export Federation)

#43. Poultry meat packing is scheduled to overtake beef packing in the U.S. for the first time by the year 2020. In 1990, the gap between red meat and poultry products was over 60%. (Cornell University)

#44. Commercial meat production levels are down 2% in the last published year of reliable data. A total of 23.7 billion pounds of beef were handled commercially by meat packers to provide food products to the rest of the world. (Cornell University)

#45. The meat packing industry in the United States has seen a 60% increase in the amount of pork being handled since 1990. In 2015, estimates suggest 24.5 billion pounds of pork products were managed by the industry. (Cornell University)

#46. Record highs for cattle weight were achieved in 2015, while at the same time, the overall number of animals slaughtered reached figures that have not been seen since 1965. The average dressed weight of cattle handled by the meat packing industry was 829 pounds. Since 1990, this rate (U.S. Department of Agriculture)

#47. Ready-to-cook poultry production from the meat packing industry has increased by 900% since 1960 in the United States. With an estimated 40.6 billion pounds of chicken processed, the industry has seen an average increase of 4% each year for more than five decades. (U.S. Department of Agriculture)

#48. 78% of the commercial red meat production which occurs in the United States comes from just 10 states. Iowa, Nebraska, Illinois, Texas, and Kansas are the top-producing states for meat. (U.S. Department of Agriculture)

#50. Estimates suggest that lamb and mutton production was down by 3% in the United States in 2015. That would place processing figures at 150.6 million pounds, which would be about 2 million pounds from the all-time low set by the industry in 2011. (Cornell Univeristy)

The current nutritional recommendation for meat consumption is about 6 ounces per person, per day. There are currently 29 different cuts of beef and six different cuts of pork which are managed by the meat packing industry. The typical 3-ounce serving of a lean meat product provides about 200 calories and several key nutrients.

Americans eat more than this recommended level, with 55% of their diet comprised of red meat products. Women actually eat less on average than the daily recommendation.

With income levels rising for the first meaningful time in the past 30 years in the United States, additional meat consumption is expected. Rising income levels around the world, especially in China and India, are promoting higher levels of red meat consumption as well. Each point is an area of strength for the industry.

Look for new employment opportunities around the world to take advantage of domestic farmers and products to reduce costs. The U.S. will continue to lead in total revenues and value, but in the next 5 to 10 years, the rest of the world should start to catch up.