#1. The candy industry generates around $35 billion in revenues at the retail level each year in the United States. (National Confectioners Association)

#2. Hershey’s currently holds a 43.8% market share on chocolate products sold at the retail level in the United States. Hersey also hold a leading share of the overall candy market in the U.S, responsible for 30% of total sales. (Statista) 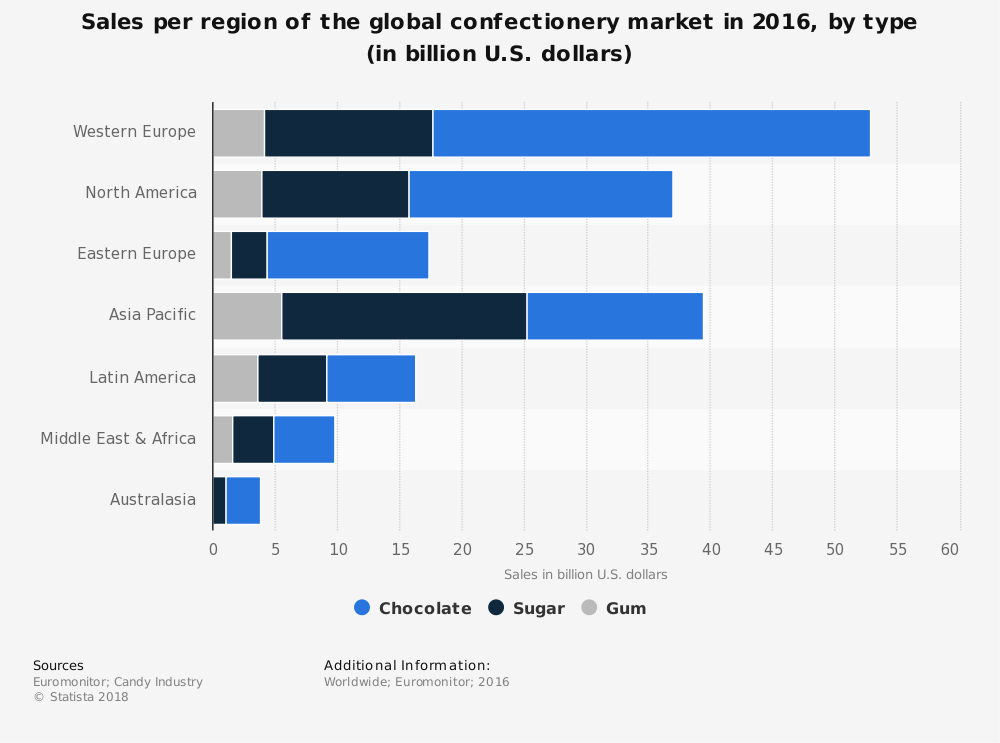 #3. Mars is the leading global confectionery company. They currently hold a 28.9% share of the U.S. confectionery market. (Statista)

#5. The sale of retail chocolate in the United States from countlines totaled $6.39 billion in 2016. (Statista)

#7. Wrigley’s Extra is the leading brand of sugarless gum in the United States. Their Double Mint brand generate $108.9 million in sales in 2016. (Statista)

#10. About 20% of Americans say that they purchase candy that is seasonal. (Statista) 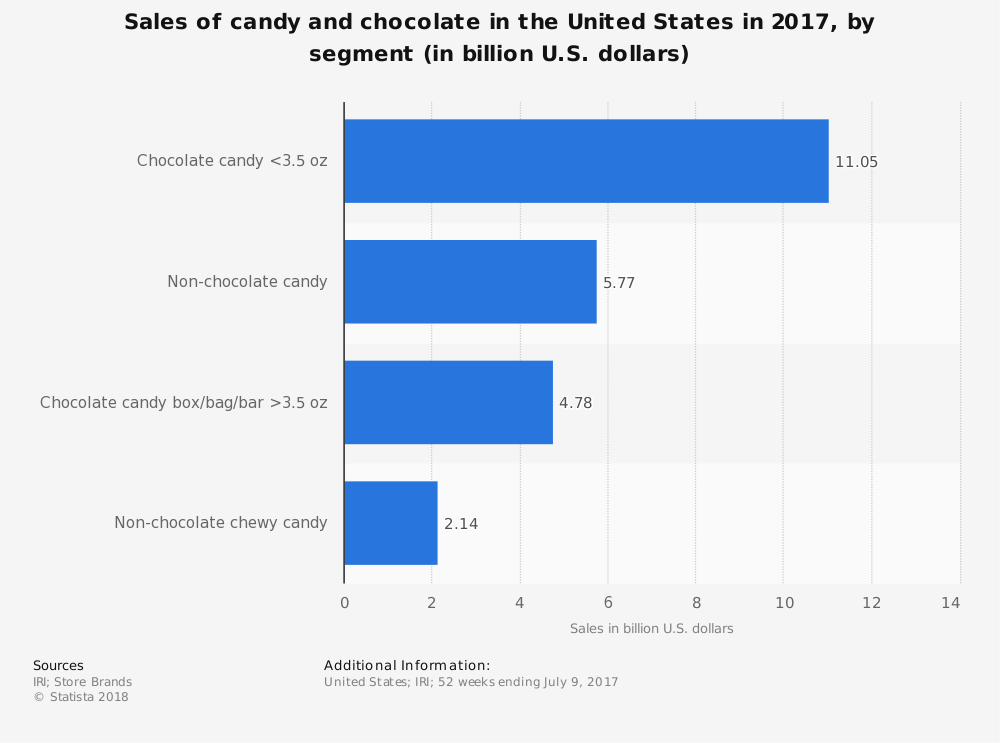 #12. The global retail sales of candy products reached $186 billion in 2017, which reflects a 2.7% increase from the year before. (Euromonitor)

#13. Chocolate continues to be a global leader in overall sales, seeing a 3.3% rise in values. Sugar-based confectionery sales rose by 2.4%, while gum sales rose by 0.9%. (Euromonitor)

#14. Three products (Sour Patch Kids, Starburst, and Haribo Gold Bears) helped non-chocolate dollar sales to grow by 4.5% in the first half of 2018, while chocolate sales grew at just 2.5% over the same period. (Euromonitor)

#16. An estimated 13,600 businesses are currently active within the global candy and chocolate manufacturing industry today. These firms are responsible for the direct employment of over 450,000 people. (IBIS World)

#18. In the United States, the candy production segment of the industry has experienced a slight decline since 2012. From 2012-2017, the industry saw a decrease of 0.3% on average each year. (IBIS World)

#19. About 500 businesses are currently involved with candy production in the United States, providing direct employment opportunities for about 17,000 people. (IBIS World)

#20. Total revenues generated by the candy production segment of the U.S.-based industry are valued at $8 billion. (IBIS World) 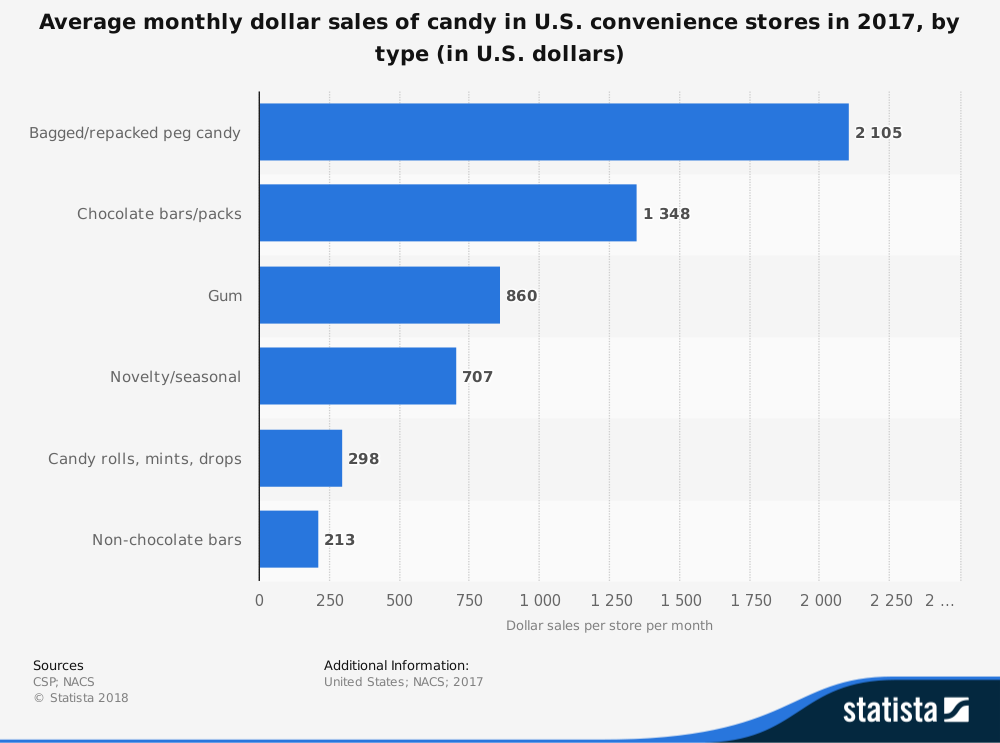 #22. People are beginning to pay attention to the ingredients that are found in their candy as well. 45% of global consumers said they would prefer a product which contained natural ingredients. This was followed by a preference for no artificial colors (44%), no GMOs (43%), and no artificial flavors (42%). (Nielsen)

#24. The no-sugar segment of the candy industry saw the strongest levels of growth between 2011-2014, tripling in total value. It is a segment that is now worth $3 million. (Nielsen)

#29. Organic cocoa is a small, growing segment within the candy industry. In 2017, it was less than 0.5% of the overall cocoa market. About 15,500 tons were produced for the global candy industry, with Madagascar being a leading exporter. (International Cocoa Organization)

#30. Global organic chocolate sales increased in value from $171 million in 2002 to $304 million in 2005, driven upward because of ongoing concerns regarding food safety. (International Cocoa Organization)

#31. Certified organic cocoa products are able to sell at a higher volume, reaching rates of $300 per ton. Originating countries with small volumes of organic cocoa can fetch a premium of 3 times the going rate, with some pricing near $1,000 per ton in 2017. (International Cocoa Organization)

#33. Since December 2007, the CPI for fresh cupcakes produced by members of the candy industry has risen by 21%. (Bureau of Labor Statistics)

#34. Brown County, Indiana has the highest location quotient for candy manufacturing in the United States, at 15.8 positions per 1,000. (Bureau of Labor Statistics)

#35. Total cocoa production worldwide reached 4.55 million tons in 2016, with about 70% of that production located in Africa. (Statista)

#36. Almost 2 million tons of cocoa that is available to the global candy industry originates from the Ivory Coast. Almost 540,000 tons of cocoa beans are processed in the country every year. (Statista)

#38. About 80% of adults in the United States say that they eat chocolate candies on a regular basis. (Packaged Facts)

#39. Premium chocolates control an 18% market share of total dollar sales for the chocolate segment of the candy industry in the United States. (Packaged Facts)

#40. The top 4 marketers of seasonal chocolate candies manufactured for Halloween are responsible for nearly 98% of the dollar sales experienced by the segment. Just two companies generated 70% of all chocolate candy sales at the retail level. (Packaged Facts)

#41. 48% of U.S. consumers say that they’ve purchased a dark chocolate candy product within the last year. 30% of these consumers purchased their chocolate online. (Packaged Facts)

#42. The sales of sugar-free chocolate candies from Russell Stover totaled $83.2 million in 2016. (Statista)

The United States continues to be a global leader in the consumption of candy products. It is an almost recession-proof industry, as many households in the U.S. view candy as an affordable treat, even when money is short for them.

As income levels rise around the world, especially in countries like India with a large middle class, the candy industry has some explosive growth opportunities to consider. The industry will benefit from the demand from emerging markets, in addition to demand in mature markets for innovative new products that can satisfy a sweet tooth.

Industry forecasts place CAGR growth between 3.1% to 5.4%, depending upon the company providing the evaluation of trends and analysis. Although this growth is certainly possible, the previous 5-year trend did not reach its forecast goals. Nothing suggests that anything will dramatically change through 2023 or 2028 for the industry, which means a more accurate CAGR forecast would be in the 1% to 2% range.