The oil palm has been an essential component of society since perhaps the beginning of modern human civilization. In the late 19th century, archaeologists discovered a tomb in Abydos, Egypt which contained vessels of this product that dated to the 30th century BC. There are written records of palm oil used as a local food source when Europeans traveled to West Africa in the 15th century.

Although palm oil was originally a global resource for civilizations, the 20th century saw Malaysia emerge as the largest producer. By 1990, the country was producing over 11 million metric tons of the product per year. There are still plantations operating in Africa as well, started by Europeans who colonized the area in the early 19th century for that exact purpose.

When the production figures from Malaysia combine with those from Indonesia, almost 90% of the world’s palm oil supply comes from these two countries. It creates economic opportunities for those involved, but it also creates environmental issues. Up to 110,000 people each year face life-threatening consequences due to the pollution and deforestation caused by the desire for new revenues generated by this product.

#1. The Indonesian palm oil industry produces 54% of the available products for the global market today, with their primary production centers located in Sumatra, Borneo, and Kalimantan. About 70% of the operational palm oil plantations in the country are based in Sumatra. (University of Teuku Umar)

#2. Mature lands make up about 95% of the palm oil production areas that are available in Nigeria, allowing this section of the global industry to produce approximately 1.4 million metric tons for consumption each year. (Statista) 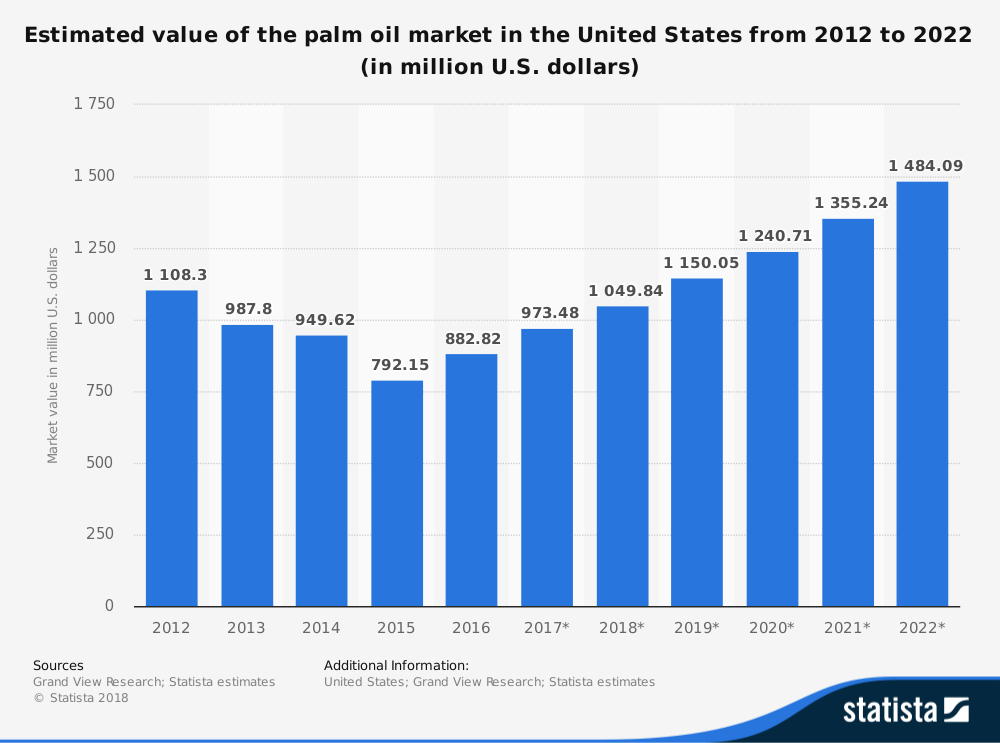 #3. There were 13 consecutive years of industry growth experienced by the Indonesia palm oil industry before experiencing a decline from 33.4 million tons to 32.6 million tons in 2016. Even with that decline, the amount of palm oil produced in the country is more than three times higher than what it was in 2002, when 9.37 million tons were created. (University of Teuku Umar)

#5. The average size of a palm oil plantation in Thailand is just 8 acres, with 80% of operations happening on land that is even smaller in size. (Krungsri Research)

#6. There is an estimated supply gap existing in the global palm oil industry of nearly 500,000 tons, making it possible for a disruptor like Nigeria or Thailand to create new economic opportunities for themselves. (FBN Quest)

#8. The Indonesian palm oil producers contribute about 2.5% of their country’s gross domestic product each year. Smallholder plantations account for 40% of the total production achieved locally, with state-owned enterprises contributing another 10%. (Indonesian Investments)

#9. The total refining capacity for palm oil in Indonesia stands at 45 million tons, which is a figure that has doubled since 2012. (Indonesian Investments)

#10. 60% of the refined products which come from the industry are turned into olein, with 305 becoming stearin, and the remainder refined and deodorized to become food products, such as a non-dairy coffee creamer. (Krungsri Research) 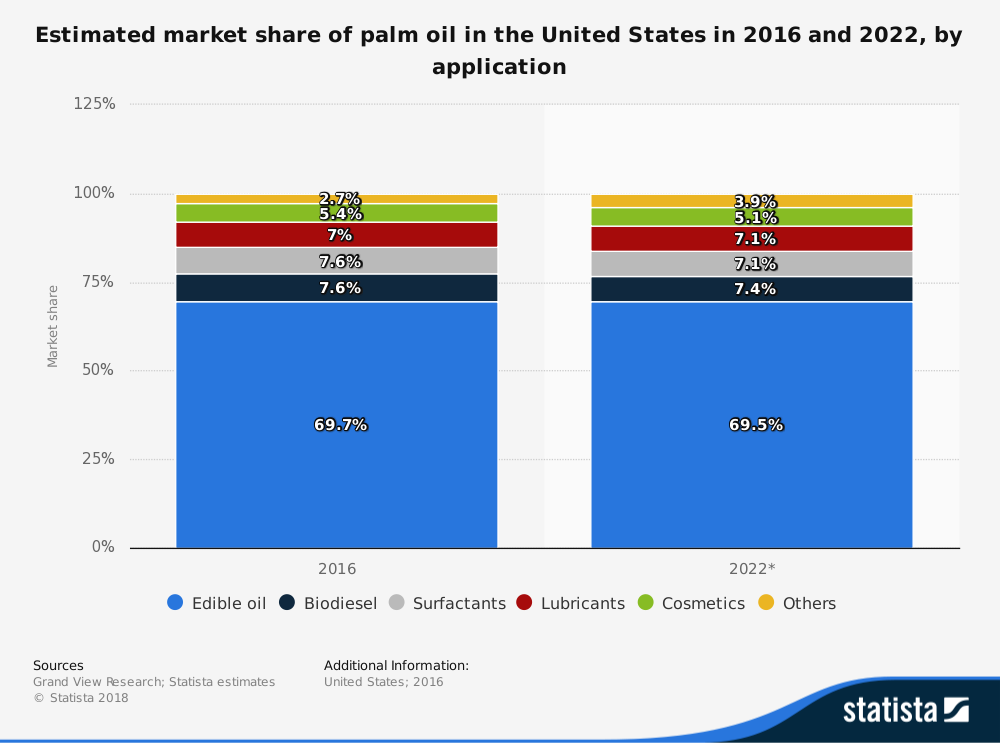 #11. 87% of the palm oil products harvested in Thailand comes from fruit bunches which are picked fresh, reducing the threat of rot that comes from free fruits that can sometimes be seen in other industry segments. (Krungsri Research)

#12. Export taxes on palm oil products from Indonesia can be as high as 22.5% when commodity prices are strong. The problem with this structure is that tariffs are 0% if the rate per metric tons falls below $750., which is where it has been for most months since the beginning of 2016. (Indonesia Palm Oil Association)

#14. Palm oil is a top priority because it can produce up to 10 times more oil per unit when compared to sunflowers or soybeans. (Earth and World)

#15. One tablespoon of palm oil currently contains about 55% of the daily recommendation of saturated fat for the average person. (One Green Planet)

#16. Because of the habitat losses experienced by the palm oil industry efforts in the Asia-Pacific region, up to 50% of local orangutan populations have been lost in the desire to create new plantations. There are an estimated 6,300 Sumatran orangutans left in the wild right now. (One Green Planet)

#17. Clearing about two square acres of peat forest to create new space for palm oil production releases about 6,000 tons of carbon dioxide into the air. (One Green Planet)

#18. Over 5,000 human rights and land conflicts occur in Indonesia because of the palm oil industry, with 45 million people living in the country’s forests. (One Green Planet)

#20. Only 2% of the palm oil taken from Thai mills actually makes it to the export market for sale. 32% of the domestic demand is for direct consumption, with the remainder used for biodiesel purchases. (Thailand Department of Internal Trade) 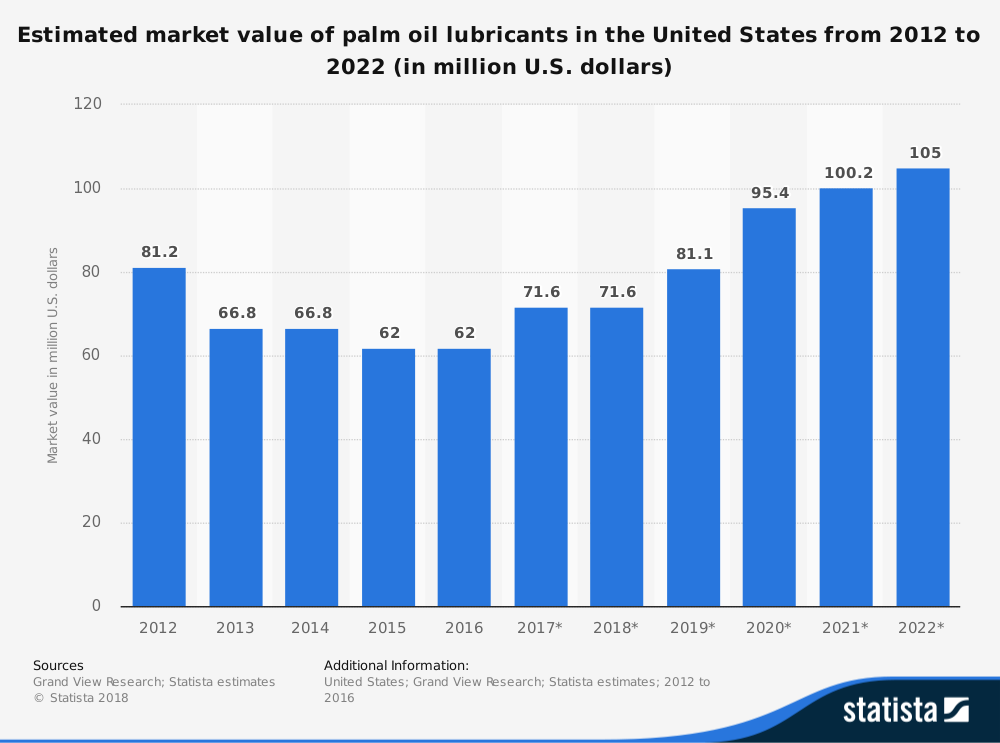 #21. India imports the most palm oil in the world today, purchasing over 10 million metric tons in 2016. That represents about one-third of all sales. Europe imported 21% of the available commodity during that same year, with China finishing in third with 16% of the market. (Palm Oil Analytics)

#22. Over 2.6 billion liters of biodiesel fuel come from the palm oil industry in Indonesia, which leads the world in the creation of this product. Almost all of the fuel created by the industry is sold domestically. (Palm Oil Analytics)

#23. What palm oil providers like Nigeria struggle with when compared to Malaysia or Indonesia is production efficiency. Up to 50% of the possible oil that could come from the annual crop is lost each year because of inefficiencies. (NDPI Foundation)

#24. The palm oil industry is just 1 of 4 global enterprises which are ranked high for forced labor, child labor, and slavery by the United States. (One Green Planet)

#25. For a tree to grow properly on a plantation, a space of 10 feet around the diameter of each tree must remain clear. (NDPI Foundation)

#26. About 300 yards of rainforest are cleared every 60 minutes around the world to help push palm oil production levels higher. (World Wildlife Fund)

#27. 44% of the palm oil exports which occur each year originate from Malaysia, which is also responsible for 39% of the total production available each year. (Malaysian Palm Oil Council)

#28. What makes the palm tree a unique product is that it offers two oils for production instead of one: palm oil and palm kernel oil. For every 10 tons of palm oil that are produced, about 1 ton of palm kernel oil is obtained as well. (Malaysian Palm Oil Council)

#29. Malaysia uses about 90% of its agricultural land for either rubber production or oil palm plantations. Around 4.1 million hectares are planted with oil palm, representing less than 2% of the total land area devoted for planting this product around the world. (Malaysian Palm Oil Council)

#30. About 16 million employment opportunities come from the oil palm industries of Indonesia, with most of them involving small-scale agricultural opportunities for farmers. (UNDP Indonesia)

#31. Since 2011, the world’s consumption of palm oil products has increased at an average rate of 5.3% each year. Increasing population levels, combined with rising incomes in markets like India, are responsible for a bulk of this increase. (Indonesia Palm Oil Association)

#32. Over 72 million seeds were put for sale by the global palm oil industry in 2017, which creates the potential for a downward trend in production within the next decade. When the new trees reach maturity, the rate of annual growth could drop from 10% to just 3%. (Indonesia Palm Oil Association)

#34. Because peatlands are usually drained to grow the oil palm, it creates a higher risk of fire for small-scale producers, especially those in countries like Thailand. 70% of the oil palm made available for purchase in any given year comes from these producers. (Mongabay)

#35. There are currently more than 700,000 hectares of land dedicated to palm oil plantations in Thailand. (Mongabay)

#36. The United States currently imports about 4% of the available palm oil on the export market each year, placing the country as the 7th largest purchaser. Myanmar (3%), Russia (2%), and Vietnam (2%) round out the Top 10, with Egypt (5%) and Bangladesh (5%) outpacing the U.S. for the product. (Palm Oil Analytics)

#37. 83% of the crude oil production from Indonesia, along with 73% of the output from Malaysia, is RSPO Certified. (Palm Oil Analytics)

#38. Palm oil creates 3.8 tons per hectare, which is one it is one of the most efficient crops in the world in terms of yield. (European Palm Oil Alliance)

Until more competition is available in the global palm oil market, Indonesia and Malaysia will continue to dictate pricing, growth, and quality trends for everyone. India and China continue to influence pricing for the commodity as well with their influence on the market. Although Europe purchases more than China does, they fall outside of the regional pricing mechanisms, offering less control on overpricing.

Friendly government policies toward expansion encourage more providers to enter this industry each year. For smaller nations like Nigeria, this creates small business opportunities that could provide essential income for households. On a global scale, however, this trend also promotes land clearing, rainforest destruction, and ongoing pollution issues.

There is potential for palm oil to be turned into a biodiesel which could change transportation networks around the world. It offers an affordable food product too, even though it is somewhat high in saturated fat content.

New agricultural development programs, innovative farming programs, and greenhouse gas collection could limit many of these negatives. Expect production levels to keep rising as capacity capabilities increase. If demand levels drop for palm oil, then it could cause the commodity price to fall rapidly, which could devastate the industry. If not, then this will continue to be one of the world’s strongest agricultural crops.