The average social game is between the ages of 37-40 and made up of 54% female and 46% male. With a worldwide market worth $8.64 billion in social gaming, 60% of that revenue accounts for virtual goods that are purchased. Advertising in social gaming has a 20% engagement rate compared to just Facebook brands that receive a typical 0.5%. The following assortment of gaming slogans have been used in the past for gaming advertisements and meant to encourage the creation of new brand taglines.

A new Perspective of Life.
A world light years beyond your imagination.
Adding Fun to your Life.
Adorn your Life with Game.
Adrenaline inside.
All Game, All Season.
Are you up to the challenge.
Baseball so real, its unreal.
Become a Jedi master without ever leaving home.
Bringing game to Everyone Life.
Byte back.
Byte down hard.
Change the system.
Cool under pressure.
Everything else is child’s play.
Feel everything.
Fun Filled Futures.
Genesis Does What Nintendon’t.
Get Nintendo or get out.
Grab the clutch and feel the power.
Heart of Perfect Gaming.
Inspire a generation.
Interactive game action.
Irresistible force.
It’s not just a game, it’s an infection.
Lets you Play Better.
Life is short, play more.
Live your passion.
Love your Game More.
Making masters.
Moments of Games.
Nintendo gamers, start your pulses.
No other video game stacks up.
Our gear is packed and ready to go.
Play beyond.
Playing Ideas for Life.
Playing is a new Skill.
Reality Bytes.
Shift happens.
So real it hurts.
Take a byte out of crime.
The fastest, most powerful, game console on earth.
The fighting game for real fighters.
The final test of the game master.
The game that takes you there.
The more you play with it, the harder it gets.
There’s no comparing it with any other video game.
Think fast.
This one is totally infectious.
Two ways to rune your day.
Your game boy is about to become a man.

A causal form of gaming is not necessarily bad for you. Only 9% of gamers under the age of 18 are considered hardcore gamers. Despite popular beliefs, not all kids get addicted to video games. Family entertainment games account for almost 18% of the industry. The below infographic outlines some interesting facts about gaming you may not have known. 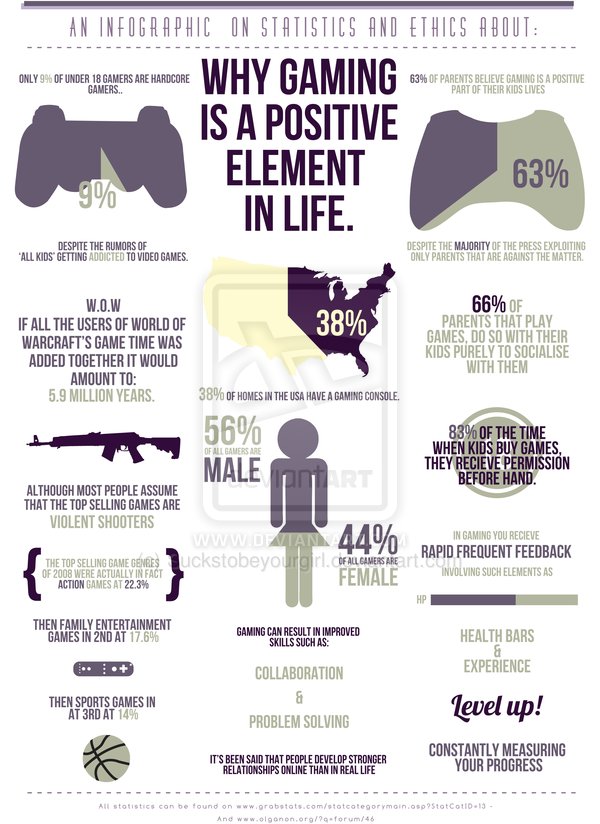