In that circumstance, LSTK would stand for “lump sum turn key.”

A third designation, EPCC, is recognized by Qatar and some other countries as well. The second “C” in the designation stands for “commissioning.”

#2. The total value of new private construction in the United States was $898.7 billion in the last reporting year. (Statista) 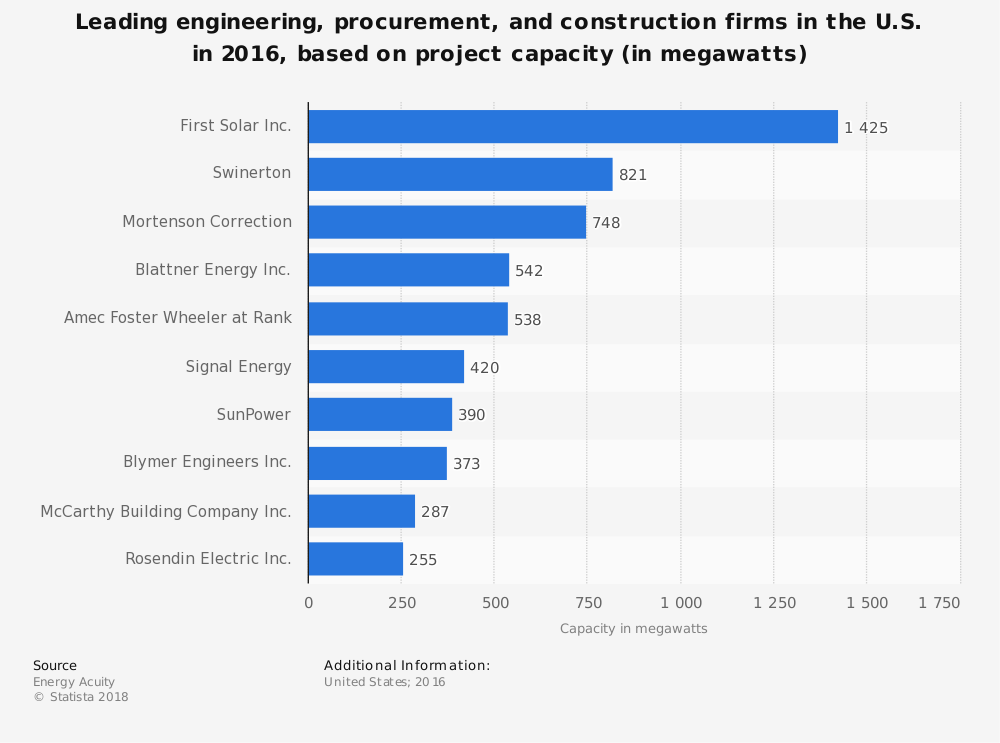 #3. Expenditures in the United States reached $1.2 trillion in the last reporting year, making it one of the largest construction markets in the world today. (Statista)

#4. Over 1.2 million new privately-owned houses were started as a project within the EPC industry in 2016. (Statista)

#5. The current value of local and state government non-residential construction in the United States is currently $251.4 billion. (Statista)

#7. To keep up with the rates of global GDP growth, about $57 trillion in infrastructure spending is required by 2030 to ensure the EPC industry is able to maintain itself. (McKinsey)

#8. If there was a 1% reduction in construction costs within the EPC industry, then it would funnel an extra $100 billion dollars of discretionary spending into the global economy. (World Economic Forum)

#9. More than 50% of construction and engineering professionals have reported at least one under-performing project within the past 12 months. (KPMG)

#11. When there is a large project undertaken by the EPC industry, it averages taking 20% longer to finish than estimated. These projects are typically 80% over-budget as well. (McKinsey)

#12. 98% of the largest projects taken on by the EPC industry come in over-budget or delayed for some reason. 3 out of 4 of these “mega projects” are least 40% behind schedule right now. (McKinsey)

#13. Labor shortages are one of the primary reasons why delays and budget overages occur within the EPC industry. 80% of active firms are unable to find the skilled workers they need to finish a job. (Associated General Contractors of America)

#14. 56% of builders working within the EPC industry say that they are having problems because of the effects caused by the presence of labor shortages. (National Association of Home Builders)

#15. The EPC industry has one of the highest turnover rates in the United States at more than 21%. In 2016, there were over 200,000 unfilled positions within the industry. (Bureau of Labor Statistics)

#17. From 2012-2015, there was a 16% increase in the number of fatalities reported from workplace incidents within the EPC industry. (Bureau of Labor Statistics)

#18. Over the last 20 years, there has been a 1% increase in the overall annual productivity achieved by the EPC industry in the United States. (McKinsey)

#19. Logistics impacts more than 50% of the issues that have a negative impact on the EPC industry. (Mechanical Contractors Association of America)

#20. 82% of firms in the EPC industry feel like they need more collaboration with their contractors to be successful. At the same time, 78% of EPC firms believed that the risks of projects are continuing to increase. (KPMG)

#21. About 30% of the initial data which is created during the initial design and construction phases of a new project is lost by the time the project reaches its closeout phase. (Emerson)

#22. 30% of the work that is performed within the EPC industry is actually rework that happened in previous projects. About 70% of this work is due to changes in design that occur over the course of a project. (CQI)

#23. Over $4 billion each year is lost in the United States because of poor document controls, which results in project rework. (City of Seattle)

#26. Around half of all companies involved with the EPC industry report spending less than 1% of their budget on technology each year. According to McKinsey, that makes the EPC industry one of the least digitized industries in the world today. (JB Knowledge)

#27. About 60% of the firms actively engaged with the EPC industry are not investigating any new technologies this year as a way to improve their revenues or profits. (JB Knowledge)

#28. 2 out of every 5 firms within the EPC industry indicate that they haven’t implemented new technologies because there is a lack of support within the industry. Budget concerns represent another 37% of industry resistance to new technologies. (JB Knowledge)

#29. More than 10% of the cost of an EPC project right now is labeled under an “other” category. When looking at these costs for the average cost of a new home in the United States, that means almost $20,000 is an unclassified cost. (National Association of Home Builders)

#30. Energy intensity within the EPC sector from a manufacturing standpoint has been steadily decreasing since 2010. From 2010-2014, the overall fuel intensity decreased by 4.4%, with real gross outputs rising at 9.6% at the same time. (U.S. Energy Information Administration)

#32. Over 92% of EPC contractors say that they plan to increase their use of global virtual teaming as a way to encourage offshoring and cost-savings efforts within their organization. (NAE)

#33. 48% of EPC contractors say that their engineering costs have a major impact on their efforts to offshore a project, with a reduction of more than 10% in total costs. (NAE)

#36. In 2016, there were about 939,000 women currently working in the construction sector in the United States. Women make up about 10% of the overall construction workforce in the EPC sector. (Bureau of Labor Statistics)

#37. 45% of women employed by the EPC industry are in a sales or office-based occupation. Another 31% of women are involved in professional development or management. Just 1.4% of women are employed in material moving, transportation, or production. (Bureau of Labor Statistics)

What is unique about the EPC industry is that it is large enough, covering engineering, procurement, and construction, that it tends to provide a cyclical offsetting experience. When construction revenues are rising, engineering and procurement revenues tend to be in decline. The opposite is generally true as well.

In 2016, total construction spending increased by 6.5% over the previous year. That reflects a pattern of growth where year-over-year comparisons found growth levels as high as 11% in 2014.

Unless there is a major disruption in the U.S. or global market, such as a change in tariff structures, expect this industry to continue performing as it has since 1980.