The typical RV will include some type of kitchen facilities. There is at least one bathroom included with the design, along with some type of sleeping facilities. Utilitarian designs may eliminate the bathroom, while luxury designs incorporate satellite reception, air conditioning, and similar features.

Although the wagons which came West during the expansion era in the United States were technically in this category, the modern RV was established in the 1920s. Even with unpaved roads and limited camping, RV owners formed camping clubs to create a product that was often referred to as a mobile home.

Today, the modern recreation vehicle may seat up to 7 or more, be the size of a bus, and is suitable for full-time living.

#1. About 40 million people in the United States are involved in RV camping, which includes backyard and car-based camping in the statistics. (Statista)

#2. About 504,000 wholesale shipments of recreational vehicles occur in the United States each year. The annual retail value of these shipments is more than $17.6 billion. (Statista) 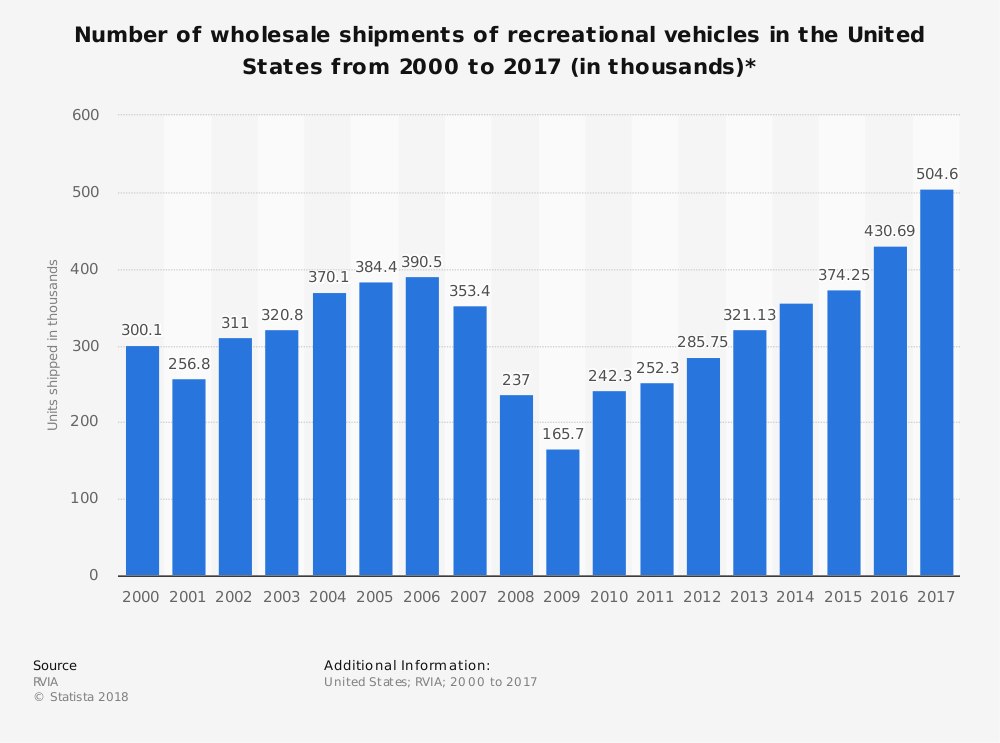 #3. When motorhomes are examined specifically, about 62,000 wholesale shipments occur annually. Another 94,200 shipments of fifth-wheel trailers occur as well. (Statista)

#4. The retail sales of recreational vehicles in Canada is C$7.56 billion each year. (Statista)

#5. 16% of Americans say that they like to take a hiking vacation which involves some form of camping. About 25% of camping participants in the U.S. are youth under the age of 18. (Statista)

#6. RV vacations are the most economical option for families of four in the United States, with some being up to 62% cheaper per day than other population vacation options. (CBRE Hotels Advisory Group)

#7. Recreational vehicles create a $50 billion economic impact in the United States each year. There are more that 23,000 firms that are directly related to the RV industry. They provide about 44,000 direct jobs, $2.9 billion in direct wages, and $16 billion in direct economic contributions. (RV Industry Association)

#8. About 9 million families in the United States currently own a recreational vehicle. Around 16,000 private and public campgrounds are available which accept RVs for camping. (RV Industry Association)

#9. There are currently 106 PMRV and RV manufacturers active in the U.S. today. There are also more than 300 component parts or accessory suppliers available to the industry as well. (RV Industry Association)

#10. More than 202,000 retail indirect loans were made to support the purchase of recreational vehicles in North America in 2017. The total amount of indirect funding reached $8.4 billion, with the average financed amount being more than $45,000. (RV Industry Association)

#11. 2017 marked the 8th consecutive year of growth for the recreational vehicle industry in the United States. Since 2009, the industry has grown by over 200%. (RV Industry Association)

#12. The park model RV segment of the industry reached a total shipment volume of 4,023 units in 2017. That reflected growth of almost 10%. (RV Industry Association)

#13. In 2017, two primary businesses within the recreational vehicle industry reported large surges in revenues. Winnebago reported a 75.1% surge in revenues, to reach $476.4 million on a quarterly earnings report. Thor Industries reported a 56.9% increase in revenues from the year before, reaching $2.02 billion. (CNBC)

#15. The price of a folding camping trailer can be as low as $6,000. Truck campers have a price range that starts at the same range. (RV Industry Association)

#18. The typical RV owner in the United States is about 48 years old, is married, and earns about $62,000 per year. They’ll own their own home and spend up to 4 weeks in their RV each year. (RV Industry Association)

#19. More RVs are owned by people in the 35-54 age demographic than any other age category. (University of Michigan)

#21. Recreational vehicle dealers manage about $23 billion in revenues each year. Since 2013, the average annual rate of growth in the industry has been 6.6%. (IBIS World)

#23. 90% of RV owners say that they take 3 or more “mini-vacations” each year outside of their primary vacation period. (RV Industry Association)

#24. Since 1980, 64% more households in the United States count themselves as RV owners, which is a record level for the industry. Even since 2001, there has been a 16% increase in RV ownership. (RV Industry Association)

#25. Conventional travel trailers are the most common type of RV owned, preferred by 22% of customers. Fifth-wheels and Type A motorhomes each represent 14% of industry ownership. They’re followed by PMRVs (12%), folding camping trailers (10%), and Type B motorhomes (9%). (RV Industry Association)

#26. 89% of consumers who purchase an RV do so as a way to help them go camping. (RV Industry Association)

#27. The 4 most-common items desired at a campground for RVs is a strong Wi-Fi connection, 50-amp service, and site-specific hook-ups. (RV Industry Association)

#28. About $5.7 billion in taxes is paid each year by the RV industry. (RV Industry Association)

#29. 19% of RV owners camp at places other than a campground. The top destination for recreational vehicle owners, however, is Yosemite National Park, with 266,000 RV visitors each year. (National Park Service)

#31. Canada accounts for over 90% of the U.S. exports that occur within the RV industry each year. They are followed by Mexico (2% of exports), Australia, the United Kingdom, and China. (U.S. Department of Commerce)

#32. Exports do not play a significant role in industry revenues for recreational vehicles. The current exports-to-shipments ratio in the industry is less than 10%. The total value of exports in 2015 was $1.2 billion. (U.S. Department of Commerce)

#33. Even in the global RV industry, U.S.-made recreational vehicles are preferred by most consumers because they offer features that are not affordable on other models. (U.S. Department of Commerce)

The recreation vehicle industry has often served as an economic indicator in the United States. When sales are strong within the industry, it is a good indication that consumers have confidence in the economy. That also means when the sales of RVs decline, like they did in 2009 to fewer than 180,000 shipments, the economy is going to be in dire shape as well.

The RV industry has repeatedly fallen, often dramatically, in advance of economic trouble. They dropped in 1999. In 2006-2007, sales declined by almost 10%, even though the GDP was still growing, sometimes at an annual rate of 4.5%.

That bodes well for current sales figures, which in 2017 reached the highest levels ever since the industry began tracking figures in 1979.

Exports will continue to hold a minimal influence on the industry. Although Japan has authorized RVs to be purchased for emergency housing, their share of U.S.-based exports is expected to remain at 1% or less. Canada will continue to drive the limited export market available to the industry.

What attracts people to the idea of RV ownership is the ability to experience outdoor activities and family time with some of the comforts of home. It promotes healthier eating habits while traveling. The benefits of having a bathroom on-board is nice as well.

Specific to the United States, most RV buyers have the interest on their financing qualify as a second home mortgage interest deductible. Changing tax laws in the U.S. may shift this benefit for some owners, however, so 2019 and beyond does have some level of uncertainty about it.

Even so, with strong sales still occurring, the RV industry looks poised to follow-up record profits and shipments with another good year in 2018.