The first sneakers were manufactured in the late 19th century, although the shoes didn’t go by that name initially. They were first called “plimsolls” because the markings of the shoe were reminiscent of the Plimsoll line on the ships hull. Initially worn for playing tennis or croquet, they grew in popularity when the British Army placed a bulk order for them in the early 20th century.

The sneaker industry is divided into several different segments based on the shoe design. High-tops will cover the ankle, while Oxfords or low-tops do not. Mid-cut sneakers provide support that is higher than a low-top, but lower than a high-top. Smaller segments, like sneaker boots, extend footwear protection up to the calf. Slip-on sneakers are a growing category too.

25% of the sneakers which are purchased in the United States come from an online retailer. People who purchase shoes for running are the most likely to purchase their shoes from an e-commerce platform. Sport leisure shoes tend to be the most popular category of sneakers, producing sales of $9.6 billion in 2017, which was a 17% increase from the year before.

#1. Sneakers provide the global shoe industry with a $55 billion secondary market. In the United States, athletic footwear sales grew by 8%, reaching a total of $17.2 billion. (Forbes) 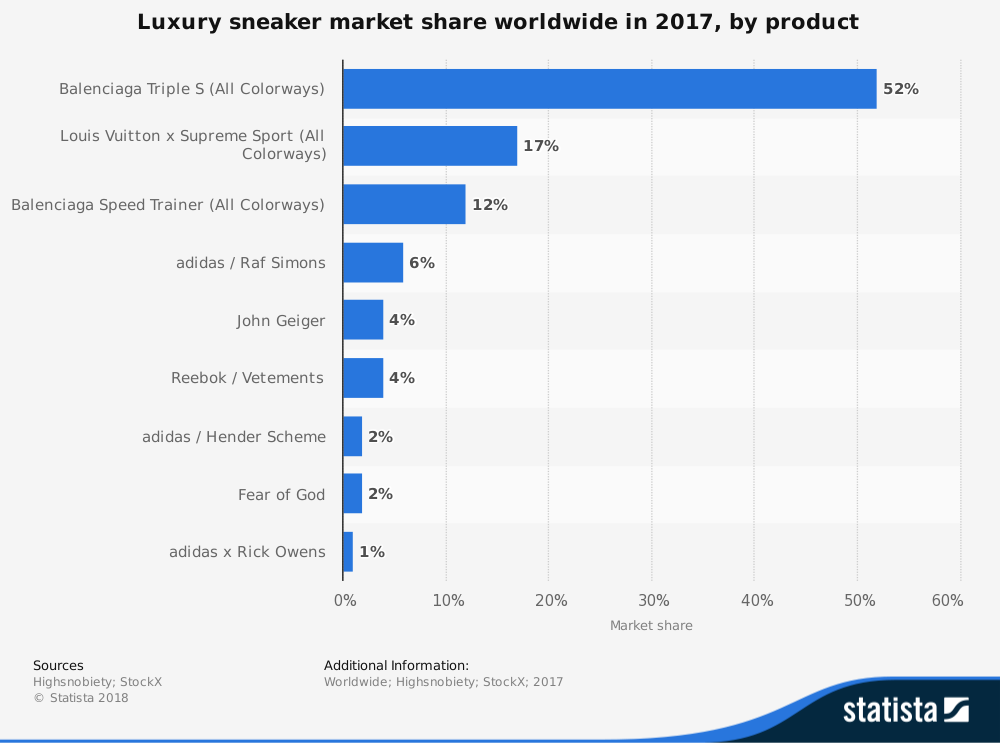 #3. Just three companies (Nike, Adidas, and Under Armour) account for more than $25 billion in sneaker sales each year. Since 2009, the revenues of these 3 firms in this category has risen by 49%. (Forbes)

#4. Millennials are driving the push for sneaker sales, with the generation spending $21 billion in footwear in 2014. That was a 6% increase from the year before, with the most significant sales increases seen in footwear priced above $100 per pair. (Forbes)

#5. The line of Jordan-branded sneakers from Nike, often retailing between $100 to $200, brought in $2.6 billion in sales in the United States alone. (Forbes)

#6. The secondary market for sneakers is estimated to bring in another $1 billion in revenues for the industry, thanks to intentionally low supplies of in-demand shoes when they are released initially. About 4% of all branded sneakers make it to the secondary market. (Forbes)

#7. 96% of the sneakers available on the secondary market are believed to be from the Nike brand. (Forbes)

#8. Women’s footwear sales in the sneaker category rose by 5% in 2017, while the men’s market and kid’s segment grew by just 1%. (Footwear News)

#9. Performance sales in the sneakers category declined by 10% in 2017, with total sales reaching $7.4 billion in the United States. (NPD Group)

#10. The fastest-growing segments in the athletic footwear category in the United States were running inspire shoes (39%) and casual athletic sneakers (24%). Running shoe sales declined by 7%, while training sneakers saw a decrease of 15%. (NPD Group) 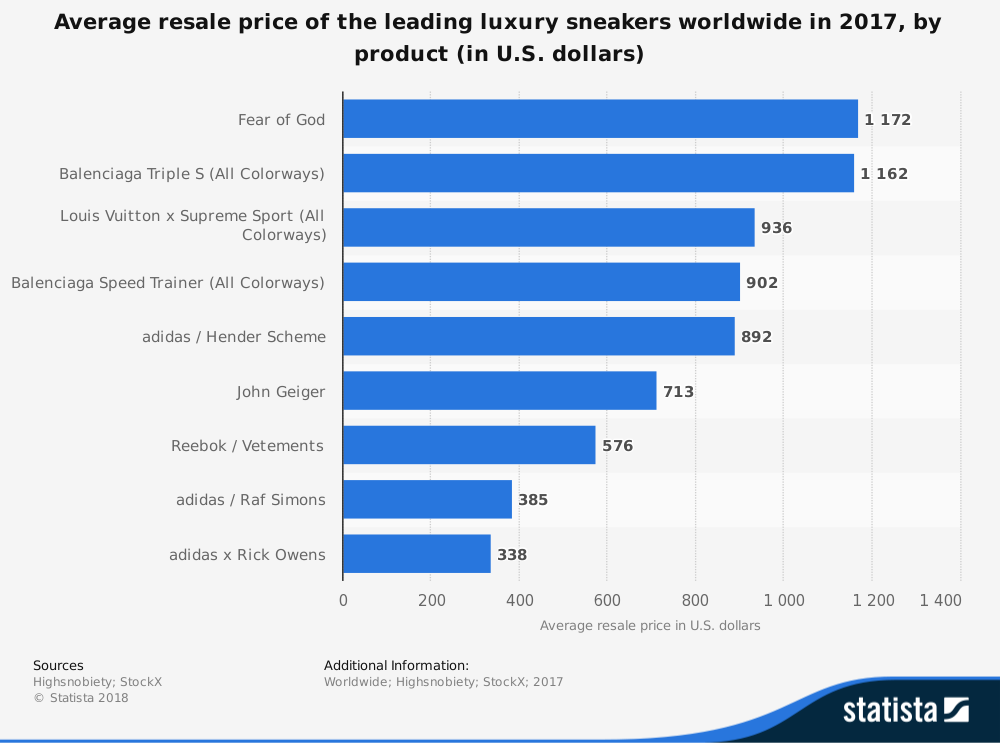 #11. Adidas saw the fastest growth in the overall market, seeing a 50% surge in sales in 2017. It was the first year that the brand offered two shoes on the Top 10 best-sellers list: Tubular Shadow and Superstar. (NPD Group)

#12. Total revenue in the U.S. footwear market in 2017 reached $79.9 billion. The Chinese footwear market began to catch up, placing second globally with $58.3 billion in sales. 54% of global shoe consumption comes from Asia. (Statista)

#13. The United States imports an average of seven pairs of shoes for every man, woman, and child each year. (Footwear Distributors and Retailers of America [FDRA])

#14. For shoppers who purchase their sneakers online, 21% said they did so because the price met or beat their expectations. 18% said they preferred the variety of inventory available online compared to what is available in stores. Only 12% said they shopped for shoes online because it was convenient. (FDRA)

#16. In the Spring of 2017, 52% of consumers said that they planned to spend less on shoes for the year compared to what they spent the year before. Only 14% said they would spend more on their shoes. (FDRA)

#18. Despite the higher levels of employment, total sales per employee dropped in 2017 to their lowest levels in six years. Each in-store worker sold just over $12,800 of product over the year. (FDRA)

#20. Retro shoes are making a comeback in the sneaker industry. Reebok’s top-selling shoe for 2017 was their “Classic Leather” model, which first debuted in 1983. Another top seller for Adidas was their Stan Smith shoe, which debuted in the 1970s. (Sports Business Daily)

#21. Nike experienced a 14% drop in the dollar share of the sneaker market in 2017, although they remain the dominant industry leader in the category with a 40% market share. Despite the 55% increase in brand share and 82% improvement in dollar share, the brand still represents just 9% of total sales. (Sports Business Daily)

#22. The consistency of New Balance sneaker is a unique disruptor for the industry. They represent a 10% dollar share of the industry, reflecting a 16% increase. (Sports Business Daily)

#23. Nike remains the most popular sneaker brand by search terms, representing 9.45% of all searches in 2017. Their Air Jordan brand placed second on the list, with 5.88% of unique searches. Adidas shoes finished third, with 5.88%. (Sneakers Magazine)

#24. Nike and their Jordan-branded shoes are responsible for about 90% of basketball shoe sales which occur in the United States each year. (PBS)

#25. 99% of the sneakers which are sold in the United States are imported from somewhere else in the world. Over 237 million of those shoes are made in China before being shipped to the U.S., representing more than 50% of the market. (PBS)

#26. Vietnam ships over 157 million pairs of sneakers to the United States each year, representing 34% of the overall market. (PBS)

#27. 47% of customers say that they purchased at least one pair of sneakers from Nike within the past 24 months, leading the U.S. industry. Adidas finished second, with 23.8% of customers purchasing a pair of shoes from the brand. These two companies were followed by New Balance (22.6%), Skechers (20%), and Converse (14%). (Statista)

#28. The secondary market for sneakers is centralized in California, with $15.4 million in sales occurring each year. New York resells $12 million worth of shoes, followed by Florida ($7.5 million), New Jersey ($4.9 million), and Texas ($4.43 million). (High Snobiety)

#30. 60% of the highest-value sneakers available in the secondary market belong to the Air Jordan brand by Nike. (High Snobiety)

#31. The Nike Air MAG Back to the Future specialty sneakers currently sell for over $5,700 on the secondary market. (Campless)

Sneakers (and footwear in general), in its purest form, is a human necessity. Shoes protect your feet against the surfaces you walk upon. If they are uneven, sharp, or coarse, the impacts made by the surface are minimal because of the construction quality of the shoes.

The modern sneaker provides more than comfort or quiet use. It is a fashion statement men, women, and kids use to show off their style – and sometimes their net worth.

Expect the sneaker industry to continue growing as brands embrace the idea of celebrity sponsorships outside of the basketball arena. Musicians, football players, and even television shows all partner with today’s top manufacturers and brands to create unique looks that people love.

By the end of the next 10-year forecast (by 2028), the sneaker segment of the footwear industry is expected to top $100 billion in the United States. It may exceed $250 billion globally if the strength of the Chinese market continues and Europe sees a similar surge in interest.

Footwear is here to stay. The only question we have to answer is one of style. Because of their comfort and fashionable looks, we expect sneakers to continue dominating the shoe industry.