One of the most significant fears experienced by the financial advisor industry right now is the process of automation. Because 85% of households in the United States are not being served with relevant advice from the industry right now, reaching out in unique and innovative ways may replicate what happened when ATMs were introduced in the 1970s.

People feared that bank tellers would lose their jobs because of the services that the automated equipment could provide their customers. The reality turned out to be that there was an increase in the demand of human workers, rather than a decline because the efficiency of the technology helped to expand the reach of each worker.

That’s why the number of opportunities in this field is up despite the numerous challenges that the industry faces today. Financial advisors are aging, but then so are their clients. Women are desperately needed in this field as well since they represent just 15.7% of the employees in this field.

There are millions of people who could use the help of a financial planner, and 40% of the current advisors under employment contracts today plan to retire in the next 10 years.

#1. The retirement of Baby Boomers in the financial advisor industry is creating a need for new wealth managers in the younger generations. 56% of industry professionals are age 50 or above for the industry right now, compared to just 5% who are under the age of 30. (Ernst and Young)

#2. Generations X and Y are expected to accumulate roughly $46 trillion in assets by the end of 2020, which includes $18 trillion in inheritances from their parents who were Baby Boomers. (Ernst and Young) 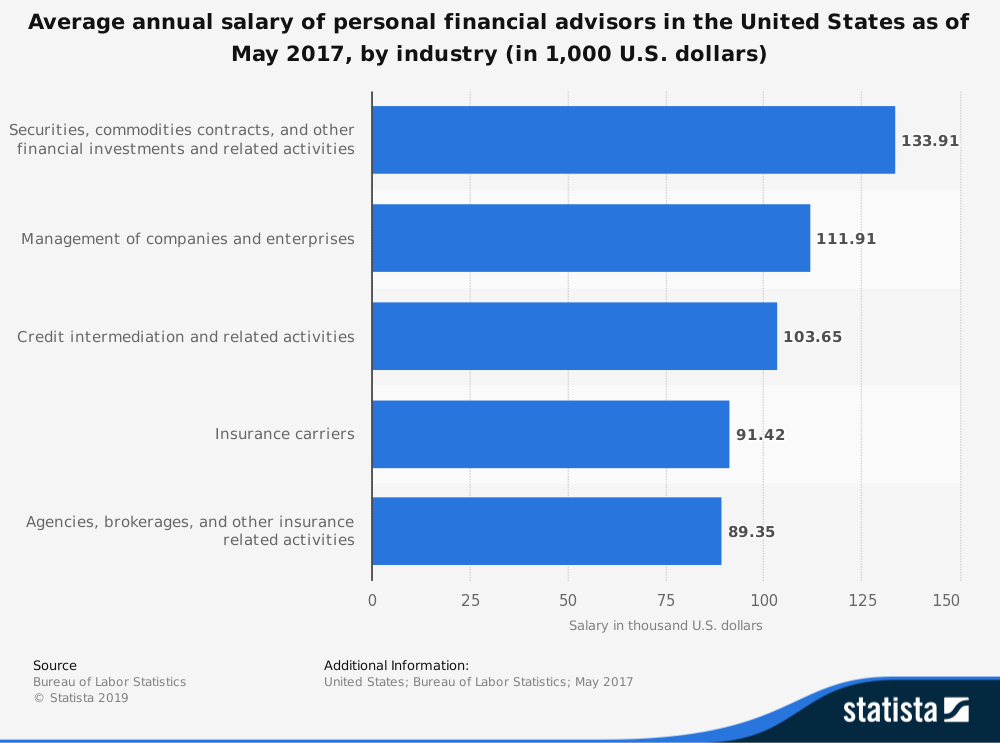 #3. The average age of a financial advisor in the United States is now 50 years old, and that figure continues to rise. Only one in five financial advisors right now are under the age of 40. (Ernst and Young)

#4. For every graduate who comes through a financial planning collegiate program and enters the industry, there are two advisors that will become eligible for their Social Security benefits for the first time. (Ernst and Young)

#6. One-third of Americans have no retirement savings at all right now. Another 50% of them have less than $10,000 saved in their bank accounts. (Investment News)

#8. Financial planning and advice is an industry which has seen a tremendous level of value growth since 2013, achieving an average annualized rate of 6.4% to total $57.6 billion. (IBIS World)

#9. There are currently 55,000 businesses that are active in the United States in the activities of financial planning and advise, with industry employment improving by 3.6% since 2013. The number of firms that are currently doing business in this industry has risen by 3.6% as well. (IBIS World) 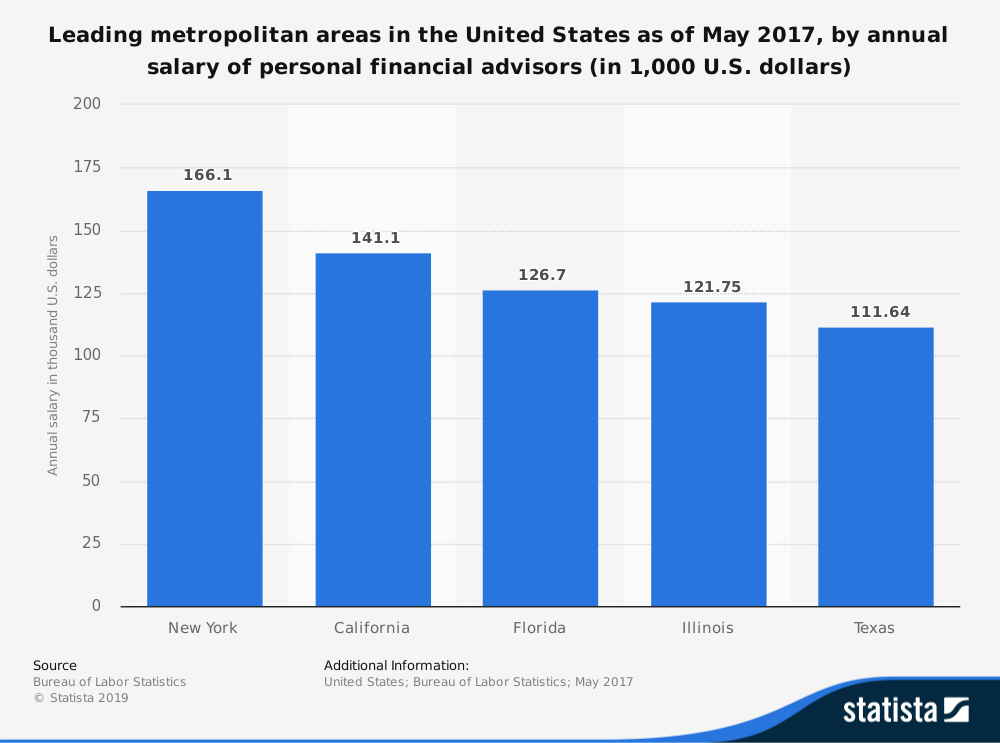 #11. Women who are above the age of 65 are three times more likely than men to be widowed, while 46% of them who are over the age of 75 find themselves living alone. (AICPA)

#12. 55% of women who are between the ages of 25 to 34 say that they prefer to work with other women who are employed as a financial advisor. (AICPA)

#13. Only one-third of women in a recent Prudential survey said that they were ahead or on-track for their retirement plan. (AICPA)

#14. During the first half of 2018, 16 of the top 20 funds by net flows were passive mutual funds and ETFs, garnering $143 billion. That means the priorities for long-only managers in the industry are more acute than those who operate more as an alternative manager. (Deloitte)

#16. Over 86% of the active funds in the United States have underperformed their benchmark on a net-of-fees basis since 2007. Europe has seen similar results, with roughly 85% of their equity funds underperforming benchmarks during the same period. (Deloitte)

#17. From 2014-2017, the leading investment managers were able to increase their median operating margins to 35%, outperforming their peers by 4 percentage points while managing a combined $35 trillion in financial resources. Continued success allows them to leverage a 19% fee premium relative to the competition. (Deloitte)

#18. There were more $1 billion deals in acquisitions during the 2018 investment year than the previous five years combined in the financial advisor industry. (Deloitte)

#19. The growth potential of the Chinese market for financial advice continues to remain largely untapped. It held a value of $250 million in 2006, but by 2018, it contributed $30 billion to the global industry. (Deloitte)

#20. Five of the leading eight mutual fund distributors have dropped more than 4,900 funds from their platforms since 2016. These firms dropped the number of funds offered by an average of 28%. (Deloitte) 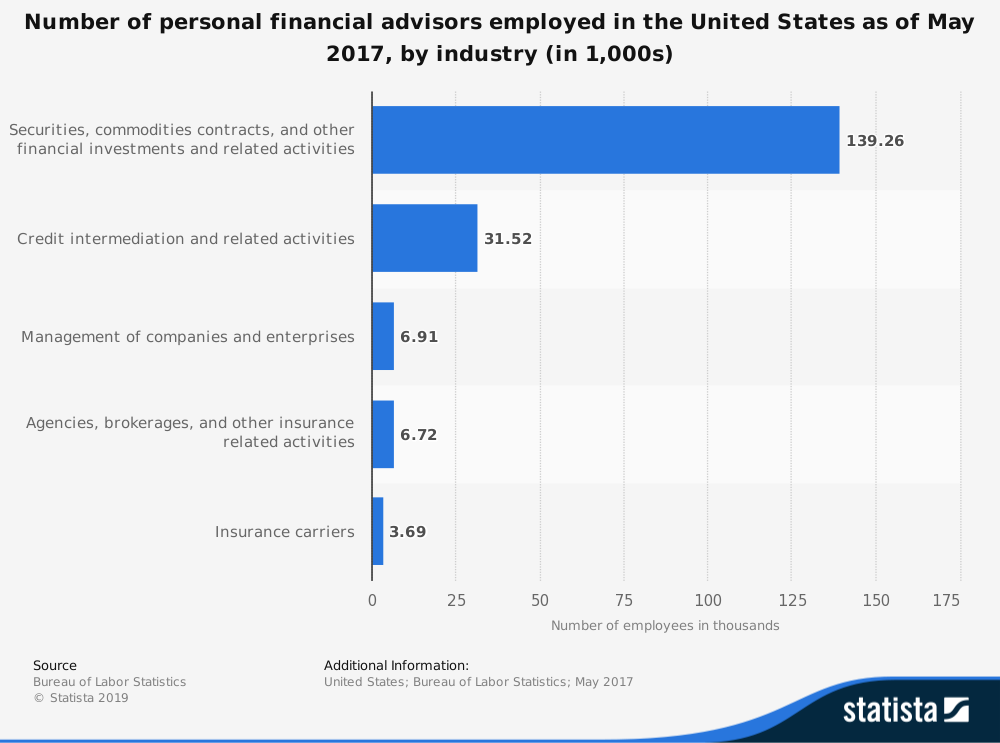 #21. The total number of assets under control of the financial advisor industry rose by 16.7% from 2017 to 2018, an increase of nearly $12 trillion over that time. (Financial Advisor Magazine)

#22. There are more than 34 million clients working with the global financial advisor industry, with over 12,500 firms managing their financials. (Financial Advisor Magazine)

#23. The financial advisor industry is helping 20% more clients than they were in 2013, with a global boost of 14% more employees available to help meet the needs of even small investors now. (Financial Advisor Magazine)

#24. High-net-worth clients in the financial advisor industry make up just 12.3% of the total clientele. Advisors are managing about $10 trillion in wealth on behalf of this one demographic. (Financial Advisor Magazine)

#25. The largest investment advisors, or those who manage over $100 billion in regulatory assets, grew at a faster pace than smaller advisors since 2013. (Financial Advisor Magazine)

#26. Most of the SEC-registered investment advisors in the United States qualify as a small business, with 57% saying that they employ ten or fewer non-clerical employees. 87.5% of these firms also report that they employ 50 or fewer people. (Financial Advisor Magazine)

#27. The 108 largest firms in the financial advisor industry are employing over 52% of all non-clerical employees employed in this sector globally. (Financial Advisor Magazine)

#29. About 14% of the financial advisory firms which are active in the industry today have encountered at least one disciplinary issue from their work. (Financial Advisor Magazine)

A lack of funds available from their clients, along with shifts in their fee schedules, will create challenging times for the financial advisor industry in the days to come. There are already numerous platforms which allow individuals to take a self-direct approach that encourages more saving and investing, but it is a service that only 30% of advisors currently offer to their full-service clients.

There is also the aging crisis within this industry to consider as well. As current financial advisors begin to retire, there will be a plethora of job opportunities available for the younger generations. The difficulty here is that the number of new experts joining the field is much smaller than those who are leaving it. There are only two possible outcomes here: those future financial advisors will be juggling a heavier client load, or there will be higher wealth thresholds required to get involved with the industry.

People need to save and invest in building wealth. They’ll need help to make their financial goals become a reality. There will always be a place for this industry. What it will look like in the next 10 years, however, is anyone’s guess because of the various transitions which are currently taking place.