Consumers spend over $5.3 trillion on retail and food service products each year. Leading food retailers in the United States include Kroger, Costco, and Walmart. Excluding Sam’s Club and Walmart International sales figures, Walmart contributed over $307 billion to the retail grocery industry in 2017, with over 4,600 locations providing services.

The average household in the United States makes 1.5 trips to a retail grocery location each week. Compared to the traditional supermarket, consumers spend 2.5 times more at warehouse clubs, where the average transaction is almost $89. Most consumers also prefer to shop in person, even though online grocery shopping has been available for more than a decade.

#1. There are currently 4.8 million people employed by the retail grocery industry in the United States. (John Dunham and Associates)

#3. There are more than 38,000 grocery stores and supermarkets in the United States which experience more than $2 million in annual sales each year. (Progressive Grocer Magazine)

#4. The net profit for the average location operating within the retail grocery industry is just 1.1%. (Food Marketing Institute)

#5. The average grocery store in the United States provides over 41,000 square feet of shopping space for consumers. That creates an average weekly sales figure for each store of just under $400,000. (Food Marketing Institute)

#6. The average family spends 5.5% of their disposable income on food at retail grocery locations, which is slightly higher than the 4.3% spent on food away from home that is not related to grocery purchases. (U.S. Department of Agriculture)

#7. In 2016, retail grocery locations were able to achieve a weekly sales per square foot rate of $11.89. The average customer transaction in the U.S. at a grocery store or supermarket was $30.02. (Food Marketing Institute) 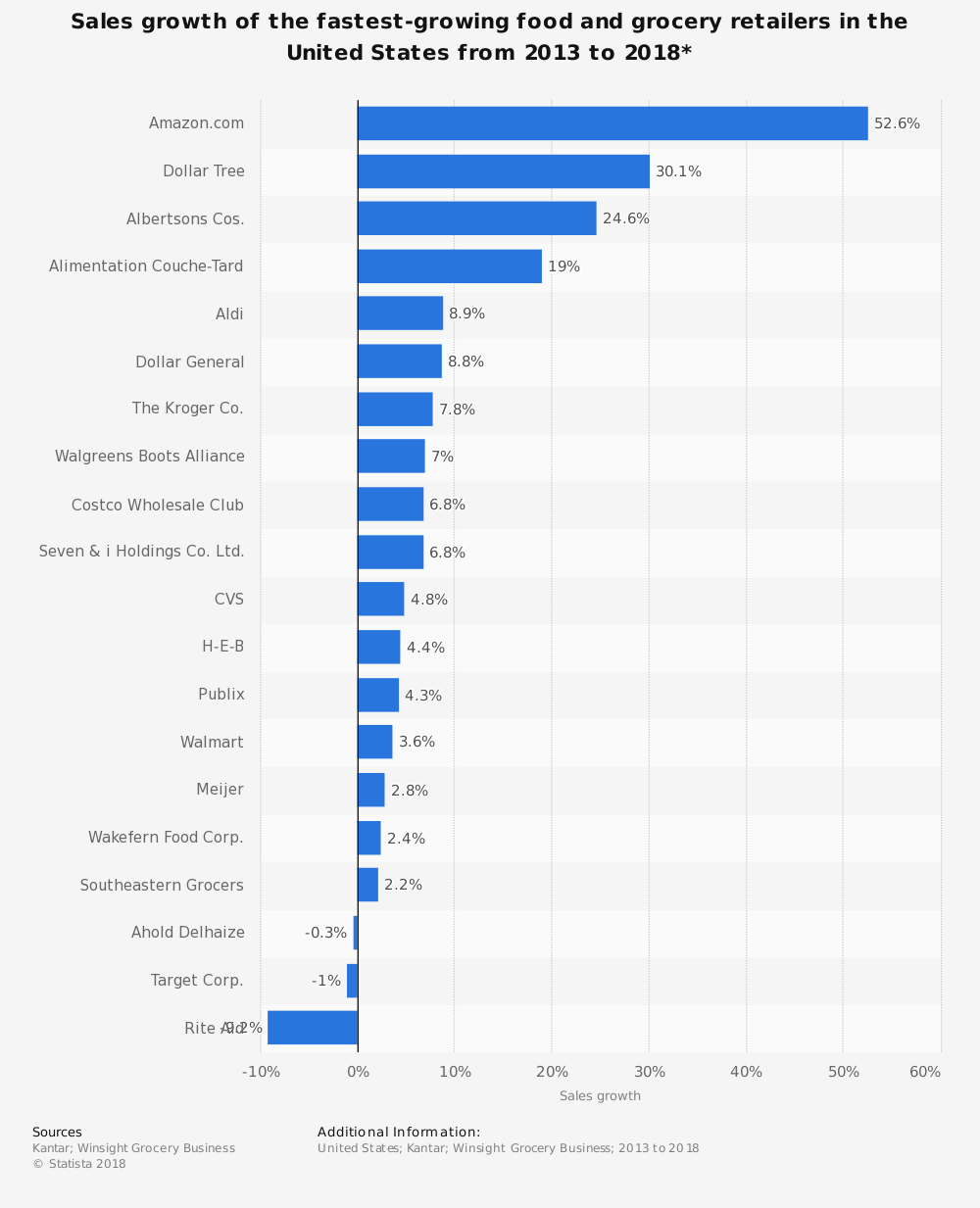 #15. In 2017, the online grocery sales generated in the United States were just over $14 billion. About 31% of consumers in the U.S. say that they are likely to purchase their groceries online. (Statista)

#16. In a 2016 survey, 72% of consumers said that they had tried online grocery shopping and that their experience was “positive.” (Statista)

#17. Just 9% of retail grocery shoppers say that they have purchased groceries online at least 1-2 times per month during 2017. (Statista)

#18. Millennials are the most likely to use internet resources to purchase groceries, with 6% of their purchases coming through an online forum. (Statista)

#19. Meal kits are a growing trend in the retail grocery industry as well. The market has a current value of $2.2 billion, with companies like Blue Apron and Plated delivery ready-to-make meals through the mail. This segment of the industry is expected to see growth of up to 30% in the next 5 years. (Forbes)

#20. In-store bars and dining areas, similar to what Costco offers, are expanding into other areas of the retail grocery industry as well. Giant Eagle Inc. offers events like a “Food and Wine Friday,” where consumers can shop for groceries and pay $5 for a wine glass to enjoy samples throughout the store. (Forbes) 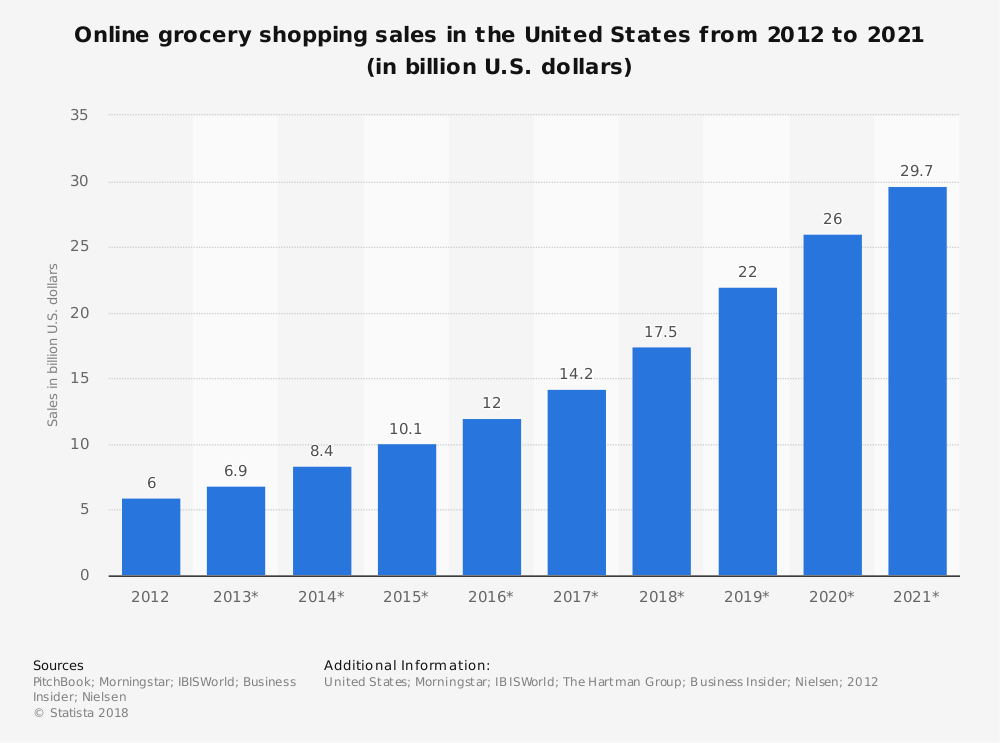 #21. 50% of U.S. households say that a supermarket is their primary shopping location for groceries, with the average family spending $110 per week on food to prepare and eat at home. (Statista)

#22. In 2017, there were 2.75 billion coupons redeemed at retail grocery locations, with one in three people saying that they look for coupons frequently online for their food purchases. (Statista)

#23. 21% of people say that they frequently use coupons for their food delivery purchases. (Statista)

#24. The average order value of e-commerce grocery stores is $166, with Peapod leading the way in this market segment. (Statista)

#25. 83% of consumers say that they regularly visit between 4-9 different chain stores over the course of a year to purchase their groceries. Just 1% of consumers said that they were loyal to a single retail grocery location. (Supermarket News)

#26. 94% of Millennials say that they trust the foods they purchase from a retail grocery location are safe, which is 3% higher than 2016 figures. (Food Marketing Institute)

For the average household in the United States, 5.9 hours per week will be spent on cooking food that was purchased from a local retail grocery location. These households will spend about $4,000 on food make at home, while spending over $3,100 on food away from home.

Look for grocery stores to continue finding new ways to market ready-to-eat foods that require minimal prep time to take advantage of the higher costs of restaurant food. Pre-cut vegetables, fruits, and pre-seasoned meats will continue to find new shelf space at the retail grocery level. New foods that may be difficult for consumers to access normally, such as dragon fruit or rambutan, will also hit store shelves.

The retail grocery industry is a mature industry with stable income, a slim profit margin, and plenty of consistency. Consumers will continue to visit these stores because we all have the need to eat regularly. The stores which offer convenience, fresh foods, and affordable pricing structures will see the greatest growth benefits in the years to come.