The first integrated circuits that could be classified as a microprocessor were invented in 1959. Three employees from the company responsible for this invention would resign and start their own company in 1968 called Integrated Electronics.

They were Andrew Grove, Gordan Moore, and Robert Noyce. Their new company would become known as Intel. They would produce their first microprocessor in 1971. This first-generation microprocessor operated at a speed of 108 KHz and was a TTL-compatible processor.

Today, the world’s fastest processor produced a speed of 8.429 GHz, thanks to the help of some helium and nitrogen to keep it cool.

For the standard PC, laptop, or mobile device, a 3.4 GHz processor, with boost speeds up to 4 GHz, are currently serving at or near the industry best for home-use speeds.

#2. Global sales of microprocessors totaled $409 billion in 2017. This revenue figure was a 20.6% increase from sales from the year before. (Statista) 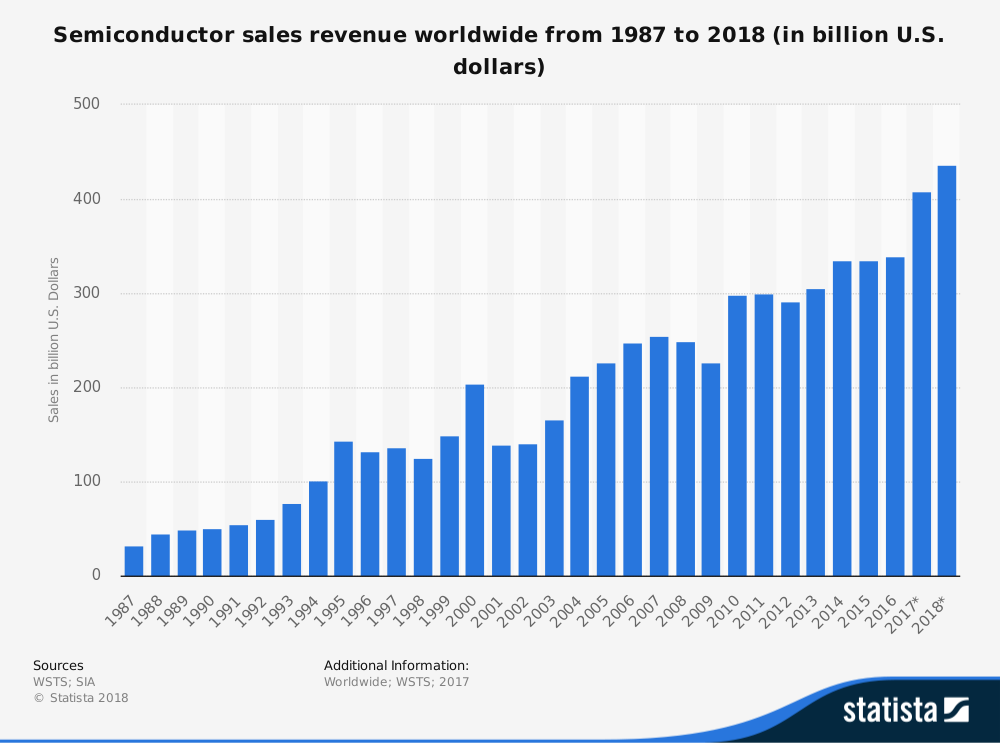 #4. Revenues for Intel that are based in the United States totaled $12.5 billion in 2017. That helped the company be able to generate a net income of $9.6 billion. More than 102,000 employees are directly employed by the company. (Statista)

#5. Intel holds a 68% share of the graphics chips market within the microprocessor industry right now. In comparison, Nvidia holds a 19.3% market share. (Statista)

#6. The largest share of the microprocessor market is for data processing needs. About $140 billion in global billings was produced for this segment in 2017. Communications needs were second, with $115 billion in global billings. They were followed by industrial needs at $45 billion, consumer electronics at $43 billion, and automotive needs at $37 billion. (Statista)

#7. 50% of the semiconductors that go into today’s microprocessors are manufactured in the United States. Another 17% of production is handled by South Korea. Japan comes in third, providing 11% of the market. (U.S. Department of Commerce)

#9. About 17.1 billion semiconductors are manufactured each year in the U.S., most of which are destined to be part of the microprocessor market. (U.S. Department of Commerce)

#10. In 2017, 53% of the microprocessors sold were computer CPUs. 32% were in tablets and smartphones, while the remainder was placed in embedded processing. Since 2012, computer-based CPUs have decreased by 9% while mobile sales have increased 6%. (IC Insights) 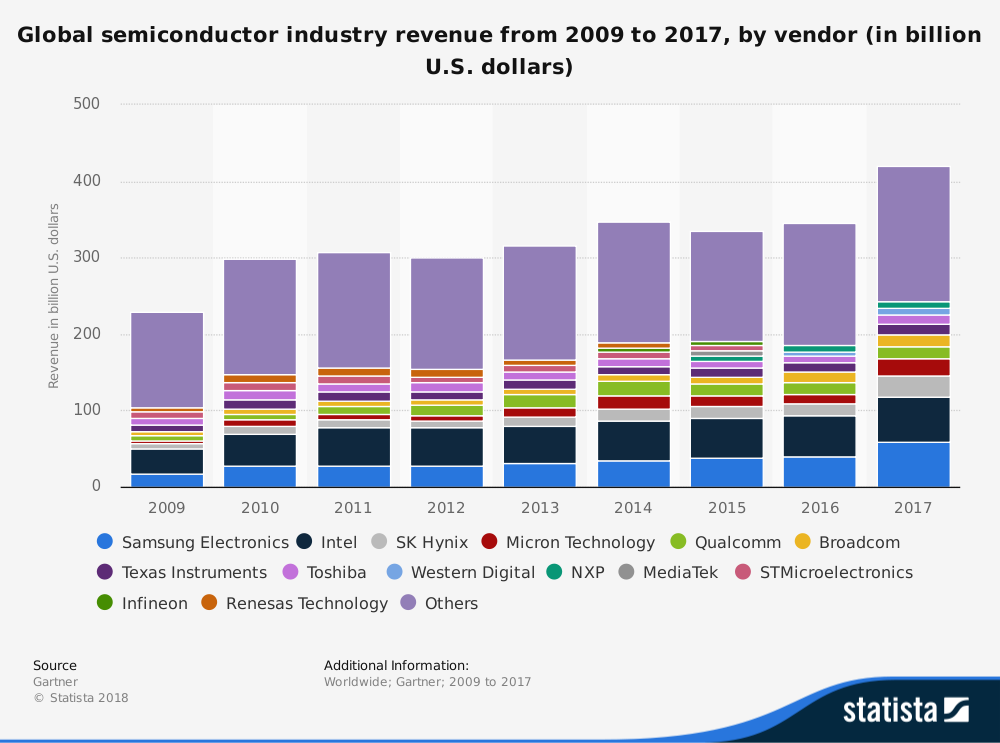 #11. Of the embedded microprocessors sold, 4.1% are used for industrial or medical needs. Another 3.8% are used as network processors. (IC Insights)

#12. The Intel 4004 is regarded as the first commercially-viable microprocessor manufactured. It retailed for $60 at the time it was invented, which would be the equivalent of $362 in today’s funds. (Forbes)

#13. The United States imports about $51.6 billion in semiconductors and related devices each year. The total market value for semiconductors in the Americas is valued at more than $86 billion. (Statista)

#14. The global market share of PC microprocessor vendor Intel is over 76%, even though Samsung generated about $1.3 billion more in semiconductor revenue compared to Intel. (Statista)

#15. Qualcomm spends about $3.5 billion each year on research and development within the industry. (Statista)

#16. About 470 million graphics chips are sold annually in the global microprocessor industry. (Statista)

#17. 50% of the top 20 companies involved with the microprocessor industry are located in the United States. (Congressional Research Service)

#18. About 90% of the fabrication work that is required for the global microprocessor industry is based outside of the United States. (Congressional Research Service)

#19. There are about 800 firms currently involved in the U.S.-based microprocessor manufacturing industry. These firms contribute about $30 billion each year in direct revenues to the economy. Combined, they are responsible for around 1% of the total manufacturing output of the United States. (Congressional Research Service)

#21. About 85% of the fabrication capacity in the global microprocessor industry is located in China, Japan, Taiwan, or South Korea. By themselves, South Korea and Taiwan are responsible for half of the worldwide available capacity in any given year. (Congressional Research Service)

#22. Intel is the only major microprocessor manufacturer that bases a majority of is fabrication needs in the United States. About 70% of the microprocessors which are produced by the company are built in the U.S. each year. (Intel)

#23. About 30% of the microprocessors which are exported from the United States are exported a second time to another country. Depending upon the final use of the product, some microprocessors may be re-exported 5-7 times before reaching its final destination. (Congressional Research Service)

#25. More than $40 billion is spend on capital equipment expenditures within the microprocessor industry each year. (Statista)

As long as we have a need for computers, we will have a need for the microprocessor industry to supply us with the power we need to process information. As technologies improve and speeds grow faster, cheaper product prices will help to bring more people into the industry. That means more customers, which ultimately means more revenues.

There are two major players in the microprocessor industry right now. About 77.5% of all tests for performance were records from devices manufactured by Intel. About 12% of the devices were recorded from AMD microprocessors.

Since 2008, when the global microprocessor market topped 10 billion units for the first time, most new units have been embedded into their final product in some way. About half of the cost of manufacturing goes toward desktop or laptop computers each year, even though these products account for just 2% of the total number of microprocessors sold.

We are able to do what we do because of microprocessors. Traditional computing uses may be slowing, but mobile device manufacturing is increasing, which means there should be continued growth in this industry for the foreseeable future.