The processes required to create ethanol have been around for more than 100 years. Until the 1970s, however, there were no real incentives to create this alternative fuel. It wouldn’t be until the global oil crisis, with its high fuel costs, compared to the low sugar prices of the time, that ethanol would be explored.

Since 1975, the Brazilian National Ethanol Program has been the foundation of the local ethanol industry. In the earliest days of the industry, it saw higher production levels compared to those in the United States.

By 1985, more than 11 billion m3 was being manufactured by the industry. Although the industry has lagged behind the U.S. industry in recent years, it is still consistently one of the top producers of ethanol in the world today.

#1. The total level of ethanol fuel production in Brazil in 2016 was 7.295 million gallons. That placed the Brazil ethanol industry in second, behind the United States, in total ethanol production. (Renewable Fuels Association)

#2. Since 2013, the Brazil ethanol industry has produced more than 6 million gallons of ethanol fuel each year. (Renewable Fuels Association) 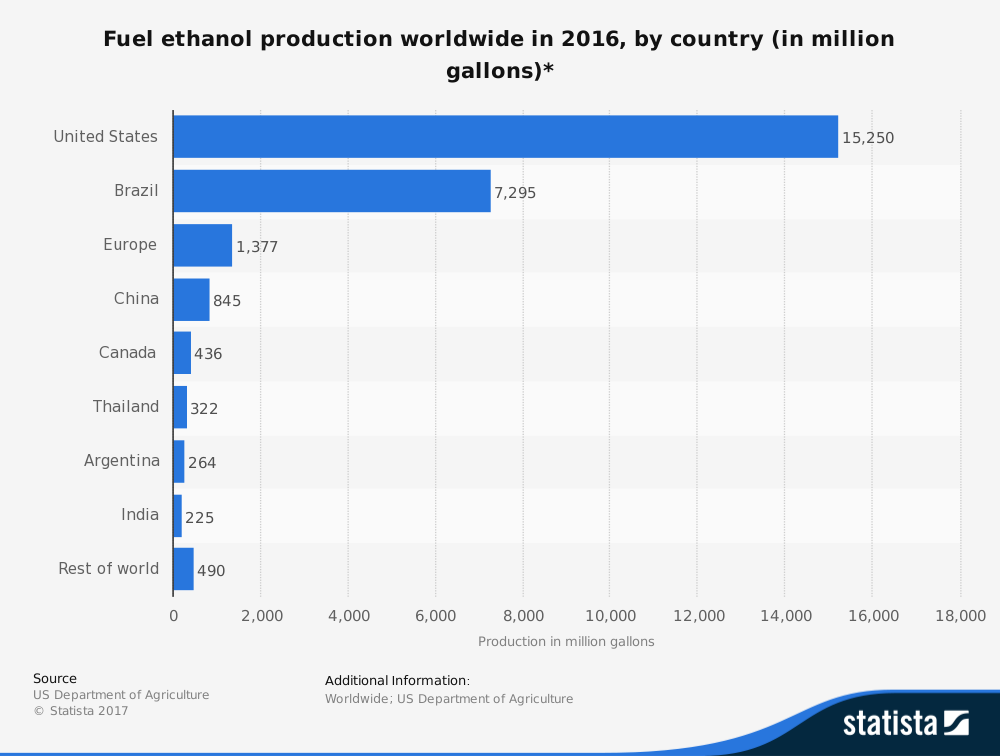 #3. The last year that Brazil was not in second place for ethanol production was 2012, when South Africa achieved 223,000 more gallons of fuel production, dropping the industry to third place globally. (Renewable Fuels Association)

#4. When Brazil’s ethanol production is combined with production values from the United States, the two nations produce 85% of the world’s ethanol supply. (Alternative Fuels Data Center)

#6. From 2016 forecasts, the GDP for ethanol in Brazil was expected to expand by 0.5%. Local forecasters in Brazil offered rates as high as 1.13%. (Reed Business Information)

#7. Since 2015, the standard blend of fuel in Brazil has risen from 25% ethanol to 27% ethanol. With global increases in blending expected, this could triple the consumption of biofuels by 2040. 65% of consumed biofuels are currently an ethanol product. (Reed Business Information)

#8. 68% of the Brazilian fleet of light commercial vehicles are flex-fuel models. In total, there are 16 automakers that have offered more than 240 different models to the Brazilian market to take advantage of the local ethanol industry. (Reed Business Information)

#9. Sugarcane in Brazil has an annual yield of up to 870 gallons of fuel for every acre of sugarcane that is harvested. At the same time, this creates a greenhouse gas savings of up to 96% when compared to petroleum-based fuels. (Stanford University)

#10. Brazilian distillers are able to produce ethanol for $0.22 per liter using sugarcane. U.S.-based distillers can only achieve $0.30 per liter with their corn-based ethanol. (Stanford University) 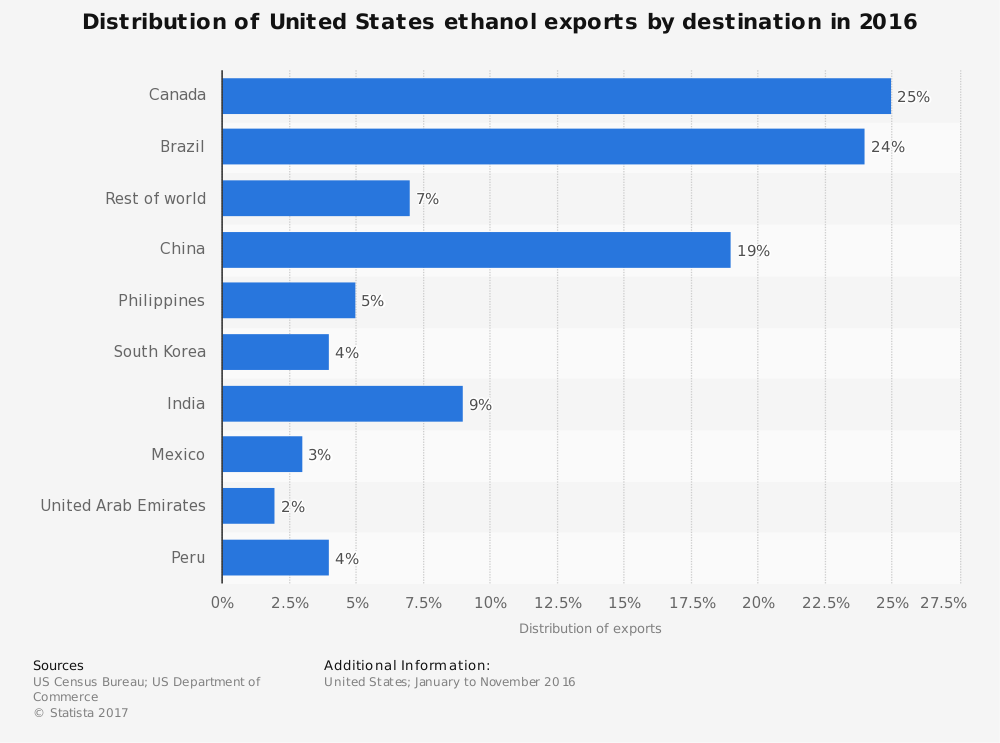 #12. Most of the sugarcane produced for the Brazil ethanol industry comes from the southern part of the country. Sao Paulo, for example, produces 60% of the sugar for the country and 70% of sugar exports. (Agricultural Marketing Resource Center)

#13. Sugarcane that is used for ethanol can provide 5 cuttings over 6 years. (Agricultural Marketing Resource Center)

#14. Just about all of the ethanol that is produced in Brazil is purchased by the local market. All gasoline sold in Brazil has a minimum blend of 18%. (Sugarcane.org)

#15. The Brazil ethanol industry has replaced over 40% of its gasoline fuel needs with ethanol produced from sugarcane. (Sugarcane.org)

#16. 90% of new vehicles that are sold in Brazil today are flex-fuel vehicles. (Sugarcane.org)

#17. Since 2003, the Brazil ethanol industry has helped the national production of carbon dioxide emissions be reduced by over 350 million tons. That’s like having 2.5 billion trees planted, and then maintained, for over 20 years. (Sugarcane.org) 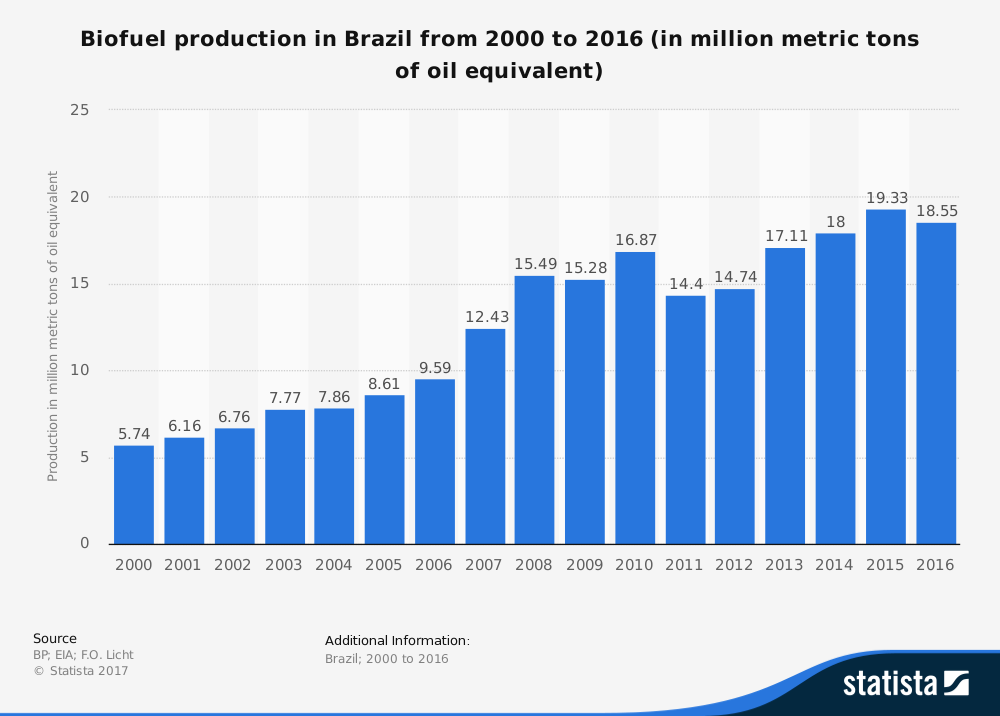 #21. Just 0.2% of the sugarcane that is produced for the Brazil ethanol industry is grown within the confines of the Amazon forest. (Sustainable Ethanol Initiative)

#22. About 65% of the acreage expansion for sugarcane products destined for the ethanol industry occurred on degraded pastures in the central and southern states of Brazil. (Sustainable Ethanol Initiative)

#23. Sugarcane that is for ethanol production only occupies about 3.4 million hectares of space in the country right now. That’s about 1% of the total land that is classified as arable farmland within Brazil. (Sustainable Ethanol Initiative)

#24. Just 1% of agricultural land reserved for ethanol has allowed Brazil to replace nearly half of its total gasoline needs. (Sustainable Ethanol Initiative)

The future for the Brazil ethanol industry looks to be quite strong. Many top producers use corn as the main fuel supply, which Brazil does not use. That means other industries will be forced to transition to other products while the local ethanol industry is able to maintain its abundant supply. During the transitionary period, it is entirely possible that Brazil could take over the top spot.

Why is it so important to transition off of corn? For starters, sugarcane ethanol is more production. One acre of sugarcane can produce twice as much ethanol as corn. Corn starch must be converted into sugar before it can be used to create ethanol as well, which increases its cost and the time required for the fuel to hit the market.

Times are changing. The world is moving away from fossil fuels. Ethanol is a viable alternative and the Brazil ethanol industry is a strong provider. It has even moved away from government subsidies, which the U.S. market has not accomplished. From a long-term perspective, that makes it perhaps the strongest sector of its industry.