India’s powerloom industry has almost always been one of the pillars of the domestic economy. It drives employment and foreign exchange earnings better than any other current industry. When indirect employment figures are tallied, nearly 7 million jobs are supported by this industry every year. An estimated 60% of Indian cloth is produced through the decentralized power loom sector making it a lifeline to its textile industry.

#1. The powerloom industry contributes about 70% of the jobs that are available within the textile industry in India. (India Brand Equity Foundation)

#2. The industry has over 2.4 million registered powerlooms that create more than 28,000 square meters of fabrics every year. The industry is generally clustered around Solapur, Malegaon, Erode, Salem, and Madurai, among other locations. (India Brand Equity Foundation)

#3. The United States and the European Union account for over 67% of the textile imports that are generated by the powerloom industry. (India Brand Equity Foundation)

#4. The domestic apparel and textile market from the powerloom industry is forecast to reach $141 billion by 2021 in India. (India Brand Equity Foundation)

#5. Up to 90% of the industry is composed of small and medium-sized businesses, employing a total of 7 million people and more than 30,000 processing units. (India Brand Equity Foundation)

#6. In India, the domestic consumption of plastic-based products is expected to reach 20 million metric tons by 2020. (India Brand Equity Foundation)

#8. The Indian plastics industry offers a current production capacity of 5.72 million tons, though these figures are from 2009. The State of Gujurat is the primary center for the industry, with more than 5,000 firms being located there. (British Plastics Federation)

#9. The electricity demand deficit for the powerloom industry averages about 13% each year. When combined with labor shortages, it can be difficult for many of the smaller firms in the industry to achieve maximum production levels. (British Plastics Federation) 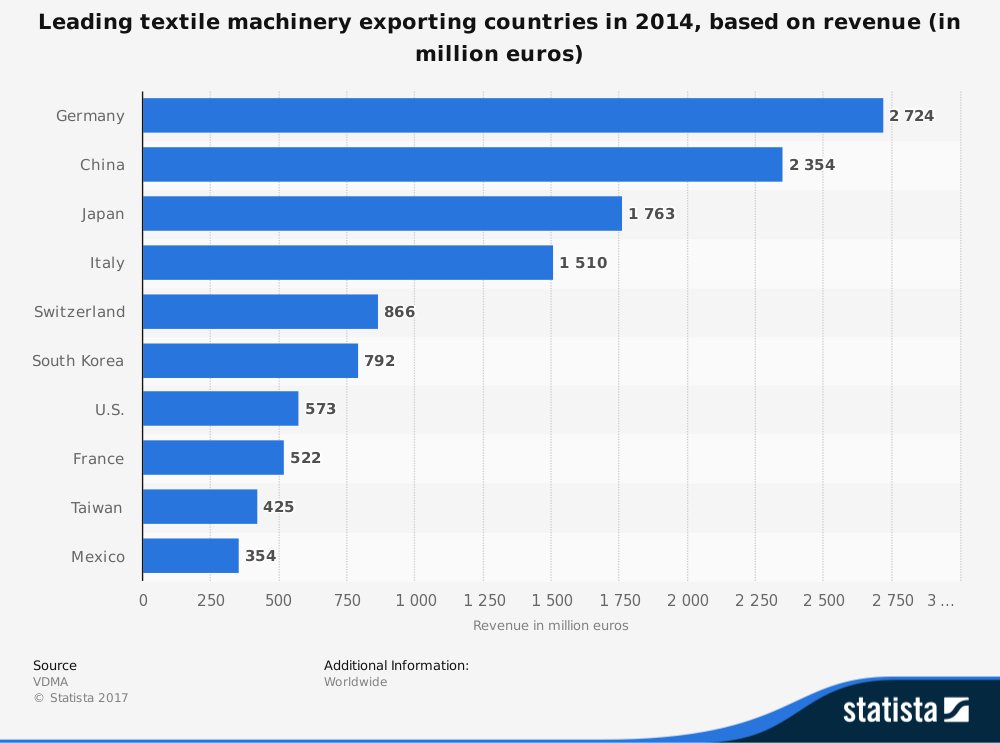 #11. Maharashtra has the highest number of powerlooms that are in consistent operation, with up to 8 lakhs at any given time. (Fiber to Fashion)

#12. Textiles make up about 15% of total exports for India each year. It also accounts for 14% of industrial production within the country. On the average year, that equates to about 4% of the GDP. (India Brand Equity Foundation)

#14. When indirect jobs are factored into the powerloom industry, up to 45 million people have their employment supported in some way. (India Brand Equity Foundation)

#15. The current textile industry in India is valued at $120 billion and is forecast to reach $230 billion by 2020. (India Brand Equity Foundation)

#16. The installed spindle capacity in India contributes 24% of the market share globally. As for cotton yarn produced, the industry accounts for 25% of the current world trade. (Indian Textile Magazine)

#17. Many of the powerloom clusters that are fond in India are still using plain looms, which is considered an obsolete technology. At maximum capacity in India, a plain loom can produce 80 meters of fabric each day. Automatic looms are able to produce six times more fabric with lower maintenance and depreciation costs. (Textile Value Chain)

#18. Most of the weavers who are actively involved in the powerloom industry got their start through self-financing. That makes it difficult for modernization to occur within the industry as there isn’t sufficient capital available. (Textile Value Chain)

#21. India has the world’s highest loom capacity in the world, accounting for a 63% market share. (BizVibe)

#22. The ready-made garment sector is the largest contributor to the apparel and textile market for India. When exports are considered alone, this sector represents over 40% of the total exports.

#23. The technical textile industry in India is forecast to achieve a CAGR of 9.6% through 2023, with a total annual value of $32 billion. To support this growth, the government has established 75 training centers to help with apparel creation and design to offset skilled labor shortages. (BizVibe)

To continue being effective, the powerloom plastics industry must work on modernization. Even in 2001, the number of modern looms in Thailand and Indonesia were more than double the number that were found in India. When all shuttleless looms are taken into account globally for all industries, India ranks just 9th.

Labor changes are also going to affect the industry as a whole. The U.S. and the EU have benefitted from lower labor rates with the exports that are available through the powerloom industry. As workers achieve better working conditions, better wages, and added benefits, the cost of these exports will increase. If the export markets are unwilling or unable to adapt to these changes, there could be sharp reductions seen within the industry.

Infrastructure challenges are another concern. Poor roads, water availability, warehouse storage, and other logistical issues create major impacts on the industry in its current format.

On the whole, the forecast for the powerloom industry looks quite positive. Domestic market shares are increasing. Millions have their employment sustained by it. If the industry can match the growth rates of the overall plastics industry in India, then it should have a bright future ahead of it.