Headphones suddenly became popular in 2012. The New Yorker pointed out in a 2016 piece which examined the industry, there was a 32% surge in revenues for headphones that occurred. Much of that demand came about because of an increase in the number of smartphones and similar devices that could play audio through wired or Bluetooth connections.

Headphones are something that is owned in multiples as well. In 2014, Sol Republic conducted a survey about the product and discovered that 53% of Millennials (34 years of age or younger at the time of the survey) owned at least 3 pairs of headphones. These headphones are worn for at least 4 hours per day, with 73% of users admitting that they put them on to avoid needing to interact with others.

#1. Revenues within the headphones sector in the United States generated revenues of $3.94 billion in 2018. The industry saw growth of 1.3% when compared to the year before. (Statista) 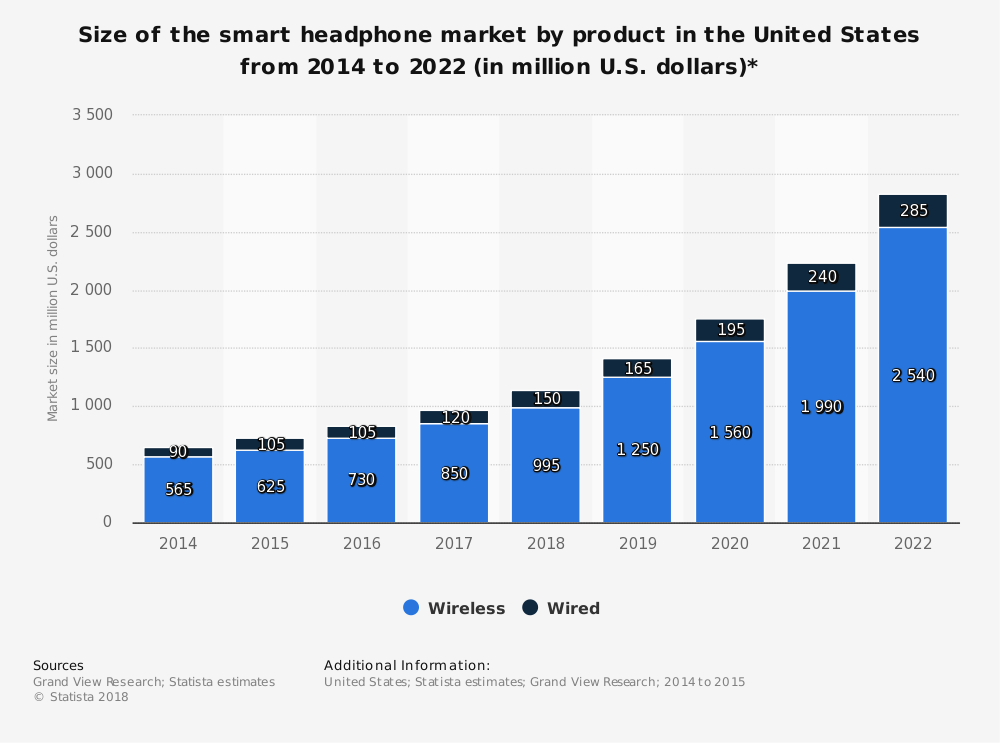 #3. Headphones surpassed $13 billion in revenues for the first time in 2016, with over 336 million units sold. Volume sales have been rising at an average of 12 million per year. (EPSNews)

#4. Headphones purchased for personal use represent about 40% of the overall market. The corporate segment represents $3.5 billion in total revenues, with the call center industry being the strongest purchaser of products. (EPSNews)

#5. Multi-brand stores account for over 30% of the units that are sold by the headphone industry each year. (EPSNews)

#6. Although the United States is the leader in revenues generated for the headphone industry, the Asia-Pacific region leads in total units sold. In 2014, there were over 185 million headphones and earbuds sold, representing 41% of the total global volume for the market. (EPSNews)

#7. 60% of the sales which come from the Asia-Pacific region for the industry occur in China. (EPSNews)

#9. In 2016, when headphones and earbuds saw a 7% increase in the number of annual shipment, there was a 19% increase in the retail value for the average pair that was purchased. (The Verge)

#10. Wireless sets are becoming more common in the headphone industry, responsible for 14% of the overall market according to 2016 data. (The Verge) 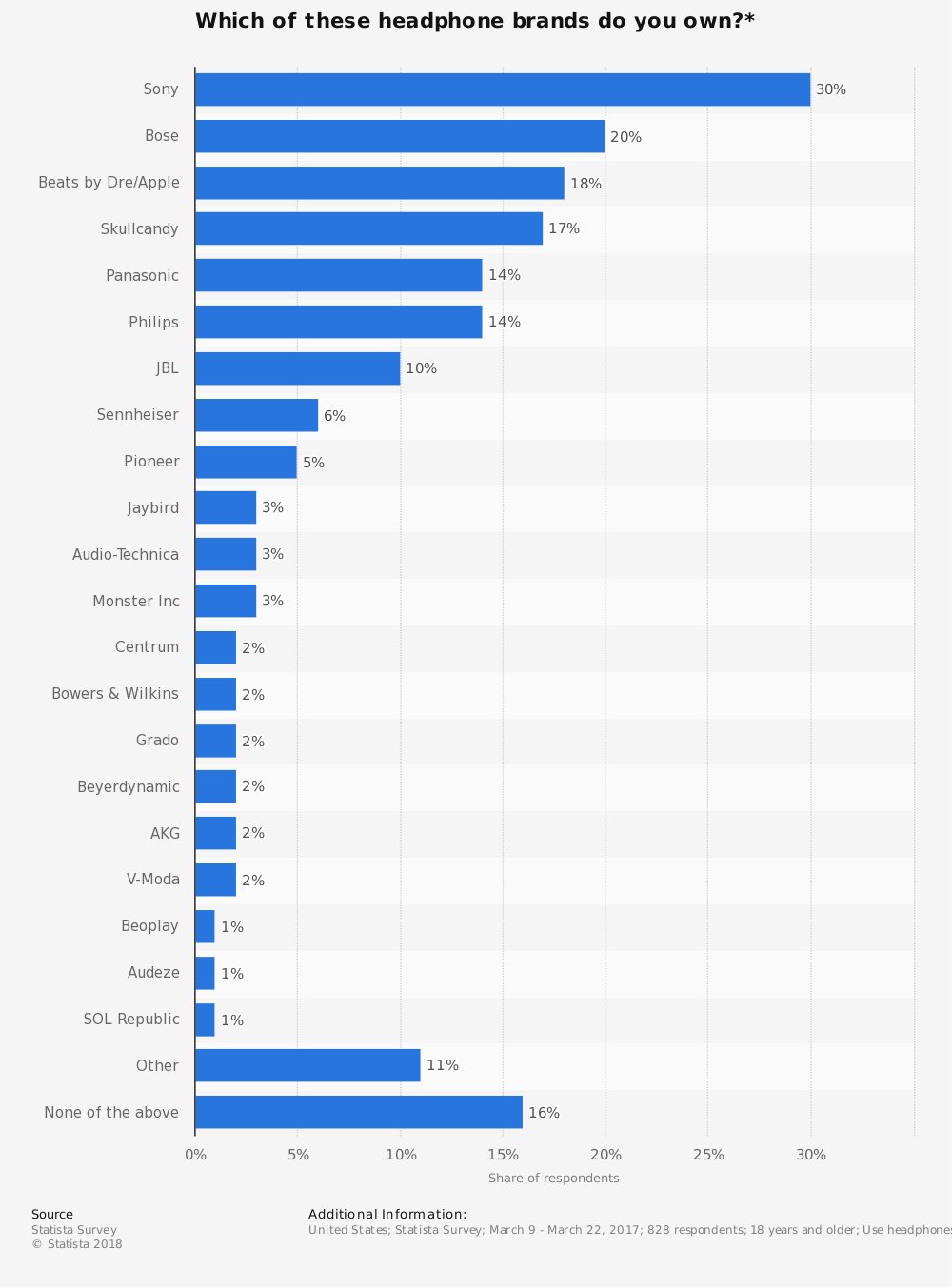 #12. Sony is the world’s largest provider of headphones, taking a 17% share of the overall global market. Apple, when combined with its sub-brand of Beats, carries an 11% share of the worldwide headphone market. Although these two companies control a 29% market share, they take 47% of the revenues that are generated by the industry. (The Verge)

#13. Beats and Bose are responsible for 40% of the premium headphones market, even though both brands have recently cut prices to stay competitive with disruptors in their industry. (The Verge)

#15. Since 2016, the market penetration rate for the headphone industry has improved by 20%. (The Diffusion Group)

#17. Even though earbuds are a standard item that comes with many electronic devices today, about 50% of headset users report that they never use them. 22% of consumers say that they only use earbuds and don’t use the traditional headphones. (The Diffusion Group)

#18. For Beats users, 44% of consumers say that they purchased their headphones in the past year. That’s compared to the 29% of Bose users who made the same purchase. (The Diffusion Group)

#19. 57% of women who listen to the radio at work say that they use headphones. That’s higher than the 56% of women who call themselves “heavy” radio listeners. (Insider Radio)

#20. 40% of people wear headphones or earbuds for 50% or more of their overall listening activities today. For radio listeners, that means up to 8% of the audio ends up being missing because it isn’t transmitted through the headphones. (Insider Radio)

#21. Even with increased headphone use, hearing loss rates are down in the United States. 16% of Americans between the ages of 40-70 experienced hearing loss from 1999-2004. In 2011-2012, just 14% of Americans in the same age demographic reported a similar experience. (Forbes)

#22. 71% of iPhone users said that they thought it was a bad idea for Apple to take the headphone jack away from their device. 73% of Android users said they were less likely to switch to an iPhone because of the lack of a headphone jack. (Yahoo Finance)

#23. Over 60% of iPhone 7 users= say that not having a headphone jack has been a problem for them, with issues ranging from not being able to listen to music to battery drain issues with constant Bluetooth use. (Yahoo Finance)

Portable music is approaching 50 years of being a thriving industry. We have evolved from the Walkman and its small, foam headphones to numerous designs that make a fashion statement for people just as they offer them a chance to listen to music.

Early critics of headphone technologies said that wearing them made people seem almost “Orwellian.” Although many people do use headphones as a way to tune other people out, this technology gives us an opportunity to make new friends too. It can be just as fun to listen to what others have on their headphones or earbuds as it is to listen to your personal music.

As more devices make it possible to listen to music or sounds, take phone calls, and even connect to gaming systems, the headphone industry stands poised to continue pushing revenues higher. Headphones are also becoming more expensive because people want sophisticated features with them.