A bioprocess is defined as a specific process which utilizes living cells, or their components, to create a desired product. It is either the application or alteration of biologically-derived materials to use as a product or feed stock. Several different industries, including fuels, cosmetics, feed, and fuel, utilize the technologies, products, and processes which are created by the bioprocess industry.

A majority of the bioprocess industry is focused on healthcare applications. Industrial uses include vaccine production, biopharmaceuticals, and tissue engineering.

#1. The United States is the largest market for the biopharmaceutical segment of the bioprocess industry. It is currently responsible for more than 30% of the global market. (Select USA)

#2. More than 50% of the world’s research into biopharmaceuticals is conducted in the United States and U.S. firms hold more than half of the intellectual property rights on new medicines that are discovered. (Select USA) 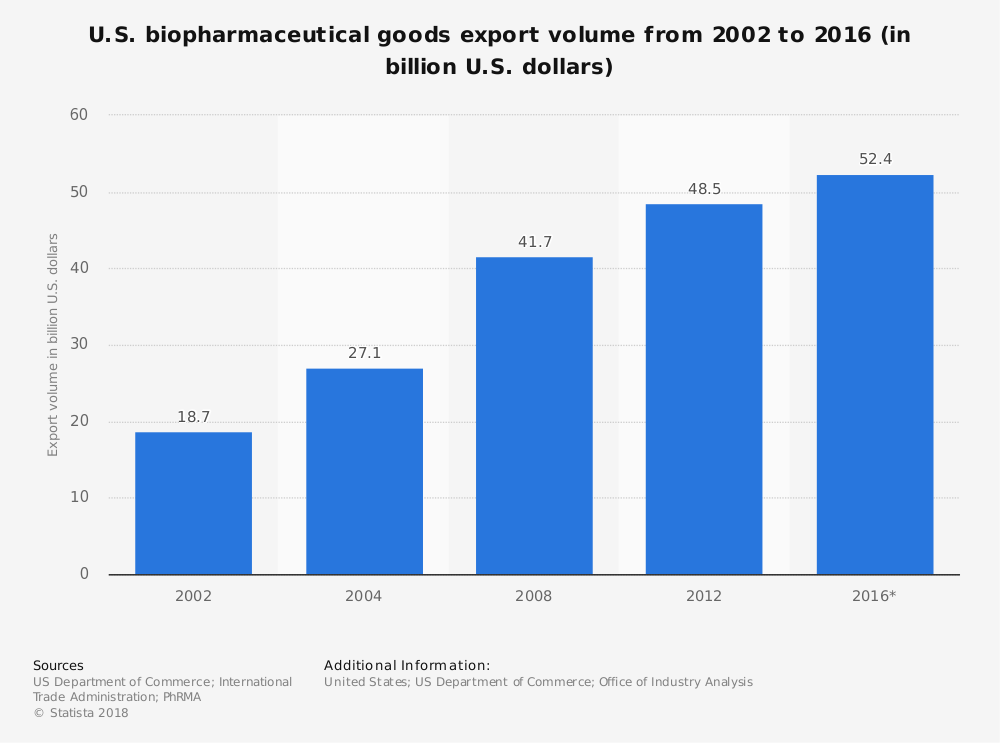 #3. The biopharmaceutical sector in the United States accounts for 17% of all domestic research and development that is conducted by domestic businesses. This results in an estimated economic output of $1.2 trillion, representing 3.8% of the GDP in the United States. (Select USA)

#4. More than 803,000 people receive direct employment opportunities in the biopharmaceutical segment alone for the bioprocess industry. In total, the industry is responsible for more than 4.7 million jobs, with most of them requiring a doctorate-level education to be considered for employment. (Select USA)

#5. Biologics in the pharmaceutical sector are responsible for one-third of all new drugs that are currently in clinical trials or awaiting approval by the FDA. (Select USA)

#8. By 2025, the global market for vaccines could top $100 billion in revenues. (World Health Organization)

#9. The influenza vaccine market is expected to achieve revenues of $3.8 billion by the end of 2018. (World Health Organization)

#10. There are currently more than 120 new products in the development pipeline within the vaccine segment of the bioprocess industry. Over 50% of these products are considered to be of importance for the developing world. (World Health Organization) 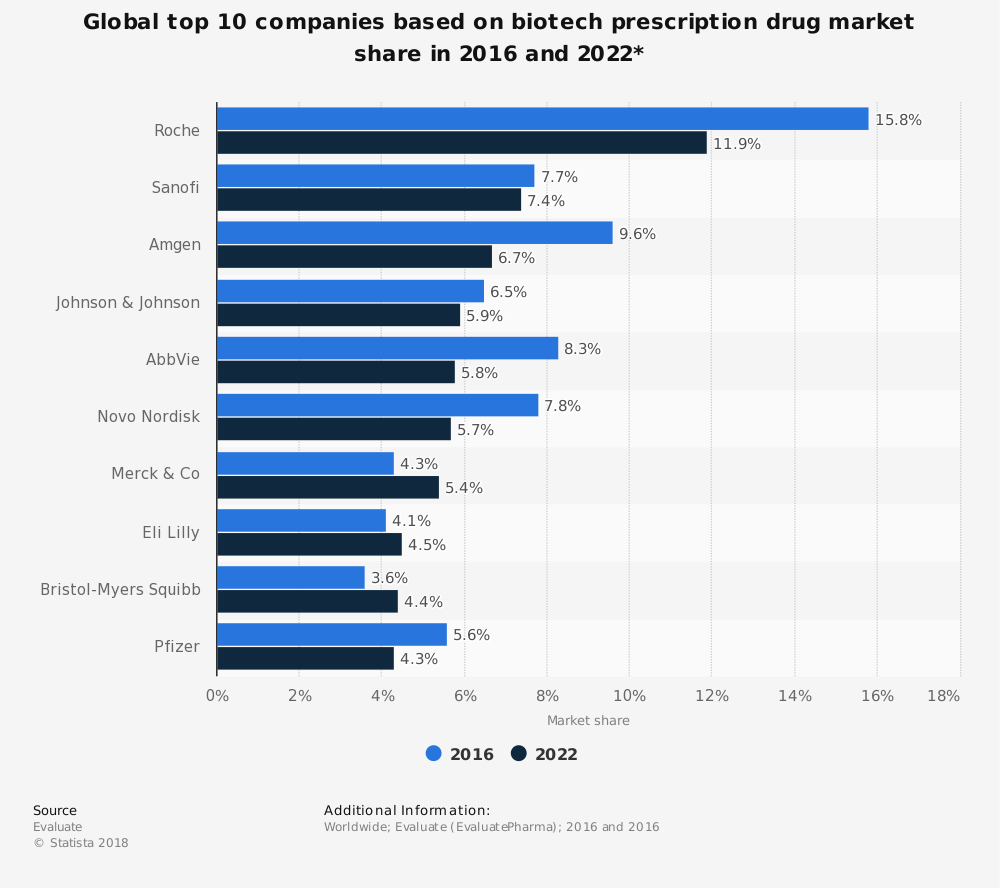 #11. GSK is the global leader in vaccine development, producing 23% of the available worldwide supply. Just 5 large multi-national corporations make up 80% of the current global market for vaccines. (World Health Organization)

#13. The developing world makes up 80% of the global population numbers, though it results in less than 20% of the actual global market for the bioprocess industry. (World Health Organization)

#14. China and India are expected to continue leading in the global bioprocess industry, responsible for up to 11% of the total capacity of the bioprocess industry. Combined, these two nations currently have a bioreactor volume of 1.8 million liters. (Bioprocess Online)

#15. Regulators have reported data quality issues with 80% of the trials that have come from approved products, which have resulted in tighter regulations that are strictly enforced within the industry. (Bioprocess Online)

#16. Worldwide, there are about 1 million people who are directly employed because of the bioprocess industry. (IBIS World)

#17. Biotechnology centers that are included with the bioprocess industry generated about $139 billion in total revenues in 2016. (Statista)

#18. The biotechnology segment of the bioprocess industry is currently growing at a rate of more than 5%. When combined with other segments of the industry, such as biopharmaceuticals, more than $500 billion in revenues are generated annually. (IBIS World)

#19. Although China is still producing stainless steel bioprocess technologies, the single-use, disposable sector has become the global standard. The opportunities within the single-use bioprocess industry are expected to grow at a CAGR of 34.38%. (Technavio)

#20. In South Korea, there are about 500 employees who are involved in bioinstruments and similar equipment that have a 4-year degree. (Statista) 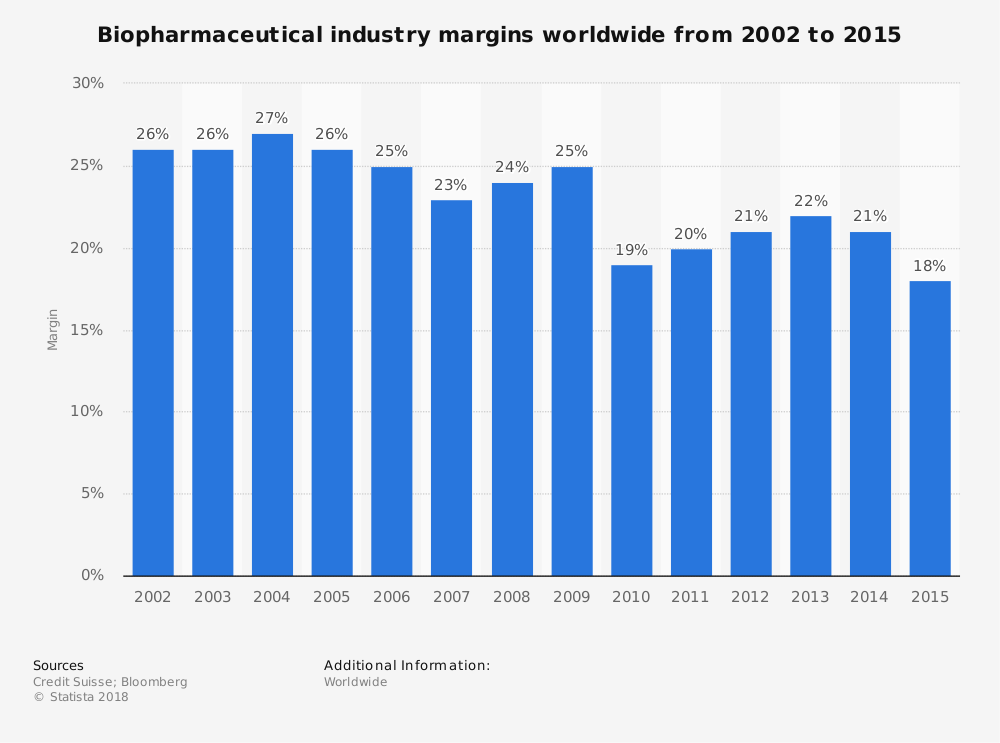 #21. If current growth levels for bioprocess engineer employment opportunities continues to grow at current levels, then over the next 10 years, the aggregate growth of this opportunity in the U.S. would be at 75%. At the same time, the projected growth of the bioprocess industry would be 1,000%. (National Institutes of Health)

#22. Out of 10,000 engineering seniors or graduate students that have had exposure to the bioprocess industry, fewer than 10% have pursued a graduate or doctorate in the field since 1977. (National Institutes of Health)

#23. The average bioprocess firm in the U.S. employs 98 people, of which 20% are involved in basic research tasks. Another 17% are involved in product development. (National Institutes of Health)

The bioprocess industry is still in its early stages of development. Although specific markets can be somewhat small, and the majority of markets are based in the developed world, it is the full potential of this industry that has investors looking toward the future.

Just 20% of the world’s population is currently served in an adequate way by the bioprocess industry. As costs come down and distribution networks improve, the people with the greatest needs will be served by the industry.

At the same time, research and development within this industry will continue to push specific segments forward. Biopharmaceuticals, especially in the U.S., which is the largest free-market pharmaceutical segment in the world, will drive profits upward for the industry. Because U.S. patents are valid for up to 20 years, investors can expect to see additional market approvals in the coming years.

As of 2016, there were only 4 biosimilars that had been approved for use in the United States. The annual sales for biopharmaceuticals globally may be as high as $200 billion. Growth rates are forecast to be greater than 15% in some markets. All of this means the bioprocess industry is on the verge of explosive, long-term growth.