Private security is an industry which has been around for several hundred years. Even in Ancient Egypt, ruling pharaohs would hire personal security guards to guarantee their protection. Romans had security guards protecting their emperors, as did the rulers of the Byzantine Empire.

In the United States, the rise of the security guard industry coincided with the events of the Great Depression. Guards were hired to protect factories and private businesses, a need which increased during World War II. By the era of the Cold War and its threats of foreign espionage, the security industry in the U.S. continued to add employment opportunities.

Security guards help to make people feel safe. With a constant threat of terrorism, both foreign and domestic, opportunities within this industry continued to increase.

#1. In 2017, the global security services industry, which includes security guards, had an approximate value of $116 billion. (Statista)

#2. The largest share of the global security services industry is located in Europe, which held a 26% market share in 2017. North America’s share of this industry was 24%. (Statista) 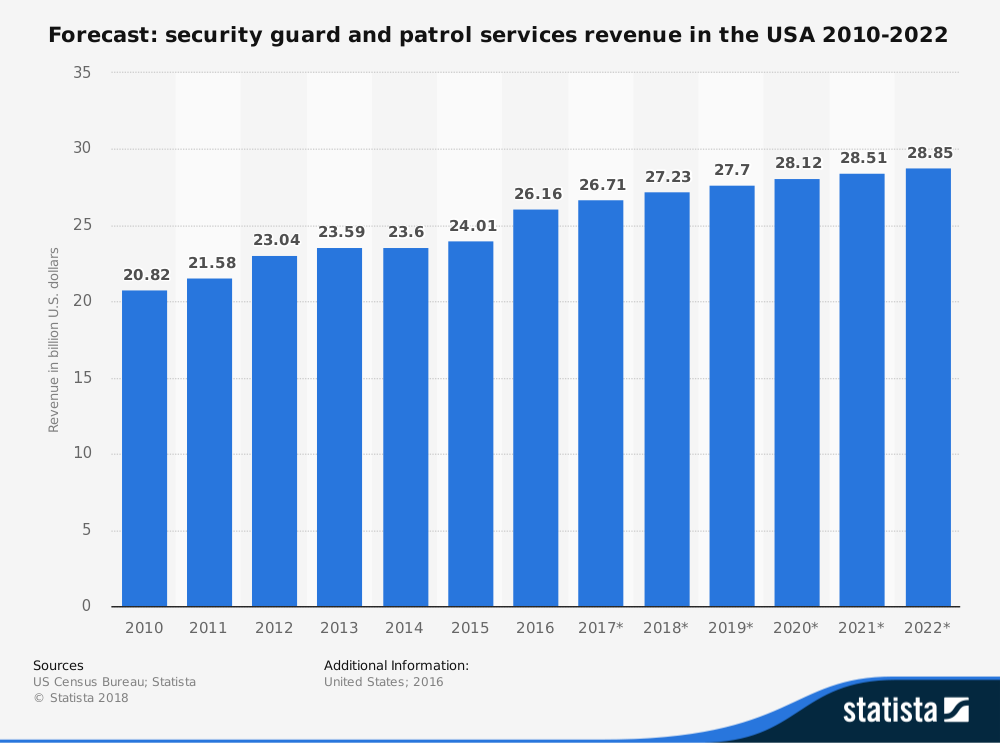 #3. California is the leading state for the employment of security guards in the U.S., with over 151,000 currently employed according to 2017 figures. (Statista)

#4. Employment of security guards in the United States is expected to grow by 5% through 2024, with up to 1.15 million security guards employed. (Bureau of Labor Statistics)

#5. U.S. spending on security guard services is expected to reach $68 billion by 2019, which would be a 5% increase over 2018 figures released by the industry. (Freedonia Group)

#7. 73% of the security guards employed by the industry in the U.S. are involved in investigation and security services. More than 667,000 security guards are employed in the segment, at an average annual wage of $28,960. (Bureau of Labor Statistics)

#8. There are currently 30,000 security guards employed at elementary or secondary schools in the United States. These guards have an average annual salary of $34,920. (Bureau of Labor Statistics)

#11. Alaska pays the highest state-based annual wage for security guards in the U.S. with an annual mean wage of $46,770. (Bureau of Labor Statistics)

#12. It typically costs between $12-$20 per hour to hire an unarmed security guard in the United States. If an armed guard is required, the average cost is between $18-$25 per hour. (Valuation Resources)

#13. Private security guards outnumber police officers in most of the countries around the world today. An estimated 20 million private security workers are employed globally. (Forbes)

#15. There are between 10,000 to 14,000 individual contract security companies currently operating in the United States. Out of these companies, about 6,000 of them employ more than 100 people. (Robert H. Perry Associates Inc.)

#16. The 5 largest companies within the security guard industry based in the U.S. control over 50% of the current market. These companies together generate annual revenues for the industry of more than $11 billion. (Robert H. Perry Associates Inc.)

#17. Two of the largest companies providing security guards in the United States are foreign-based and responsible for $6.6 billion in revenues. (Robert H. Perry Associates Inc.)

#18. In Canada, the security services industry provides revenues of $4 billion annually. From 2012-2017, the industry experienced an annual growth rate of 0.7%. (IBIS World)

#20. One of the reasons for high employment rates of security guards in India is high lefts of burglary and theft. In 2013, there were over 354,000 reports of theft and 101,00 reports of burglaries in the country. Another 31,000 reports of robbery were also made. (Ministry of Home Affairs)

#21. In the past 6 years, the security industry in India has doubled, rising from Rs 400 billion to Rs 800 billion, providing a lucrative employment options for unskilled workers who would normally struggle to find meaningful employment. (Money Control)

The primary challenge to the security guard industry today is automation and remote monitoring. As technology is able to proactively monitor property and people in more places and with additional reliability, the role of a security guard continues to be reduced. That has created a need within the industry to hire highly-qualified guards and administrative staff who know how to implement these technologies effectively.

Although there are growth opportunities available in this industry, the increased demand is for guards who know how to implement modern high-tech dashboards, use CCTV resources to their benefit, and are highly trained in high-stress, potentially dangerous, encounters with individuals who may intend to do harm.