The shipbuilding industry in Australia has a long and colorful history. The docking and repair of vessels pre-dates the federation, with the Williamstown dockyard established in the 1850s to support military vessels. The first dry dock in Australia was opened in 1855 in Balmain. Just a year later, Garden Island in Sydney Harbor was reserved to be a military base and site for ship repairs.

As the industry moved from repair to actual building, the first years were quite lean. Williamstown at one point, in the early 20th century, received only 3 new vessel orders in 10 years. It wouldn’t be until the 1960s, in the post-war era, that the industry would really begin to take off.

Yet even then, challenges plagued the industry. The Australian Navy had loose controls on ship design requirements and would eventually cancel hundreds of millions of dollars in orders. By the 1980s, necessary controls and equipment upgrades were in place, creating an industry that has proven to be one of the continent’s strongest and most significant industries.

#1. The shipbuilding industry in Australia currently generates $1.7 billion in value for the local economy. It also exports about $575 million in completed projects each year. (Department of Industry, Innovation, and Science)

#2. About 15,000 people are employed by the Australian shipbuilding industry each year. About 2,000 registered businesses are currently operating in this industry right now. (Department of Industry, Innovation, and Science) 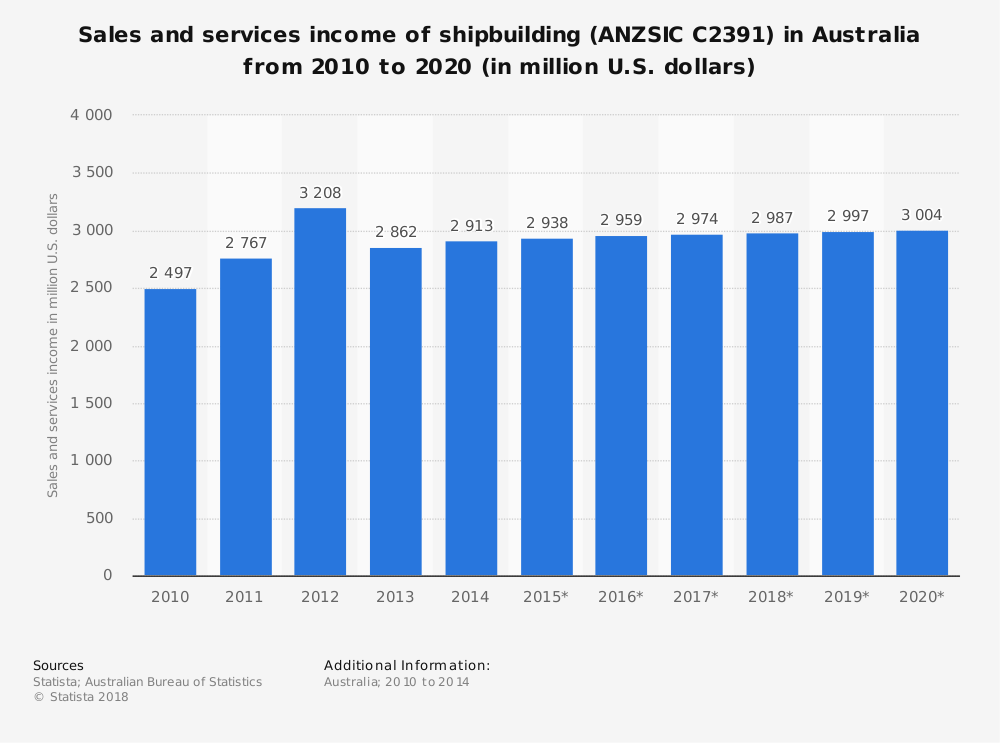 #3. The average employer in the shipbuilding industry has 19 people on staff. In total, the businesses contribute about $120 million per year into new research and development. (Department of Industry, Innovation, and Science)

#4. The majority of businesses within the industry turnover between $50,000 to $2 million in annual income each year. Just 162 businesses registered an annual income that was greater than $200 million. (Department of Industry, Innovation, and Science)

#5. In 2008, the number of boat-related apprenticeships or training opportunities peaked at 1,100. In 2016, the total number of opportunities available was just 363. (Department of Industry, Innovation, and Science)

#6. When private, commercial and government ship and boat manufacturing sales are combined together, the industry generates another $4.2 billion in revenues, in addition to the $1.7 billion in value previously mentioned. (Department of Industry, Innovation, and Science)

#7. The shipbuilding industry has also diversified to work on other manufacturing processes beyond ships and boats. Just 56% of the industry specializes in ship and boat manufacturing. 16% of industry revenues come through technical services. Another 14% is earned through transport parts and equipment. (Department of Industry, Innovation, and Science)

#8. The MRO sector of the Australian shipbuilding industry is comprised of 470 firms that serve the commercial and defense markets. Revenues within this sector are expected to grow by 4.3%. If achieved, that would result in revenues of $3.8 billion and exports valued at over $250 million. (Minister for Trade, Tourism, and Investment)

#9. For the 5-year period ending in 2018, the estimated annual growth of the industry is 0.4% in the shipbuilding and repair services segment. (IBIS World)

#10. When included with the overall maritime industry in Australia, more than $12 billion in GDP is contributed to the economy. There is also another $400 million in taxation revenue that is generated. (PriceWaterhouseCooper)

#11. Australia currently has the fifth-largest shipping task in the world with is raw commodities, sea imports, and major oil and gas industries that are located off-shore. (PriceWaterhouseCooper)

#12. More than 85% of the population of Australia lives within 50km of the ocean. Over 70% of the territory of Australia is located beneath the ocean. When combined with all marine resource activities and industries, the shipbuilding industry is part of a dynamic $74 billion industry. (Australian Institute of Marine Science)

#13. The shipbuilding and repair industry in Western Australia generates more than half of the annual revenues seen by the industry. About $700 million comes through the region, with $550 million for shipbuilding. This employs over 5,000 people with direct and indirect opportunities. (Australian Marine Complex)

#14. A ferry built by the Australian shipbuilding industry currently holds the world distance record for a commercial passenger vessel. Over 1,000 nautical miles were covered in 24 hours. (Australian Marine Complex)

#16. 95% of the vessels which are built in Western Australia are destined for export markets. In total, the region has produced vessels with a value in excess of $4 billion over the past 10 years. (Australian Marine Complex)

#17. Shipbuilders in Western Australian supply about 20% of the global market for high-speed, lightweight ferries with vessels that range in length from 15 to 130 meters. (Australian Marine Complex)

#18. Profits within the Australia shipbuilding industry average about $300 million per year. (Minister for Trade, Tourism, and Investment)

#19. The Royal Australian Navy consists of about 50 commissioned vessels, supporting the work of nearly 16,000 personnel, with vessels built and/or supported by the local shipbuilding industry. (Australian Navy)

#20. Engines for the ships and boats manufactured in Australia are usually imported by the industry. France and the United States are the two primary providers of engine components, supplying over $30 million in engines in the last fiscal year. Germany and Sweden provide another $15 million in engines to support the industry as well. (Minister for Trade, Tourism, and Investment)

#21. New Zealand and the United States are the two primary customers of the shipbuilding industry. Total sales to these two nations were valued at AU$310 million in 2015-2016. (Minister for Trade, Tourism, and Investment)

#22. Another AU$110 million in exports heads to Canada, Singapore, and the United Arab Emirates annually for the industry as well. (Minister for Trade, Tourism, and Investment)

The Australian shipbuilding industry is particularly notable for its ability to produce multi-hull aluminum vessels that perform at high speeds, despite having large sizes. It also has a strong reputation for building steel vessels that incorporate modern, environmentally friendly designs.

At the same time, there are some unique challenges that this industry faces that others do not. One of the biggest issues the industry faces is its distance to market. The shipping costs of a completed vessel are much higher, especially outside of Asia, which means foreign purchases can be difficult to secure.

Free trade agreements have relieved some of this pressure, especially since tariffs on industry exports will be eliminated by January 2019. 8% tariffs on sailboats and other vessels with Korea are also being phased out.

The Future Frigates program is another promising option for the industry. Valued at $35 billion, it may offer producers within the industry an opportunity to step into the defense sector for the first time.