Single payer health care is a healthcare system that has everyone pay into a centralized fund. Every medical bill is then paid from this single fun. Contributors are often separated into different “pools” in such a system, based on how much, if any, they are able to pay into the fund.

Once established, anyone can go visit any doctor they choose whenever they have a healthcare needs which needs to be addressed. There is no waiting for insurance approval or other pre-visit steps that are required in other healthcare systems. If you feel sick, you go to the doctor. Then the centralized fund pays for your qualifying visit.

This type of healthcare is sometimes referred to as “socialized” medicine. It is different from a free-market system of healthcare in that it requires patients to follow specific steps to receive specialist care, but it also costs much less.

Here are the top pros and cons of single payer health care to think about and discuss.

List of the Pros of Single Payer Health Care

1. Costs are naturally reduced within the structure of a single payer health care system.

One of the biggest advantages of a single payer system is that it reduces administrative requirements. The cost savings in administration alone are close to 30%. It is true that in a centralized system, a person’s taxes would increase to pay for healthcare needs. At the same time, however, their payment responsibilities to insurers would decrease, if not disappear. For many households, there would be a net savings when a single payer system is established to replace a free market system.

A larger healthcare system is better able to leverage their size to reduce treatment and prescription costs for patients as well. It is the same concept that large corporations use as a pricing strategy against smaller businesses. The reason why Walmart can purchase and sell items for a cheaper price compared to the family business downtown is that they use their size to buy in bulk. Bulk purchases are typically cheaper, which means the company can make more money per unit sold while also allowing customers to pay less for the item.

Prescription drug cost comparisons are an excellent example of this. In the United States, an EpiPen epinephrine auto-injector can cost as much as $600. That includes any coverage that insurance may be able to provide. The exact same medication in Canada costs just $200.

No one is forced to worry about whether or not they have health insurance in a single payer system. Everyone is automatically covered by the system. That means anyone can go visit their doctor when they are feeling ill. If they get injured, they can go to the emergency room without worrying about their future finances. You can be rich. You could be poor. None of it matters. That is because within the structure of a single payer system, healthcare is considered more of a “right” than a “privilege.”

4. All providers are offered the same rate of payment in this system.

Doctors at Swedish Hospital in Seattle, WA may charge over $700 per hour for their services, depending upon their specialty. Even with healthcare negotiations from insurers in place, the costs may be higher than $400 per hour. That means a 15-minute visit with a doctor could cost $100 and that would be the responsibility of the patient to cover initially, even if they are covered by health insurance.

Under a single payer system, there are no surprise rates. Every provider is paid a rate that is based on their geographic location, specialty, and the services provided. There are no sliding scales or medical debt to worry about. That is why this system allows patients to expect a certain type of care and providers can expect a certain level of compensation.

5. It does not eliminate the private healthcare market.

Just because a single payer health care system is in place does not mean that private care just disappears. Even countries with single payer systems in place have private providers which are authorized to provide medical care. These providers can even accept certain types of health insurance, if that is what a person or household believes is in their best interests. Although these private providers set their own rates, they also supplement the standardized industry and can provide second opinions or other forms of treatment that may be necessary.

6. Numerous compensation opportunities can be structured into the system.

One of the biggest concerns that providers have with a single payer system is a drop of incoming revenues. That means some doctors, nurses, and administrative staff might be forced into declining pay scenarios. To eliminate this concern, a single payer system is often structured with several different types of bonuses. When providers meet the goals of certain programs, then they receive bonus compensation from the centralized fund. Even in rural areas, such a system would make it possible for good doctors to become available to treat patients when they need care.

7. It improves the long-term care that patients receive.

8. Single payer systems shift healthcare spending to where it is needed the most.

9. It would allow people to receive a similar level of care.

Many see the ability of having health insurance as a benefit when compared to having no insurance at all. That is not always true.

Preventative care is one of the necessary foundations to stopping costly chronic diseases. If heart disease or diabetes risks can be countered in patients before the conditions become problematic, then a tremendous savings in the healthcare market can be achieved. When people have the freedom to visit the doctor without worrying about what they’ll have left for groceries at the end of the month, they are more likely to take advantage of preventative care options.

Emergency rooms are one way that this is already done in the United States, regardless of a person’s insurance status. Visiting an ER is also one of the most costly forms of care available, which would be reduced under a single-paye system as well. 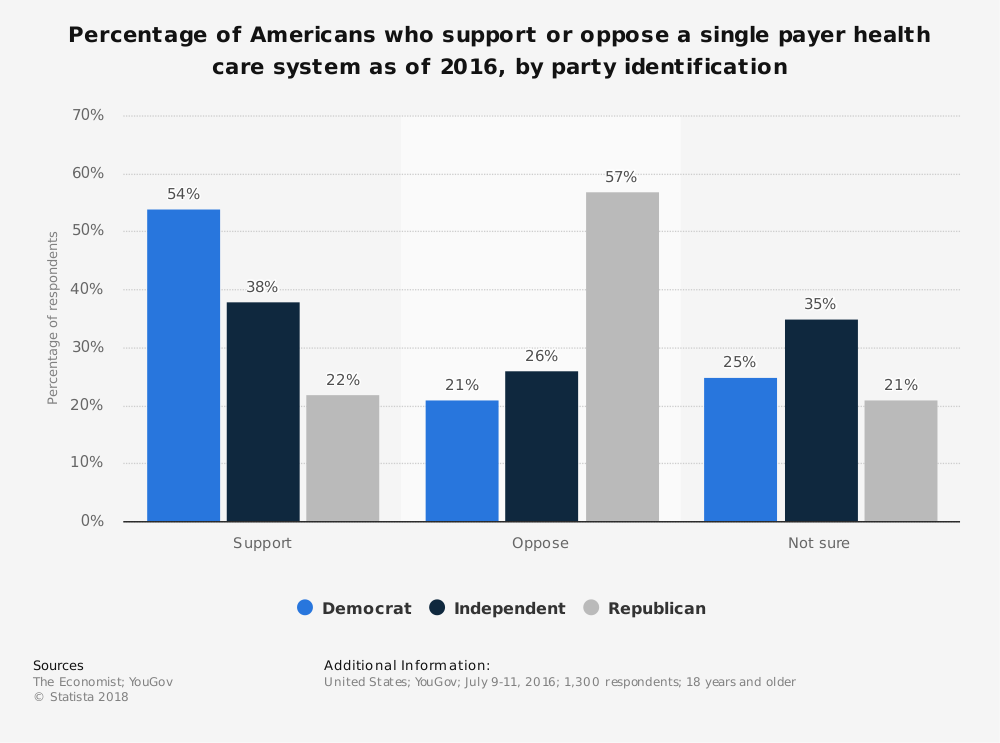 List of the Cons of Single Payer Health Care

1. Some providers may choose to opt-out of the single payer system.

Asking a doctor to take a pay cut from $700 per hour may not go over so well with some providers. That payment rate does more than compensate the doctor, after all. It helps to fund the front desk staff, the nursing staff, the utility bills, and many other costs. If the compensation rate is cut, a medical provider may not be able to meet their financial obligations.

2. It creates problems with doctor shortages.

In the United States, there is an expected shortage of available doctors that may reach 100,000 providers by the year 2025. There are graduation gaps for doctors in the United States each year that are between 5,000-10,000 positions. By improving access to healthcare, more people will visit their medical providers. That means there will be a need for even more doctors. Without providing an incentive, or certain advantages, to earning a degree in the field of medicine, there are going to be lack-of-access issues with which to contend.

That is already seen in the Canadian healthcare system. Waiting times for health care when a medically necessary treatment has been authorized averages 21.2 weeks in the country. In 1993, the average wait time was just 9.3 weeks. Certain diagnoses, such as a GP referral and orthopedic surgery, have wait times that are longer than 40 weeks.

3. Single payer centralized funds must come from someone.

Taxation is the primary funding resource for a single payer healthcare system. It is true that many households would experience a net savings when transitioning to such a system. Not every household would. In the United States, the average cost of health insurance premiums in 2016 was $833 per month, with an average deductible for a family of about $8,000. That means for a household earning $100,000, about 16% of their income goes to healthcare costs.

Now if their tax rate rose to 25% to cover the costs of a single payer system, through direct taxation, increased sales taxes, increased fuel taxes, and other common forms of money generation, their overall cost would be about the same, if not a little more, depending upon state and local taxes.

4. This type of system can reduce the need to innovate.

Innovation is what keeps costs down within a free market system. In a single payer system, it is mass service provision that keeps pricing down. Innovation also improves the care that a patient can receive. Although single payer systems do create consistency, that may not be helpful for our future healthcare needs. A lack of innovation often leads to a lack of care quality, forcing people toward providers that offer a private-pay option.

That type of system creates a new form of “haves” and “have nots.” Those with enough money can go to the doctor whenever they want. Those without monetary resources are forced into the single payer system and will receive whatever level of care is provided there.

5. The costs of health insurance may not actually disappear.

This is one of the biggest threatens that is associated with the single payer system, especially when transitioning to one from a free market system. To access the private market, there would likely need to be a system of health insurance in place to cover those costs. That means a household may need to pay increased taxes to contribute to a centralized fund, while also maintaining their monthly premium costs for their health insurance coverage.

Should this type of negative scenario happen, a family’s healthcare costs could potentially double from what they are now. Based on current averages, that means up to $32,000 in medical costs could come out of a family’s annual income. What could the average family do with that money if they didn’t need to pay it to medical providers?

6. Increases in per capita spending rise in single payer systems too.

Since the 1990s, the per capita spending on healthcare costs in Canada has risen at comparatively similar rates to what has happened in the United States. Since the 1970s, the per capita costs of a family in both countries have nearly tripled. Although the U.S. leads the world in healthcare spending, it is a pay-as-you-go type of system. That means patients can avoid long wait times for specialist care, fund their own procedures if needed, and eliminate the issues of waiting. If you don’t like your doctor, then you can go pay a different doctor to examine you. 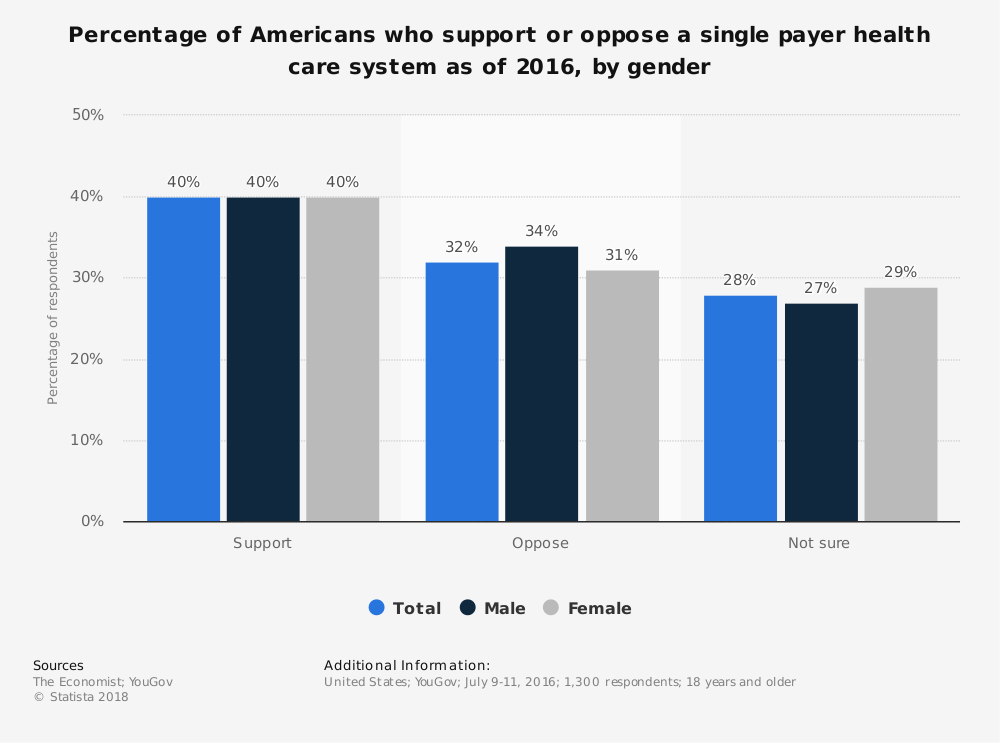 I recommend that you read these 43 healthcare industry statistics and trends that support some of these pros and cons.

That is not always available in single payer systems. You’d be forced into the private-pay sector, which may not even exist. Your only other option would then be medical tourism, which has its own set of pros and cons that must be evaluated.

The pros and cons of a single payer health care system are complex, unpredictable, and will generate winners and losers. The winners will feel that expanded access to care, lower pricing, and the potential for better services will outweigh any negatives that would occur. The potential losers would find themselves paying more for their healthcare, subsidizing the care of others, and potentially having fewer choices in how their needs are met. That is why this debate often focuses on individual perspectives.