For the 2017-2018 agricultural season, the Australia beef industry was able to produce $11.4 billion in total production, including live cattle exports that occurred. Out of the $60.5 billion in total farm value that was generated in Australia, beef producers were responsible for 19% of the total value.

More than 1.1 million tons of beef and veal were exported in the past agricultural season to 78 different international markets. That accounted for 71% of the total production that the Australian beef industry was able to achieve for the year.

For lotfed cattle turn-off in Australia, Queensland is the clear leader for the industry, responsible for 58% of the overall market. NSW comes in second, providing a 27.5% share of the market. Victoria is a distant third, at just 6.3%.

#1. There are currently more than 43,000 farms in Australia that are working with beef cattle. When combined, they create a national herd population of more than 26 million head. (Australian Bureau of Statistics)

#2. About 50% of all agricultural activities that are produced through farms in Australia comes from the beef industry. (Meat and Livestock Australia) 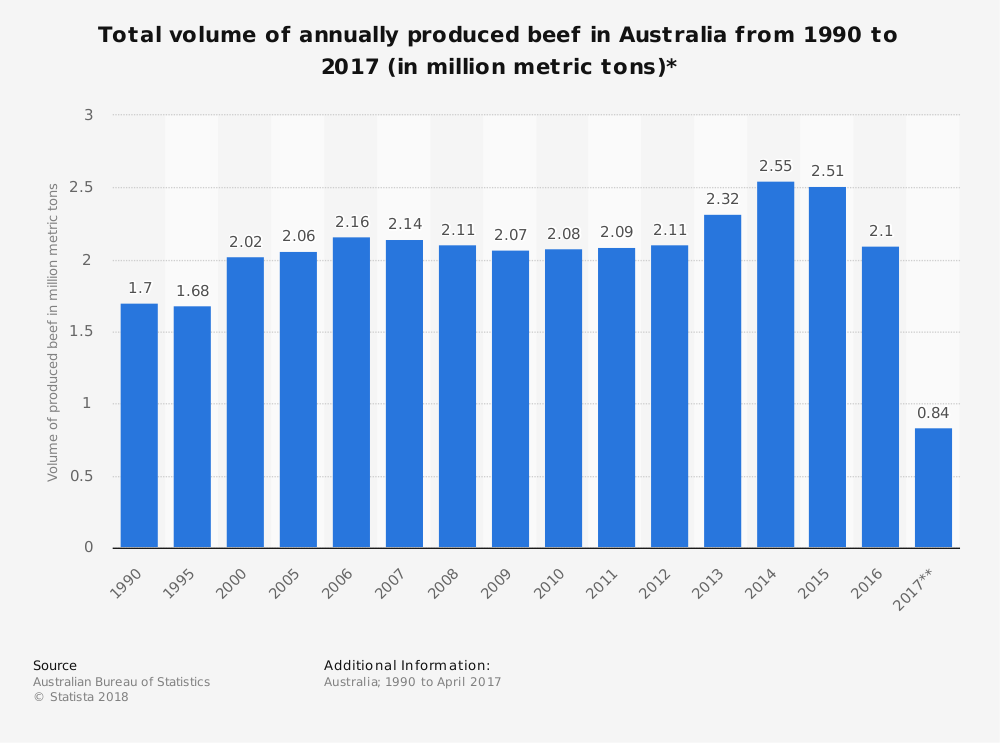 #3. Beef farmers in Australia produce an average of 2.1 million tons of veal and beef products for consumption each year. (ABARES)

#4. 17% of the farm exports which originate in Australia are due to the agricultural activities of beef farmers in the country. (Meat and Livestock Australia)

#5. The total value of beef calf and cattle production in Australia totals more than $7 billion each year. The average Australian will eat 33kg of beef products per year, a figure that is unchanged in two decades. (Australian Bureau of Statistics)

#6. Almost $7 billion is spent on veal and beef products domestically in Australia each year. After chicken, it is the most popular fresh meat product that is consumed in the country. (Meat and Livestock Australia)

#7. Australia exported over 937,000 tons of veal and beef products in 2011 which had a total value of $4.5 billion. Japan was the primary export market for Australia’s beef producers, accounting for 37% of the value. The United States came in second at 17%, followed by South Korea at 15%. (Meat and Livestock Australia)

#8. There are 12.2 million beef heifers and cows at the age of 1 year or older as part of the national herd, according to the last census count in June 2017. (Meat and Livestock Australia)

#9. For the 2017-2018 agricultural season, Australia’s beef industry was able to produce 2.24 million tons of carcass weight for veal and beef products. (Australian Bureau of Statistics)

#10. Over 2.8 million cattle who were grain-fed were marketing by the Australia beef industry, which represented 38% of the adult cattle that were slaughtered to produce fresh meat products for domestic and export demand. (Meat and Livestock Australia) 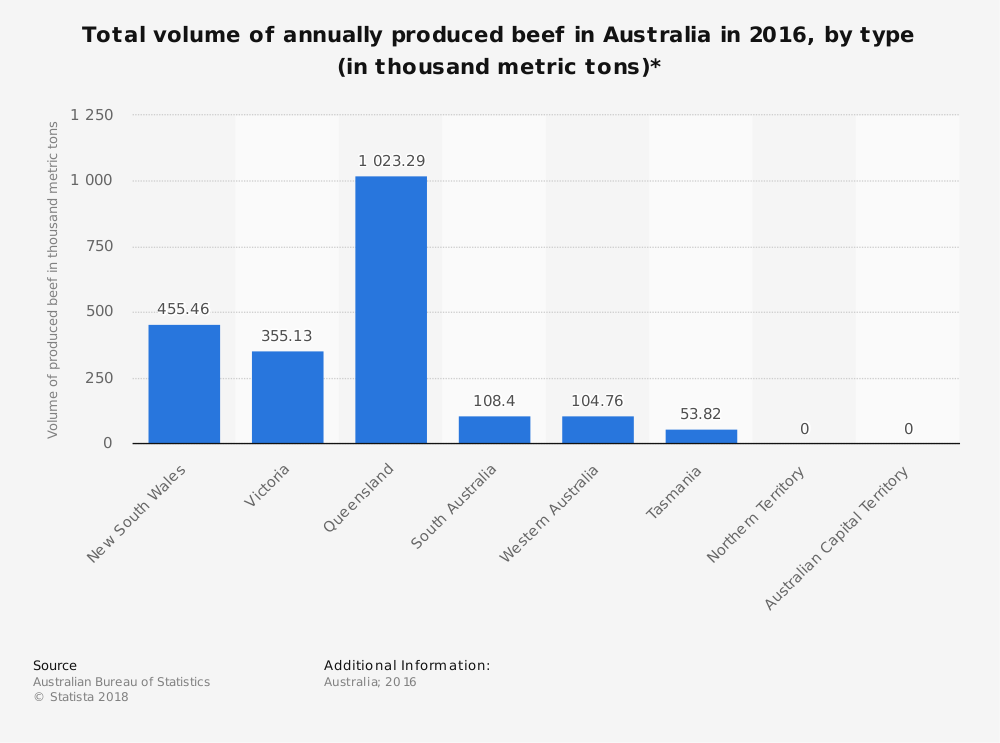 #11. Queensland produces the majority of beef products in Australia, responsible for 48% of the overall market. NSW is responsible for 22% of the industry, while Victoria provides another 17.8%. (Australian Bureau of Statistics)

#12. Australia accounts for around 2% of the total beef herd population in the world today. The industry is responsible for about 3% of the beef food products that reach the market in any given year. (Australian Bureau of Statistics)

#13. In 2017, Australia was the third-largest veal and beef exporter in the world, behind India and Brazil. (HIS Markit)

#14. 94% of the cattle that are exported from Australia are for either feeder, breeder, or slaughtering purposes. Just 6% of the live cattle exports, or 52,000 head, were designated as dairy cattle exports. (Australian Bureau of Statistics)

#15. 57% of the farms which are active in Australia are involved with beef cattle in some way, making it the most common agricultural activity in the country and continent. Farms running beef cattle manage 75% of the agricultural land. (ABARES)

#16. Farms with fewer than 100 head of cattle represent 2% of the national beef heard and 3% of the total value found in beef sales each year. (ABARES) 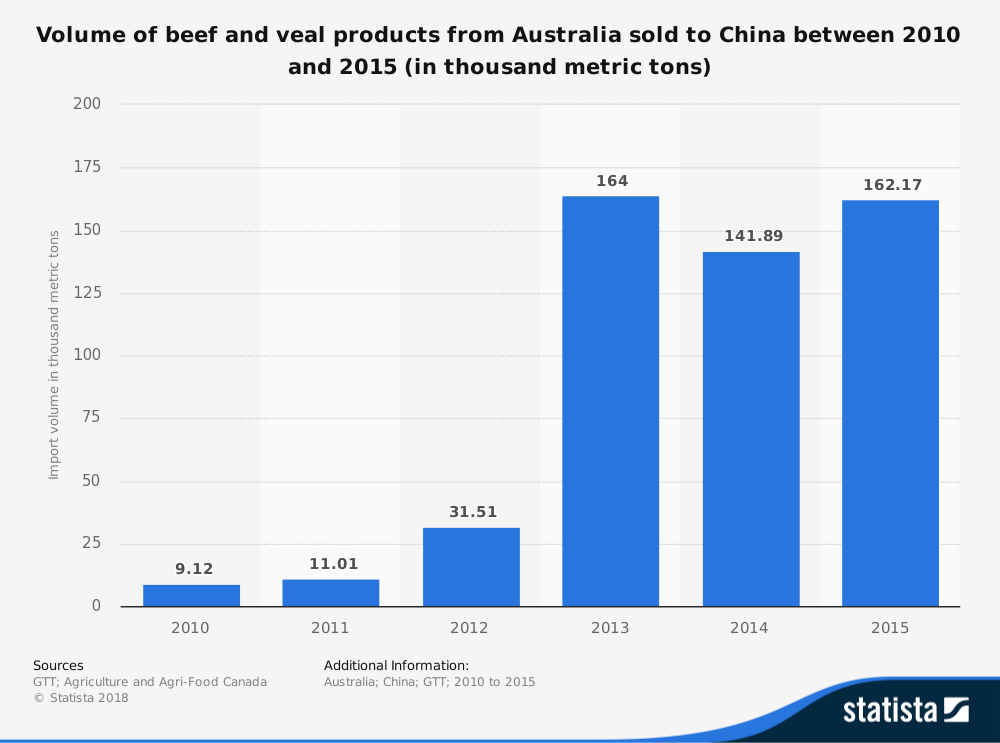 #21. The total value of capital for beef farms in Australia has risen by 61%, in real terms from the 2000-01 season to the 2016-17 season, even though the total number of beef farms has declined over that time period. (ABARES)

#22. 52% of the beef farms in the Australian beef industry made additions to their total capital over the past 10 years, according to 2016-17 data released. (ABARES)

The beef industry has always been a strong economic element of the agricultural sector in Australia. Despite its continuing strength, the world is a changing place and new challengers are trying to disrupt the market. In 2017, the Australian beef industry slipped from second to third in terms of total volume produced. At the same time, there was a 22% decline in the number of live cattle exported.

Revenues that are generated from beef activities, however, tell a different story. In the 2016-17 agricultural season, followed by the 2017-18 season, beef-producing farms in Australia had their highest cash incomes in more than 20 years, in real terms. The average price for head in the industry topped $1,200 for the first time ever while the average number of cattle sold stayed near the 20-year average of 250.