Although tennis is not one of the most popular sports in the U.S. or around the world, it still registers high participation rates. In 2017, there were 345,000 students in high school who were participating in an organized tennis program.

The wholesale revenues generated by the sale of tennis balls totals $81.2 million globally. That is despite the fact that just 7% of U.S. consumers say that they have a lot of interest in following professional tennis.

In total, the tennis economy is valued at $5.5 billion, even though interest in tennis has grown by 4% since 2012. That makes the sport a top-10 participant growth sport in the U.S., but it falls outside of that category in terms of sales. That means the tennis industry faces a unique challenge: getting their interested customers to a point where they want to spend money on equipment.

#2. There was a 16% in tennis players who were interested in the cardiovascular benefits of the sport. Youth tennis also saw a 7% surge of interest in 2016. (Tennis Industry Association) 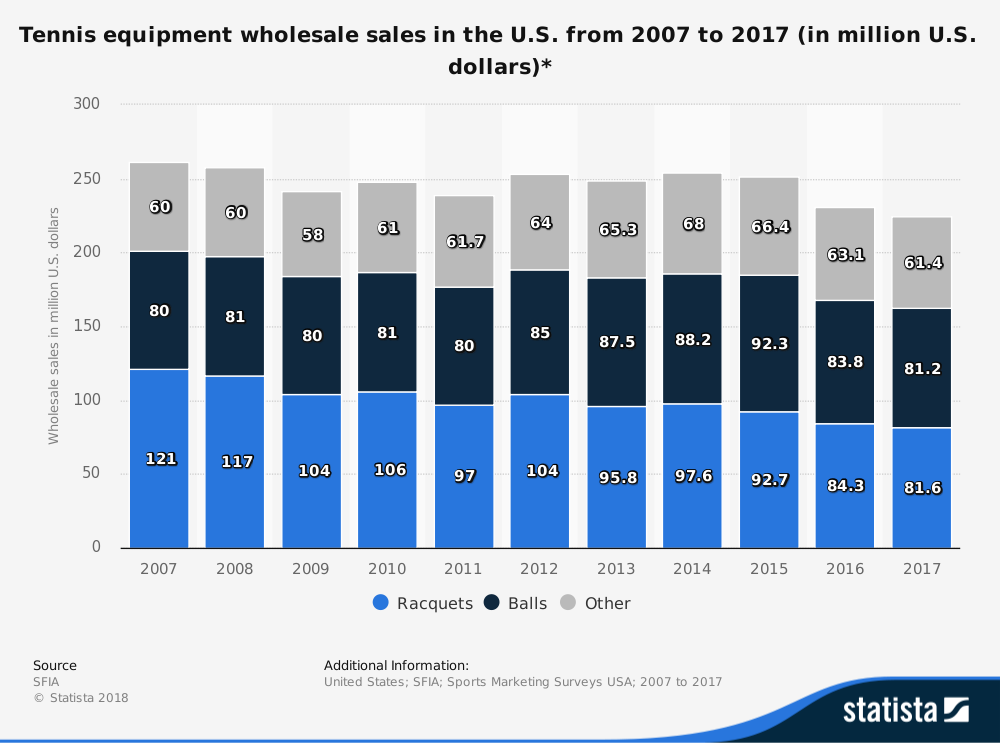 #4. Over 114 million tennis balls were manufactured and shipped by the industry in 2016, including alternative colors like orange and red. (Tennis Industry Association)

#6. About 9.8 million people are considered core tennis players, meaning that they find time to play at least 10 times per year. That trend has been heading downward since 2010. (Tennis Industry Association)

#7. Core tennis players are responsible for 81% of the money that is spent within the tennis industry. They are also responsible for 93% of the play occasions which occur globally. (Tennis Industry Association)

#8. 68% of the population which describes themselves as a tennis player is white/Caucasian. The only population group besides whites that are over-represented within the tennis community are Asians and Pacific Islanders in the U.S., who make up 12% of tennis players. (Tennis Industry Association)

#10. 30% of tennis players are college graduates. 38% of players live in a household which earns at least $100,000 per year. (Tennis Industry Association) 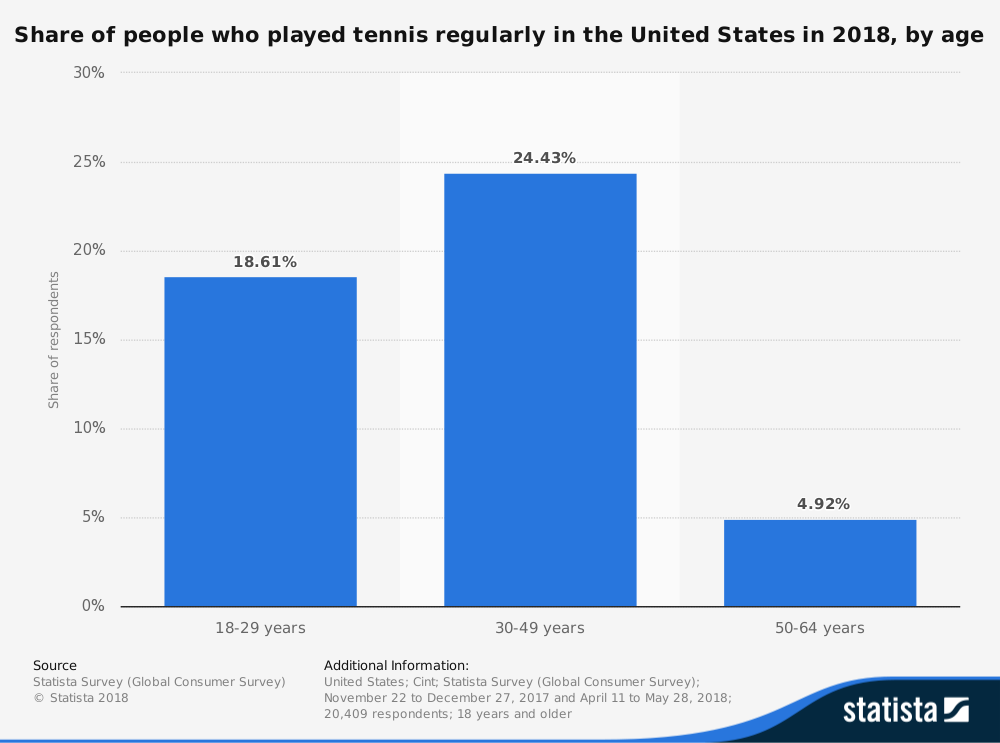 #11. The South Atlantic region of the United States is the most common place to play the game, responsible for 21% of opportunities. (Tennis Industry Association)

#12. 65% of consumers who begin to learn the game of tennis in a structured program decide to continue on with the game when they graduate from their training. (Tennis Industry Magazine)

#14. Since 2008, the sales of green, orange, and red balls is up 375%. To encourage more youth tennis, there have been 10,000 shorter courts either constructed or lined as well. (Tennis Industry Magazine)

#15. Although some equipment sales have been up, the sales of professional and specialty rackets have gone down by 5.6%. (Tennis Industry Magazine)

#16. League participation for tennis players was up 9%, thanks to group-focused activities, such as tournaments, being scheduled more often. (Tennis Industry Magazine)

#17. The number of players who are 10 years old or younger has doubled for competition tennis since 2012, with over 4.5 million balls being sold to players. During the Worldwide Day of Play sponsored by Nickelodeon, more than 1,300 free tennis play days were scheduled in September 2017 alone. (Tennis Industry Association)

#18. Having physical education classes in school makes one more likely to continue being active into the adult years. 37% of those who didn’t have PE classes at school say that they are inactive as an adult, compared to 22% who said they did have PE classes. (Physical Activity Council)

#19. 43% of people say that the best way to begin a new physical activity, such as tennis, is to have someone else to take part with the sport. 31% say it is easier when a friend can come along. 25% say that they’d be more involved if they were in better health. (Physical Activity Council)

#20. In a survey of multiple age groups regarding which sports or activities interested them the most, tennis did not make the top 10 in any demographic. In comparison, camping was listed as the top interest activity in 6 out of the 8 age demographics. Volleyball made the top 10 in the youth demographics. (Physical Activity Council)

#21. 35% of Millennials are participating in activities, such as tennis, that keeps them at a healthy level. Another 11.3% are active and participated in high caloric activities. Only Generation X members were active at similar levels. (Physical Activity Council)

The tennis industry has taken the first steps forward on a journey that will likely be long and difficult. More players, including youth players, are coming to the sport. The growth rates in the younger demographics, however, are not shifting the spectrum of the playing population. Customers are aging for this industry and they are spending less money.

Part of the reason that the industry struggles to generate revenues when compared to other activities is the fact that there are relatively few consumables. Tennis balls are the primary consumable that players must purchase. Shoes, clothing, and rackets are all long-term investments which even core players can use repetitively without needing a replacement over the course of a year.

If playing trends continue to move upward, the industry will keep seeing small surges in revenues from beginners. To create more strength, the industry must become more innovative with its lesson structures, manufacturing processes, and embrace of youth participation.

More small courts must be lined or constructed. Lessons which target youth and their parents must coincide with each other. This must become a family sport from a marketing perspective. Otherwise, it will continue to be a sport of interest because of its low barriers to entry, but it will not be a sport that generates revenue growth.