Although many households would prefer to eat fresh, organic foods, the primary staples found in homes in the developed world come from the packaged food industry. Numerous food products are part of this industry, from bread to spices to salads. Among the top packaged food companies there are General Mills Inc, Kellogg Co, Unilever Group, Nestle SA, and PepsiCo Inc.

Dairy, baked goods, and processed meat and seafood are among some of the fastest growing segments. Many consumers are searching for products that align with their standards for healthy living and want personalization and convenience. Here are some staggering packaged food industry statistics that will shock you.

#2. The global packaged food industry has a total market value of $2.47 trillion, according to figures released in 2016. By 2019, the global industry is expected to top $2.6 trillion for the first time. (Statista) 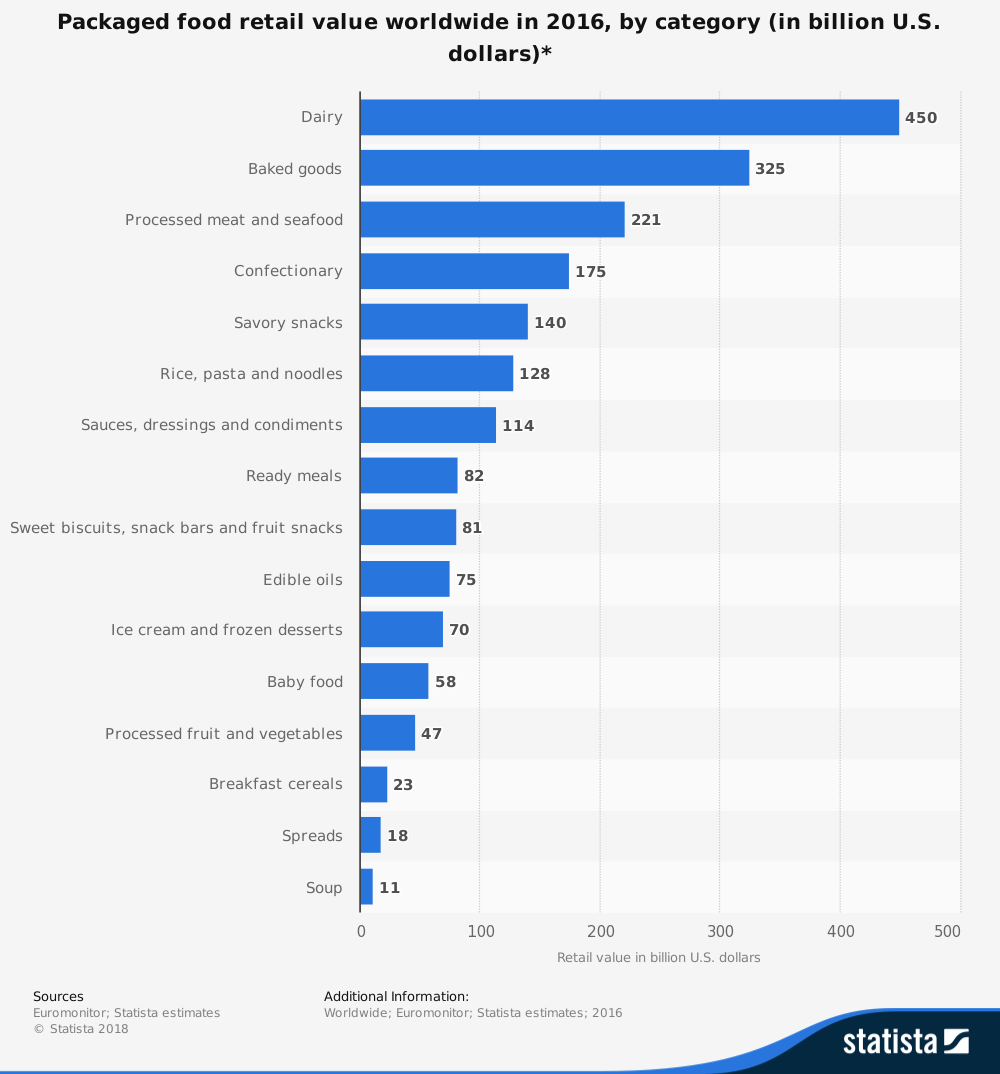 #3. Walmart is the global leader in terms of packaged food sales for the industry, with a sales forecast of $572.5 billion in place for 2019. (Statista)

#4. Portfolio is the largest driver of growth within the packaged food industry, responsible for 71% of the total growth achieved from 2008-2012. (Euromonitor)

#5. Companies which generate 80% of their sales from emerging-market countries were able to growth 3 times faster in the packaged food industry compared to companies with a geographically-dispersed base of customers. (McKinsey)

#6. For companies with high-growth categories that accounted for 75% or more of their sales, their portfolio momentum growth rates were 3 times higher than companies with diversification from 2008-2012. (McKinsey)

#7. In 2017, Kraft Heinz Company saw the highest levels of growth when compared to the other Top 10 world packaged food companies in actual sales. Their growth rate was 8.4%. They were followed by Danone at 7.6%, Lactalis at 7%, and PepsiCo at 5.4%. (Euromonitor)

#8. Only one company in the Top 10, General Mills Inc, did not see sales growth in 2017. Their sales fell by 1.6%. Kellogg Company also struggled, only posting a 0.1% sales increase for the year. (Euromonitor)

#9. 60% of the top global brands for packaged foods are based in China. 3 of the 5 top five food brands, Yili, Mengniu, and Arawana, are based there. (Euromonitor) 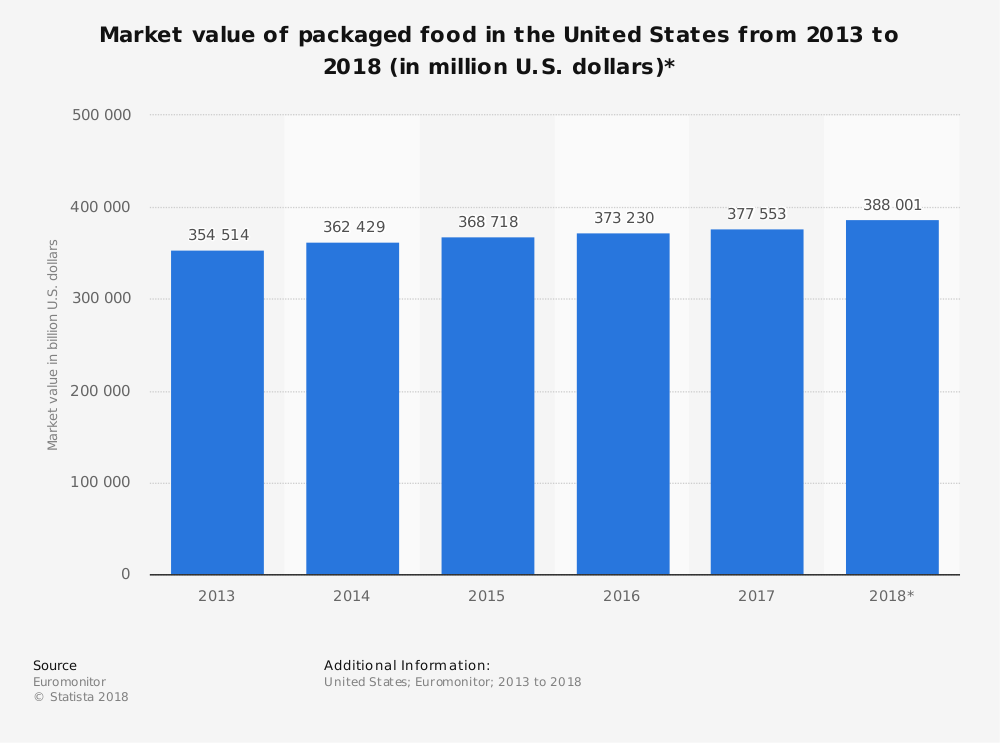 #11. 30% of consumers shop locally for their food items, with over 50% of them only purchasing products from brands or companies that they fully trust. (Euromonitor)

#13. Kraft Heinz led in total operating margin in 2016, achieving a 21.9% margin. Others have struggled to raise their operating margins, relying on cost-cutting measures instead. Nestle, for example, had an operating margin of just 14.7% over the same time period. (PwC)

#14. Small brands, defined as having annual sales of $1 billion or less, are outperforming large brands in 18 of the top 25 categories within the packaged food industry, according to 2016 figures. (Euromonitor)

#16. Since 2016, 17 CEOs of large food companies have stepped down from their positions, with some being removed from office by force. (Forbes)

#17. 70% of consumers in the United States and the United Kingdom say that their top priority for packaged foods is to understand the items which are printed on the ingredient list. (Forbes)

#19. About 10% of the world’s population is on some type of an exclusion diet because of sensitivities or allergies to a specific food. When preferences for excluding foods are included in those figures about 1 in 2 people are eliminating at least one specific food item from their diet. (Forbes)

#20. The United States currently ranks 21st out of 34 countries with regards to food sustainability. (Forbes) 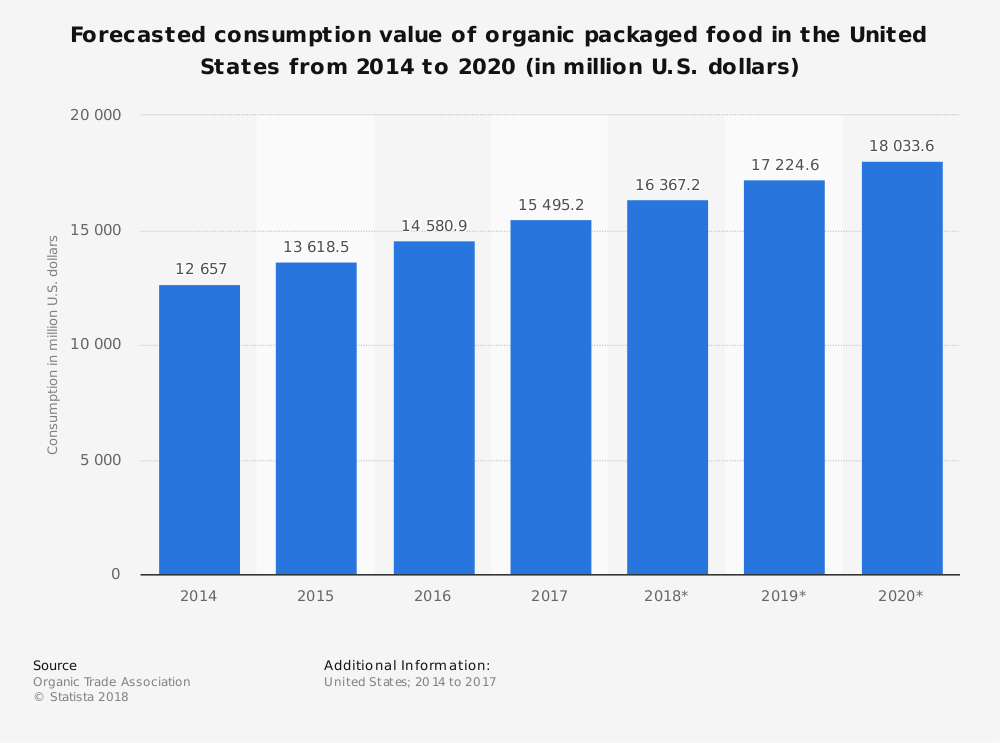 #21. From a marketing standpoint, only 27% of brands involved with the packaged food industry incorporated some form of storytelling as part of their campaigns. People trust word-of-mouth advertising three times more than they trust an advertisement. (Forbes)

There are a few emerging trends which are shaping the packaged food industry. Chocolate is being viewed more as a food product instead of a candy product. Cereal is being reimagined, reducing the number of highly sugared cereals in favor of items that will enhance nutrition. Different cereal products, including bars, candies, and other creative items, are looking to take cereal away from only breakfast as well.

The industry is also experiencing a push toward e-commerce platforms. Meals and snack bars are still relatively small as a sales segment when online purchases are considered, though it is a growing segment. With subscription boxes and grocery pickups available from online shopping, increased access may result in better revenues for consumers.

From a U.S. perspective, the biggest trend for packaged foods involves cheese. There is a push for healthier cheese products that are low-fat, low-sodium, and organic. Look for more on-the-go eating options, with new cuts, packs, and sizes being offered.

Growth for the packaged food industry will continue at a rate of about 3% overall, with the biggest gains seen in the growing Asia-Pacific region. In mature markets, the companies which promote new, innovative products will see the biggest successes.