Turning crude oil into complex, useful products is the goal of the oil refinery industry. To make this happen, the crude oil is purified, distilled, and then converted into the needed products within a refinery. These large complexes, zoned as industrial entities, are a combination of pipeline systems, tank farms, and flare systems.

The first oil refinery known to have been built was located in Ploesti, Romania. It became active in 1856.

Refined oil is a major part of modern life. Gasoline is used for transportation. Heating oil keeps homes warm. Petrochemicals use petroleum-based hydrocarbons for many of the supplies we use every day. Even the active substances in some of our medication is derived through the processes developed by the oil refinery industry.

#1. Petroleum refining in the United States is a $500 billion industry. It is also one that is shrinking. Since 2013, the average annualized rate of growth has been -10.5%. (IBIS World)

#2. There are about 250 firms currently active in the oil refinery industry right now in the United States. Combined, they provide about 67,000 direct employment opportunities. (IBIS World) 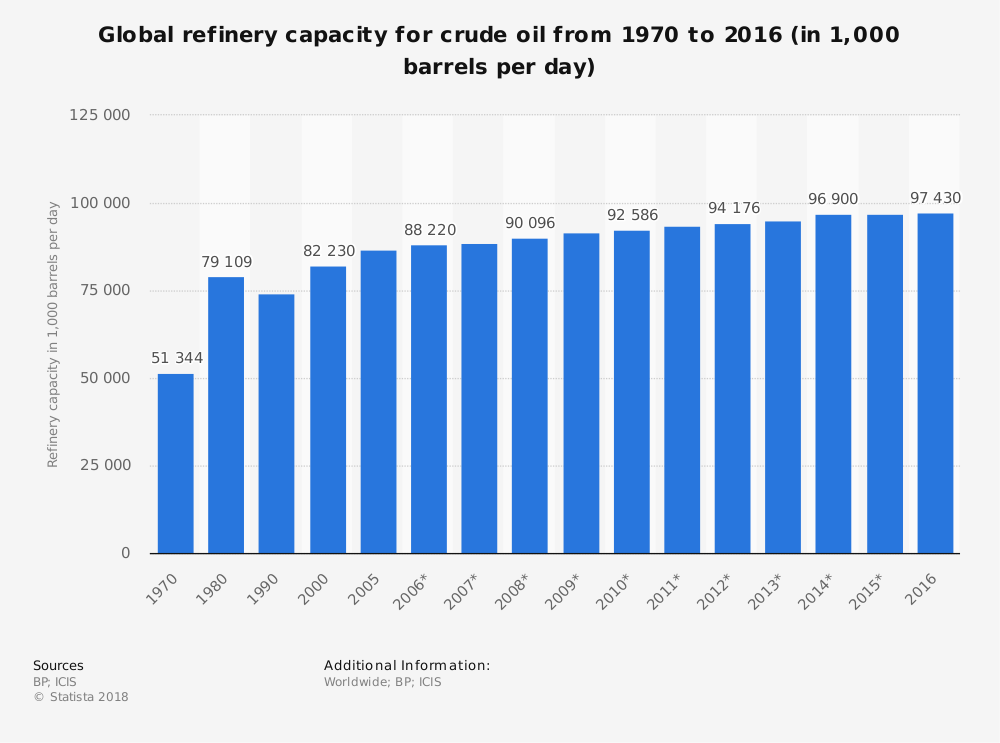 #4. The total volume of global oil reserves is estimated to be over 1.7 trillion barrels of oil. Over 47% of these reserves are located in the Middle East. (Statista)

#5. Venezuela is another major contributor of crude oil for the oil refinery industry. This South American country is home to about 17% of the world’s crude oil reserves. (Statista)

#9. More than 240 million gallons of used oil is purchased by service stations in the U.S. each year to be used to produce motor oil. (Library of Congress)

#10. In Oklahoma, 1 out of every 6 jobs is either directly or indirectly supported because of the oil industry. Operations from the industry contribute 20% of the gross state product. (OERB) 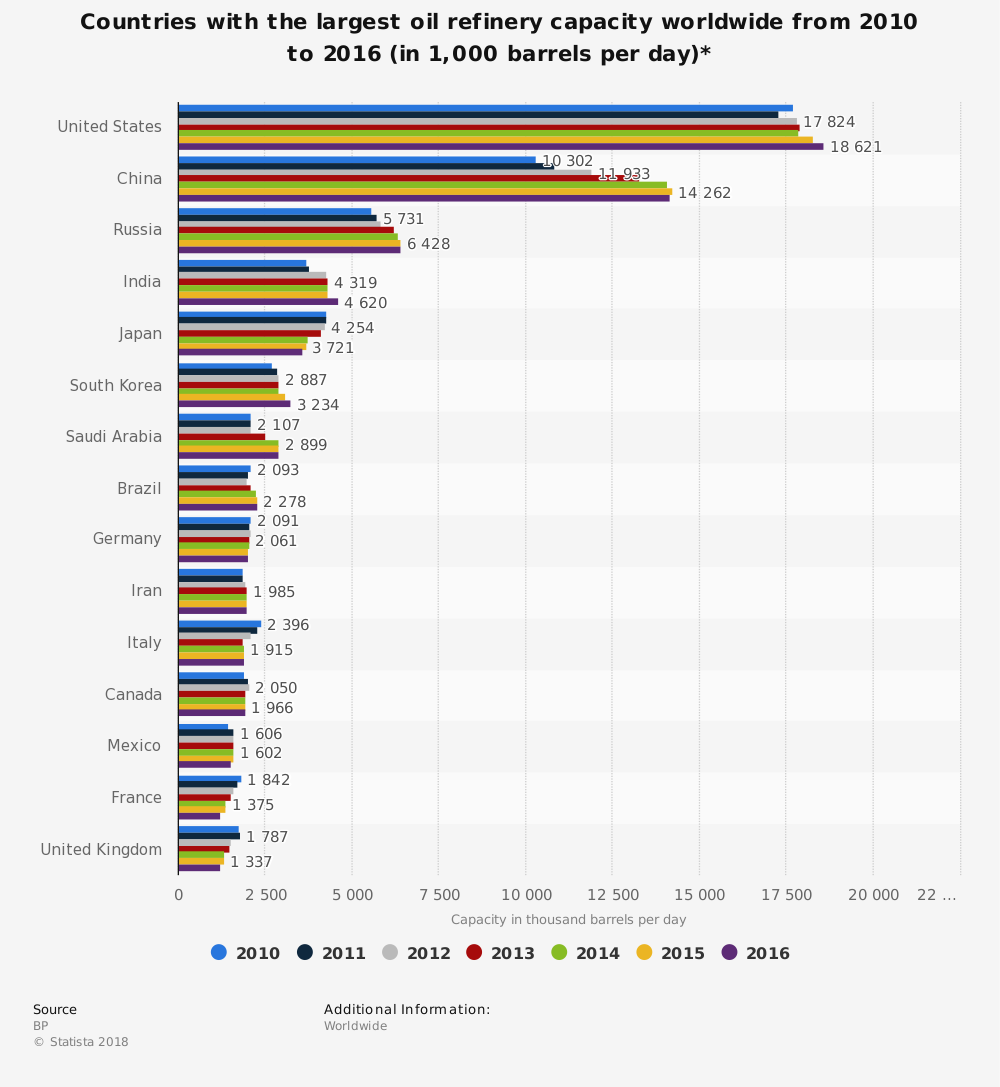 #11. There are currently 5 oil refineries located in Oklahoma. Their combined capacity is 500,000 barrels per day, which is about 3% of the total U.S. capacity. (OERB)

#13. The average oil refinery in the United States experiences a 1% loss in product during the conversion of primary oil products into secondary oil products. (International Energy Agency)

#15. Since 2000, China has been the largest growth market for energy consumption in the world. In 2016, consumption rates grew by 1.3%, which was the lowest level of growth for the market since 1998. (British Petroleum)

#17. Global oil consumption growth in 2016 averaged 1.6 million barrels per day, with China and India providing over 40% of the demand in growth. (British Petroleum)

#19. Despite the increases in oil consumption and refined oil products, the emissions of carbon dioxide from consumption increased by just 0.1%. During the consumption period of 2014-2016, average emissions growth achieved its lowest 3-year period since 1981-1983. (British Petroleum)

Our current society is built on the consumption of oil. For over 150 years, we have developed technologies which allow us to do everything from read content like this on a mobile device to disinfecting a kitchen countertop. Refined oil is one of the most versatile products we know of in the world today.

The oil industry is continuing to grow, despite challenges from a growing renewable energy sector. Over the next 5 years, much of the growing demand for oil globally is expected to be met through increasing supplies from the United States. By 2023, the U.S. is expected to average 5 million barrels per day on the export market.

How well the oil refinery thrives will be dependent upon continuing investments into the industry. The break-even price for a barrel of crude oil is above $50 for many countries today. With oil prices at depressed levels, a lack of investor interest quickly follows. Over the next 10 years, if a lack of investment continues, then oil supplies will tighten. That would put pressure on refineries as they would have less product with which to work.

For the foreseeable future, crude oil will continue to be our primary source of energy. Because of that, oil refineries will also continue to play an important role in the economics of the world.