The midstream sector of the industry is primarily concerned with the transportation, storage, and wholesale marketing of oil, gas, or refined petroleum products.

Transportation networks which deliver oil and natural gas to consumers directly are included in the midstream oil and gas industry. Pipelines that carry products away from a refinery to a consumer may or may not be included in the statistical data.

Several different service providers are active within this segment of the oil and gas industry. Barges, railroad companies, pipeline transport, and various trucking or hauling companies are active each day. Terminal developers, operators, and transloading companies also report their data through this industry segment.

#1. The United States has the largest network of energy pipelines in the world today. There are currently more than 2.4 million miles of pipe as part of the network. About 72,000 miles of crude oil lines are included in that figure, connecting region markets to one another. (Pipeline 101)

#2. In the U.S., 70% of crude oil and petroleum products are shipped through pipelines. 23% of shipments use barges and tankers over water. Trucking and hauling accounts for just 4%, while railroad transportation is just 3% of the industry. (Forbes) 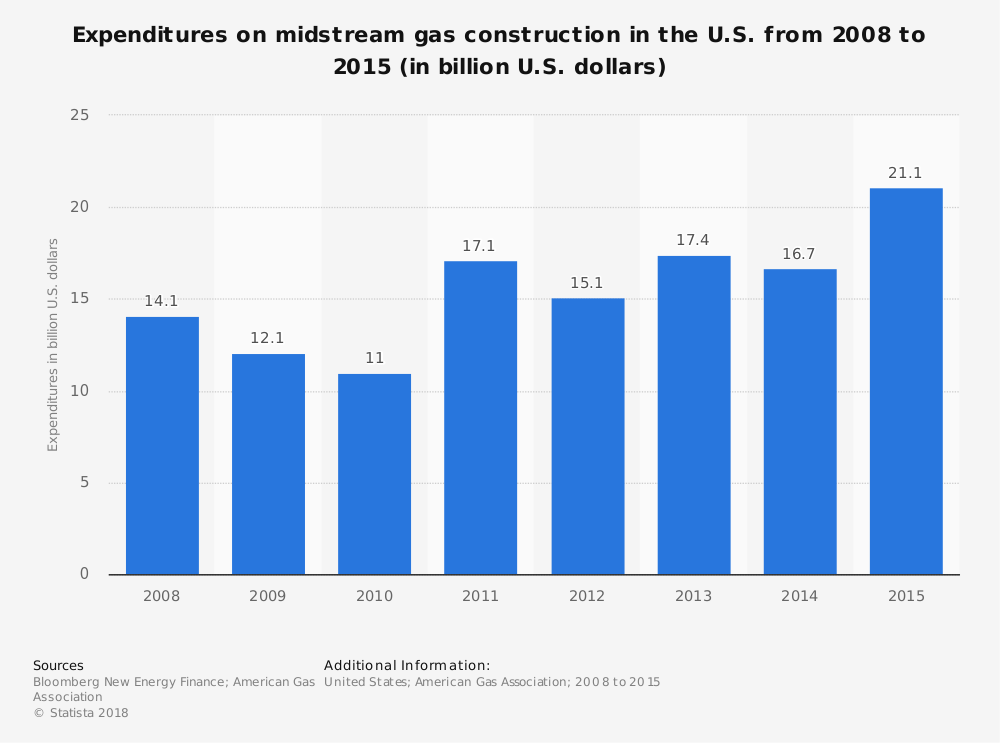 #3. In Canada, 97% of oil and petroleum products are transported via pipelines. (Forbes)

#4. 25% of the refinery capacity found in the United States is located within just 11 refineries. The last new petroleum refinery which opened in the U.S. happened in 1972. (Forbes)

#6. In 2017, the United States consumed 7.26 billion barrels of petroleum products. That averages out to just under 20 million barrels per day. Most of the crude oil that is produced or imported in the U.S. goes through the refinement process in some way. (U.S. Energy Information Administration)

#7. Gasoline is the most consumed petroleum product in the United States. In 2016, motor gasoline consumption averaged 9.3 million barrels per day, or 391 million gallons. That equates to 47% of all petroleum consumption in the country. (U.S. Energy Information Administration)

#8. Heating oil, or fuel oil, is responsible for 20% of total petroleum consumption in the United States. About 3.9 million barrels per day of distillate fuels are used. (U.S. Energy Information Administration)

#9. California is the top fuel-consuming state in the U.S., requiring 0.95 million barrels per day. They are responsible for 11% of the total share of consumption in the country. Texas is a close second, consuming just 0.01 barrels of gasoline fewer than California. (U.S. Energy Information Administration)

#10. Over the last 30 years, the U.S. segment of the midstream oil and gas industry has experienced more than 9,000 significant pipeline-related incidents. (Pipeline and Hazardous Materials Safety Administration) 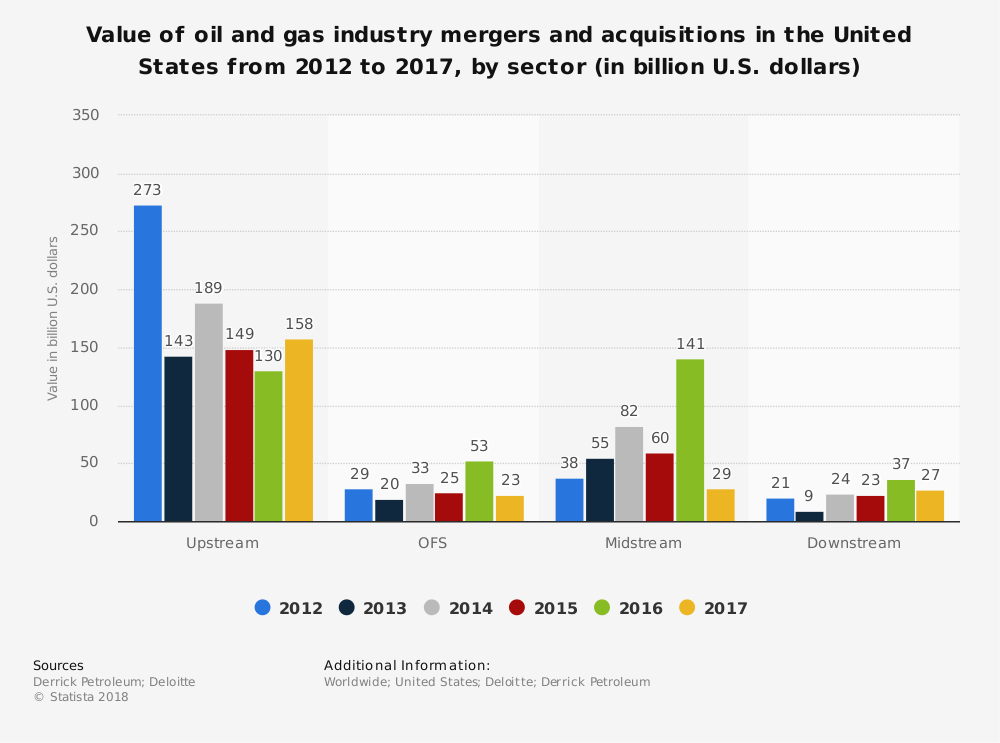 #11. In total, the significant incidents associated with the midstream oil and gas industry over the past three decades has results in more than 2,500 injuries, 548 fatalities, and over $8.5 billion in financial damages. (Pipeline and Hazardous Materials Safety Administration)

#13. In 2015, the midstream oil and gas industry was responsible for the transportation of 767.3 billion cubic meters of natural gas, or 567.2 million metric tons. (Statista)

#15. Since 2010, there have been more than 3,300 incidents of liquified natural gas leaks or crude oil leaks and ruptures on pipelines in the United States. About 25% of the overall cost of all pipeline incidents has occurred within the past 10 years. (PHMSA)

#16. About half of all the crude oil which is consumed in the United States is directed toward the transportation industries. (Investing Answers)

#17. Texas produces the most oil in the United States. The midstream oil and gas industry handles 5 billion barrels in reserves. (Investing Answers)

#18. The United States is home to about 4% of the world’s overall population. Americans consume 25% of the crude oil that is produced globally. (Investing Answers)

#20. Canada has the third-largest proven reserves of oil in the world today. 97% of their reserves are contained in oil sands, which are managed by the midstream oil and gas industry. (Investing Answers) 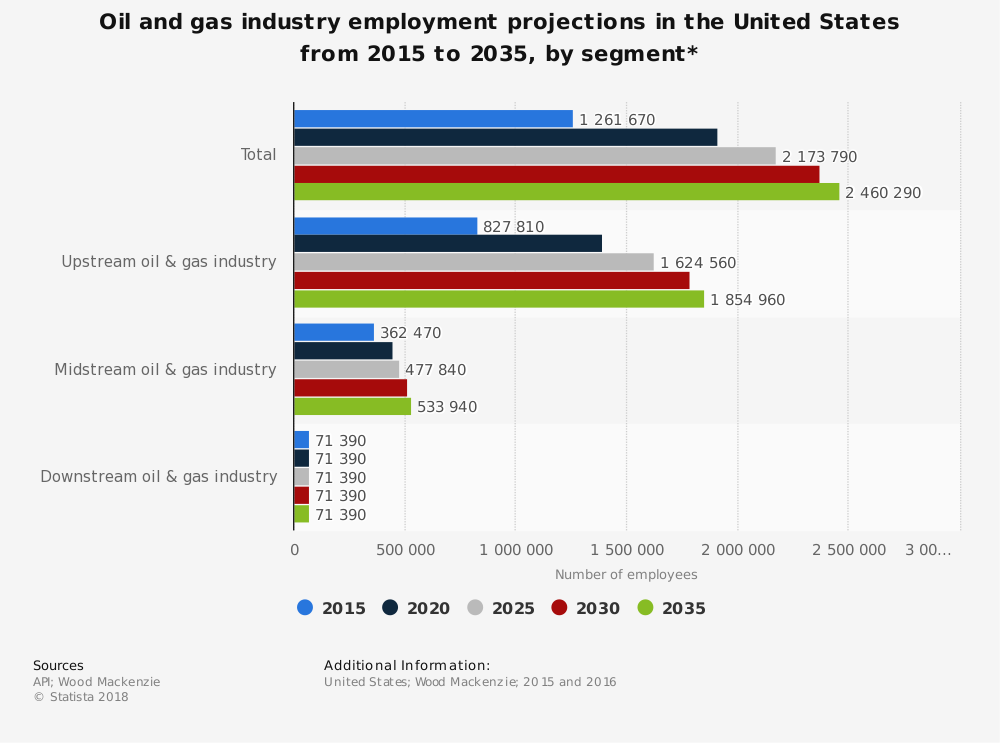 #21. Since it came online in 1977, the Trans-Alaska Pipeline has shipped more than 16 billion barrels of oil. (Investing Answers)

Although the accident rates for the industry are comparable, if not better, then others in North America, there are fewer regulations that oversee how transportation networks are maintained. The infrastructure is aging, especially with the pipelines, and that encourages more accidents to occur.

If we’re going to be using oil and natural gas products, then we must accept a certain level of risk in the transportation, refinement, and storage of these items. That doesn’t mean we shouldn’t work toward a safer transportation and refinement network. We must. Leaks from our infrastructure can result in catastrophic incidents.

Even if we shift our energy consumption perspectives to renewables, many of the foundational products of renewable energy are built using petroleum products. That means there will still be a role for the midstream oil and gas industry.

Maybe it is time to call for a change.