The microbiology industry is focused on the screening of products for microorganism contaminants. Food products, beverages, personal care items, and pharmaceuticals are all screened by microbiologists working in this industry.

It is also focused on the study of small living things. These are the forms of life that can usually be seen through the lens of a microscope only. Algae, bacteria, fungi, and protozoa are all studied by the industry. Prions and viruses are part of the industry as well.

#2. The biopharmaceutical industry accounts for about 23% of the industry revenues right now. Reaction consumables, as a whole, are responsible for the vast majority of revenues that are generated by the microbiology industry. (Statista) 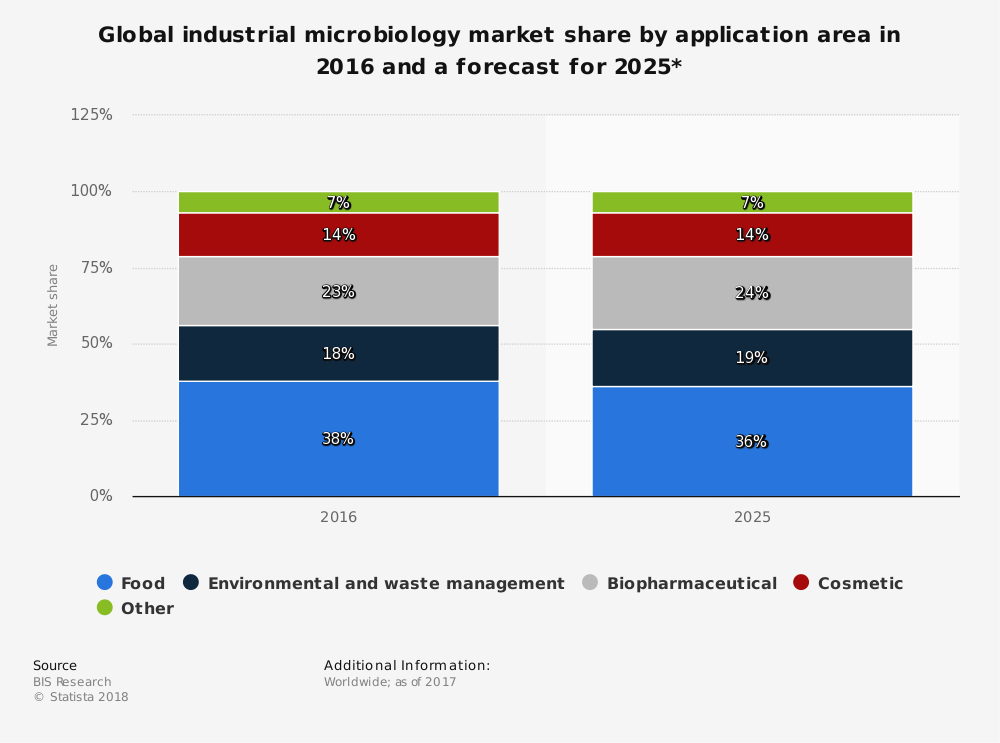 #4. Of the 1.14 billion tests performed, about 280 million tests were performed for pathogens, representing about 24.6% of the industry segment. The testing rate for pathogens has more than doubled since 2008. (Food Safety Magazine)

#7. Routine testing accounts for 49% of the total revenue potential of the microbiology industry each year. The average cost per test, for routine testing, is about $2. (Food Safety Magazine)

#8. Pathogen testing may happen less frequently, but it costs more per test to complete. The average test cost of routine pathogen testing is $6.50 per test. (Food Safety Magazine)

#9. Laboratory testing services in the United States offer direct employment opportunities to over 145,000 people. More than 10,000 businesses are involved in testing consumer products, including food, each year. (IBIS World) 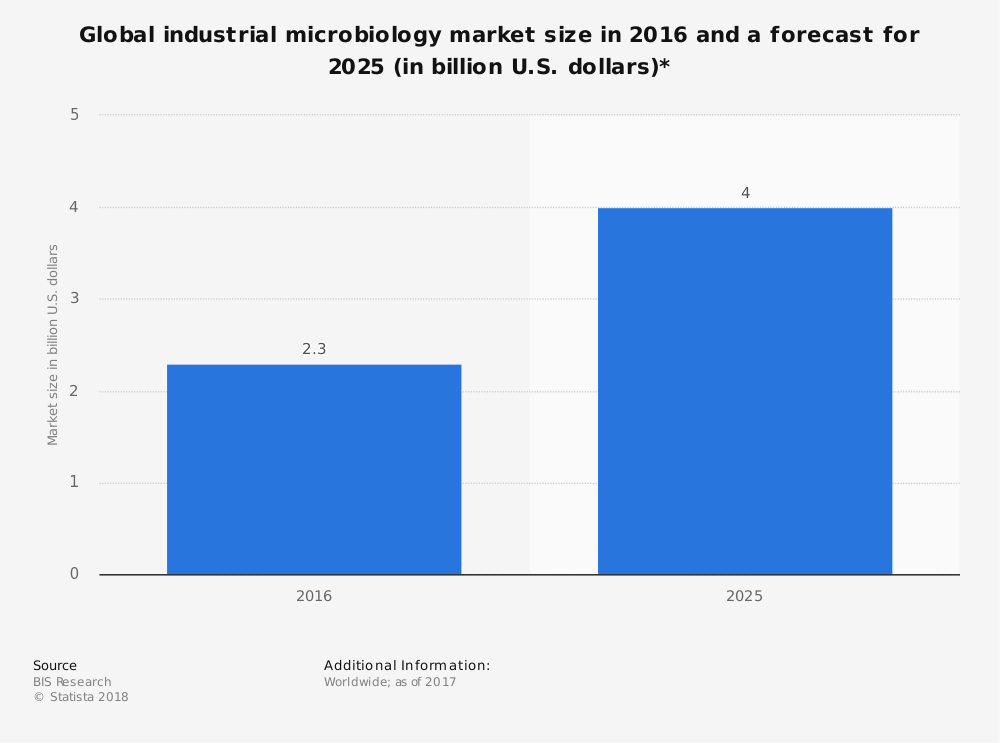 #12. The United States exports about $1.13 trillion in food products each year, all of which have certain testing needs that is provided by the microbiology industry. (IBIS World)

#13. Another $4.45 trillion in food imports occurs in the U.S. each year, which provides additional opportunities for the microbiology industry. (IBIS World)

#14. Employment opportunities within the food manufacturing sector have risen by 0.9%, even though current revenues have decreased by 1.2% and exports have contracted by 2.3% within the industry. (IBIS World)

#15. Most microbiology efforts are focused on the current microbial species which have been documented, a total of 6,500. Most testing efforts, however, focus on only 4 microbial species. (Science Direct)

#16. There are 3 patterns of contamination which can be discovered through industry testing processes. Regular contamination patterns indicate evidence of organisms being present at some point in the production chain. Random contaminations occur where no source may be able to be identified. Clustered patterns show that contamination may occur in one processing center, but not another. (World Health Organization)

#17. There are only 3 field service labs in the United States which administer regulator testing programs. They are located is Georgia, Missouri, and California. (U.S. Department of Agriculture)

#19. For U.S.-based food safety and inspection services, an n60 sample provides 95% confidence that no more than 5% of lot samples are contaminated. (U.S. Department of Agriculture) 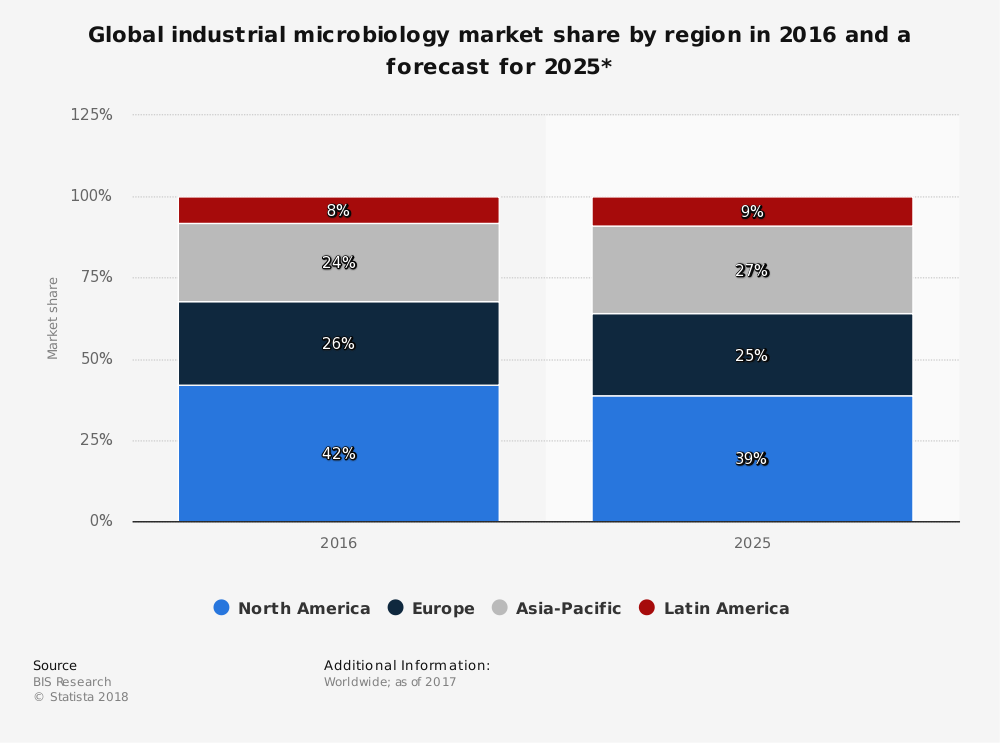 #21. The lag phase of a test administered may require up to 3 hours of resuscitation before log-phase growth can begin. (U.S. Department of Agriculture)

There is a growing demand from consumers to have access to safe products. Billions of tests happen throughout many industries to provide these products to the marketplace. As more tests are developed, the microbiology industry has a great potential for growth. Consumers typically pay more for a guaranteed level of safety.

Reaction consumables tend to be the focus on this industry right now. It brings in most of the revenues and will continue to do so. As this segment matures, however, it will require support from new segments to continue the industry growth currently seen.

If those segments are not developed, expect the microbiology industry to see stable revenues and low growth.