#1. Magnesium is listed as the eighth-most abundant element on our planet. It constitutes about 2% of the crust of the Earth. (United States Geological Survey)

#2. Magnesium can also be found in dissolved seawater, which averages about 0.13% magnesium by weight. When it is harvested from this resource, it becomes the third-most plentiful element on our planet. (United States Geological Survey) 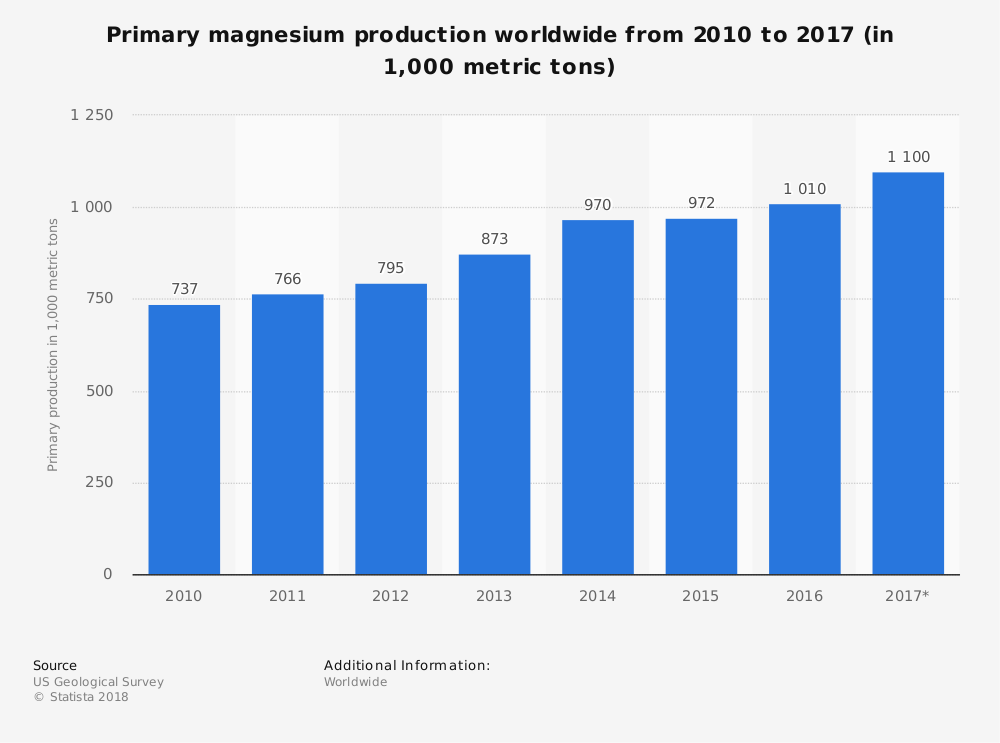 #3. In the United States, natural brine water and sea water account for about two-thirds of the total magnesium industry compound production values. In 2016, the value of these compounds was about $195 million. (United States Geological Survey)

#4. About 60% of magnesium compounds that are consumed in the United States are dedicated to construction, chemical, agricultural, industrial, or environmental needs. The remainder is used in olivine, fused magnesia, or dead-burned magnesia. (United States Geological Survey)

#6. Since 2012, there has been over 50% import reliance within the U.S. magnesium industry when apparent consumption is measured. Over half of the imported MgO to the United States comes from China. Brazil accounts for another 17%, while Canada and Australia account for 9% and 6% respectively. (United States Geological Survey)

#8. In the United States, magnesium has been harvested from Great Salt Lake in Utah since 1972. (Natural Resources and Environmental Issues)

#9. The average person requires about 350mg of magnesium every day. That equates to an average of 100mg of magnesium each year. It can often be found in drinking water. You can tell if the water as magnesium in it because it will taste sour on the tongue. (ThoughtCo)

#10. China currently leads the world in terms of magnesium production. They are currently responsible for about 80% of the current supply of this needed metal right now. (ThoughtCo) 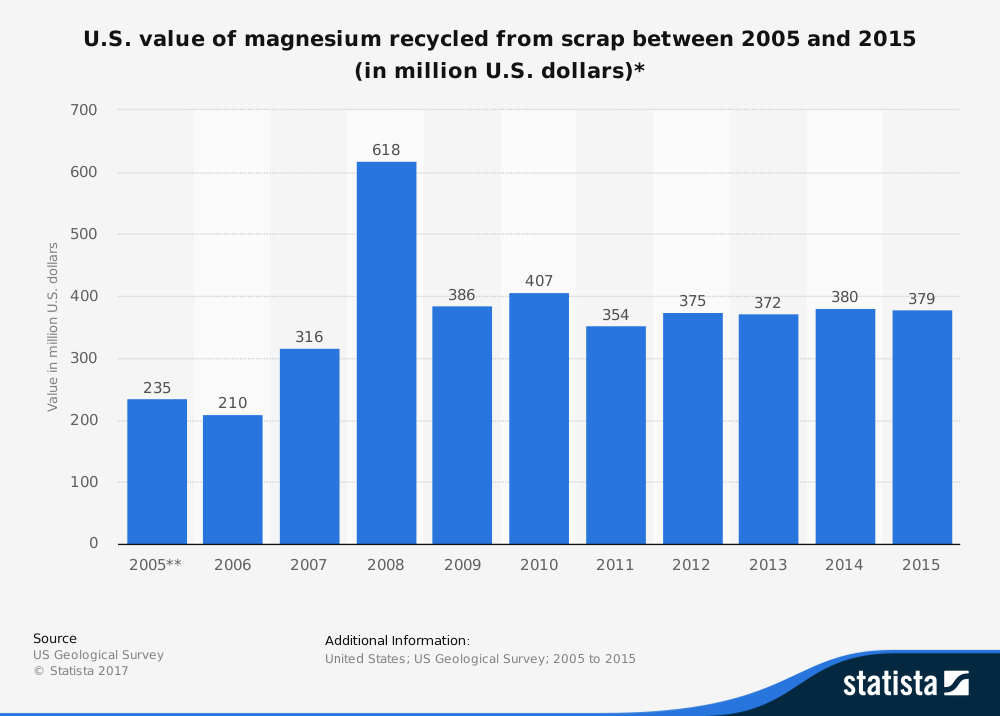 #11. Magnesium occurs in two physical forms. They are referred to as amorphous and macrocystalline and occur in 5 different ways. (Australian Atlas of Minerals Resources, Mines, and Processing Centers)

#12. The color of magnesium may vary from yellow to grey to white or brown when found in an impure state. Magnesite is always a whiteish color when it is pure. (Australian Atlas of Minerals Resources, Mines, and Processing Centers)

#13. The hardness rating of magnesium can vary, from 3.5-4.5. The specific gravity varies as well, ranging from 3.0-3.2. (Australian Atlas of Minerals Resources, Mines, and Processing Centers)

#14. Most magnesium mines are based on open-cut methods. To create 1 ton of high-grade materials, up to 10 tons of ore may need to be processed. (Australian Atlas of Minerals Resources, Mines, and Processing Centers)

#16. Although Australia has high reserve levels of magnesium, it only produces a small amount of magnesium metals each year. (Australian Atlas of Minerals Resources, Mines, and Processing Centers)

#17. The largest primary use for magnesium metals is for alloying aluminum. About 50% of the total magnesium metals produced are reserved for this activity. Another 20% is used for castings and wrought products for consumers. (Australian Atlas of Minerals Resources, Mines, and Processing Centers)

#18. In the United States, there are an estimated 65 metric tons of magnesium that is currently located in reserve within natural magnesite deposits. About 90% of these reserves are all located within the State of Nevada. (Live Science)

#19. Large reserve deposits of magnesium have been discovered all over the world. This includes Europe, Turkey, and Brazil. (Martin Marietta Magnesia Specialties)

#20. The average price of a magnesium supplement is about $9 in the United States. Lower doses of 250mg or less may be priced at $5 or less by some retailers. (Google Shopping) 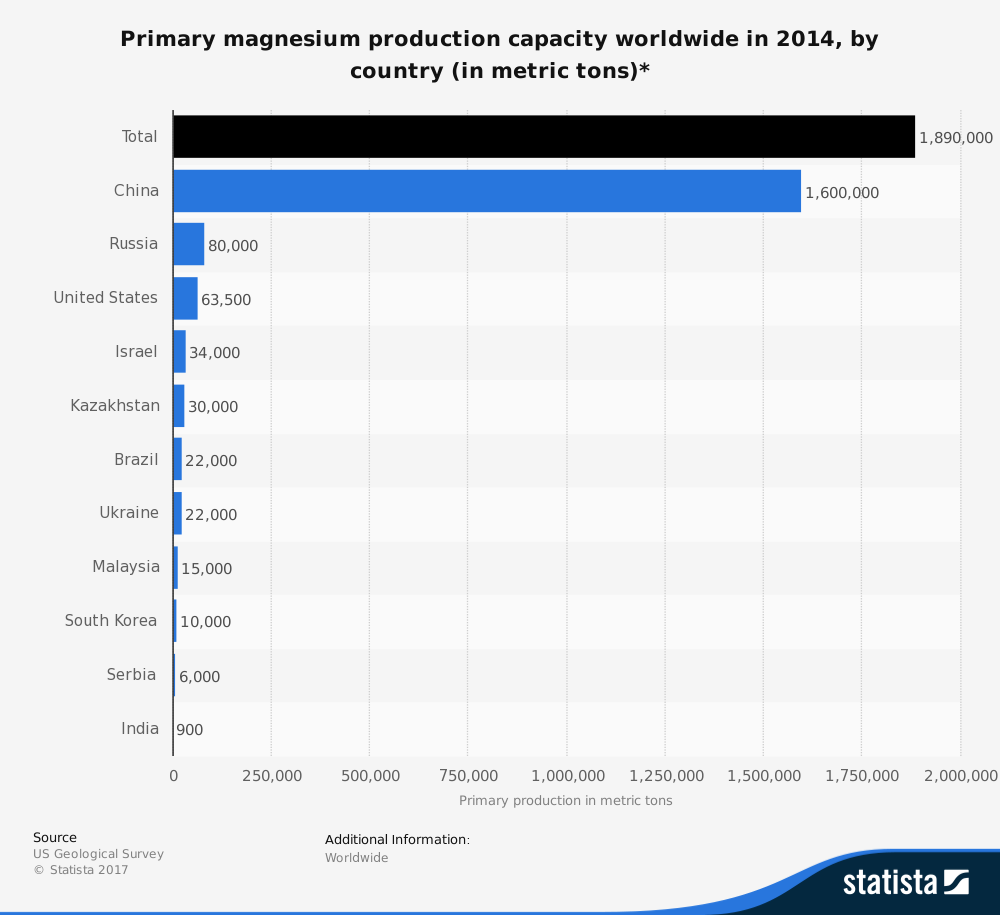 #21. One of the most common symptoms of a magnesium deficiency is muscle spasms. Aches, poor digestion, worries, and difficulty sleeping are also common. It can also be a foundational cause of restless leg syndrome. (Dr. Axe)

Global consumption of magnesium products has declined slightly since 2015. This is an indication that the steel production rates around the world are beginning to stabilize once again. Products for non-ferrous metals and glass within this market, however, have seen sharp declines.

At the same time, food-grade magnesium offers a similar experience. The American Journal of Clinical Nutrition found in 2011 that people who take these supplements are taking doses that are too high and encouraging fewer purchases.

When combined with lower prices for products in the industry, the magnesium market still seems to be in a state of transition. Factories are looking to become more efficient, which means reducing the amount of magnesia consumed per unit produced.

At the same time, there is an estimated 8.5 billion metric tons in reserve, with an average of 27.7 million metric tons of magnesite mined globally each year. The magnesium industry looks to be stable and consistent, but over the next decade, continued efforts to refine processes may cause slight declines to continue, thus reducing the overall value of the industry.