The Indonesian coal industry accounted for over 40% of the world’s steam coal exports in 2015. Most of the industry focus is on exports to India and China, with pricing often dictated by the demand from these two populous nations. That means when China reaches an economic slowdown, so does this industry.

Despite its status as a Top 10 producer in multiple coal categories, the 2015 decrease in coal demand eliminated over three years of profits for the industry in a single season. Even with the up-and-down markets, however, there is a lot of potential available for the industry. Most of its reserves are supported by adequate infrastructures and consistent demand for low-grade coal from its primary customers.

Increased demand from South Korea and other destinations in Southeast Asia will continue to play a vital role in how the Indonesia coal industry evolves over the next several decades.

#1. Indonesia is currently the world’s largest exporter and producer of thermal coal in the world today. It exports mostly medium-type coal, between 5,100 to 6,100 cal/gram, or the low type below 5,100 cal/gram. (Indonesia Investments)

#2. With the current production rates and known reserves available to the industry, about 80 years of coal are available to access for the Indonesia coal industry. (Indonesia Investments) 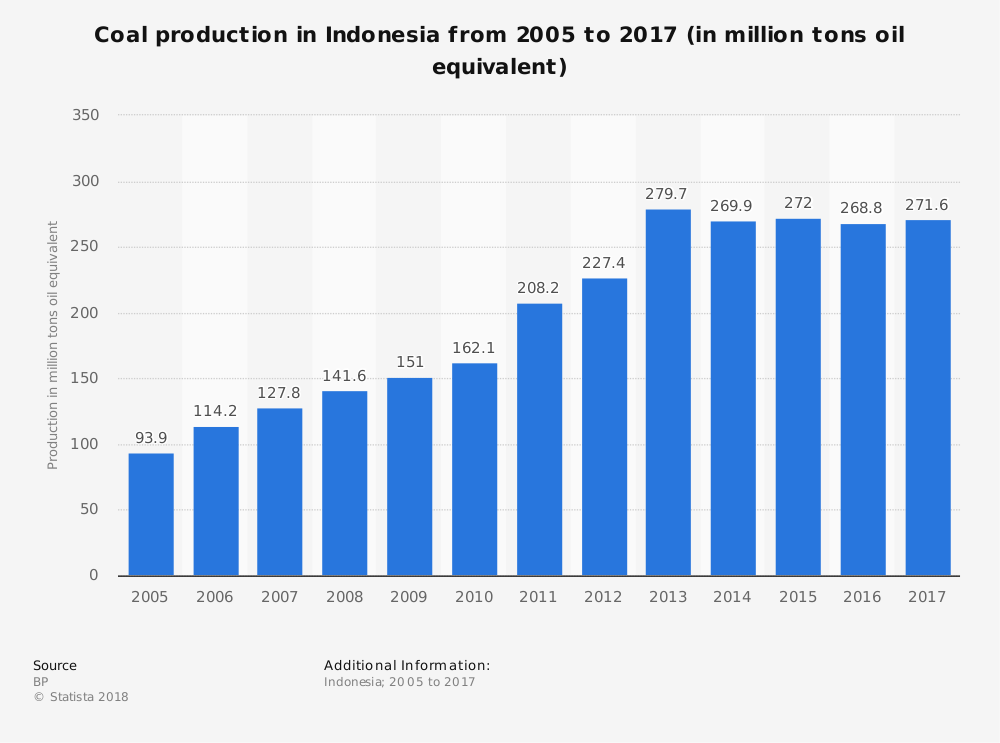 #3. The total production volume achieved in 2016 for the industry was 255.7 million tons of oil equivalent, making Indonesia the fifth-largest producer of coal in all categories. (Indonesia Investments)

#4. With regards to the total reserves of coal found on our planet, Indonesia currently ranks ninth. About 2.2% of the known reserves for the global coal industry are located in Indonesia right now. (Indonesia Investments)

#5. In 2017, Indonesia consumed about 97 million tons of coal for domestic purposes. The industry exported the remainder, a total of 364 million tons. (Indonesia Investments)

#7. China cut back mining activities by 54 days in 2017 to reduce work-related accidents. They also have plans to close over 4,300 coal mines, creating new opportunities for the Indonesia coal suppliers to fill in the gaps created. (GBG Indonesia)

#9. Since 2013, coal production shares to the export market have fallen from 85% of industrial production to 79% in 2016. India and China account for 60% of the total purchases made. (Stockholm Environment Institute)

#10. The United States accounts for 11% of the export market for the Indonesia coal industry, receiving over 47 million tons of product in 2016. Concerning volume, that places the U.S. with Japan, tied for the second-largest export market for the industry. (Stockholm Environment Institute) 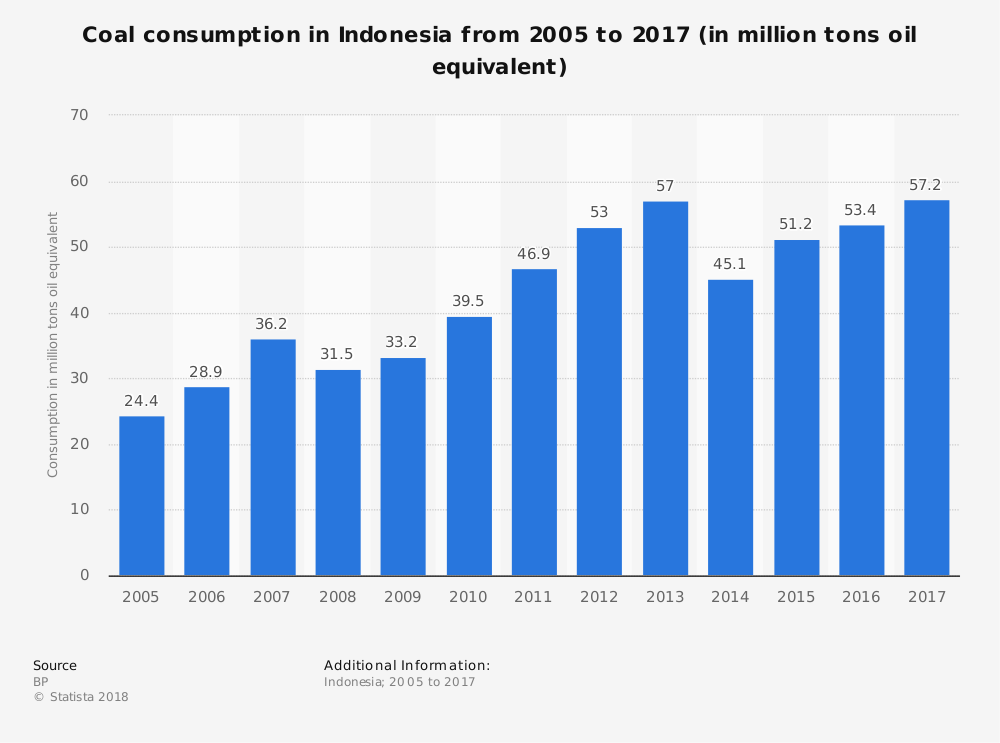 #11. Mining was responsible for over 7% of the national GDP in Indonesia in 2016, with the coal industry accountable for about 25% of the total figure. (Stockholm Environment Institute)

#12. Royalty rates within the Indonesia coal mining industry range from 2% to 7% of the sales revenue, as dictated by Government Regulation 9/2012. Each percentage is established by original agreements with the coal miners that are sometimes several decades old. (Stockholm Environment Institute)

#13. Regional governments receive 80% of the revenues earned by state-owned coal mining and production activities, with 64% distributed to the producing district. The remainder goes to the national government for land rent and royalties. (Stockholm Environment Institute)

#14. From January to May 2018, coal production in Indonesia was off 19% in year-over-year data, declining to 166 million tons produced. About 135 million tons went to the export market. (Jakarta Globe)

#15. Over the next 25 years, the Indonesia coal industry risks wasting $76 billion because of its coal-based electricity strategy. The unique structure of the nation, composed of more than 17,000 islands (with 6,000 inhabited) makes it virtually impossible to construct a national transmission grid, forcing individual islands to have their own power generation capacities. (Pacific Standard)

#16. As part of its future building plans, the Indonesia coal industry may be funded with $75 billion to add 35 GW of new electrical generation capacity. That would be 60% more than is available today, with over 20 GW coming from the construction of 117 new coal-fired power plants. (Pacific Standard)

#17. Indonesia spends over $12 billion each year to electrify all homes and businesses within the country. (Pacific Standard)

#18. Spending on new projects within the Indonesia coal industry has fallen 80% since 2012. Several banks, including the Royal Bank of Scotland and Deutsche Bank, have stopped funding altogether. (Financial Times)

#20. In early 2018, the Indonesia coal industry capped the price of domestic coal for power generation at $70 per ton through 2020. It is a price which is based on an average calorific value of 6,322 kilocalorie, which is the same specs as the national benchmark price. (Reuters) 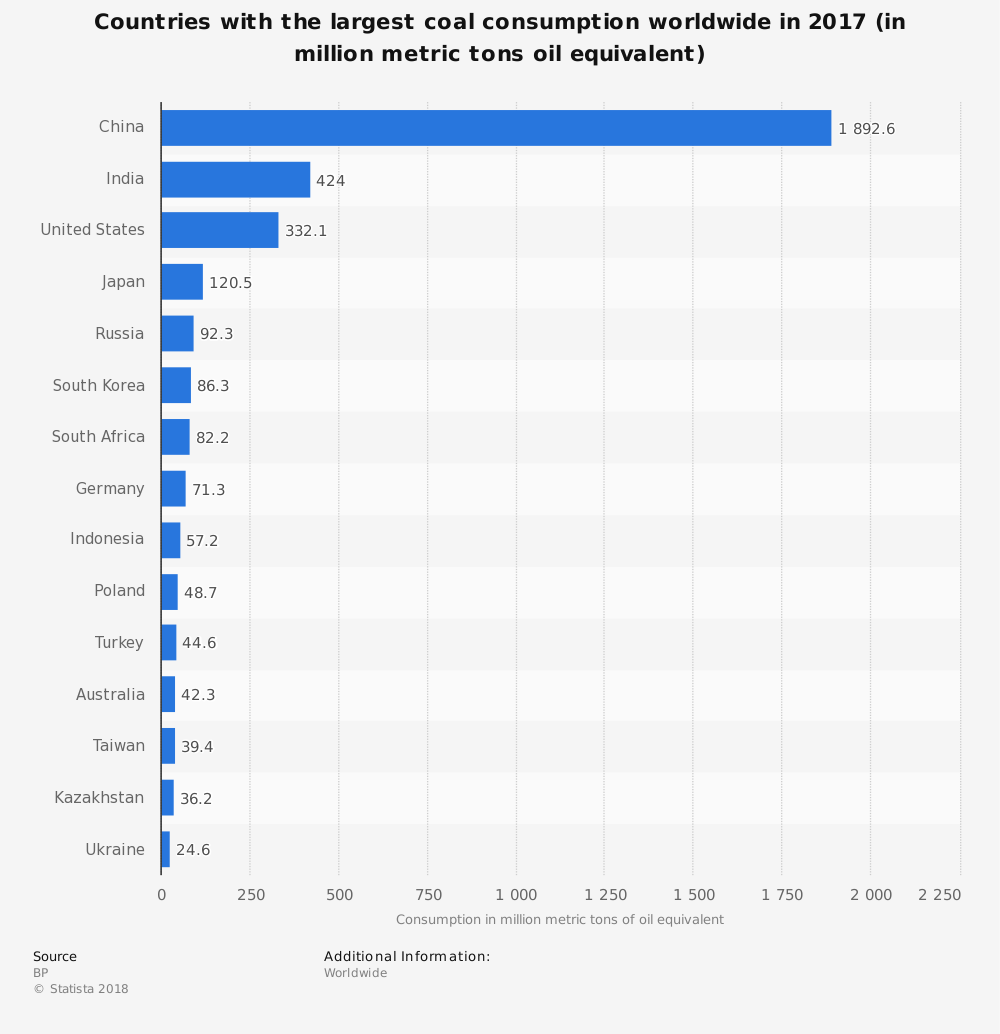 #21. The 2018 domestic pricing rules were expected to help the government save $1.3 billion in costs, assuming the price of coal stays above $100 per ton through the end of the pricing scheme. (Reuters)

Production costs are the one issue holding back the full potential of the Indonesia coal industry. Since 2013, the companies involved in the mining, processing, and distribution of this resource have cut costs by up to 10%.

The rest of the world has managed price cuts of up to 25%. Global agencies in the coal market are leveraging artificial intelligence and digitization at levels the Indonesian firms have not yet reached.

If the industry wants to find coal customers outside of Southeast Asia, it must start considering automation, analytics, and more natural methods of surveying. Global leaders are using drones for surveys, using AI decisions for coal transfers, and improving port handling procedures through the Internet of Things.

Without these upgrades, the Indonesia coal industry will continue to find itself at the mercies of China’s purchasing policies.