With over 130 million acres of land dedicated to farming, the Texas cattle industry has more acres of farmland than 48 states in their total size. With about 250,000 farms, the State of Texas has more farms than many cities have people. That makes it the largest state for cattle farms, beef, farm acreage, and total farm count in the United States.

The cattle population in Texas is so large, in fact, that if the state were its own country, it would have the 14th-largest population of cattle in the world. In total, the cattle industry provides about $10 billion in revenues, by cash receipt, each year. That makes it about 50% of the total commodities cash receipts that the state receives.

Ranching and farming are often family traditions, with properties handed down from one generation to the next. It is an industry that continues to grow despite ongoing challenges, such as drought and feed expense, helping to support the state economy.

#1. Over 98% of the farms and ranches that are currently operational in the State of Texas are either family farms, family-held corporations, or family partnerships. (TX Department of Agriculture)

#2. The average age of a rancher or farmer in the State of Texas is 58. This only takes into account the age of the primary stakeholder in the operation, however, and most families have multiple generations working on their property. (TX Department of Agriculture) 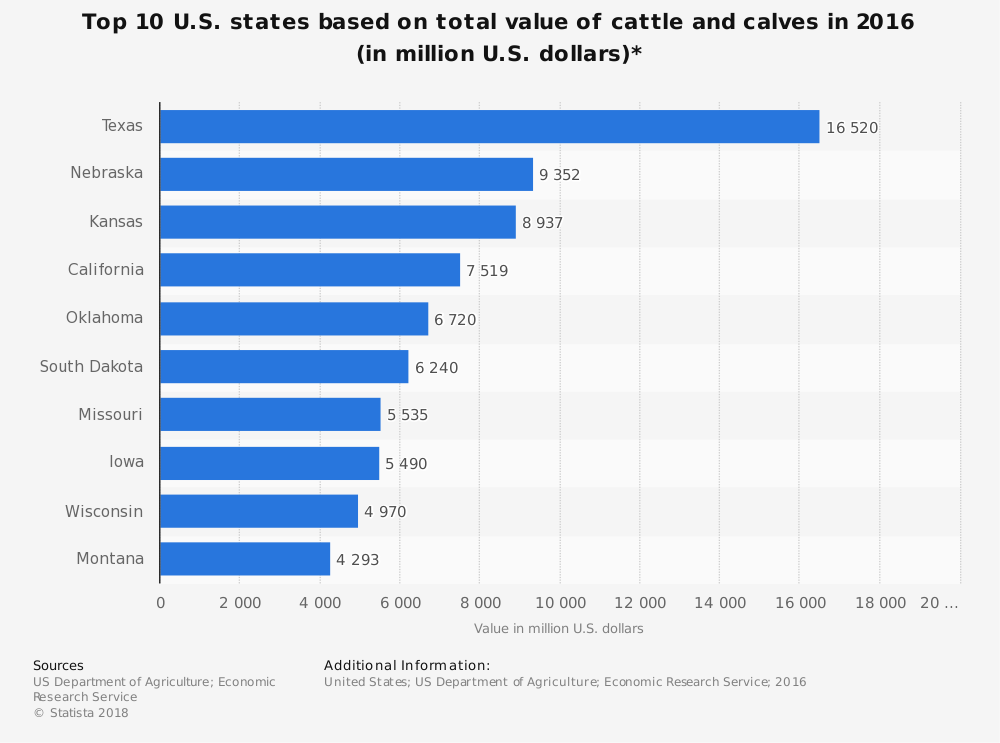 #3. About 14% of Texans, or 1 out of every 7 people, is working in a job that is related to agriculture in some way. (TX Department of Agriculture)

#4. Although cattle farming is the top producer for cash receipts, beef is only the second-largest agricultural export in the state behind cotton and cottonseed. In 2012, total beef exports were $855 million. (TX Department of Agriculture)

#6. Calves within the Texas cattle industry sell at a higher rate, only dipping below the $100 per cwt price point for 3 months in the past five years. Prices have dropped from a peak of $145 per cwt in April 2005, however, to hover around the $110 mark. (U.S. Department of Agriculture)

#7. There are more than 11.1 million head in cattle and calves within the State of Texas, according to 2102 figures. (U.S. Department of Agriculture)

#9. Texas currently holds 13% of the current U.S. inventory for cattle. That means there are more cattle in the state than 43 states have people in the country. (Southwest Farm Press)

#10. Small ranching and farming operations with 50 cattle are fewer make up more than half of the farms that are currently in operation, but account for 28% of the total cattle population. 73% of the herds in Texas are comprised of fewer than 500 head of cattle. (Southwest Farm Press)

#11. In total agricultural receipts, Texas ranks third behind California and Iowa. In 2015, the state produced a total of $23.5 billion in cash receipts. (Southwest Farm Press)

#12. Even though Texas is not ranked in the top 10 for dairy farming, the cattle industry does rank 6th in the country in total milk production. There are three areas of the state which focus on dairy over beef within the cattle industry: the Panhandle, Sulphur Springs, and Stephenville. (Southwest Farm Press)

#13. Farm-related employment accounts for 26% of the jobs that are available in Texas in the state’s non-metro areas. It is even responsible for 13% of the employment in metro areas. (Texas A&M University)

#14. Although Texas continues to lead the U.S. in the number of farming operations that are active, the numbers have been reducing in the state over the last century. In 1931, there were over 506,000 ranches and farms in operation. In 2013, there were 248,500. The average size of a farm is 524 acres. (Texas A&M University)

#16. Drought years in Texas, dating back to 1996, have taken an estimated $38.5 billion out of the state economy. Farming and ranching production losses from these drought years total more than $21 billion. (Texas A&M University)

#18. There are more than 1 million people in Texas who stated for census purposes that their principal occupation was farming. (Texas A&M University)

#19. Texas ranks 5th in the country in terms of net farm income, with over $5.1 billion achieved in 2012. California leads the country in this category, bringing in $16 billion during the same year. (Texas A&M University)

#20. For the value of farm real estate, Texas is the nation’s leader. In 2012, the value of farming and ranching properties was listed at $230.4 billion. Iowa was the only other state to top the $200 billion mark. (Texas A&M University)

Ranching and farming are a common way of life in Texas. It is a state that is filled with wide-open spaces, big blue skies, and small towns that are supported by the cattle industry. With the sheer number of farms and ranches that are currently operational, there is no turning back from the $10 billion in agricultural cash receipts which are generated each year.

What does hold the cattle industry in Texas back are global market prices. Over the past 10 years, there has been a steady decline in cwt pricing for cattle and calves. Although a push in 2010 helped to stabilize the market, especially for beef, there are still challenges that must be faced, such as beef import bans from the United States.

Expect the industry to remain steady in the next 5 years, providing a similar ratio of cash receipts for the agricultural market of the state. For ranching to remain profitable, especially for small producers, look for operations to increase the number of cows per worker. Some of the most successful operations in the state are running at a ratio of 1,200 cows per employee or worker.