The Taiwan chemical industry has grown dramatically since the conclusion of World War II. It is a sector which is self-sufficient in many ways, although there are still several challenges that the sector faces. International trade policies, government recognition, and competition from mainland China all create pressures on this industry which are unique when compared to the overall global industry.

In 2010, the total revenues earned by the chemical industries of Taiwan reached $135 billion, accounting for nearly 30% of the GDP. The overall manufacturing sector earned revenues that year of $461 billion.

There are about 80 significant chemical companies operating in Taiwan as part of this industry. There are also 42 member companies of the local petrochemical association that help to product upstream, downstream, and midstream products.

#1. The Taiwan chemical industry exports about 50% of the petrochemical products it develops each year. This includes about 70Q% of the synthetic resins, plastics and rubber materials it creates. The primary destination for all of these products is China. (American Institute of Chemical Engineers)

#2. The naphtha-cracking capacity at FPG’s refineries in Taiwan reached 540,000 bbl/d in 2011, solidifying the self-sufficiency of the industry in the creation of raw materials. Another 150,000 bbl/d of capacity were added in the next 24 months. (American Institute of Chemical Engineers) 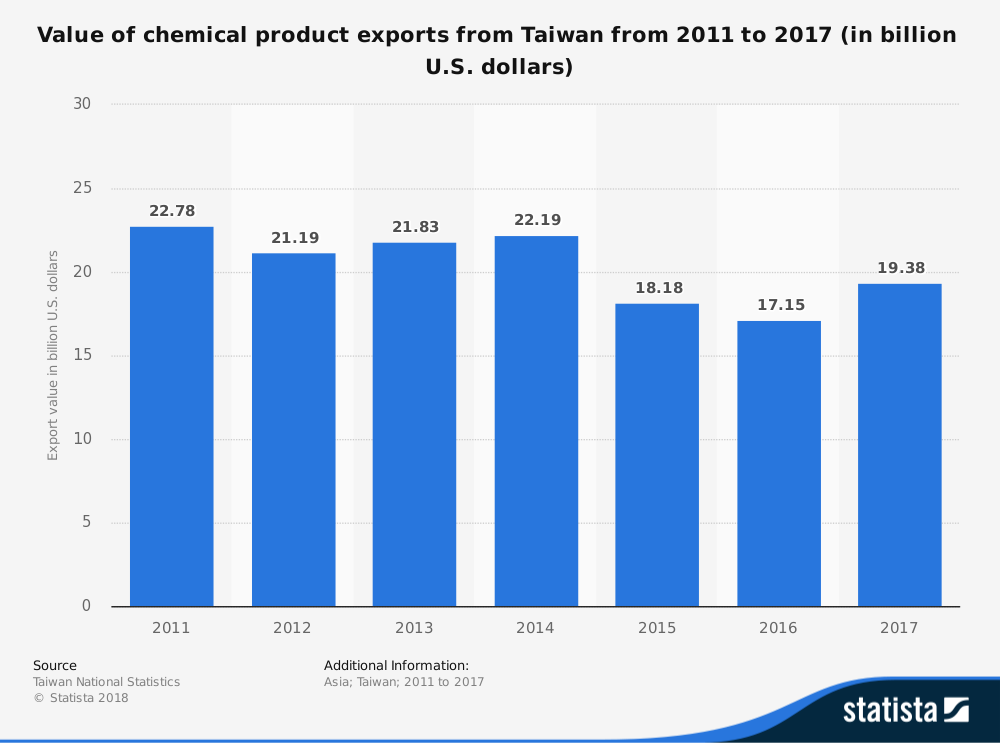 #3. The total output value of the chemical industry today in Taiwan is more than $150 billion. It accounts for over one-third of the gross production value within the manufacturing sector in most years. (World of Chemicals)

#4. The ethylene capacity found in Taiwan’s chemical industry represents 4.5 million tons, which ranks the country as one of the top 10 producers in the world. (World of Chemicals)

#5. The chemical output from Taiwan only has up to 10% of added value, with some segments producing just 3%. That makes the industry average much lower than the global standard in developed nations where the added value is above 20%. (World of Chemicals)

#6. The tariff of most countries that import Taiwan’s chemical products is usually 7% or less. (World of Chemicals)

#7. Over $250 million each year comes from the import value of the plastics created through the Taiwan chemical industry. (World’s Top Exports)

#8. The total value of exports produced in plastics generation is $17.6 billion, which represents over 6% of the total market value for Taiwan. (World’s Top Exports)

#9. One of the primary reasons why plastics and chemical manufacturing are a top industry for Taiwan is because of the high levels of domestic consumption. A hepatitis scare in the 1990s caused the government to encourage plastic flatware and dishes, resulting in about 59,000 tons of industrial waste being generated annually. (Environmental Research Foundation) 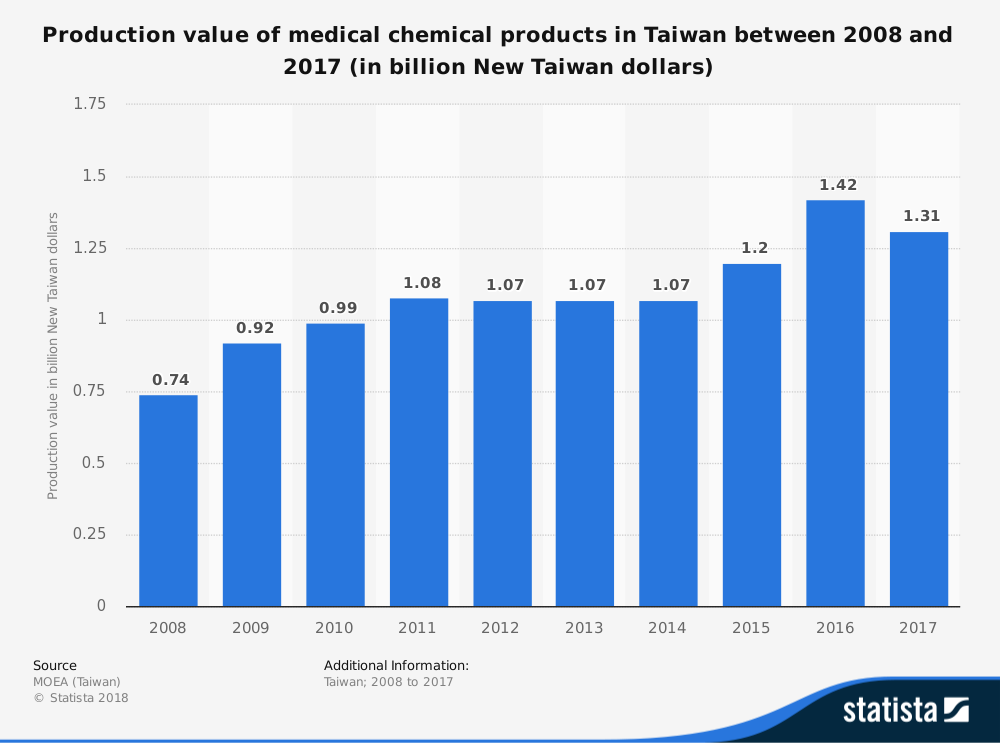 #11. Over 180,000 tons of used plastics are collected each year, then converted into new raw materials that are used by the Taiwan chemical industry. (Plastics Technology Online)

#12. The average person in Taiwan will use an average of about 3 plastic bags per day, which equates to over 700 of them each year. When that figure extends to the entire population, over 18 billion plastic bags are used domestically, which is four times higher than what the entire European Union consumes in an entire year. (The News Lens)

#13. The United States has become one of the leading buyers of products from the Taiwan chemical industry, purchasing over $83 million in plastics alone in 2015 – an increase of almost 70%. (Plastics News)

#14. 75% of the total chemical output of Taiwan comes from basic industrial chemicals. Although pharmaceuticals account for less than 5% of the market, fine and specialty chemicals contribute about 20% of the total industry. (Medium)

#15. The global value of the chemicals industry in 2020 is expected to reach $2.6 trillion for the first time in the developed economies. Europe, Japan, and North America are expected to contribute the most to this figure. (World Economic Forum)

#16. When the emerging economies of South America, Asia, and Latin America are put together, the global value of their chemical industry output is expected to reach $3.1 trillion, helping to form a total market value of $5.7 trillion. That makes the chemicals industry larger than even the food industry. China accounts for 65% of the output increases experienced since 2000. (World Economic Forum)

#17. Total production capacity of polycarbonate leads the synthetic resins segment in Taiwan, with a minimum of 340,000 metric tons per year. Epoxy resin is the second-largest product, with 272,688 metric tons per year. Those items are followed by polyacrylate resin (261,200), polyurethane resin (164,039), polybutylene terephthalate (160,000), and unsaturated polyester resin (114,197). (American Institute of Chemical Engineers)

#18. The synthetic fiber capacity of the Taiwan chemical industry, estimated to be between 2.5 million and 2.9 million metric tons per year, is the third-largest in the world today. This segment involves end products such as polyester filament, staple, membrane, and polyamine fiber. (American Institute of Chemical Engineers)

#19. The total capacity for the significant petrochemicals for firms active in the Taiwan chemical industry is 31 million metric tons per year – according to 2010 figures. Current estimates place their capacity closer to 40 million metric tons annually. (American Institute of Chemical Engineers)

The Taiwan chemical industry continues to benefit from the trend of using disposable items domestically. When the low cost of the chemical output from their manufacturing sector is included with these figures, the industry stands poised for an impressive level of growth over the next 5 years.

What holds the industry back from achieving their full potential is their relationship with China. The mainland prefers to operate on a one-nation policy, which means the export market should go through the communist regime instead of the democratic government on the island. That limits the export opportunities because China “purchases” a majority of the products which become available.

Taiwan must be able to negotiate with other trading partners on its own without having a big brother interfering with the process to help their chemical industry continue growing. The markets are maturing in the rest of the world, which is why now is the best time to take action. If they can, then it will continue to be a top manufacturing center in the world.

If not, then there is a good chance that China could absorb this industry by the end of 2028.