Wisconsin has often been a national leader in dairy farming and dairy products. It wasn’t, however, the first agriculturally-based crop that farmers focused on in the state. Wheat was the initial crop, earning the state the nickname of “America’s Breadbasket.”

It became America’s “Dairy State” when the yields from wheat could not be sustained. Cheesemakers had come to Wisconsin during the wheat-growing days, though it wasn’t considered a viable career alternative until the wheat market in the state collapsed in the 1850s. By 1899, 90% of Wisconsin farms were involved in the local dairy industry.

With help from the University of Wisconsin and several associations, such as the Dairyman’s Association, dairy farming continued to grow. Immigrants from Germany, Scandinavia, and Switzerland encouraged dairy farming by introducing local cheeses to the economy. By 1915, Wisconsin was producing more cheese and butter than any other state.

#2. The average number of dairy cattle that are owned by a farmer is 146, as of February 2018. (Wisconsin Milk Marketing Board) 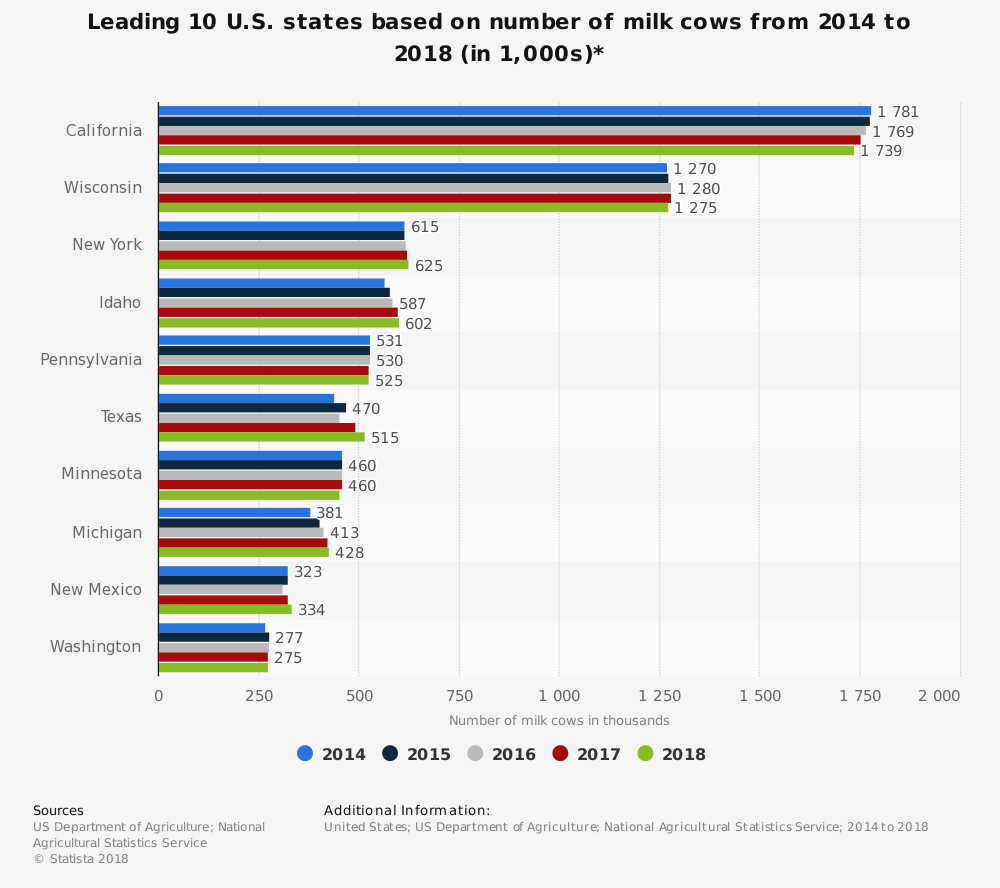 #3. Wisconsin produces about 2.33 billion pounds of milk per month. That places the state in second place in terms of overall milk production, behind California. Wisconsin lost the title of the country’s leading dairy state in 1993, when California overtook the industry to be ranked first in butter, ice cream, milk, and nonfat dry milk. (California Dairy Press Room)

#6. Average milk production per cow in Wisconsin is up by 0.8%, while it is down in California by nearly a full percentage point. (Wisconsin Milk Marketing Board)

#10. Although dairy product consumption is reaching record highs, actual fluid milk consumption is declining at a rapid pace. In 2015, just 155 pounds of per capita milk consumption occurred in the United States. That is 30 pounds less per person than in 2005. (Wisconsin Milk Marketing Board) 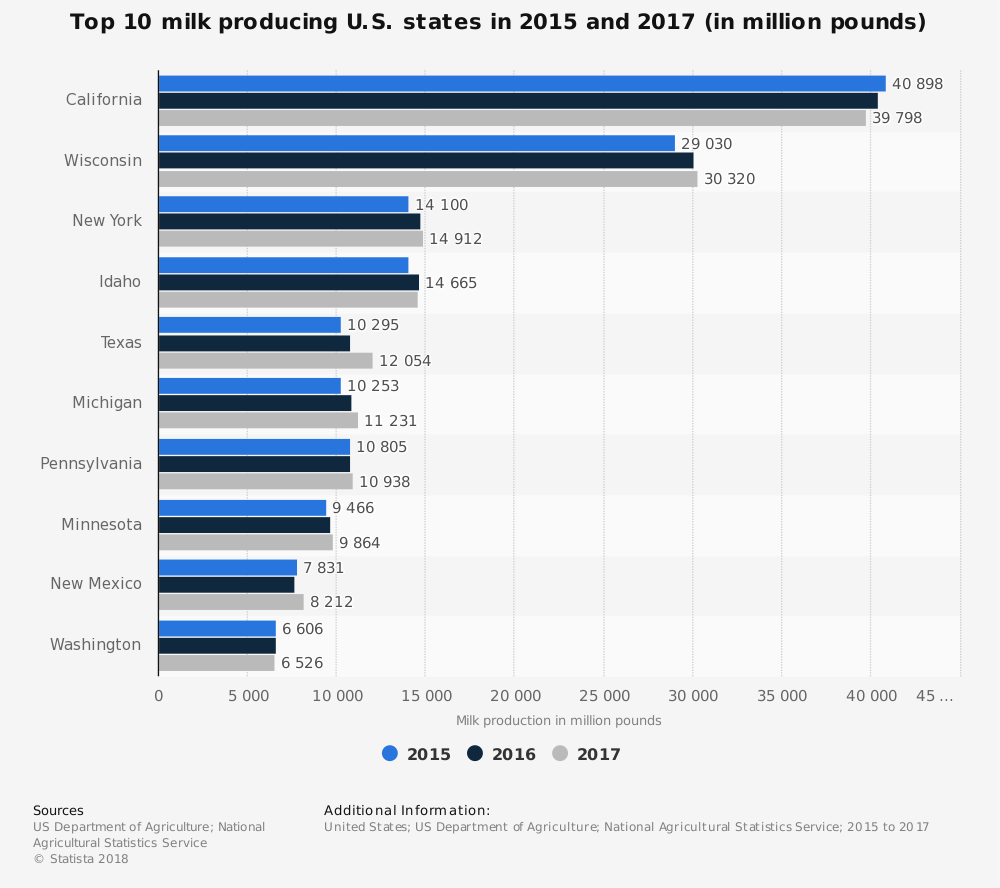 #11. Reduced fat or low-fat milk is the largest segment of the fluid milk market in the United States. The average household purchases 76.6 pounds of this fluid milk product per year. Plain whole milk is the next popular, at 45.4 pounds. Non-fat milk sales average 17.7 pounds per year, while flavored milk drinks average 13.9 pounds per year. (Wisconsin Milk Marketing Board)

#13. Every $1 generated by the Wisconsin dairy industry puts $1.79 back into the state’s economy in other places. (State of Wisconsin Department of Agriculture)

#14. There are more than 68,500 farms located in the State of Wisconsin, with 14.3 million acres dedicated to various farming needs. The average size of a farm in the state is 209 acres. (State of Wisconsin Department of Agriculture)

#15. Agricultural jobs in Wisconsin, which includes dairy farming, are responsible for nearly 12% of the state’s total employment. On-farm production offers direct employment opportunities for about 154,000 people every year. (State of Wisconsin Department of Agriculture)

#17. There are more than 1,200 licensed cheesemakers registered in Wisconsin. More than 600 types of cheese are authorized for production in the state, which is twice as many as California, which is the second-largest producer of cheese in the United States. (State of Wisconsin Department of Agriculture)

#18. More than 3.2 billion pounds of cheese was created in Wisconsin in 2016, including the only location in the country where limburger cheese is produced, in Monroe, WI. (State of Wisconsin Department of Agriculture)

#19. Wisconsin also leads the country in the production of aged cheddar, gruyere, gorgonzola, asiago, and gouda cheese. More than $3.5 billion in agricultural products is exported from the state every year. (State of Wisconsin Department of Agriculture) 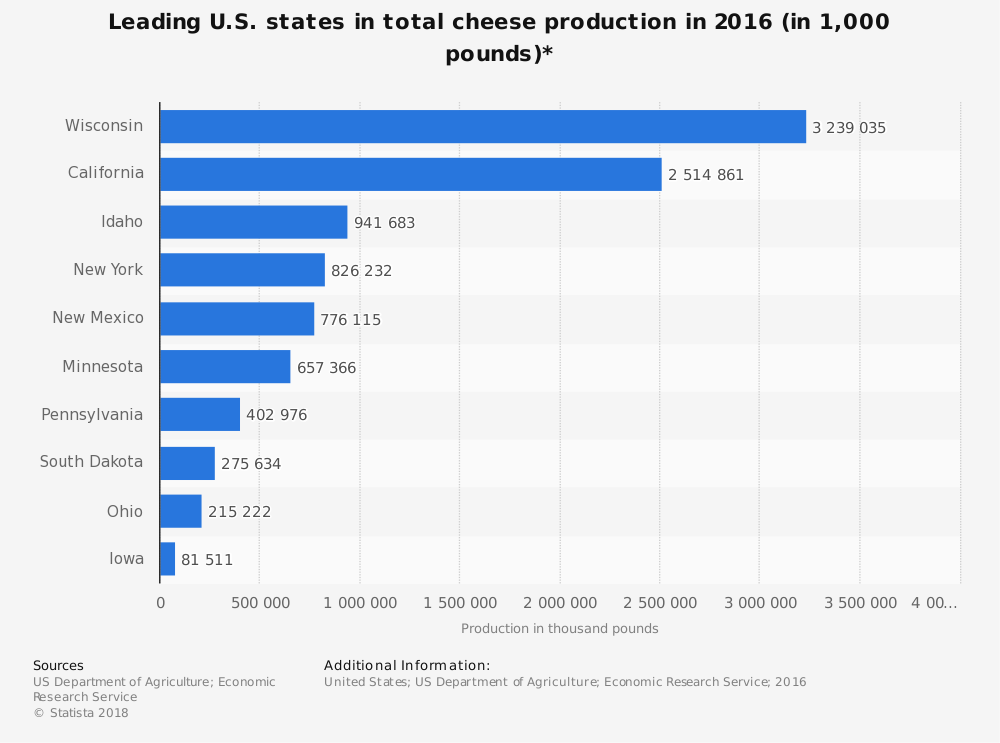 Wisconsin is still America’s Dairyland, although the state has been out-produced in fluid milk products by California for over 20 years. The average herd size between the two states contributes to this fact. The average dairy farmer in California owns more than 1,000 additional cows when compared to the average Wisconsin dairy farmer.

Although the Wisconsin dairy industry is ranked second in several categories, cheese production continues to fuel the state. 25% of the cheese that is consumed in the United States comes from the state. Almost 150 countries receive agricultural products from the state.

Over the past decade, milk production in Wisconsin has increased by over 28%. Cheese production has increased by nearly 30%. If the state were its own country, it would be the fourth-largest cheese producer in the world. The farmers and associated professionals in the dairy industry have generations of experienced behind the work they are doing. This industry will continue to thrive.