Over the past two generations, Thailand has grown to become one of the world’s largest suppliers and producers of natural rubber products. Thanks to the country’s tropical client and access to the export market, the prices for natural rubber have stayed extremely competitive. That makes it possible for the Thai rubber industry to stay competitive despite the size and power of China’s segment.

During the average year, the Thailand rubber industry utilizes 3.5 million hectares of cultivation area to produce 4.5 million tons of natural rubber. Annual growth rates for the industry since 1998 have averaged 5.8%.

Thailand often leads the world in total rubber exports as well. The value of natural rubber exports in 2016 was an estimated $4.4 billion, with 3.6 million tons of product supplied to the global market. China is the largest importer of Thai rubber, followed by Japan, Malaysia, and the United States. 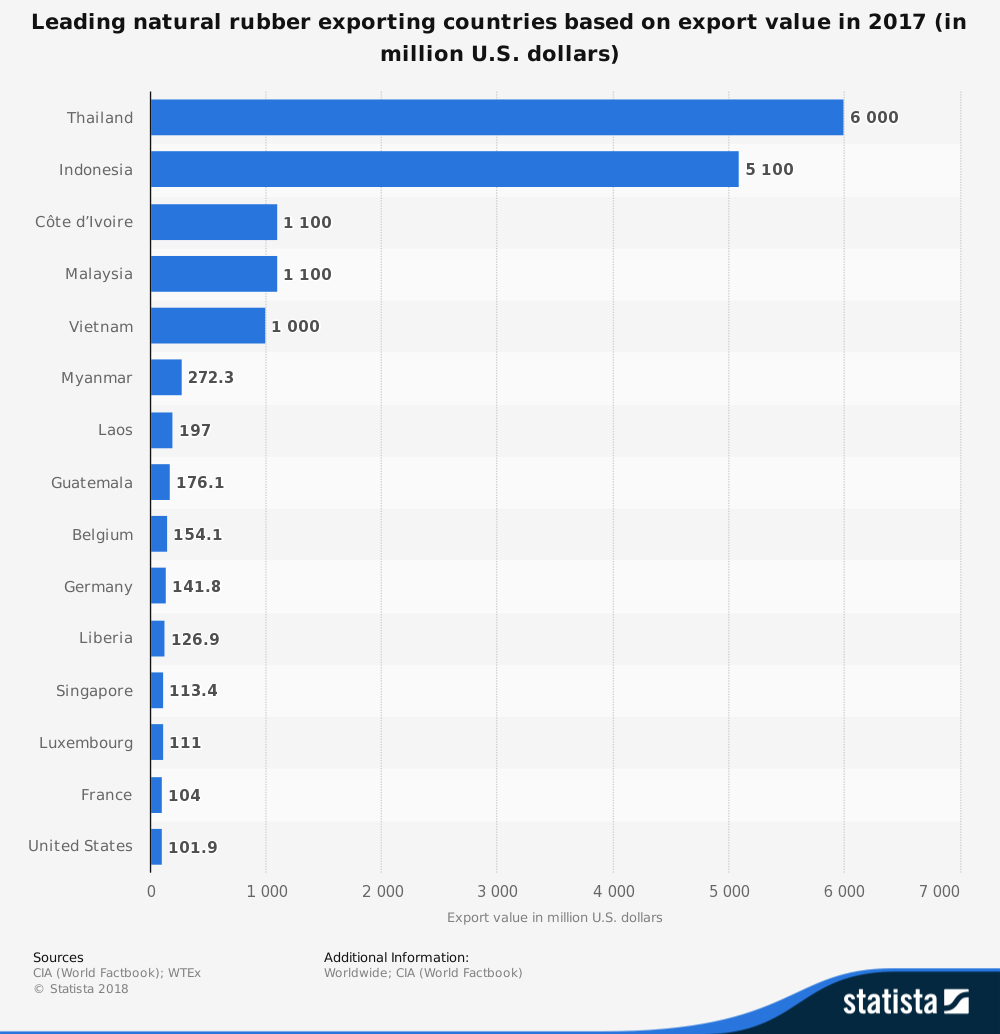 #3. In 2016, Thailand was ranked the third-largest producer of natural rubber in the world, with a total output of 4.5 million tons. That creates a market share for the country of 36.3%. (Report Linker)

#4. The current market for the Thailand rubber industry is valued at $25 billion per year. (Business Insider)

#5. More than 50% of the natural rubber produced domestically in Thailand is used for the local tire industry. Bridgestone, Goodyear, and Michelin all have a presence in the Thai rubber industry, supporting a CAGR which has reached as high as 12% in some years since 2014. (Business Insider)

#7. 7% of the 56% of domestic rubber consumption dedicated to the tire industry in Thailand is used to create motorcycle tubes and tires. (Rubber Authority of Thailand)

#8. In 2015, the total value of Thailand’s imported rubber products reached $1.18 billion. 46% of these products were classified in an “other” category. Vehicle tires were responsible for 27% of the imports, while 14% of the imports were hoses. (Rubber Authority of Thailand) 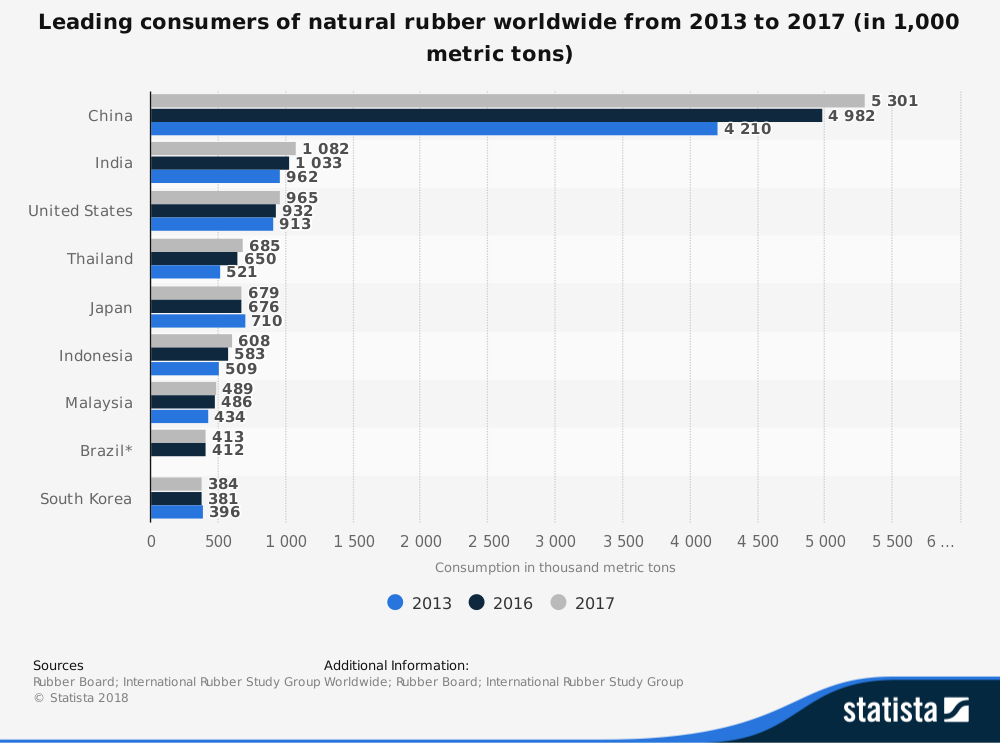 #14. Only 14% of the rubber that is produced in Thailand is reserved for the domestic market. The remainder is dedicated to the export markets. (Krungsri Research)

#16. In 2015, China changed its policies to reduce the use of compound rubber with high SR content. This caused the compound rubber industry to experience a 46% drop in exports from the year before over political maneuvering. (Krungsri Research)

#17. China is the world’s primary consumer of rubber, accounting for 40% of the global market on the average year. Most of the rubber imported by China is used to manufacture tires for vehicles, of which 80% of that market is exported to the United States. (Krungsri Research)

#18. 75% of the world’s rubber output each year is used to produce tires for vehicles. (Krungsri Research)

#19. Since 2011, the Thailand government has helped to subsidize the rubber industry, which has created more rubber planting and a higher production value for growers. (Economist Intelligence Unit)

The Thailand rubber industry will continue to dominate the global market for natural products, accounting for at least one-third of the supply for the next 10-year forecast period. Although synthetic rubber production levels will increase, the consumption of rubber will increase as well during this period, leading to higher demand levels for natural products.

Although rising prices since 2015 have given the industry some hope of a value recovery, 2018 has caused expectations to shift within the industry. Unless there is a radical price shift in December 2018, the industry will close with a lower average than the 45.88 baht per kilogram price achieved in 2015. That limits opportunities for growers, producers, and exporters to make their ends meet.

Excess supply is what is placing a downward price on natural rubber prices, despite the increase in consumption. Although about 200,000 tons were removed from the global stockpile of natural rubber in 2017, there is still over 4 million tons of excess product available to the global market.

There is no question that the rubber industry in Thailand will continue to be a dominant provider of natural products to a world that is consuming more rubber than ever before. The question here is one of value. With prices so low, their products are competitive globally, but it comes at the cost of a healthy margin.