REITs were first created in 1960 when Public Law 86-779 was signed by President Dwight D. Eisenhower. The first REIT, American Realty Trust, was founded in 1961. Since then, 30+ countries have established the legality of REITs as well.

The advantage of REITs is that they allow anyone to invest in portfolios of real estate assets like they could for any other industry. The most common vehicles for investment are mutual funds and exchange traded funds, or ETFs. Shareholders of a REIT then earn a share of the income being produced by the real estate investments without needing to own actual real estate to do so.

REITs are required to pay a minimum of 90% of their taxable income to shareholders. Most REITs will pay out 100%.

#1. The current equity market capitalization of REITs listed on the New York Stock Exchange equals $955.8 billion. There are currently 191 REITs which currently trade on the NYSE. (Nareit) 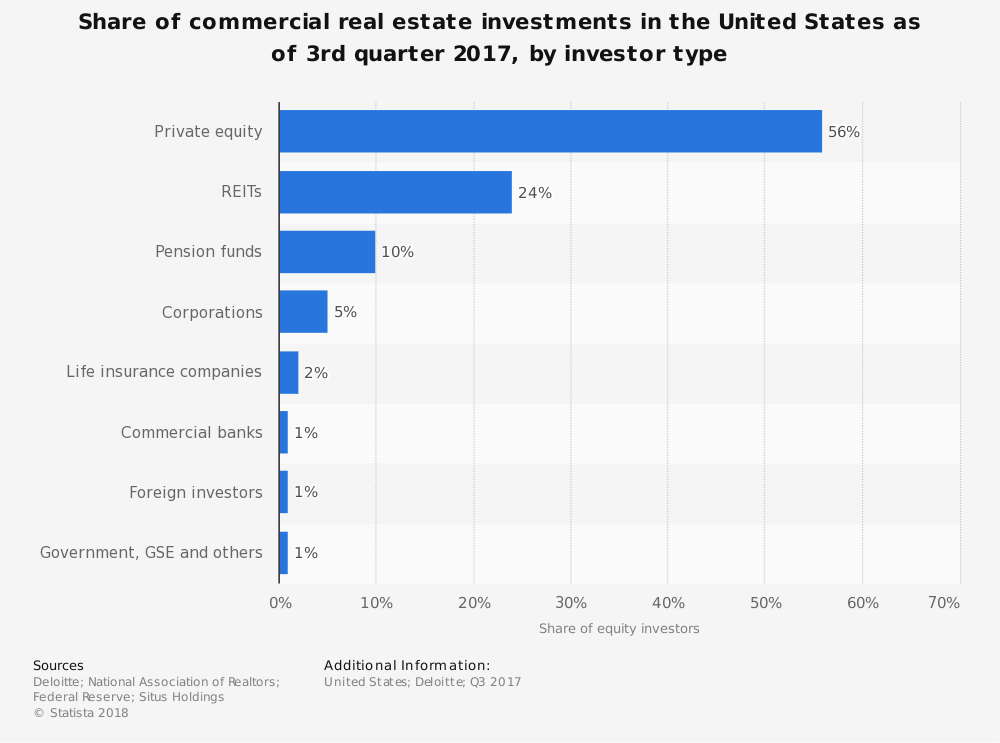 #5. In 2016, REITs generated over $119 billion in labor income, contributing the equivalency of 2 million full-time jobs to the economy in the United States. (The REIT Way)

#6. REITs own more than 200,000 properties in the United States. These properties represent more than $3 trillion in gross real estate assets under current valuation structures. (The REIT Way)

#7. In 2016, REITs, were responsible for almost $53 billion in new construction and routine expenditures while maintaining their existing properties. (The REIT Way)

#8. For the 5-year period ending in 2018, the annualized growth of real estate investment trusts in the United States is 4.7%. When all revenues generated by the industry are calculated, more than $96 billion is generated annually by the REITs industry. (The REIT Way)

#9. As of December 2017, the global REIT index included 477 companies, representing 35 countries, with a total equity market capitalization of around $2 trillion. 78% of this total comes from REITs. (Nareit) 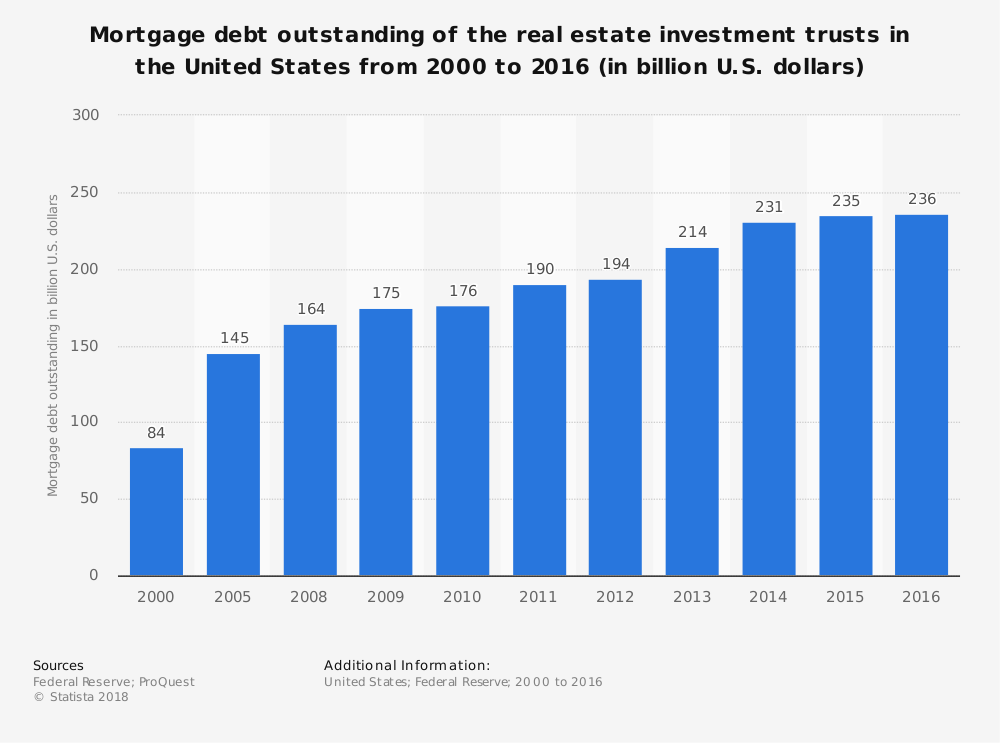 #11. The United States accounts for two-thirds of global REIT market capitalization. With this category, $1.1 trillion of a total $1.7 trillion in REIT capitalization comes through mature funds. (Ernst and Young Global)

#12. In 2015, about $30 billion in equity was raised by REITs. In global markets, excluding the U.S., another $18 billion was raised. In comparison, 10 private equity real estate fund managers raised a collective $50 billion in 2015. (Ernst and Young Global)

#15. REITs must have a minimum of 100 shareholders and have no more than 50% of its shares held by 5 or fewer individuals. (Investopedia)

#16. There are currently over 40,000 commercial properties in the United States that are owned by REITs. More than 300 companies which qualify as REITs are registered with the Securities and Exchange Commission. (Market Watch)

#19. In total, there are an estimated 2,500 firms that are currently operating real estate investment trusts. They are responsible for the direct employment of more than 22,000 people in the United States. Simon Property Group and Host Hotels and Resorts LP are listed as companies which have the largest market share of the REITs industry. (IBIS World)

The advantage of REITs is that anyone can get involved with the advantages of owning real estate without the unexpected costs of owning property. Owning individual properties can be a cumbersome process for many investors. REITs streamline the process, which allows an investor to be conscious of risk while still being able to generate a return.

After passage of the Tax Cuts and Jobs Act in 2017, REITs have several new benefits which make the industry even stronger. They will benefit from the 20% deduction on pass-through entity income and have been excluded from wage restriction.

If you have the time and money to invest, then the diversification and strong income profile of REITs is something to consider. They are often overlooked and undervalued, especially when other markets experience high levels of growth. In 2017, the FTSE Nareit index for REITs generated total returns of 9.27%.

With more than a century of data backing the average return rate, REITs continue to look like a strong investment option.