Despite catastrophic losses in 2017, more than 34 insurance companies saw an increase of 7.8% to USD $371 billion by year end. This is more than a ten percent increase from the previous year. Unexpected investment gains are credited with this growth. Profitability is also heavily reliant on expected and realized investmemt gains.

While 2017 proved to rise above expectations, it was also a third costliest year behind 2011 and 2005 due to three devastating Atlantic hurricanes in the third quarter. These hurricanes are estimated to have causes more than $200 billion in losses with insurance losses reaching $80 billion.

#1. 74% of the assets which are held by reinsurers are in the form of bonds. (Statista)

#2. Swiss Re is the largest reinsurer in the world, with more than $34.2 billion in total equity. Munich Re is another top reinsurer, writing more than $33.1 billion in premiums. (Statista) 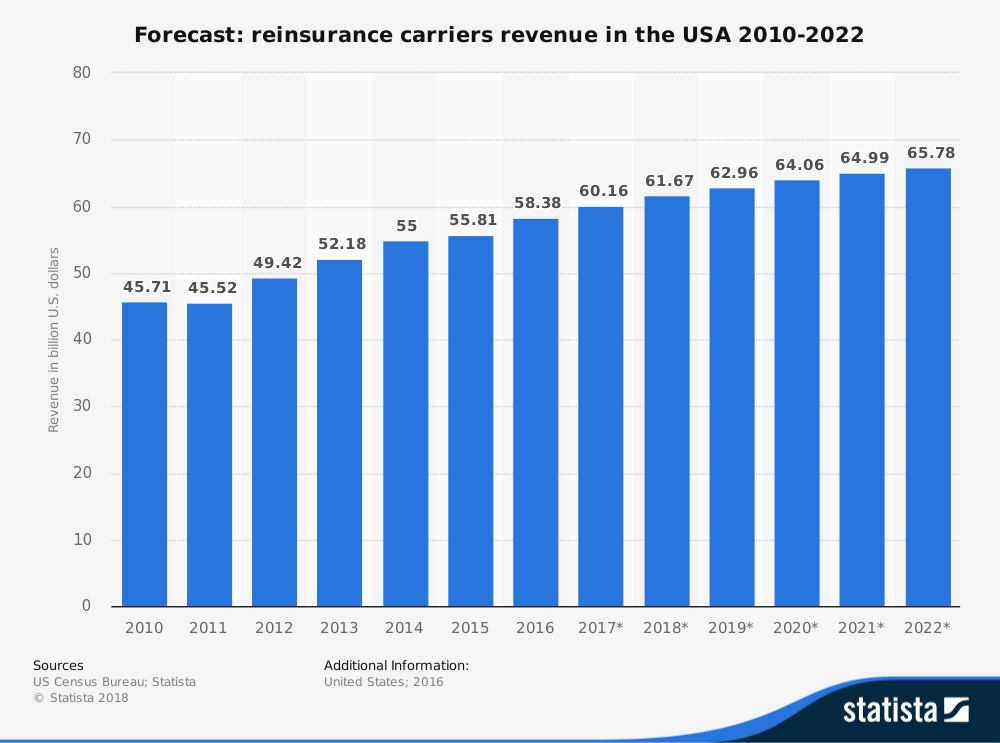 #3. There are about 25,000 employees who work directly for the reinsurance industry in the United States. The leading reinsurer in the U.S., by gross premiums written, is National Indemnity Company. Their policy surplus is currently more than $127 billion. (Statista)

#4. The net premiums written by the P&C reinsurance sector totaled more than $48 billion in the last year. (Statista)

#6. Insured losses, covered in both the private market and government-sponsored programs, totaled $128 billion in 2017. Only 2005 and 2011 had more insured losses which had to be covered. (Aon Benfield)

#7. The insurance recovery ratio, no matter how large the number of covered losses, is historically pegged at 40%. Even in the most developed markets, this recovery ratio is present. (Aon Benfield)

#8. The main driver for losses in 2017 involved the three Atlantic hurricanes which occurred during the third quarter. These hurricanes caused total economic losses of $200 billion, with insured losses reaching $80 billion. (Aon Benfield)

#10. About 90% of the severe weather insured losses which occurred in 2017 happened in the United States, with hailstorms being the primary issue driving losses upward. (Aon Benfield)

#12. From 2011-2015, reinsurance has been the strongest generator of economic profit for the overall insurance industry. During that period, $244 million in profits were generated. Only property and casualty ($27 million) and Brokers ($17 million) were able to achieve profits as well. (McKinsey)

#14. In the United States, there are about 15,000 people employed by reinsurance carriers. These 381 businesses are able to generate about $57 billion in revenues each year. (IBIS World)

#16. Reinsurance carriers in the United States spend about $0.16 on capital equipment for every $1 that is spent on wages. (IBIS World)

#19. The top 2 providers of reinsurance in the world today, with nearly $70 billion in total revenues, account for about 30% of the global non-life and life premiums. When the top 10 providers are accounted for, they are responsible for 67% of total premium volumes. (SCOR)

The only issue which may set the reinsurance industry back from its historical progress toward profit is an oversupply of capital. Almost every single global reinsurance company has worked toward expanding their footprint. Target regions for the industry are Latin America and Asia, along with new local or regional reinsurance companies providing services on a smaller scale.

This has caused three different segments to develop within the reinsurance industry. There are globalists, multi-local companies, and specialists. Many primary insurance companies have also begun to offer reinsurance opportunities, which has led to even more capital being available in the marketplace.

Pricing within the industry has been declining for most lines of business. In the past 5 years, some rate-on-line declines have been up to 20%. Pricing for property catastrophe lines is down by more than 50%.

Pressure is mounting within this industry. If a softer market continues, combined with more disruptors attempting to enter the field, then the profits and growth experienced could decline sharply in coming years. The long-term demand for reinsurance, however, continues to be strong, especially in the P&C category.