Beer is one of the oldest ongoing industries that is currently operating in China. Although beer has dramatically increased in popularity in the past decade within the country, beer has been produced and consumed domestically for at least 9,000 years. Archaeological evidence suggests that villages in China were producing beer products as early as the 70th century BC.

Since 2001, the industry has begun to see growth thanks to a change in regulations. Before 2002, up to 95% of the beers produced in China contained formaldehyde to prevent the products from producing sedimentation while being stored. That practice has now been outlawed.

Several international producers have taken interest in this market, including the creation of joint ventures with local breweries. Craft beer festivals have been popularized since 2010 in Shanghai and Beijing.

#2. The average person in China spends about $41 per year on beer in China. (Statista) 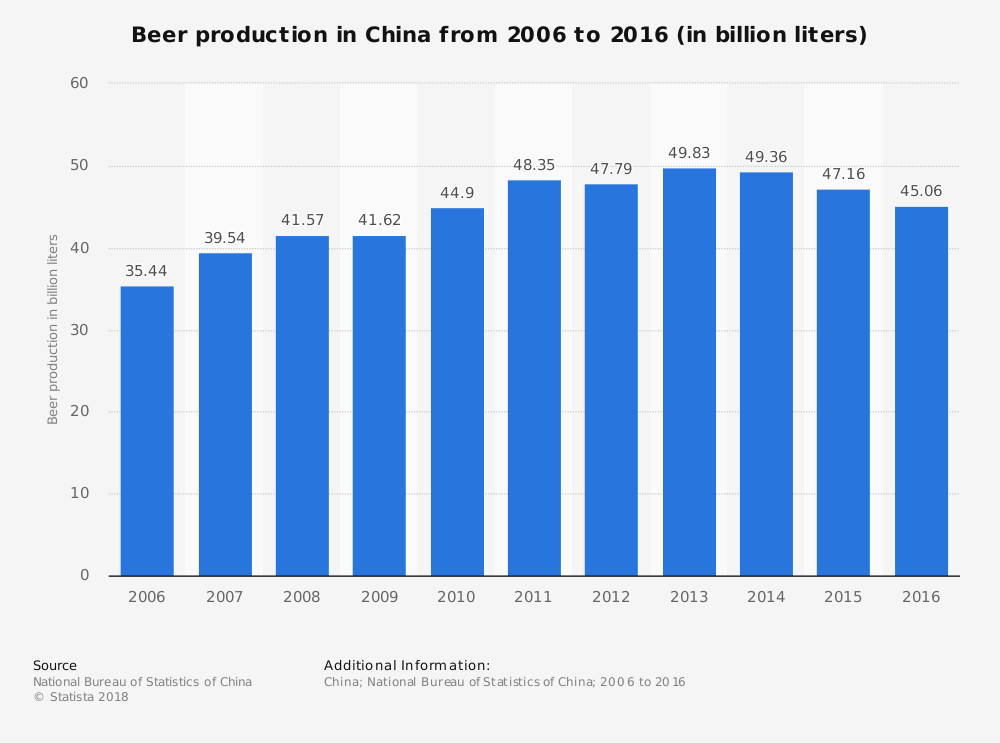 #3. In May 2018, the Chinese beer industry was able to produce about 3.97 kiloliters of beer for consumption. (Statista)

#5. About 1,700 firms are currently engaged in activities for the Chinese beer industry as of 2018, providing direct employment opportunities to over 238,000 people. (IBIS World)

#6. For every $1 that is invested by the Chinese beer industry in labor, about $0.27 is spent on capital. (IBIS World)

#7. Tsingtao holds the largest share of the urban beer market in China, accounting for 30.7% of industry revenues. Snow comes in second, with a 20.8% share. They are followed by AB InBev products at 17%, Yanjing beer at 7.8%, and Carlsberg at 2.8%. (EastWest Bank)

#8. About 40% of the beer that is consumed in China each year is imported, although just 2.5% of American craft beer exports in 2017 were destined to reach Chinese consumers. (Financial Times)

#9. 90% of beer consumers in China are drinking industrial beer products, making it the largest beer market in the world today. (EastWest Bank)

#10. Alcohol consumption in China has been above 50,000 million liters since 2010. The vast majority of the alcohol consumed in the country is beer. Despite the high levels of consumption, revenues from beer sales are a small fraction of spirits sales. (Statista) 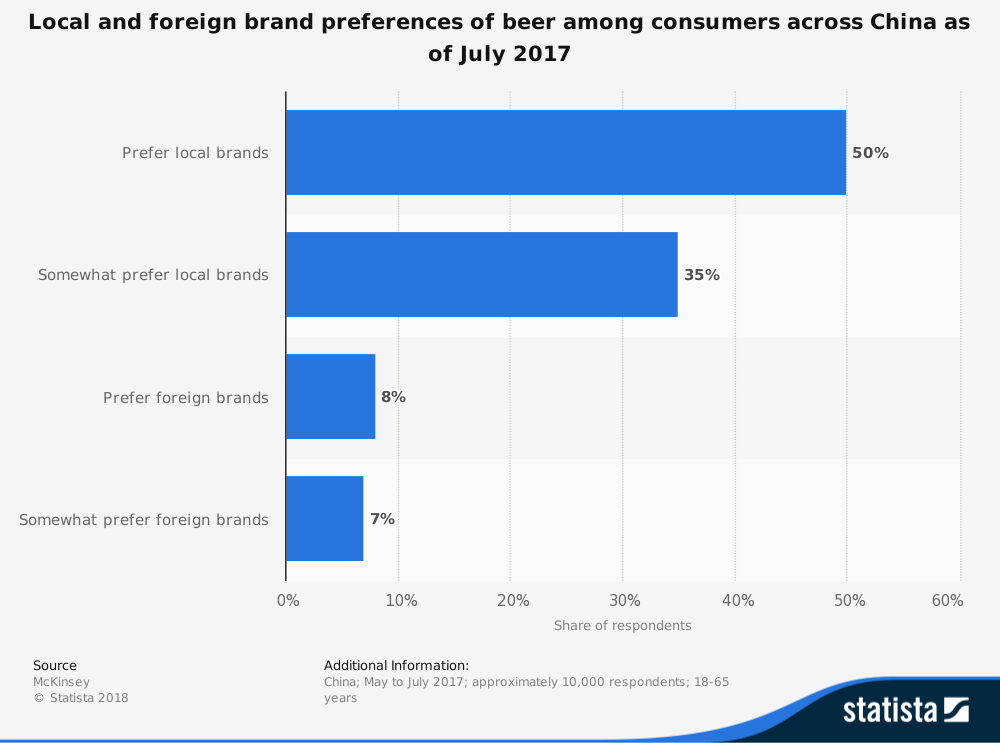 #11. In 2016, domestic production of beer reached 45,060 million liters, which was the lowest level achieved by the industry since 2010. About 646 million liters of beer was also imported to the country that year. (Flanders Investment and Trade)

#12. 70% of the total imports that come into China to support the beer industry originate from Europe. Germany is the leading provider of imported beer, with over $209 million of product in 2017. Mexico comes in second, providing $110.7 million in beer products to China. (China Customs)

#13. Just $9.2 million in beer products are imported from the United States by the Chinese beer industry. Part of the issue with U.S. beer is its cost, which has the highest average price, at $2.16, in the country. In comparison, German beer has an average price of $0.82. (China Customs)

#17. Brewdog is the most successful craft brewery in China, selling 20.000hl in 2017. (Flanders Investment and Trade)

#18. Revenues at China Resources, which is responsible for the Snow brand, fell by 2% to RMB 15 billion in the first half of 2015. Snow is the world’s largest beer group in terms of total sales volume. (Financial Times) 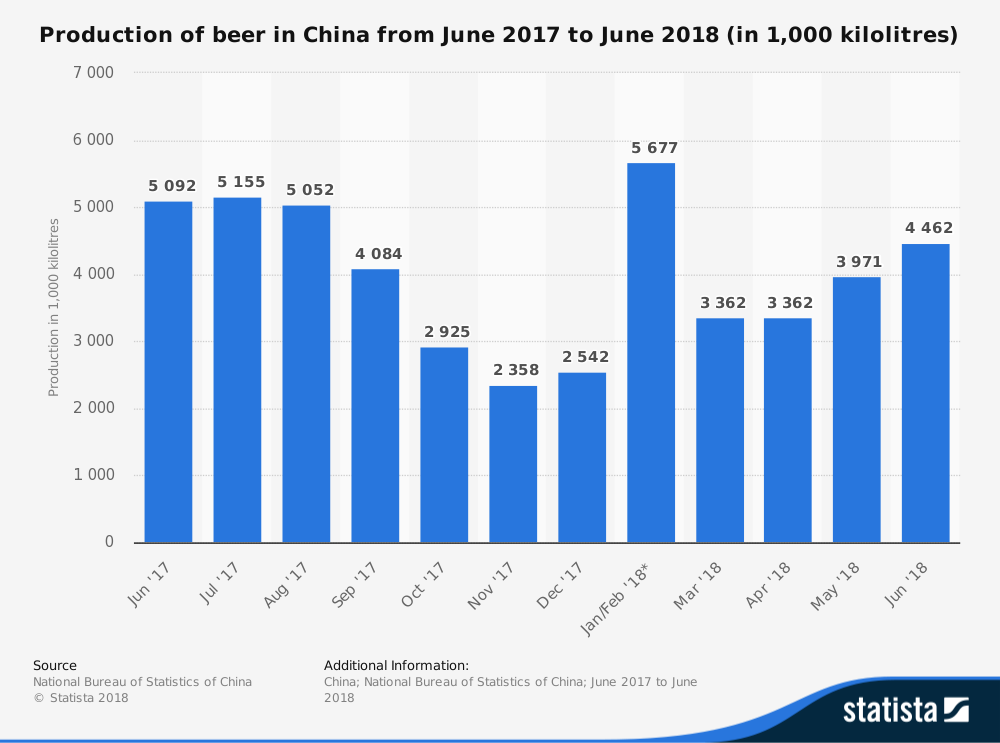 The Chinese beer industry is currently going through a series of transitional phases as consumers shift their preferences. At the moment, imported beer is just 3.6% of the current market in terms of sales in China. As consumers seek out better beers and are not satisfied by what domestic brands are able to offer, the import share of the industry is expected to continue rising.

European breweries are expected to take the lion’s share of the increase in import preferences, with Germany leading the way. Some brands may follow the lead of Carlsberg by establishing domestic operations through partnerships and foreign direct investment to counter this move.

Look for Chinese producers to seek out methods of producing higher quality beers in the next 5-10 years to compete with imports as well. If they can produce a high-quality craft beer, the preference of Chinese consumers will be to stick with their local brands. That would shift the industry in the other direction.

At the moment, domestic producers are seeing dramatic declines in sales, while imports are seeing somewhat static sales. As more retail outlets offer premium beer products, the industry in China should recover. It may just take a few years to get there.