Until the end of the 19th century, the Texas dairy industry was a subsistence-type of business. Farmers milked their livestock as a way to offer food products to their families. Even homeowners in towns kept cows to have fresh milk, butter, and cheese available to them. It wouldn’t be until after World War II that the dairy industry began to build up to large-scale operations.

Even with its influence on the national dairy industry, Texas focuses more on the production of mellorine than on butter and cheese. The state produces about 50% of the total mellorine used each year, supporting the largest ice cream manufacturing industry in the United States.

Three counties in Texas represent 30% of the milk products that are available each year: Hopkins, Erath, and Wise. 16% of the dairy production in Texas is based in Hopkins County alone.

When the figures are combined for the Texas dairy industry, it is responsible for about 5% of the total milk production in the United States. 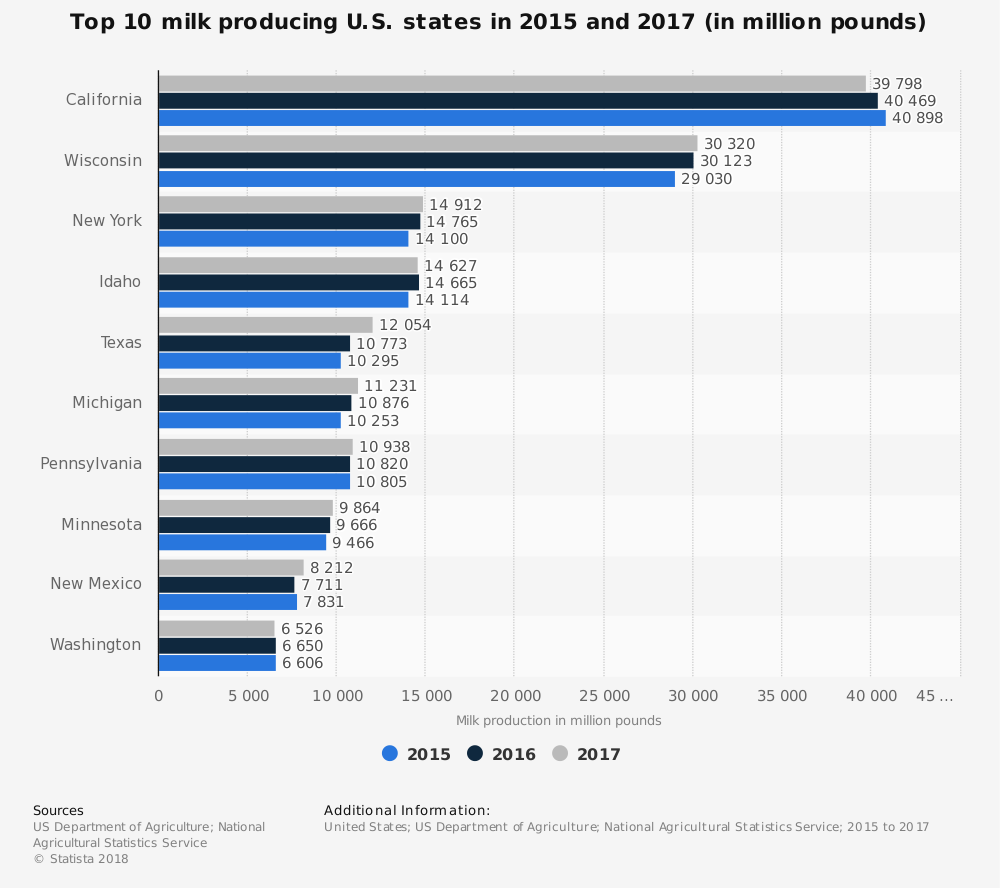 #4. Dairy activities within the state have shifted from the northeast to the panhandle. Before 1950, over 200 dairies were operating in Dallas County. Today there are none. 68% of the state’s milk production now comes from the panhandle after 1% was reported in 1980. (Texas A&M University)

#5. Dairy facilities increased their production by 9% in 2017, reaching a total of 12 billion pounds of milk in the state. (Texas A&M University)

#6. Over 95% of the dairy farms operating in Texas are family-owned and operated. Because the panhandle receives 50% less precipitation than East Texas each year, the process of expansion was much more comfortable for farmers in the new region. (Texas A&M University)

#7. Cows eat up to 100 pounds of food per day while drinking about 35 gallons of water. That allows each cow to produce an average of 6.3 gallons of milk per day, or about 2,300 gallons per year. (AgAmerica Lending)

#8. The Texas dairy industry contributes milk to over 300 different varieties of cheese produced in the United States, but the most popular option remains cheddar. (AgAmerica Lending)

#9. There are more farms in Texas than any other state when ranches and non-dairy operations are counted together. About 249,000 of them, which cover over 130 million acres, are currently producing agricultural goods for the state. That means Texas also leads the U.S. in the value of farm real estate. (Texas Department of Agriculture)

#10. 14% of Texans are working in an agriculture-based position. There are more women and minority farm operations in the state than any other in the United States. (Texas Department of Agriculture)

#11. The average age of a rancher or farmer in Texas is 58. (Texas Department of Agriculture)

#12. Over $100 billion in economic impacts are generated each year because of the farming and dairy sector. Cash receipts from all farming activities average $20 billion per year. Milk contributes $1.8 billion of that figure, while cattle contribute $10.5 billion. (Texas Department of Agriculture)

#13. $248 million in milk exports come from the Texas dairy industry each year. That ranks the industry as the sixth-largest in the country. (Texas Department of Agriculture)

#14. 80% of the top dairy counties in Texas are currently located in the Panhandle. Expansion of the industry is expected to continue at 1% to 3% each year over the long-term. (Farm Journal)

#15. There are 250,000 milk cow replacements for the Texas dairy industry classified as heifers at 500 pounds or over. That figure declined by 10,000 head from the year before. (U.S. Department of Agriculture)

#16. Over 2.6 million cattle are listed as being on feed in Texas for 2018, a 9% increase from the year before. About 45% of those cattle are either current or future milk producers. (U.S. Department of Agriculture)

#17. Pasture conditions are steadily improving in Texas, with over 75% reported in either “fair,” “good,” or “excellent” condition. Pastures rated as “poor” have increased, however, climbing to nearly 25% by October 2017. (U.S. Department of Agriculture)

The Texas dairy industry continues to move west as water resources become less available. In the 1980s, estimates suggested that the water would last for 30 years. With a switch to sorghum-based feeds, because they take less water to grow than corn or other grains for the dairy cattle, farmers in the north are still thriving. Since 2000, rapid expansion has seen growth rates exceed 10% in several years.

That growth will not be as extensive in the future. Droughts have affected the state in several areas, creating negative impacts on the dairy industry. 70% of the state is classified as being in drought conditions, with 21% of the land in either “exceptional” or “extreme” status. Despite the weather pattern difficulties, the reservoirs in the state are still two-thirds full.

If the weather decides to cooperate, milk production levels will continue to rise in the state as farmers adapt. Even family farms are looking to expand employment opportunities, creating operations they can oversee while maintaining a semblance of “normal” life. That bodes well for the industry as a whole, helping it to maintain its Top 10 status as a U.S. milk and dairy products producer.