Machine tools are used to machine or shape metals or other rigid materials by grinding, shearing, cutting, or boring. They are designed to constrain the piece being worked, providing the user with guided movement through the cutting parts of the machine. Unlike in previous generations, most machine tools today are powered through hydraulic, electrical, or line shaft technologies.

There are new and used segments found within the machine tool manufacturing industry. Since February 2016, when new and used units were separated by only 10 financing units, there has been a marked increase in the number of new units sold over used units. In December 2017, the gap between the new segments was almost 1,000 financing units.

Trumpf is the largest machine tool manufacturing in the world, producing $2.93 billion in revenues for the year. Shenyang Group in China earned $2.78 billion, while Amada in Japan earned $2.55 billion. Haas is the top primary U.S. manufacturer with $967 million in revenues, though MAG, which has units in Germany and the U.S., earned $1.25 billion.

#1. The machine tool manufacturing industry in the United States reached its all-time high on the Gardner Business Index in February 2018 with a score of 61.3. In 2017, the industry averaged a score of almost 56. (Gardner Intelligence) 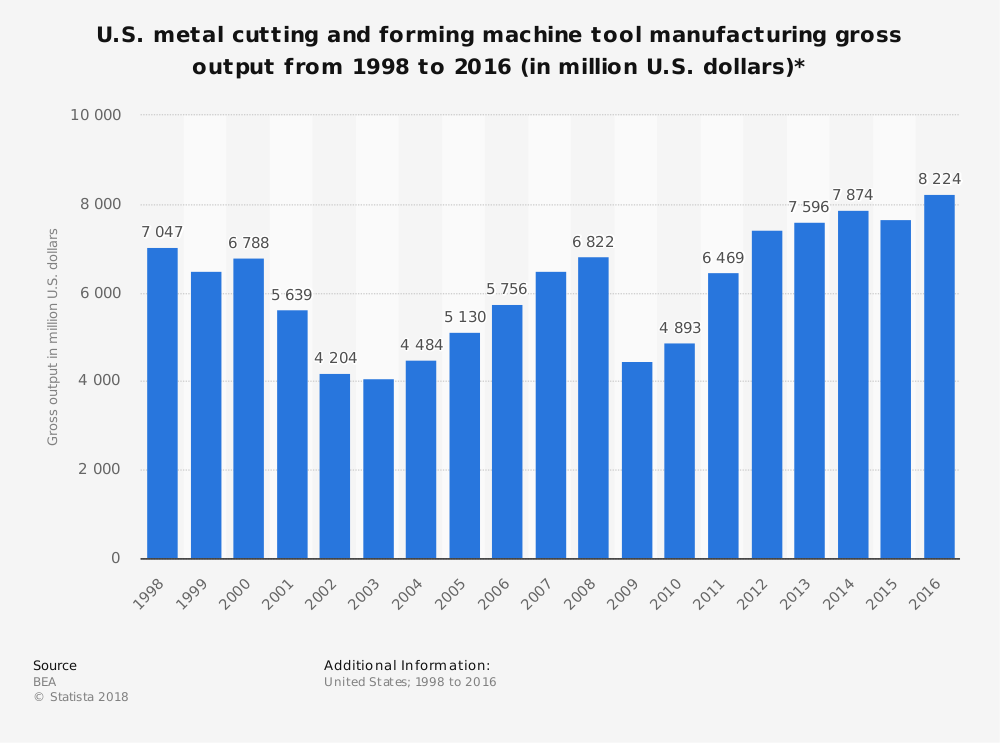 #4. 12 of the top 15 countries which consume machine tools saw a boost to their consumption rates from the previous year. Since 1980, there have only been six other years where such an event occurred, and before 1980, it had never happened for the industry. (MMS Online)

#6. The U.S. increased its imports by 10% within the machine tool manufacturing industry in 2017. The top five machine tool producers outside of the United States and China boosted their exports to China by $192 million while reducing exports to the U.S. by $126 million. (MMS Online)

#9. Gross output in the United States reached its highest revenue rates since at least 1998 with the 2016 data that was released. For the first time, the gross output topped $8 billion, reaching a total of $8.22 billion. Since 2012, the industry has managed to exceed the $7.04 billion in total output that was achieved in 1998. (Statista)

#10. Machine tool consumption in the United States continues to be lower than its peak in 2012, when the value reached $8.835 billion. (Statista) 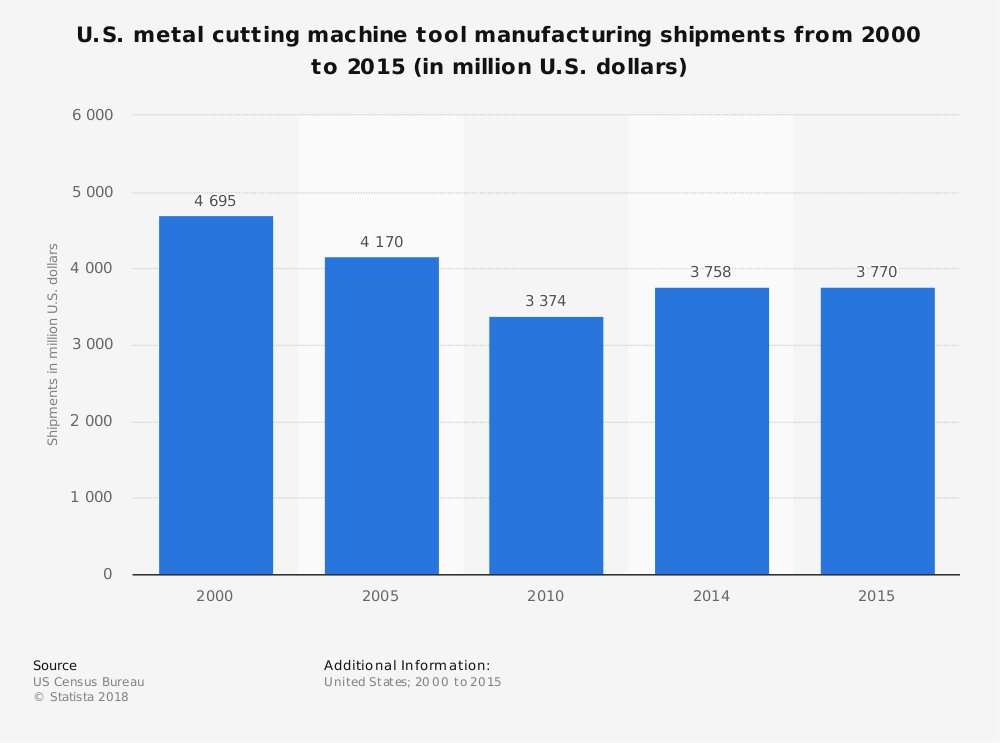 #11. U.S. orders for machine tools peaked in March during the 2017 year, reaching $24.05 million for the month. For the year, the industry averaged about $14 million per month for metal forming and fabricating machines. (Statista)

#12. The Asia-Pacific region is responsible for more than 60% of the global decline experienced by the machine tool manufacturing industry, with their consumption levels dropping $6.7 billion in 2015. (Gardner Intelligence)

#13. 15 countries from the EU-28 posted increased consumption levels in 2015 compared to 2011 figures. With the declines experienced by the other 13 nations, total consumption for the industry has remained flat on a yearly basis. (Gardner Intelligence)

#15. The global production of machine tools declined by almost 12% in 2015, with Asia being the only region where the decrease was lower than the world total. (Gardner Intelligence)

#16. Since 2011, Mexico has made the largest move up in the rankings of the top 20 of nations which consume machine tools. It rose from 12th in the rankings to 7th. Brazil has fallen the most, moving from 8th to 19th over the same time. (Gardner Intelligence)

#17. Kazakhstan saw the steepest declines of consumption in 2015, losing over 75% of its market value in just one year. Chile lost over 62% of its market, while Israel lost over 57%. Iran was removed from the rankings because of ongoing sanctions, so their 100% loss is not counted. (Gardner Intelligence)

Forecasts suggest that the machine tools market will exceed $120 billion by 2020 because of a consistent CAGR of 6%.

With automation creating positive revenue impacts for the industry, the individual sectors with wide-scale implementation will see the strongest gains over the next 10 years as artificial intelligence helps to reduce labor costs while boosting overall production. Look for the automotive industries, aerospace, defense, and electronics to keep pushing the machine tool manufacturing industry forward.

The implementation and integration of 3-D printing technologies with machine tools with improve production capacity in the future also. Continued innovation within the sector will consolidate top industry producers, increasing their overall influence on the global market, while the rest of the world struggles to catch up.

The United States and China will continue leading the way, comprising up to 50% of the market value that the machine tool manufacturing industry is able to achieve.