The aircraft industry in Japan is an interesting group of providers. Although many companies involved in the industry today have more than 100 years of manufacturing experience, many of them didn’t start making aircraft or airplane components until after the conclusion of World War II.

Kato Manufacturing, one of the manufacturing giants within the industry, got started by making farming tools.

Part of the issue that the Japan aircraft industry faces is due to the fallout after the war. The country was banned from making planes at the conclusion of the war, completely eliminating the industry. Prohibition was lifted decades ago, except the industry has never really been able to fully recover.

When there were commercial aircraft built, such as the YS-11, they were not successful. That caused the industry to suffer even more setbacks.

#2. Airframes and related parts or accessories saw an increase of 32 billion yen. This part of the industry represents 61% of total aircraft production in Japan. (Society of Japanese Aerospace Companies) 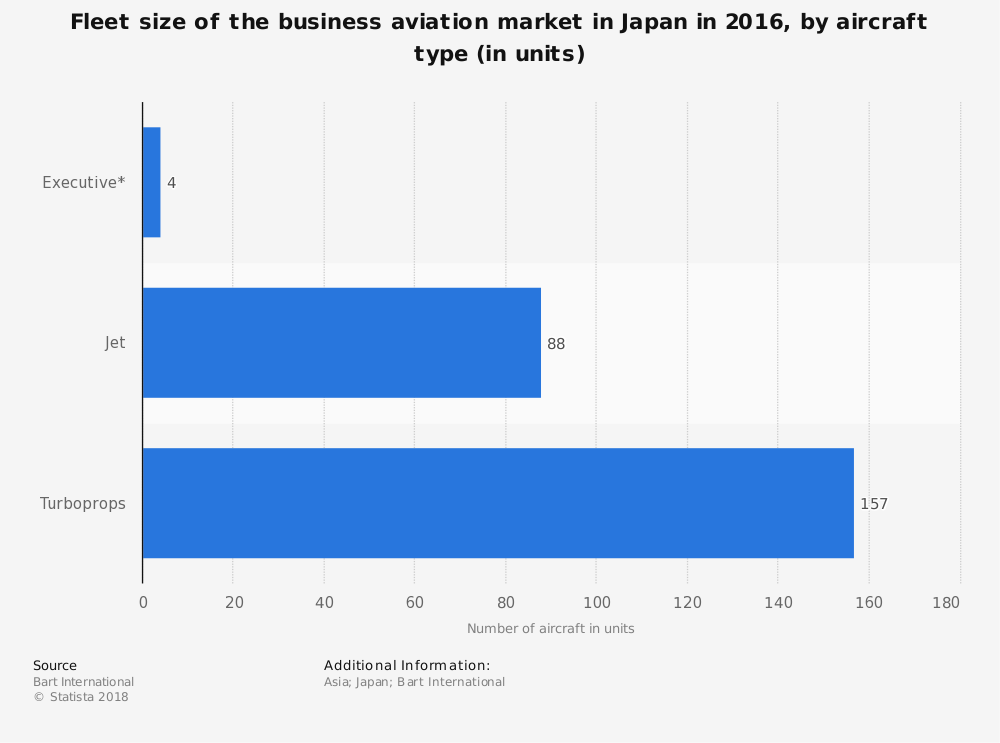 #4. The total value of civil aircraft exports in 2015 was 950 billion yen. About 53% of total aircraft production within the industry is directed toward the export market. (Society of Japanese Aerospace Companies)

#5. The United States provides the greatest turnover for the Japanese aircraft industry, reaching almost 2.8 trillion yen in 2015. The European Union came in second, with a turnover of nearly 2.2 trillion yen. (Society of Japanese Aerospace Companies)

#6. The Japan aircraft is a 35% partner with the Boeing 787 project, participating in center wings and front fuselage. (Society of Japanese Aerospace Companies)

#7. Japan is the fifth-largest manufacturer of helicopters in the world today, headlined by the OH-1 light observation helicopter, which fully developed domestically. (Society of Japanese Aerospace Companies)

#8. 60% of the components found in the Mitsubishi Regional Jet project are supplied by companies that are based in the United States. (U.S. Department of Commerce)

#9. The industry has achieved a 96.3% launch success rate with their H-IIA launch vehicle #23, helping to expand the space segment of the industry in total value. (Maine International Trade Center)

#10. According to figures last updated in 2012, there are currently 35,000 people employed by the Japanese aircraft industry. About 8,000 of the job opportunities are directly linked to space-related activities. (Maine International Trade Center)

#11. Defense-related projects now make up less than 50% of the total sales that are generated by the Japan aircraft industry each year. (Maine International Trade Center)

#12. In 2012, 15 countries were responsible for over 70% of total U.S. aerospace exports. Japan was the leading export market, with $8.4 billion in goods received. 8% of U.S. exports go to Japan. China and France are at similar levels. (U.S. Department of Commerce)

#13. The Japanese aircraft industry is a 23% program partner on the A320 neo engine, responsible for developing components like low-pressure shafts, fans, and compressor modules. (Society of Japanese Aerospace Companies)

#14. Japan exported over 954 billion yen in aircraft components in 2015, while importing over 1.3 trillion yen. (Society of Japanese Aerospace Companies)

There are many challenges that the Japan aircraft industry must face in coming days. For several decades, the industry was reliant on defense spending and military contracts to generate revenues. The last passenger aircraft that was manufactured in Japan was released more than 40 years ago, right at the beginning of the jet engine era for the industry.

Japan has never produced a civilian jet plane. They do have some experience assembling military models.

For the industry to be successful, it must first be able to compete with low-cost competitors in China and Russia. Boeing, Bombardier, Airbus, and Embraer all have a tremendous hold on the passenger jet segment of the global industry. This has created mixed results for those in Japan who want to see their nation become a manufacturing giant once again.

Over $1.5 billion was underwritten by the Japanese government to help in recent development costs. No competitive products are currently on the horizon from a civilian standpoint, which means parts manufacturing and engine components will still be a point of emphasis for revenues.